Karl is the latest to join in on the army building fun.

As you may be aware, Warlord Games had temporarily suspended shipping orders while we took a step back to ensure we are doing everything possible to safeguard our staff and the public in the wake of the COVID19 situation.

That being said, I (like many hobbyists I’d wager), took a deep look inside myself (and at my shelf of shame) and vowed to put this time to good use!

I came to a rather rapid realisation that Germans are the way forward for my next project as I had 2 German Grenadier boxes and an Opel blitz lying around. This, with some cobbled together armour (a Puma and a FlakPanzer), sees me well on the way to creating a new 2000 point list that would work well in a late war setting on either the Eastern or Western front.

It is worth pointing out I am not a very good bolt action player. That is to say I don’t win very often, so I wanted to try and make something a little beefy and really put some thought into it.

I began with the infantry, which win almost every game. Every squad is maxed out on model count, with just the weapon loadouts varying.
The two compulsory squads are entirely rifle squads with two LMG teams. These will act as my fire support teams and create a good baseline of long ranged fire while my three other squads move up.

My third and fourth squads are armed with 7 SMGs and 3 rifles. These squads are my shock troopers, short ranged, aggressive, and mobile. They each also have 4 panzerfausts. My theory here was that they will be furthest up the board,  so likely to be in range of enemy armour (and you can always shoot infantry with them if no other target presents itself).

My final squad is an assault rifle squad with one panzerfaust (I had some points left over). This will be my strategic squad. Decent enough range to cover an area of importance, but mobile enough to react to the battle when needed. I see this squad being in the area of key objectives as it can keep an enemy at range but also be very punchy in close quarters.

With the infantry out of the way, I looked at my support elements.

I went for a veteran Second Lieutenant with an additional man, both with assault rifles (because why not) as the HQ choice. I always forget to use the Snap To rule, so I decided against over-investing in additional actions. To Round out my HQ options, I add in a medic and an Artillery observer.

For my teams, I went with a medium machine gun team which I will use to garrison key positions or deprive the enemy of movement in a long range kill zone.

I also took on a medium mortar with a spotter, as it’s a great way to convince your opponent to move units they don’t want to move.

A sniper team will keep the enemy teams at bay (hopefully), and lastly a PanzerShrek team to ward off any armoured units that stray too close.

For my armour I had two things in mind when making my selection. Firstly, that I have a lot of points invested already in my anti-tank ability (Panzerfausts and a Panzershrek team), so I didn’t need anything too punchy. Secondly, I wanted to ensure that my assault groups could take advantage of transports where possible.

For my two SMG squads, I took a 251 halftrack and an Opel Blitz with MMG. These will offer some protection from fire, but also the ability to get them up and into position. In the case of the Opel Blitz, a 12 inch advance order, then a further 12 inch run gets me half way up the table on turn 1, which will likely be on top of an objective. The same can be said of the 251, but reduced to 21 inches total move (halftracks move slower than trucks).

Lastly for my list, I decided to go with something that could deal with a wide range of threats. I decided on the 270 point FlakPanzer Wirbelwind. It has 4 light auto cannons letting off 8 shots total of HE1 or +2 penetration each round, with a hull mounted machine gun also. This makes it great at shooting up infantry in the open, anyone occupying buildings, soft skinned vehicles and if it needs to, armoured targets, though it would need to be a lucky shot!

So, with the list concluded, I set about building up my force. I had to make some serious creative decisions as in isolation I didn’t have access to the specific models, so some kit-bashing was in order.

Once I pulled my list from the printer, I starting looking at things I didn’t have and think about ways in which I could make them at home.

The sniper team pictured below is actually a prone Blitzkreig German model (the only prone guy I had), and because I didn’t have the required firing arms for his Russian sniper rifle, I added a bipod first stability. I think it looks okay. 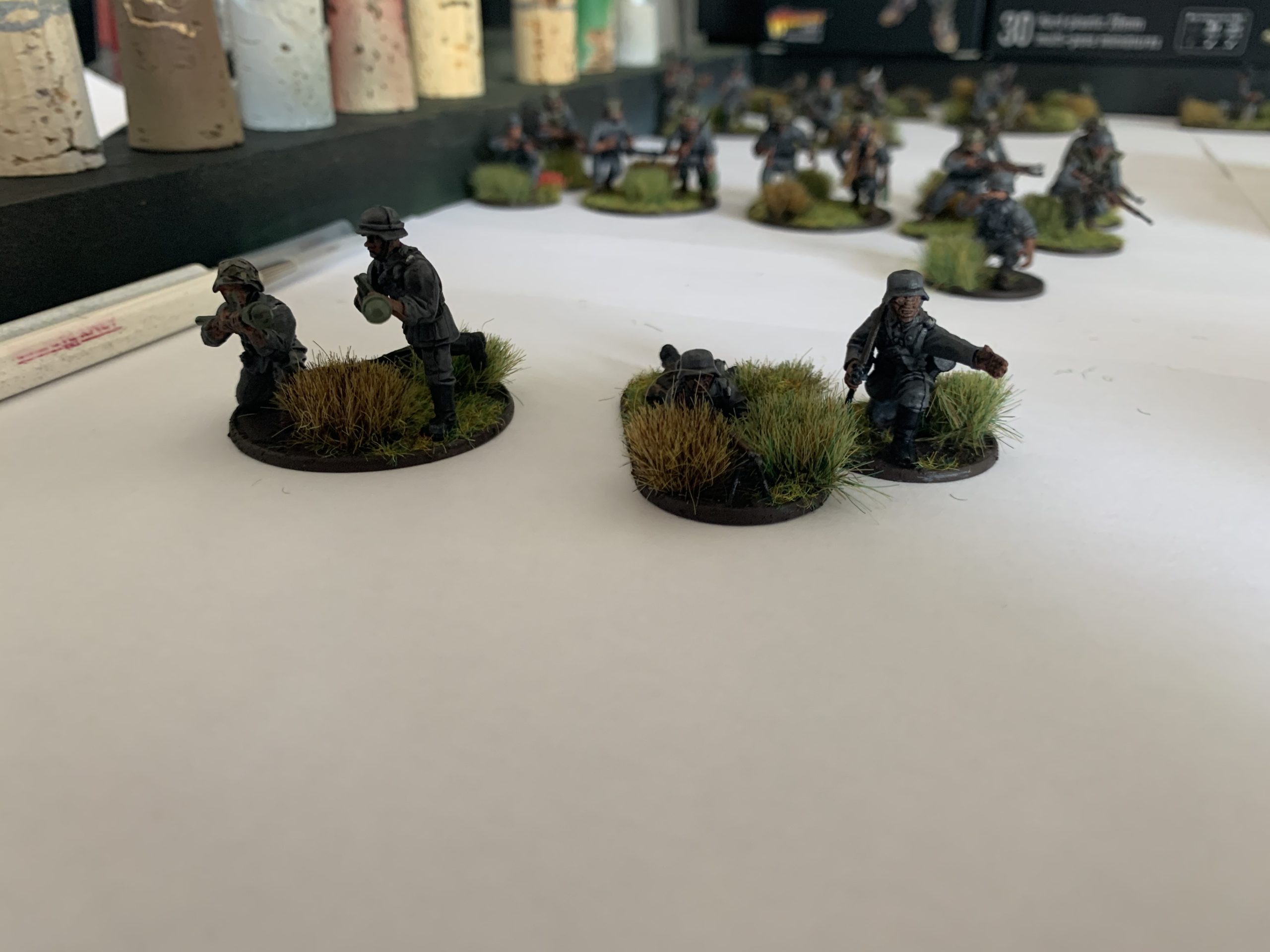 Similarly I didn’t have any of the Warlord produced PanzerShreck teams to hand. I wondered about using some plasticard and snips to doctor an American bazooka into the right shape, but I ended up diving into my Russian bits box once again, where I found a load of Panzerfausts. The pictured team below is my ‘counts as’ PanzerShreck team, which is two blokes with Panzerfausts on one base, with a pile of new rockets behind them ready to go at a moment’s notice. I like to think it goes with the ‘late war, we have no stuff’ theme. 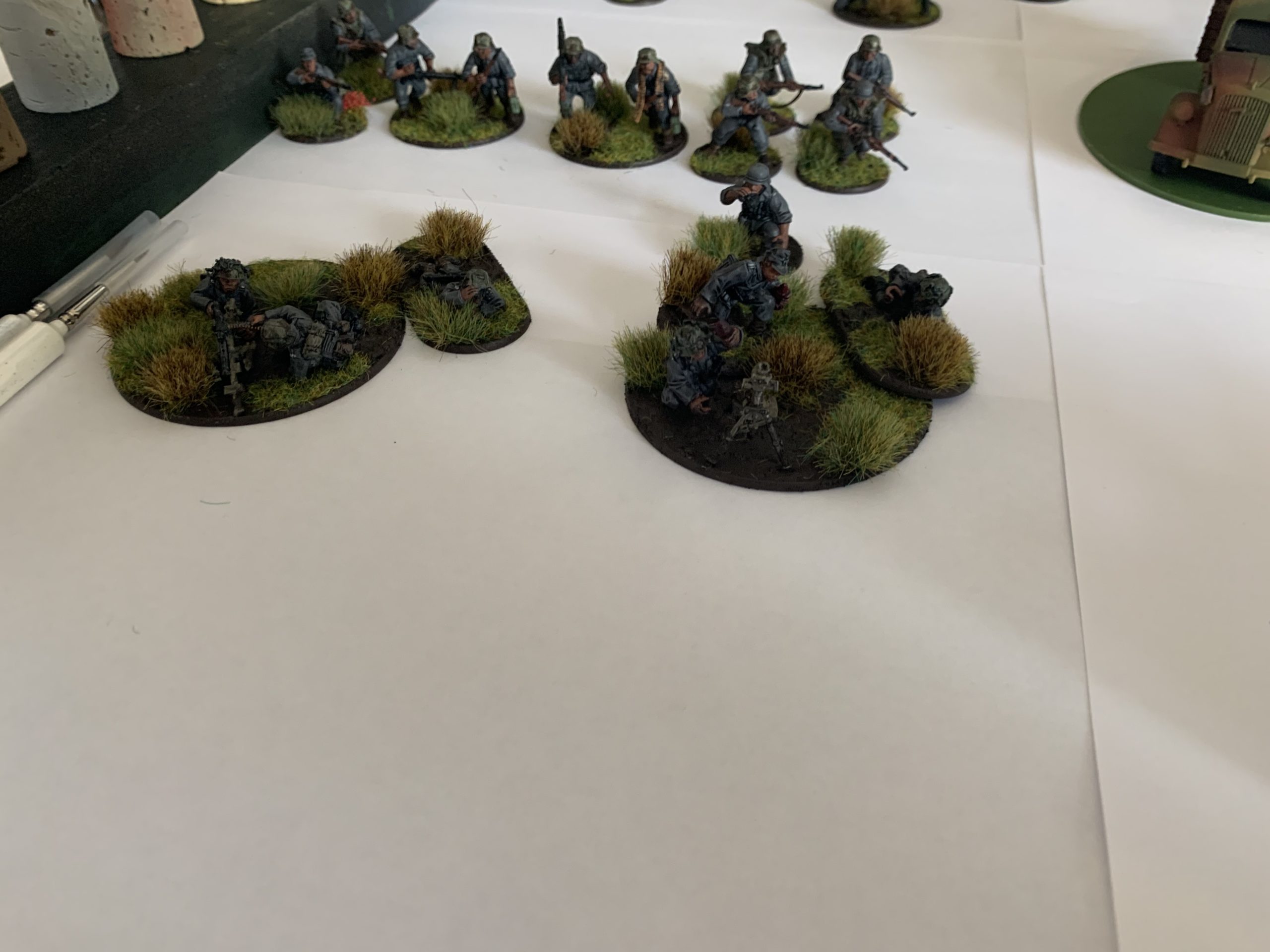 When it comes to painting, I am admittedly a lazy painter. I don’t struggle painting things, but I am renown for starting projects and never finishing them. To combat this, I need the easiest paint job with the least steps, whilst also allowing me a little dignity in putting them on the table.

I looked up some tutorials online (Pete the wargamer does an excellent tutorial here: https://www.youtube.com/watch?v=SxlzdwEq02M&t=2s), and decided on a mix of schemes.

The German grenadier box is very versatile in the sense that it comes with guys in standard grey uniform and guys in the camouflaged poncho. Both however wear some form of Grey uniform. I broke out the bluetac, stole a shelf out of one of the kitchen cupboard and went to town on everyone with an Army Painter Uniform grey primer. Hey presto, my army is 80% done. 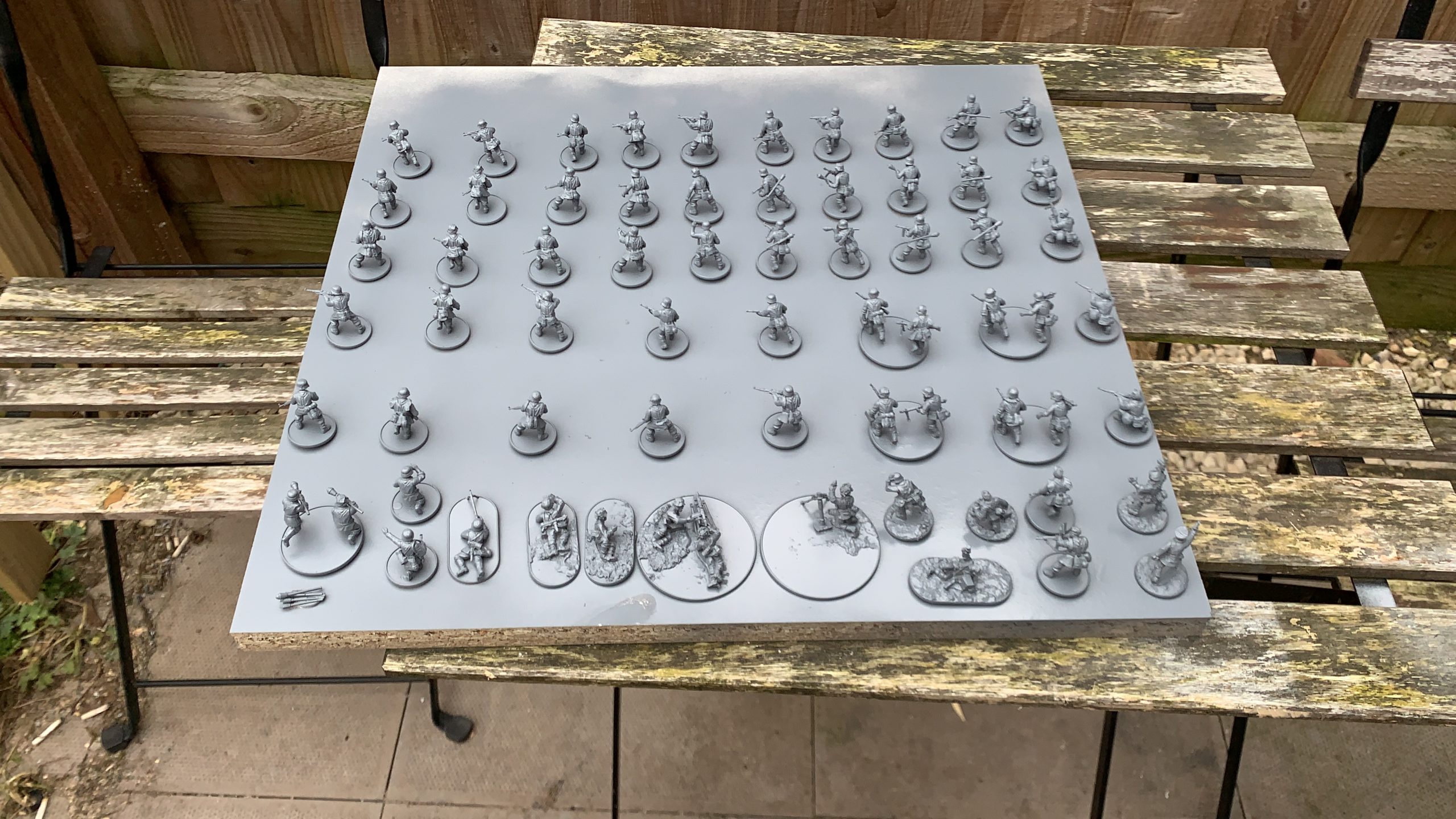 I then separated my models into two categories. Those with the poncho and those without. The paint scheme remains the same, but with added steps for the camouflage. 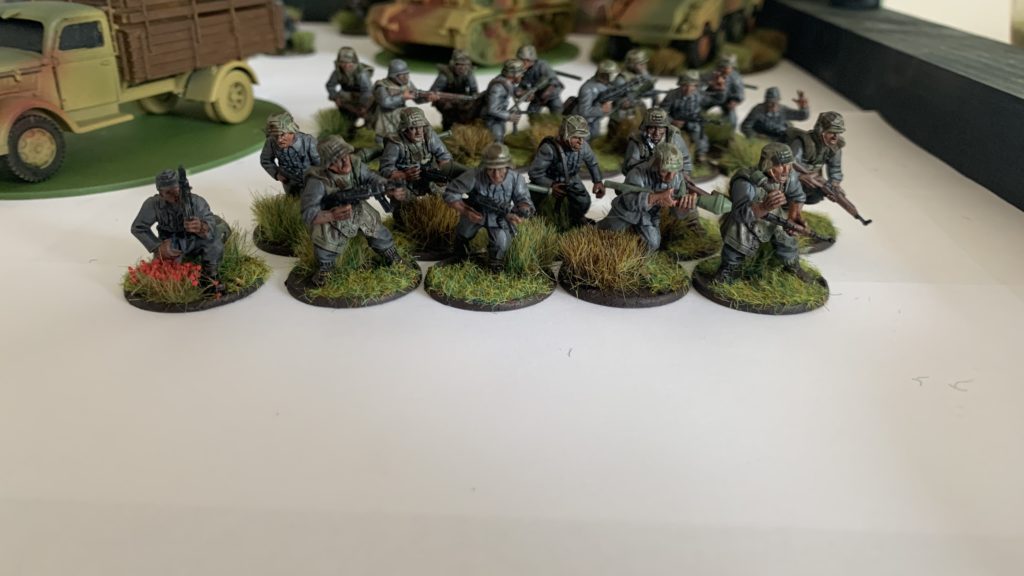 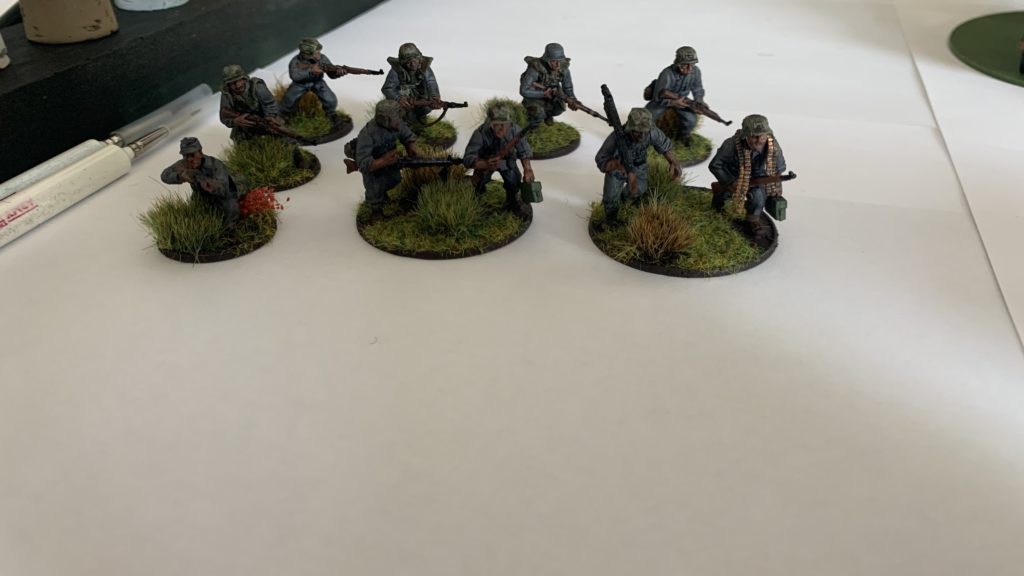 Another aspect of this project I was super looking forward to was using the airbrush my wife got me for Christmas. I had some airbrush paints that had been pre-thinned here already, and to be honest the three colour German camo scheme on the late was vehicles was a big driver of doing this project for me.

I began by basing each of the vehicles Dunklegelb, and from here I created the pattern with a red-brown and olive green. Seeing as it’s my first time with an airbrush, I am pretty pleased with the results. 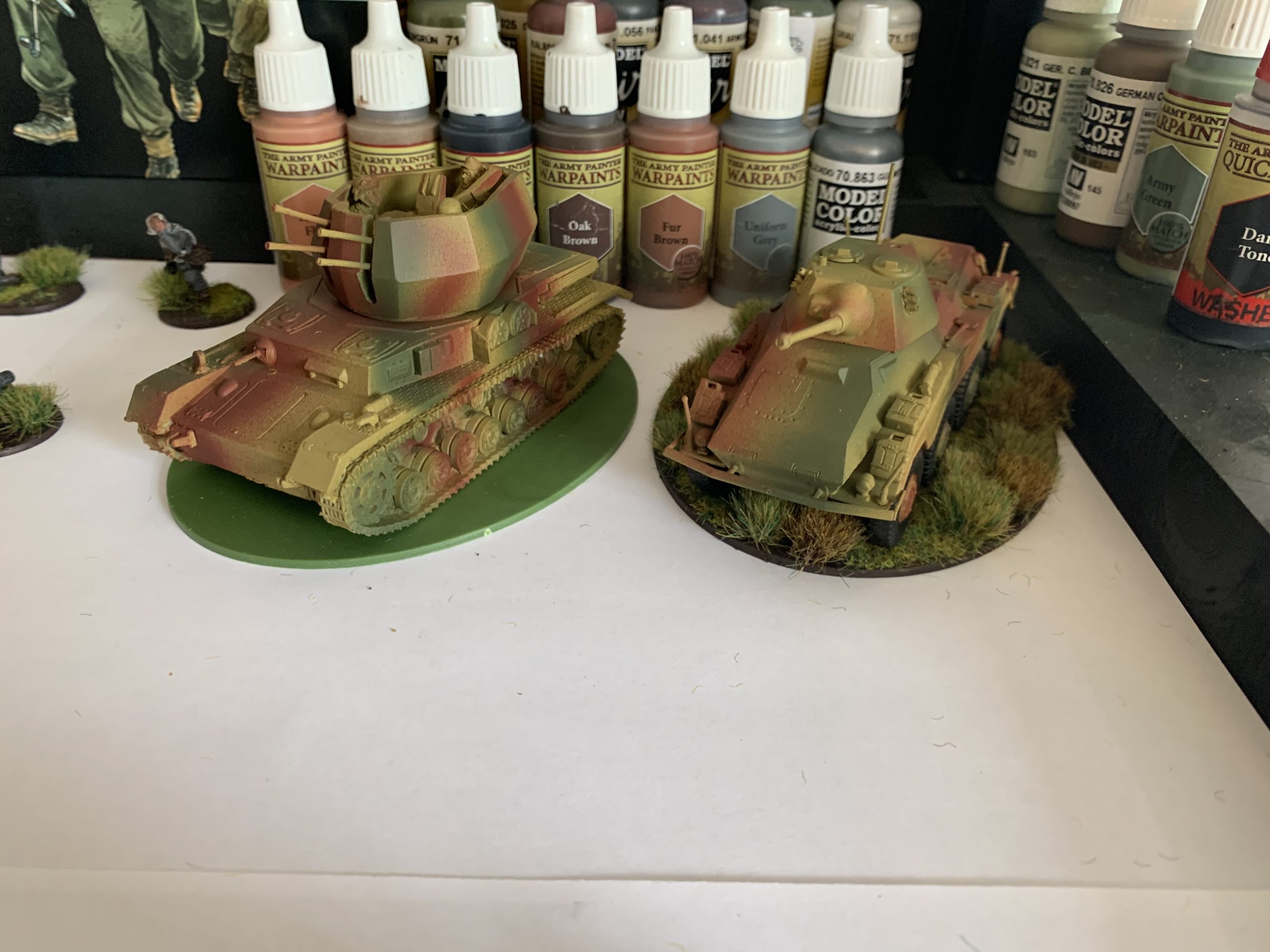 And that is it, my 2000 points of German grenadiers almost ready for the table. I am very excited to take them out for a test run in the near future and I will report on their operational effectiveness.

If you would like to watch me put the finishing touches on the vehicles on the Official Warlord Twitch Channel, I will be doing so this evening. You can follow us here to be notified when we go live.

Stay safe, look after each-other and I look forward to sharing my next project!