We’ve been sent this fabulous battle report by the Friends of General Haig, who helped us with the fantastic Auldearn table we showed off at our Open Day last month. This week, they’ve been refighting the Indian Mutiny with the first edition of Black Powder. Take it away gents!

As the sun beat mercilessly down on the men and woman trapped in the multiple buildings that
made up the British presence on the great plains of India, the adjutant shouted down to Col John S from his perch atop the top of the domed building

“Sorry, sir”, as if it was his fault, “there is no sign of the relief column yet”. 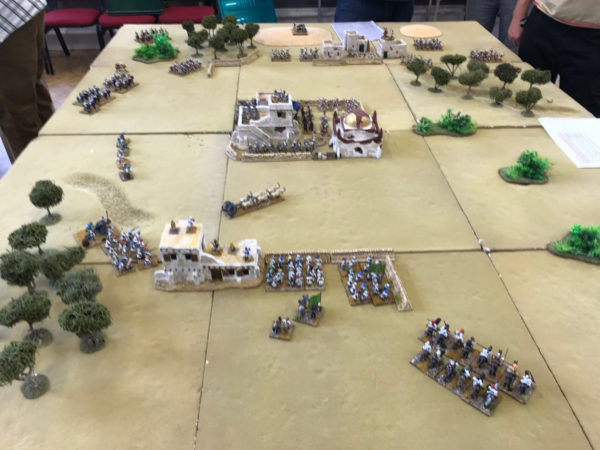 The relief column is expected to arrive from the bottom right of the picture.

A regiment of Gurkhas, the naval brigade and two regiments of loyal sepoys, were waiting patiently behind their man-made barricades, as the Col wished the regimental commanders well and ordered them to open fire on the slowly encroaching ring of mutineers. 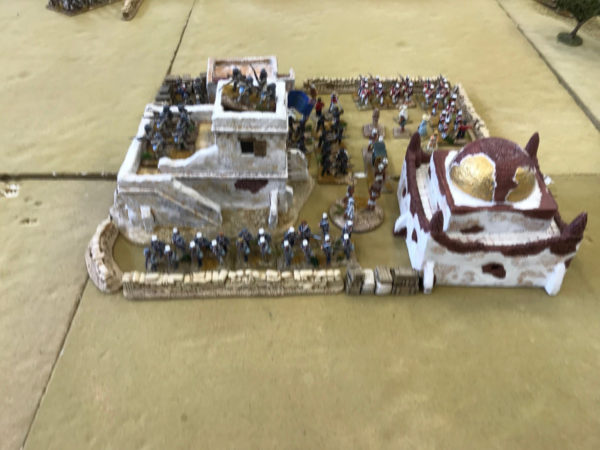 Their first salvo put a disorder on two massed units on the Southern edge of the tree line but no effect elsewhere, when out the further buildings and stone walls to the North, in the direction of the hopeful relief column, erupted three units of mutinous sepoys managing to get within a sword swipe of the Naval Brigade. To show their commitment even their local commander had joined in the fray.

Yet it was to no avail as the Naval Brigade managed to force back first one, then two of these fiendish units. The Gurkhas and the sepoys were causing their targets considerable damage as they managed to inflict serious casualties on them, but they too were slowly amassing casualties and disorder markers. Thankfully the rebel artillery was all sound and no effect. 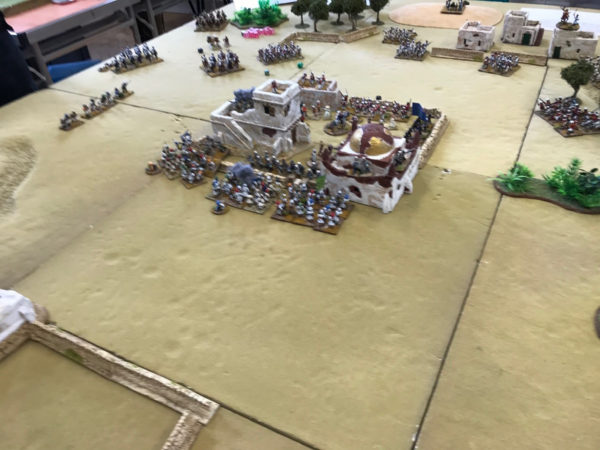 Then the Eastern rebels launched a combined cavalry and infantry on the Western barriers. Was this the result that the rebels were after?

The command rating of the rebels is a 7 so such an attack was a surprise to all.

Due to the barriers, their support and the casualties they had already inflicted on the attackers, the sepoys managed to repel both units.

The rebels on the Southern side had managed finally to get one unit near the British sepoys behind the barrier but their fire power, once more, despite their casualties and several moral tests, still halted them their tracks.

Then on the Northern side, though the last unit was successfully pushed back, the other two units tried once again to dislodge the Naval Brigade. The courtyard was now packed with casualty and disorder markers when a distant voice was heard.

“Sir, sir, I can see the relief column now”. 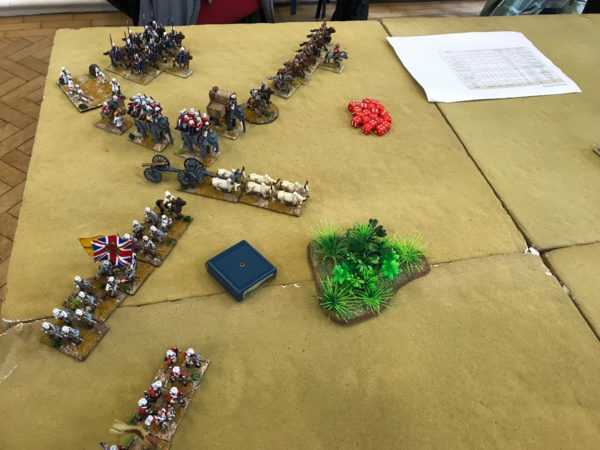 Actually, in effect it was – “ Ed’s managed to roll a five!”, so this elusive relief column was now in play. The hearts of the rebels sank as their units tried to roll scores that would allow them to make some reply, even a small one to the coming onslaught.

Hobson’s Horse, the British irregular cavalry was having a field day, right into the rear of the first rebel unit that was just about to charge again into the Naval Brigade. 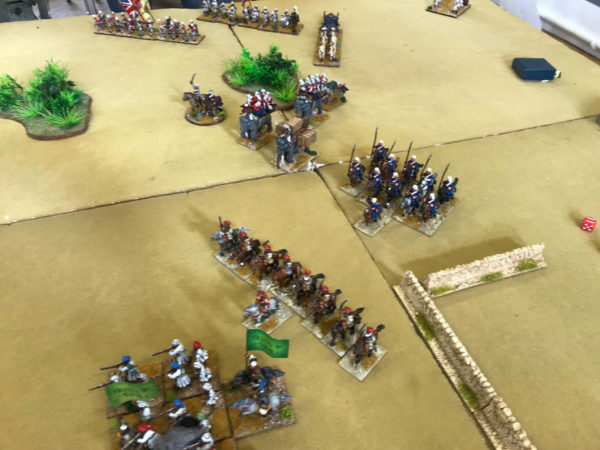 “They don’t like it up ‘em”, some wag shouted as the rebel sepoys left the field on-mass. Then It was the turn of the next rebel unit to receive this sweeping charge, but they along with the third rebellious unit managed to retreat to the tree line, but by now the enemies command was so shot up that the commander couldn’t get the units to take further commands except to fire, which to the surprise of Hobson’s Horse, brought them to a standstill, disordered with a number of casualties.

By this time the relief column has disgorged its red boiled bodied troops from their elephant troop carriers and were successfully inflicting mayhem on those rebels hiding in the trees to the West of the compound. Those surviving Gurkhas in the compound would have enjoyed jumping over their own barricades to return the compliment to the rebels but by now they too were a broken take commands.

“I think its time to go home for chi”, said on rebel commander to another as hopefulness fled to despair.

Tom spends most of his time buying books and painting miniatures. He enjoys putting animals on the bases of his miniatures and half-finishing side projects. Some say that he lives in a tower on top of some windswept northern hill with his wife and cow-patterned cat, Spaghetti.
View Profile | View all posts by Tom Mecredy
Black Powder 2: American War of Independence
Hats & Flags: The French-Indian War