Continuing our focus on Italian forces, we’re moving into the weird wars of Konflikt ’47 with a look at the Italian Falco Paratroopers!

Propelling the wearer into the air with great bursts of Rift energy, these jump jets allow soldiers to soar high over the battlefield. Able to rapidly bypass centres of resistance and sow chaos behind enemy lines, these new suits of armour give paratroopers a new edge over other Rift-enhanced forces.

Freshly equipped with the new Falcon armour, the Falco units wasted no time in putting their new equipment to use against the Allies. Striking from outposts along the frontlines, the Falco units struck at isolated outposts and supply convoys, using their enhanced mobility to outmanoeuvre any guards before vanishing back into the Italian countryside.

If you’re looking for additional mobility or striking power in your Italian army, you can’t go wrong by adding a squad or two of Falco Paratroopers. The Flight special rule allows them to ignore intervening terrain and move a lot further than their non-augmented counterparts.

Armed with SMGs, this unit is perfect for storming objectives or holding off determined counter-attacks.

We’ve created a scenario to showcase the speed and manoeuvrability of the Falco paratroopers. Imagine a squadron of Falcon-armed paratroopers striking across the wilderness of the Italian frontlines, aiming to knock out a lumbering Allied supply column. 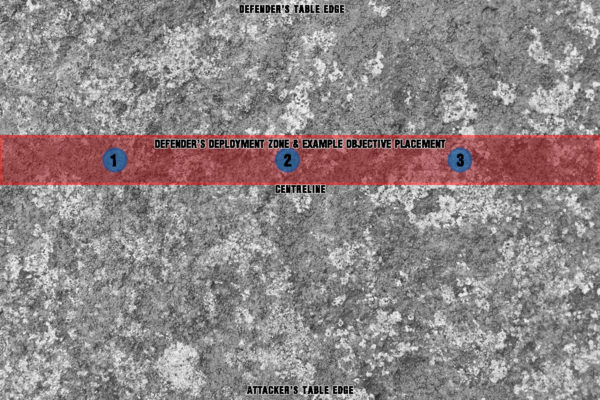 The mission is played across the width of a 6’ x 4’ table. After terrain is placed, players roll off to see who will be the attacker and defender. The winner chooses whether to attack or defend.

The other player then picks which table edge to deploy on. The defender’s deployment zone is any point in their own half of the board, measuring no more than 8” from the centre line running the length of the table.

The defender places three objective markers in his deployment zone. Objectives should be round markers measuring 50mm in diameter and be placed at least 16” away from each other. Objectives cannot be placed in buildings.

After the defender has deployed, the attacker chooses at least half of his force to form the first wave and any remaining units deploy in reserve (outflanking allowed). There is no forward deployment or preparatory bombardment allowed in this mission.

An attacking unit wishing to exit the board can do so at any time and is removed as soon as it makes contact with the edge of the board (note – every model in the unit must be able to reach the edge). Its order dice is removed from the bag. The defender seeks to preserve the objectives and to inflict maximum losses on the enemy.

The attacker receives 3 victory points for each objective destroyed. If he destroys at least two objectives, he will also receive 1 victory point for each of his units that exit the board via any table edge before the end of the game.

The defender receives 2 victory points for each enemy unit destroyed. Attacking units that remain in reserve at the end of the game count as destroyed (they have been separated from the raiding party and picked off).

To use the fantastic Falco paratroopers in your Konflikt ’47 games, you’ll need a copy of the excellent Defiance supplement, which covers the two new Italian factions and gives you some background on this new theatre of war.

The Falco paratroopers are available from our webstore! 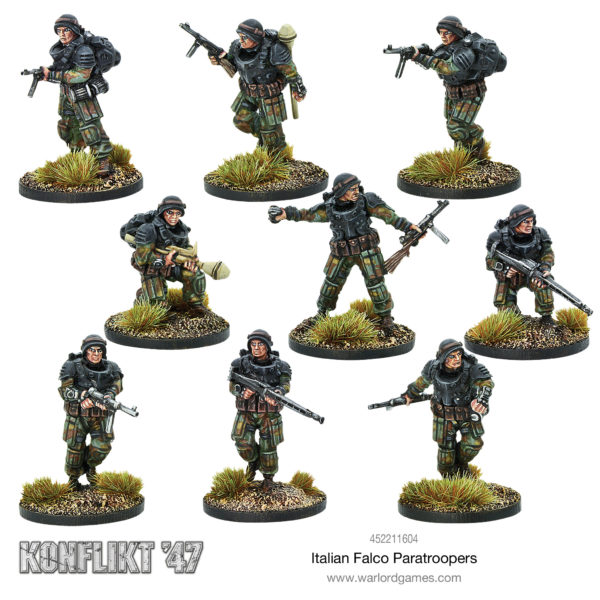 Tom spends most of his time buying books and painting miniatures. He enjoys putting animals on the bases of his miniatures and half-finishing side projects. Some say that he lives in a tower on top of some windswept northern hill with his wife and cow-patterned cat, Spaghetti.
View Profile | View all posts by Tom Mecredy
Black Powder 2: The 100 Days & Waterloo
Event: Cruel Seas Casts Off!