Spotlight: The Char B1 bis

To celebrate the upcoming release of the Battle of France book, we’re trundling into battle alongside the doughty French infantry this week with a spotlight on the formidable Char B1 bis.

“It has been said critically that there is a tendency in many armies to spend the peacetime studying how to fight the last war.” – Colonel J L Schley.

If any tank were to embody that concept, it would be the Char B. Designed by General Estienne as a breakthrough tank, it was created to fight a war that would never come.

The prevailing military thought in 1921 was that the next global war would take the same shape as the last one, with lines of static defences and emplacements. A modern breakthrough tank would smash a breach in the lines to be exploited by infantry and faster “cavalry” tanks. 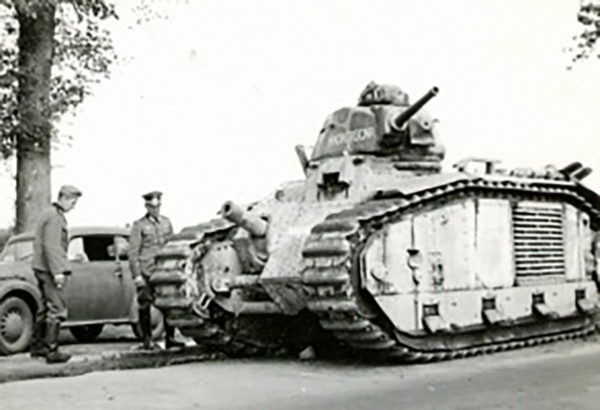 A German office inspects a disabled Char B1.

As such, the breakthrough tank would need heavy armour and a powerful gun. Originally conceived as a heavily armoured self-propelled gun, the form and function of the Char B was centred around operating this weapon as efficiently as possible. When, in the 1930s, it became apparent that it would have to contend with counter-attacking enemy armour, it was fitted with the turret from the Char D2, adding a potent 47mm anti-tank gun to its armament.

The Char B1 bis

Produced from 1937 onwards, the B1 bis was an upgraded variant with thicker armour and a longer-barrelled 47mm gun, further increasing its anti-tank capabilities. 369 of these upgraded tanks would be available for combat by June 1940.

In combat, the Char B1 bis was a formidable opponent. Its thick armour was almost impervious to contemporary anti-tank weapons and it could engage and destroy any German tank of the period. It was ultimately let down by poor logistics and being fundamentally unsuited to the kind of manoeuvre warfare practised during the Battle of France. 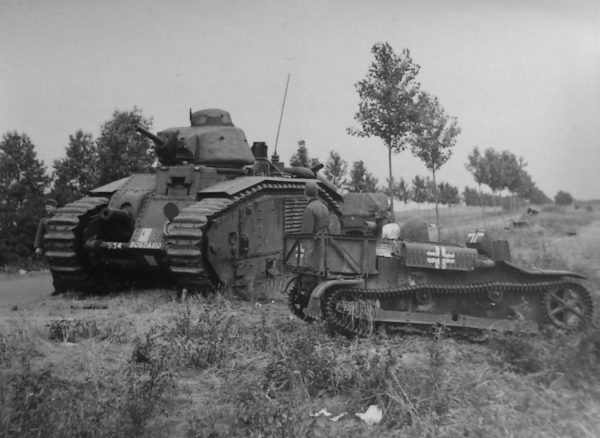 The Germans investigate another knocked out Char B1 from their captured UE Chenilette.

The highlight of the Char B1 bis’ career was at Stonne, in May 1940. Captain Pierre Billotte of the 41st Tank Battalion was leading a counter-attack against the advancing 7th Panzer Division. During the action, Billotte and his Char B1 bis “Eure” would destroy 2 Panzer IVs, 11 Panzer IIIs and 2 anti-tank guns. In the course of the battle, his tank was hit 140 times without getting knocked out.

The Char B1 bis in Bolt Action

In Bolt Action, where strategic manoeuvring and logistics have little impact on the game, the Char B1 bis is a formidable beast, possibly one of the best early war tanks for its points.

With 9+ armour all around, even light anti-tank guns are going to struggle to penetrate your armour, and the combination of the hull-mounted howitzer and turret-mounted anti-tank gun provide plenty of options for engaging infantry and armoured targets.

The disadvantages of a one-man turret (which forces an order test on every Advance, regardless of pins) and Slow (Movement of 6″ on an Advance and 12″ on a Run) can be mitigated by parking somewhere important and refusing to budge, no matter what gets thrown at you.

While the tank itself favours a particularly static playstyle, when supported by mechanized infantry or cavalry, it can be used to fix your opponent in place while the more mobile elements exploit their flanks or capture vital objectives.

We’ve produced an alternative quick-reference card for use during your games of Bolt Action. 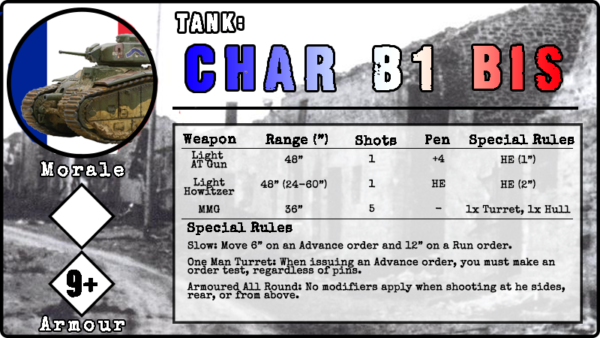 The Char B1 bis are available singly or as a platoon of 3 from our webstore! Each one comes with a choice of French and German vehicle options, including flamethrowers! 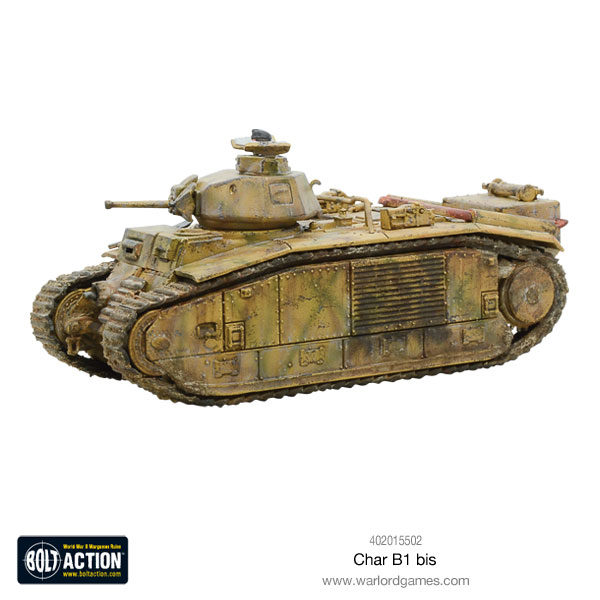 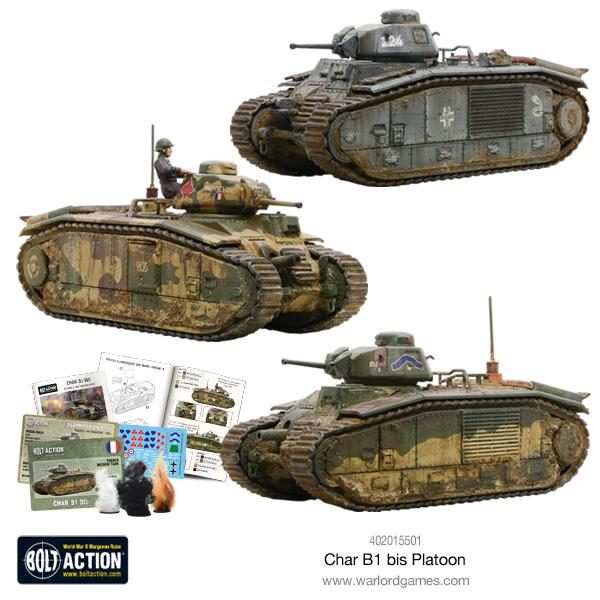 Our brand new Battle of France book is available to pre-order right now on the webstore! It comes with a free special edition miniature of Captain Pierre Bilotte, the perfect complement to your new Char B1 bis platoon!

Tom spends most of his time buying books and painting miniatures. He enjoys putting animals on the bases of his miniatures and half-finishing side projects. Some say that he lives in a tower on top of some windswept northern hill with his wife and cow-patterned cat, Spaghetti.
View Profile | View all posts by Tom Mecredy
Spotlight: Maison Forte MF10
Frontline Report: Bolt Action Campaign Rules