As the characters and the (mis)adventures portrayed in the Dad’s Army TV series are not all that serious, neither are these rules – we don’t recommend these for use in tournaments! 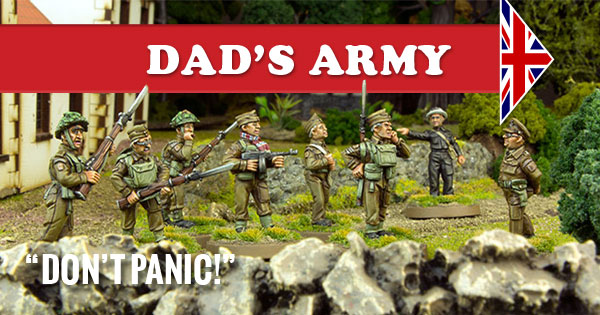 We suggest you incorporate these models into the Home Guard Section on page 23 of the Armies of Great Britain book.

Captain Mainwaring replaces the Captain choice, whilst the Wilson and Jones are direct replacements in the Home Guard section for an NCO and a rifle-armed soldier respectively.

The other characters of the Walmington-on-Sea platoon replace rifle-armed soldiers in the Home Guard Section. As this is a bit of fun there is no additional points costs for their special abilities.

The civilian (Local Defence Volunteers) versions of the characters are classed as ‘unarmed soldiers’ in the Home Guard Section and have the same points despite the extra abilities these models have. 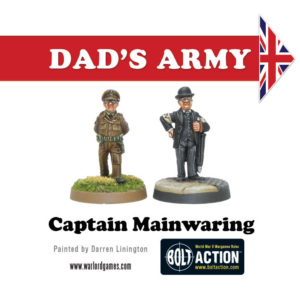 Captain Mainwaring is the prim and respectable local Bank Manager. He is proud of his standing in the community, even if he is less keen for folks to know about his humble background. His constant strutting and pomposity belies a leader whose loyalty to his men and country are equally boundless.

Now, pay attention men! In Bolt Action we represent Captain Mainwaring with the usual +3 morale bonus for his rank, but this is increased to +4 if Sergeant Wilson is part of the command section. Captain Mainwaring is fiercely loyal to his men – if any of the named individuals represented here should be removed as a casualty within 12″, then Captain Mainwaring immediately removes all pin markers from his own command section and automatically gets the next action if he has not gone already that turn (take a dice out of the bag and place it next to him to remind you). If he has already taken an action that turn he can go again: rotate the action dice to whatever order you wish and treat it as if it were a fresh order. He can do this any number of times during the turn if his men are falling casualty. 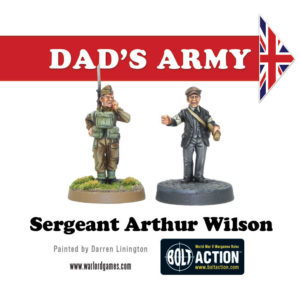 Socially superior, public-school educated and urbane, Wilson is none the less a diffident character who finds himself working under Mr Mainwaring the bank manager by day, and serving as his platoon Sergeant as part of the Home Guard. 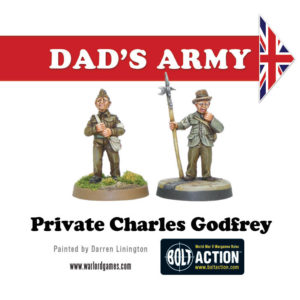 Godfrey is a veteran of the Great War whose frailty, age and weak bladder prevent him serving with quite his old vigour.

Might I be excused Sir? Godfrey is a Medic and every time you wish to use his medic special rule first roll a dice. On a score of 1 infirmity has struck and Godfrey doesn’t quite manage to get to his man in time, but on a roll of 2 or more the courage shown in the trenches of the Western Front shines out and he can reroll a failed medic ability once per turn. 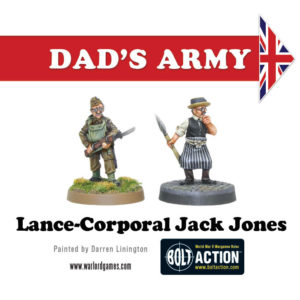 Jones is a veteran of Lord Kitchener’s campaign in the Sudan and no stranger to the rigours of hand-to-hand combat! As he is prone to pointing out, ‘they don’t like it up ’em’!

They don’t like it up ’em! If Jones is leader of the section no test is ever required to charge into an assault – not even against a tank! Whilst probably unwise, his crazy bayonet waving is positively unnerving. During any assault, the enemy spends so much time avoiding Jones’s flailing weapon that their number of attacks is halved! 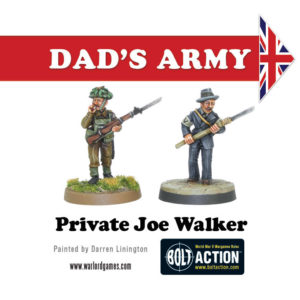 Walker is exempt from conscription in the regular army due to a severe corned beef allergy. This frees him up to concentrate on his wholesale business – and with goods of all kinds in short supply Walker’s ‘connections’ can come in surprisingly useful.

Five bob a’piece… Once per game Walker’s ability to conjure just what you need enables the entire section to get hold of enough extra ammunition to shoot twice if given a Fire order. 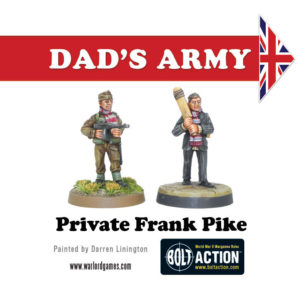 The youngest member of the platoon by a long way, Frank Pike is an enthusiast of American gangster movies and proud custodian of the section’s Thomson submachine gun. His mother insists he wrap up against the cold and frequently turns up on parade to make sure he is looking after himself.

I’ll tell my mum! Pike’s prowess with the Thompson is inspired rather than expert – but what he might lack in accuracy he more than makes up for in enthusiasm. Instead of taking two shots with the gun Pike can take as many shots as he likes up to 6. However, if he takes more than two shots then the gun jams if two or more of the dice rolled result in a 1. In this case work out the shooting as normal that turn and the gun cannot shoot at all thereafter. Stupid Boy! 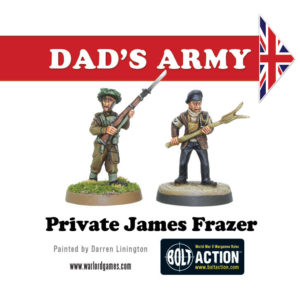 Frazer is the local undertaker and veteran of the Battle of Jutland. He is openly critical of Captain Mainwaring’s leadership, though his constant carping is usually followed by the claim that, ‘I never doubted you for a minute, Sir!’ as Mainwaring triumphs yet again!

We’re Doomed! Don’t mistake Frazer’s morbid cynicism for cowardice – if anyone can look the Grim Reaper in the face and stare him down it is Frazer. He is an undertaker after all! If Frazer is part of the section then once per turn you can re-roll any failed morale test. 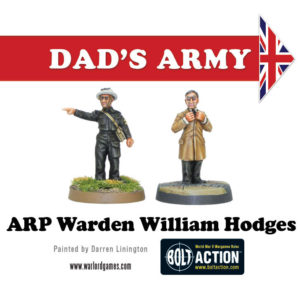 Hodges the Air Raid Warden and local grocer is Mainwaring’s great rival. The pair are always bickering over the use of the Church Hall, which they share together with the Verger’s Sea Scouts. He always begins any confrontation with Captain Mainwaring with a cry of, ‘now look ‘ere Napoleon!’ None the less, when it comes down to it, both know which side they are on.

Put that light out! In Bolt Action we’ll allow ARP (Air Raid Precautions) Hodges to work as an additional unarmed commander who can be included in your force for free so long as it also includes Captain Mainwaring. Hodges is treated as a command section of one model with a +1 morale bonus in the same way as a First Lieutenant. In addition, his meticulous precautions against air raids are such that if Hodges is included in your force at the start of the game, then any enemy Forward Air Observer suffers a -1 penalty when rolling for air support. 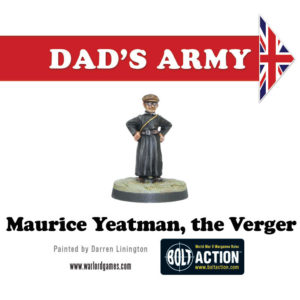 The Vicar and the Verger

The Reverend Farthing and the Verger are constantly exasperated by the many impositions of the war upon their Church Hall, as evidenced by the Verger’s constant cries of, ‘His Reverence isn’t going to like this!’ Inveterate busybodies who always know the latest gossip about all of the townsfolk, when it comes to the crunch they direct their charges – the Sea Scouts and women’s volunteers – to guide British reinforcements to the heart of the action!

The Vicar’s not going to like this! In Bolt Action we’ll put the pair together to make a special additional unarmed team – they can be included in your force for free so long as it also includes Captain Mainwaring. When reinforcements are making an order test to enter the table, a unit can re-roll a failed test if it is trying to move on to a table edge at a point within 12″ of the team. Each unit can only re-roll once per turn, but the re-roll works for every unit so long as it enters within 12″ of the Vicar and/or Verger. 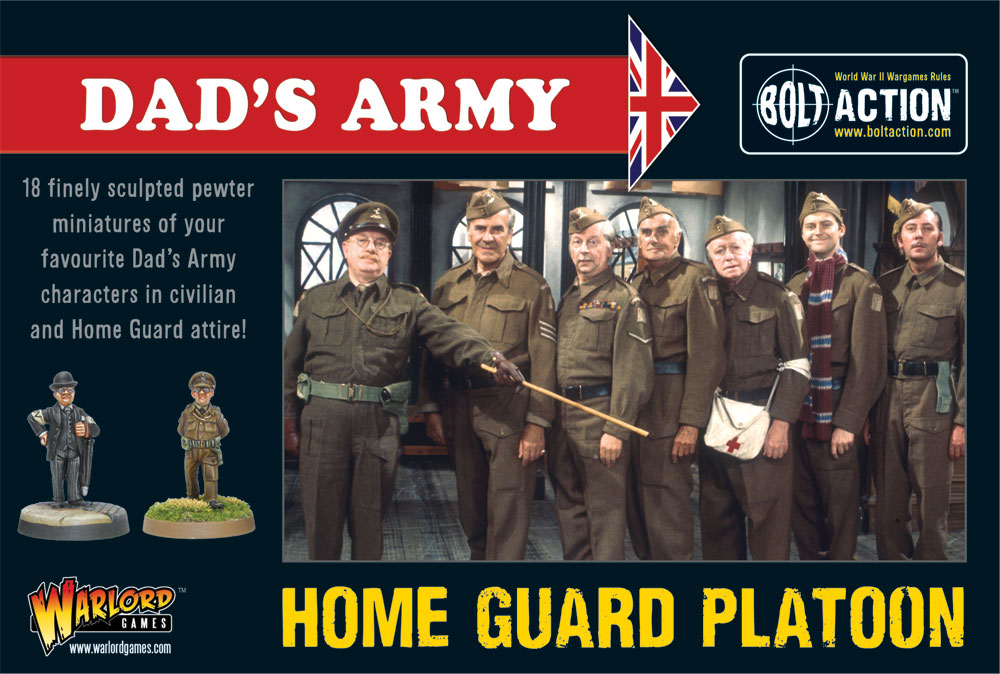 View Profile | View all posts by Graham Davey
Rules: Famous Characters of the Pacific Theatre
Beyond the Gates of Antares: the Game Setting