Beyond the Gates of Antares: the Game Setting

Rick: So far we’ve seen work in progress on the models for the Antares game, and I’ve talked a bit about the game system, but I’ve not made any mention of the background to the game – the fictional setting of the Antarean universe. One question I keep being asked is ‘what exactly are the Gates of Antares’ so, this week I thought I’d write a little bit about this core idea behind the game setting. 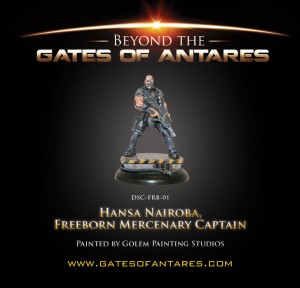 The Needs of a Wargame

It’s fair to say that I’m a game designer and a game player and not a science-fiction author, so when it comes to coming up with a setting for a game, as far as I’m concerned it has to fulfil certain specific objectives. For one thing, the background needs to give us a number of readily identifiable forces that we can pitch against each other. Each force has to offer us something distinct in terms of appearance, character, motivation and game play. The setting has to be sufficiently large in scope to enable us to fit in new forces in the future. We’d also like enough elbow room for players to adapt or invent their own forces and their own worlds if they want to do that. Furthermore, it has to offer us the opportunity for conflict to occur on the level we wish to play our games. I would add that it should ideally provide us with a backdrop against which we can set a whole variety of games from spaceship combat to role-play and huge battle games – even though those things might have to wait until we have sufficient time to explore them.

Of course, as a literary genre science fiction has been around a long time, and there can’t be many of us who don’t have our favourite TV show or movie. There is plenty out there to inspire our vision of the future, and many familiar ideas that we can adapt or remake to help us build our universe. For example, the core idea behind the Antarean setting is that travel between the stars is only possible by means of wormholes in space. Spacecraft travel through these wormholes via artificial gateways – the Gates of Antares. Obviously, this is not an original idea in itself. The concept of wormhole travel is a science-fiction trope seen in a number of TV series and featured in many books. It is a very useful idea, however, because it allows us to define our universe in terms of fixed routes that connect places together. In other words, it gives us a kind of comprehensible geography upon which we can arrange a cast of millions of worlds. 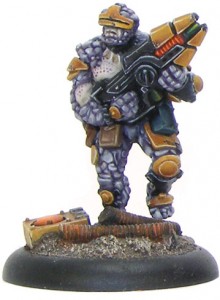 Gates to the Universe

This then is the basic idea behind the Antarean universe. Travel by spacecraft is limited by the speed of light, making journeys between all but the closest stars a practical impossibility. However, thanks to the discovery of a network of spacial wormholes, mankind has spread throughout the galaxy and beyond. These wormholes are artificial constructs – unfathomable machines left over from a pre-human civilisation that existed millions of years ago. I refer to these ancients as the Builders – an imagined race far in advance of even the sophisticated panhuman societies of Antarean space. Whether these Builders are extinct or destroyed, or whether they still exist in some form, and whether remnants of their civilisation can be found aside from the spatial gateways, are all entertaining questions that can be addressed in the future.

In our setting we are invited to imagine that humans exploring the outer reaches of our solar system discovered the first wormhole gate. This gate led to the hub where all gates emerge – the star Antares. Because all gates lead back to Antares I refer to all of the worlds connected in this way as Antarean space. Distances between worlds in Antarean space don’t necessarily bear any relationship to distances in real space, so worlds that are galaxies apart might be only a few days away in Antarean space terms, whilst others that are relatively close might be months apart via wormhole travel. All travel between worlds connected in Antarean space has to go via Antares, so a ship would enter a gate somewhere in the outer solar system of planet A, emerge at Antares from the connecting gate to A, and then travel to a connecting gate to planet B, entering that gate and travelling to the gateway on the outer solar system of planet B.

Antares itself is imagined to be an artificial construct that has the appearance of what we call a Red Supergiant star. Within its photosphere lie the gates themselves, rising from the fiery depths in the form of huge hollow spikes. The open tips of these spikes are the eponymous Gates of Antares. There are many millions of gates, some rise high above the photosphere and others lie deeper down within it. Most rise and fall according to some cyclic property of interdimensional space – rising as the wormholes becomes accessible and falling as they become disconnected or dangerous. Disconnection happens all the time, and has happened on a catastrophic intergalactic scale during times past (most recently at the end of Sixth Age – the age preceding the current Seventh Age of Humankind). Antares was built to deal with these disruptions and fluctuations, and as routes are severed they are remade, which may take a few years, many centuries and – in some cases – longer still. The divide between the rival societies of the Isorians and Concord are the result of one such period of isolation – when the world of the Isori Senatex was cut off from the rest of human space creating an irreconcilable shard. 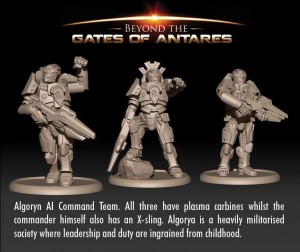 Now, we might imagine that having a setting where all of our millions of worlds and myriad civilisations have the ability to turn up in one spot might pose a few problems. For example – a civilisation powerful enough to control the Antares system would surely control the whole of Antarean space, and there would be little opportunity for rivalry or conflict. In a wargame, rivalries and conflict are kind of the point after all! To put things into context, we have consider the size of Antares – a supergiant star with a radius estimated to be nearly 900 times that of our sun. That means the outer surface of Antares is equivalent to a sphere with a radius greater than the orbit of Mars in our own solar system (Mars orbits at 227 million kilometres from our sun whilst Antares has an estimated radius of 300 million kilometres). If we imagine spacecraft manoeuvring into and out of gates at modest speeds, then it is conceivable that travelling from one point on the surface of Antares to another might take days, weeks, months or even years of journey time. So immense are the distances involved, that the proximity of gateways to each other creates a kind of local geography. Worlds whose gateways lie close together can interact fairly easily. Worlds whose gateways lie on opposite sides of Antares are unlikely to have direct interaction at all. In this way it is possible to imagine a map based on the surface of Antares, with areas divided between the various factions and species of Antarean space, and with borders and neighbours, as well as regions of contested influence.

The size of Antares and the number of gates means that some gates remain unexplored altogether. Others connect to worlds colonised in ages past, but which have been isolated for hundreds or thousands of years. Sometimes new gates emerge from the photosphere, and where they lead to can only be discovered by exploration. Exploration of this kind is one of the key motivations of the different forces of Antarean space. The search for new worlds and potentially for new races and technologies is perceived as one of the main aims of integrated machine-intelligence (IMTel) driven societies. Other societies – such as that of the Varda of the Freeborn and of the Boromite Guilds – are more interested in establishing secretive bases of operations, places where they can hide quietly away, and where they can preserve their identities away from all-consuming IMTel and the uncompromising Mardarins of the NuHu that form its living matrix. The ultimate prize is to discover the secret of Antares itself, the technology of the Builders who created the wormhole network, a prize that would enable its possessor to control the whole of Antarean space.

Although the size of Antares makes it almost impossible for any faction to control the wormhole nexus, there is an even greater barrier that faces anyone who might try. This is Antares itself. Antares is no passive device but a machine of great complexity, a machine that is endlessly capable of remaking itself and – ultimately – of protecting itself too. Antares’ own defence mechanisms make it impossible for permanent stations to exist within all but the most remote of orbits. Even the study of Antares and Antarean technology presents a challenge – as any close examination of the nexus can be interpreted as aggression. Conflicts do occur between ships travelling over the Antarean surface, but such actions are dangerous and likely to trigger the nexus’ own defences. The energy needed to pluck a ship from space and pull it down into the photosphere, never to be seen again, is as nothing compared to the power of Antares itself. Thus Antares is not only the hub that connects the wormhole network together, it is also its protector and guardian, and by extension the guarantor of safe passage to all who ply its gates.

View Profile | View all posts by Graham Davey
Rules: Dad’s Army in Bolt Action
History: The BEF and the Fall of France