It’s time to unleash the full force of your armies as Alessio Cavatore brings us some exciting new optional rules for massive games of Bolt Action: 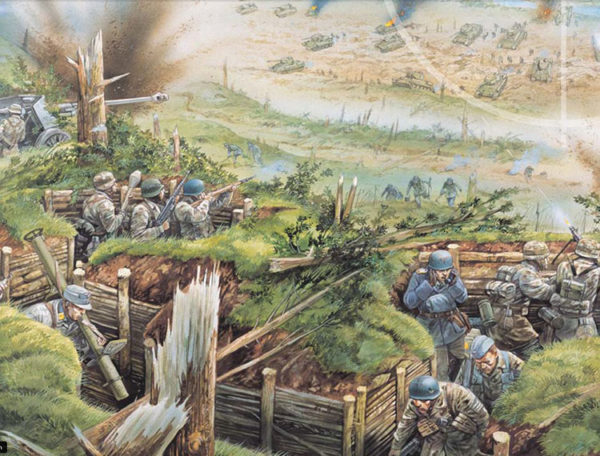 The rules of Bolt Action have been designed for platoon-level engagements involving a few reinforced platoons, and played on a 6’ x 4’ table. They play best with twenty to fifty infantry, one or two artillery pieces and one to four vehicles (counting transports and AFVs).

However, wargamers being wargamers, we have all sooner or later faced the challenge of how to handle a massive game with many more units than that, and/or played on a gigantic surface.

The optional rules presented in this article should help with running such larger games.

more units than you have order dice?

Perhaps the most common ‘size’ problem is having more units in your force than you have Order dice for. Well, obviously you need to buy more dice! Alternatively, you can of course use normal dice, as suggested on page 10 of the rulebook.

However, if neither solution is immediately available, you should not let that deter you from playing a game. You can set an Order Dice Limit (ODL) – a maximum number of dice for both players, say for example 12 dice, which conveniently is the amount of dice in a pack of Order dice.

Your force can then comprise of any number of units, but you know that the ODL you have is 12, or whatever other limit you decided for. At the end of the turn, you and/or your opponent will then have some units that have not been activated that turn – those units will do nothing that turn and simply remain where they are.

This ODL rule can generate a few rules issues, which should be covered by the exceptions listed below. It is important to know that these exceptions to the normal rules only apply as long as you have more units left in your force than the ODL. When the number of units left in your force is equal to or lower than the ODL, the rules revert to normal.

These forces are by far the easiest ones to handle, as all they are really is just a large normal force. So, if for example player A has a 1000 pts force (made of one or more platoons), and player B has a 750 points force (also made of one or more platoons), and both forces are from a single force list, say the Armies of the US for example, then this is just the same as a 1750 pts US force.

When it comes to the game, you can either simply put a US die for each unit into the cup, and then the players control their own troops on the field and can cheerfully agree who gets the next US die drawn from the cup, or agree that they get one each in turn…

Alternatively, the two players can have dice of different colours – ideally dice that still go well with their troops, like green dice for US Army soldiers and Olive Drab dice for Airborne US troops, but that’s not strictly necessary, of course. This will save any debate about whose units are going to get the die that is drawn from the cup. Trust us, this normally speeds up gameplay considerably!

First of all, we encourage mixing nationalities only with both sides’ agreement, as mixed forces may trigger rules conflicts, which will need to be resolved on the fly by the players. As a guideline, special rules that affect the whole force or individual units of a particular nationality do not affect their allies. For example, the Morale bonus of a British officer would not affect US units in range, and the Modern Communications army special rule of the Americans does not affect British units that are in Reserve alongside their US counterparts.

When assembling a mixed force, select at least one platoon from one army list (e.g. Armies of the US) and then at least one platoon from another army list (e.g. Armies of Great Britain). The points cost total of all of these platoons added together must be equal to the agreed point total, in other words equal to the opponent’s. For example, if you are about to face 1000 pts of Germans, you may want to select one or more US platoons to a value of 500 pts and one or more British platoons to a value of 500 pts. Of course the split does not have to be 50-50, and we leave that to he players (e.g. a 1500 pts Italian force may join a 500 pts German contingent against a 2000 pts British force in a game set in North Africa…).

You may of course try some “what if” scenarios and have your Germans fight alongside the Western allies against the Soviets, or even ignore all historical accuracy and simply have fun – how about a game with a mixed German and French force fighting against a Soviet-Japanese army!

As described above, during the game you may use the same colour dice for the entire mixed force, in which case you’ll have to decide which unit gets the dice – by debating it with your allied player. Alternatively, you may assign different coloured dice to each nationality.

At the end of a game, each nationality scores Victory points individually (which gives you bragging rights), but the forces fighting as allies will of course add their points together to calculate which side has won the game, as normal. 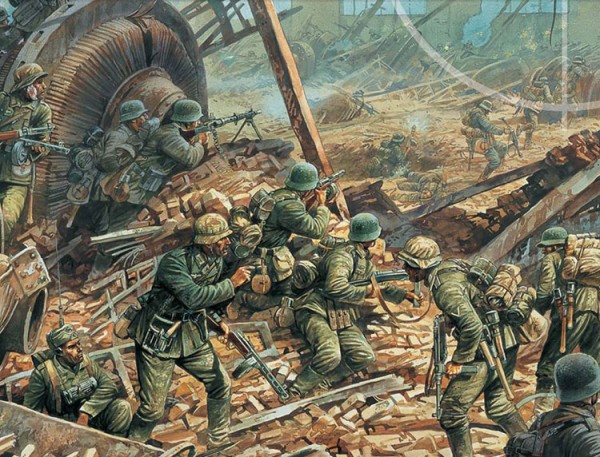 In reality, an infantry squad could make use of several small transport vehicles, which would stick together as a column. A good example of this could be a ten-man British section divided over two Bren carriers.

In game terms, you can field two or more transport vehicles together as a ‘transport unit’, as long as they come from the same entry in a book. This unit of vehicles operates just as a normal unit, with the exceptions noted below:

If you are playing on a floor or a very large gaming table, you will find that the distances feel wrong and/or that scenarios are written so that they last too few turns, which in some cases might even make the scenario impossible to achieve within the given time!

One way around this problem is simply to double all measurements (movement, weapon ranges, set-up distances, etc.), while keeping the number of turns the same as presented in the scenario you are playing. So literally you are playing the same scenario, but making use of a larger space.

Alternatively, you can just double the set-up distances, so that for example opposite forces start the game 24” from the middle line rather than 12”, and then double the amount of turns in the scenario you are going to play. This solution will result in a game that will last longer, but will give you the impression of covering a lot of ground, with a lot of manoeuvring. Oh, and keep in mind that the first few turns would not see much shooting, as most weapons are going to be out of range!

Multiple Activations with a Single Dice

This is a complex solution, and one that turns Bolt Action into something considerably different. For this reason, we will just touch upon it, as a proper alternative system of this kind could take many, many pages, or indeed almost warrant a supplement in itself.

Basically the idea is that when you draw a dice, instead of activating a unit, you activate a group of units. The most intuitive way of doing this is that each Platoon is activated by a die. So at set up you only place one die per Platoon in the mug, but you still need to have at hand enough dice for all of the units in your army (alternatively you could use ‘activated’ markers, like glass beads, to show that a unit has been ordered that turn).

This is easier said than done, as your platoons tend to get intermingled during a battle, so that it might get difficult to remember which units belong to Platoon A and which belong to Platoon B… So it certainly helps if you keep your platoons very small and/or easily recognisable. You could for example have a platoon made up of airborne troops and one made up of normal army soldiers with all of the vehicles. That should make it very obvious which models are activated together. Alternatively, you can paint identification marks either directly on the units themselves or just on the edge or under their bases…

As you can appreciate, this speeds up the game, moving it one step closer to games where each side moves all of its models first and then the other moves all of its. The gaming experience is going to be quite different from normal Bolt Action, but it might help resolving really, really huge games within a reasonable time. Whatever you do, proceed with caution! 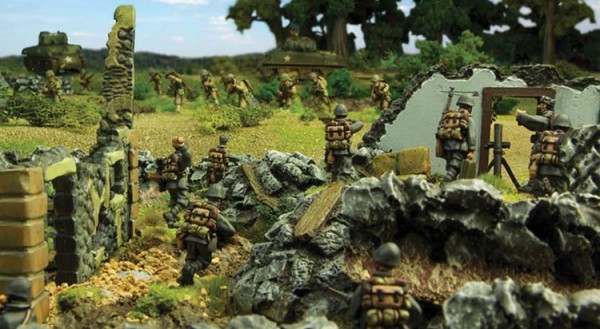 Muster your forces for a mass battle – check out our money saving Bolt Action Army Deals.