Warlord’s own Mr Sawyer has been deliriously chopping, cutting and gluing our new plastic WWII German infantry. He’s enjoyed himself far more than a grown man should do if you ask us. Here he shows off  the end results of his converting as he shows how to get great results from the plastics with a little application and imagination. Over to you, Paul… 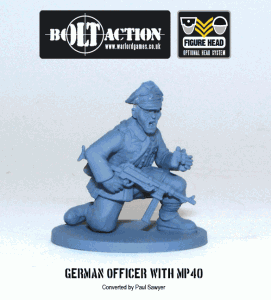 There’s no better place to start than the archetypal German officer in peaked cap. This is not so much a conversion but a head swap and interesting posing. The head is just one of the many officer variants in our metal Waffen-SS range. The SS are just one of the Bolt Action ranges to use the Figure Head system of separate heads. This gives you loads of options for building your miniatures in interesting poses and all but guarantees your soldiers all look different.  As well as the metal head I gave him another German trademark – the MP40 machine pistol. Popping a pair of binoculars in his left hand gives the overall  feel of an officer directing his men in the field. 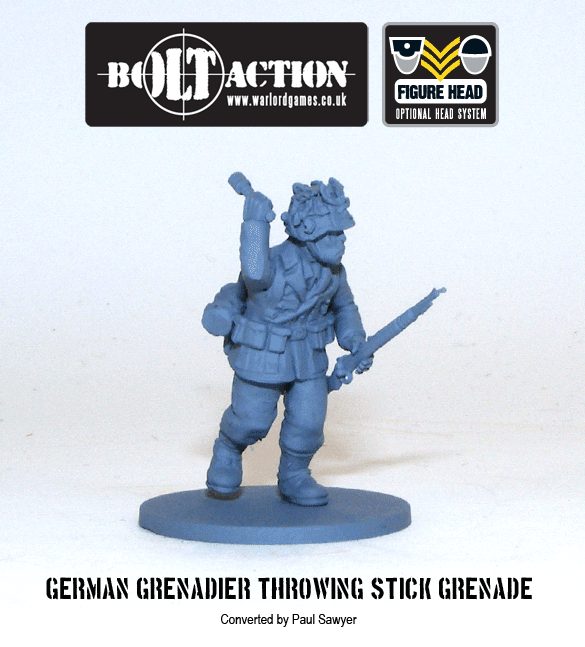 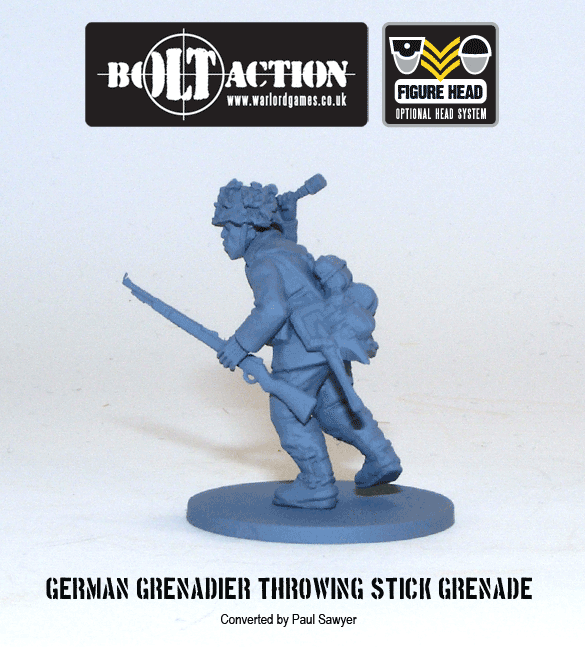 The German soldier above has been converted to be throwing a stick grenade. First up was to do a leg swap. Using body number  11 (see the in-box leaflet) as a basis for the model I opted to use the right leg from body 8. This gave the miniature something of a forward momentum which he’d need to be throwing the grenade. The joy of plastics means it was very simple to remove the leg and glue it in place. Withe addition of a little bit of Green Stuff modelling putty to fill the joint it took very little time or application.

Once again I opted to use a head from the Waffen-SS range – this one having plenty of foliage attached to his helmet. For his left arm I picked out arm 3 as I wanted him holding his Kar98K rifle and a more bent arm gave a natural posing to the figure. The hand wasn’t the right pose or angle so I simply snipped the hand off arm 4 and repositioned it as if holding the rifle.

For the grenade-throwing arm I used arm 6 and, cutting away the hand, glued on the grenade hand from the weapon sprue.

Whilst this may sound like a lot of work the ease with which you can cut and glue plastic components means it is both easy and fast. A dab of glue and it was all done – this would have been something of a pain with metal miniatures (not that it’s stopped me in the past!). 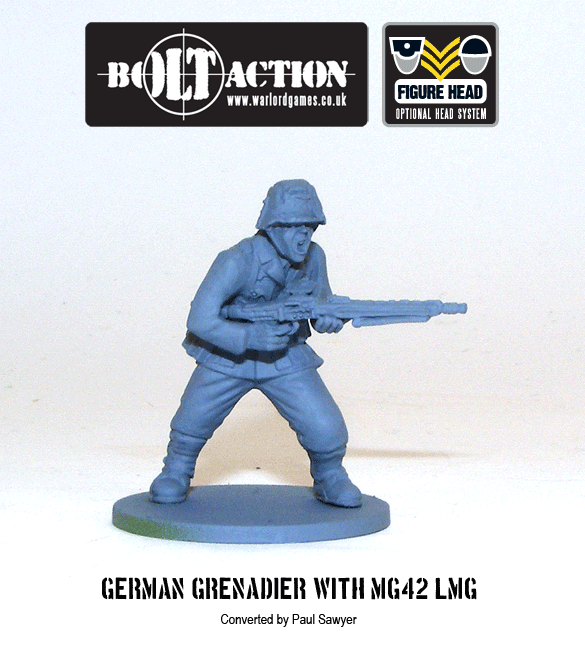 This light machine gunner toting his MG42 with drum magazine is a very simple head swap – again an SS head. This time a camo-covered helmet. The shouting face seemed an ideal to complement him blazing away from the hip.

Contrary to popular opinion you’d have to lean forward to counter the prodigious recoil one of these weapons would produce. Leaning back and spraying hot lead would see you pitching over backwards in no time. Have a shufti at this short video to see what I mean. 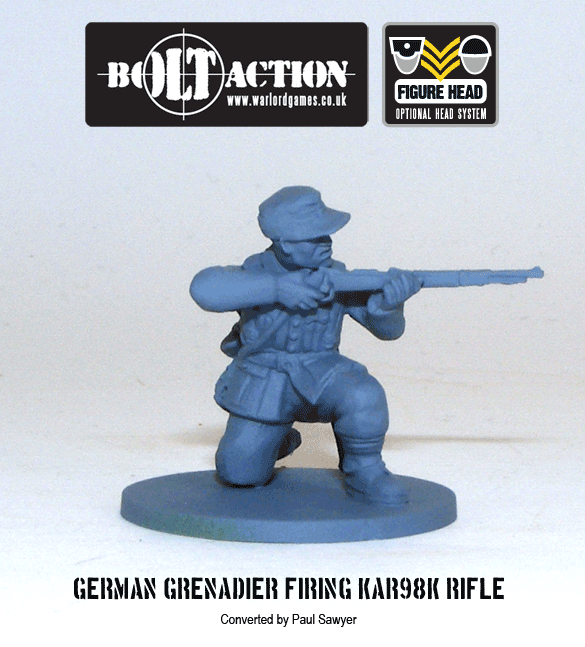 Okay, so this kneeling miniature isn’t a conversion at all but I love the natural pose. This can be built straight out of the box. Tilting the heading in towards the weapon gives a semblance of aiming and lends the pose an air of menace. This pic also shows off the detail on the KAR98K rifle nicely. 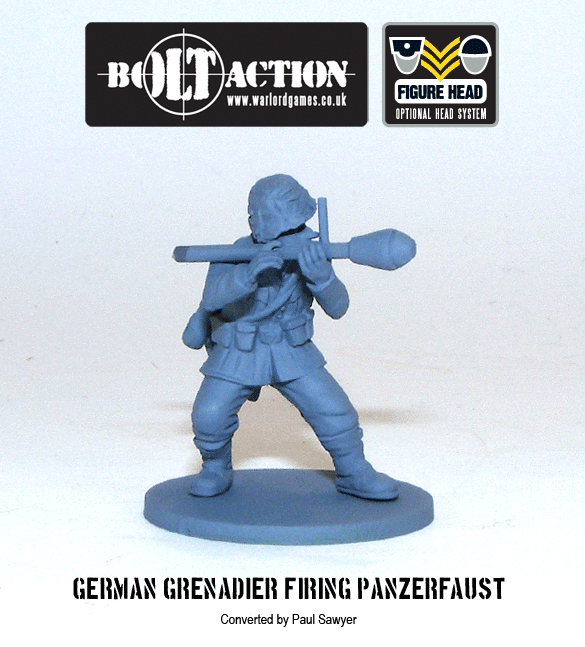 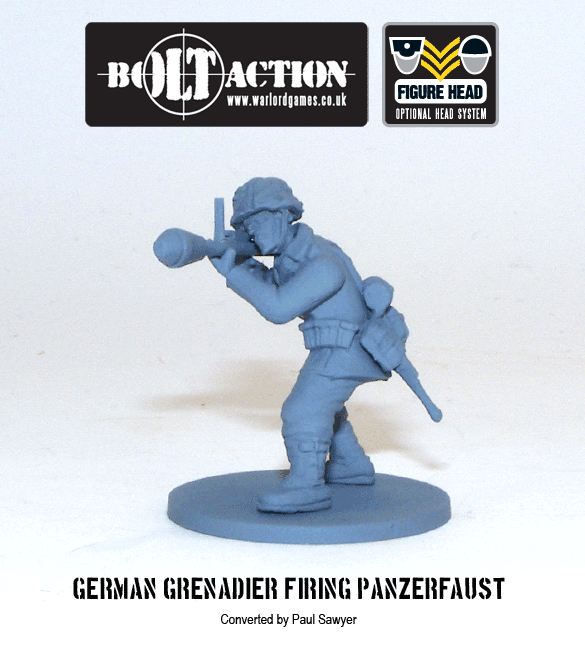 Ah, the good old German Panzerfaust! One of the trademark weapons of the German landsers, the hand-held anti-tank projectile became rightly feared by Allied tank crews – especially in the claustrophobic French bocage.

This conversion was one of the more fiddly so I made sure of getting all the parts right by doing a dry run with Blu-tack. I can’t recommend a dry run enough!

First port of call was the modify the Panzerfaust itself. Whilst it’s more than adequate to simply show the model firing the weapon as it is on the sprue I wanted to go that little step further and have the sights raised. This was very easy – I cut away the front of the firing mechanism and substituted it with a length taken from the MP40 with extended stock. Add a bit of plastic glue and all done!

For the left arm I chose arm 3 but swapped the hand with one from arm 4. To complete the left arm I coated the base of the thumb with plastic glue to soften it up and then bent it round as if gripping the shaft of the Panzerfaust. Once set in place it looks as if it were made to hold the weapon.

The right arm was made from arm 3.  Again I chose to swap and reposition the hand – this time using the hand from arm 6 as the raised trigger finger added an extra level of movement to the miniature. I plan to add a Kar98K rifle slung on a strap over his shoulder but will add that after it’s all been painted.

The head was, once again, from the Waffen-SS range and I tilted the head in towards the Panzerfaust so he was peering through the sight, Allied vehicle targeted… 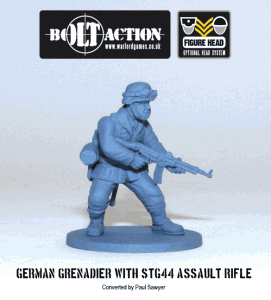 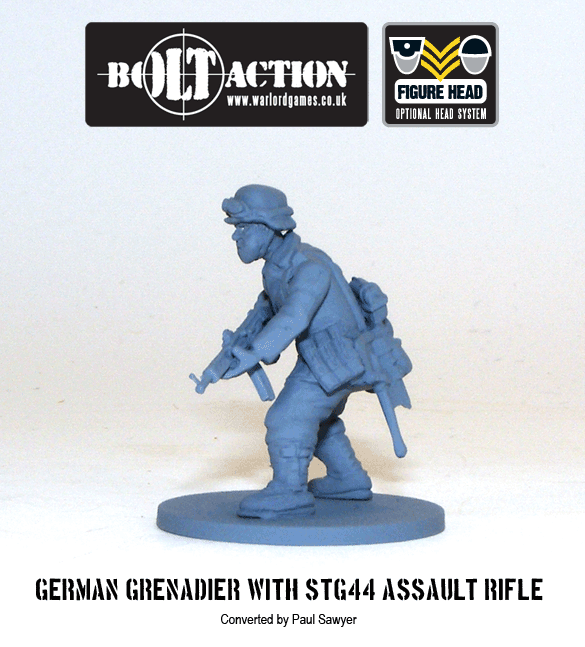 Next up is a soldat with STG44 assault rifle. The main components are straight off the sprue but once again I’ve added a head from the Waffen-SS range for variety.  This isn’t just because there is even more variety of headgear but also some of the faces have bags of character such as this one. I’ve always been a sucker for the stahlhelm with goggles on…

The other thing of note is the addition of an STG44 ammo pouch which I blagged from an old 1/48 scale kit. You’ll also notice I cut away the Kar98K ammo pouches – very easy to do with a new blade in your hobby knife. 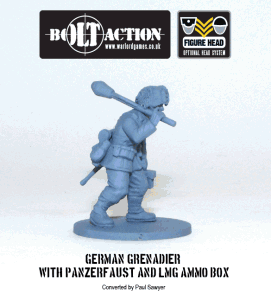 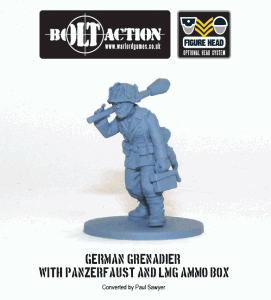 This conversion is one of my favourites. Partly because the grenadier is armed for trouble and partly because it’s such a natural pose. I was keen to convert a loader for the MG42 gunner so the pair could work in tandem. I didn’t want just another soldat carrying an ammo box so opted to give him a  Panzerfaust as well.

The first thing to do was to cut the left leg from body 8 and add it to this torso (11). That gave me a new pose and made the figure look weary and laden – quite right given what he’ll be carrying.

Arm 6 was used for holding the Panzerfaust. For the left arm I used the straight arm pointing (arm 5) I had to shave away part of the shoulder to get it to hang down as if taking load. A little bit of Green Stuff finished the shoulder joint off nicely. The bit that had me stumped was the hand as I wanted a closed fist to represent the hand grasping the strap on top of the ammo case. I toyed with bending the fingers around on one or two of the hands on the sprue but in the end admitted defeat and whipped one of a sprue of our plastic Imperial Romans.  When the plastic British are released there are ample alternative there!

As with the other Panzerfaust-wielding grenadier this model will also have a rifle slung over his shoulder after he’s been painted. 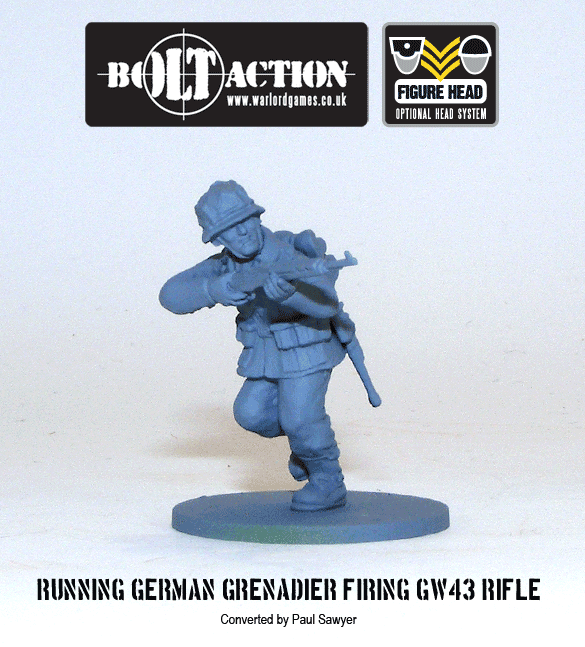 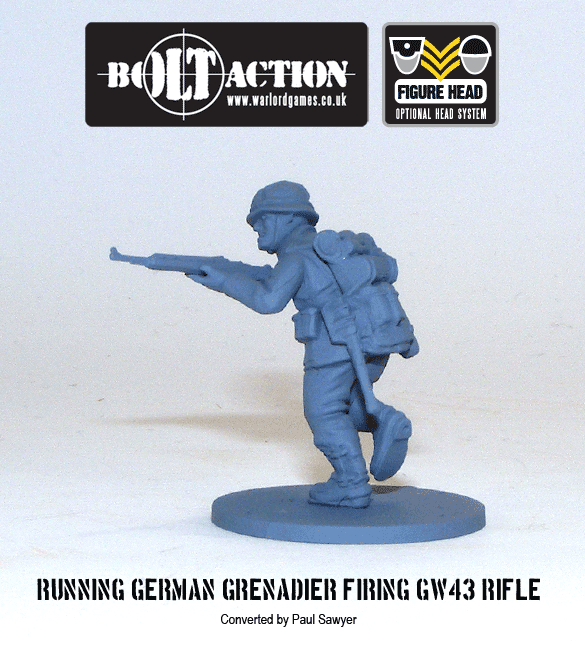 This one isn’t a conversion at all – I just like the movement that this build gives. A soldier firing his GW43 on the move, not wanting to present an easy target to the enemy. One of my pet hates are WWII models stood stock upright and firing as if at a firing range – look at any photo of the period and the subjects are keeping low or on the move! All the parts for this are straight from the boxed set. 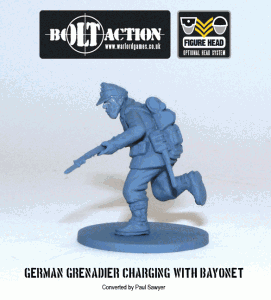 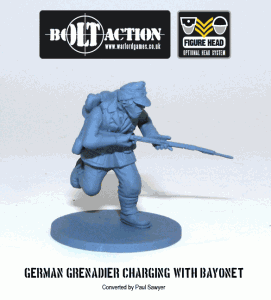 The last in this current batch is another of the conversions I’m most pleased with.  Using the torso minus left leg left over from the conversion above (with Panzerfaust and ammo box) as the basis for this model I added leg 12 plus a little Green Stuff to fill the joint. This gave me a pose that sees the soldat running hell for leather to get to cover or to close with the enemy and make use of his bayonet. I chose another head from the Waffen-SS range – this time one with field cap. This was partly because I wanted to add more variety to the squad but also because the way the cap sat on the head gave him a grim visage as you’d expect for someone crossing open space in a battlezone! I cut the neck stump down a bit as I wanted the model to be keeping low and again to sit slightly forward to enhance the feeling of forward movement.

With the models built and undercoated I’m now throwing myself into the painting – more pics when they’re done.

One of the most frustrating parts of the process was knowing that the arms on the upcoming plastic British infantry are going to work so well with the Germans, creating loads more conversion opportunities. So many times I had to catch myself mid-thought  because the British aren’t quite with us yet. One day soon though!

Visit our webstore to buy these fantastic plastic Germans and take a look at the rest of our WWII – Bolt Action – Germans range!