What could be a tougher proposition than the Waffen-SS? Waffen-SS Pioniers! Not only armed with a variety of equipment, these hardened troops also bring the Goliath Demolitions vehicle to the party. Who could resist this pack as an addition to your army or to make a lovely little diorama… 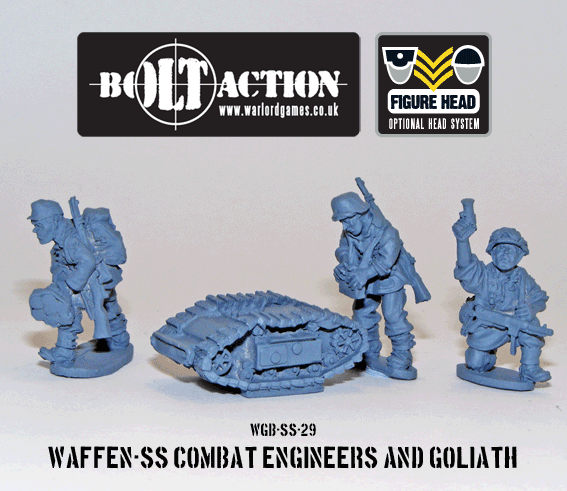 The Goliath was used by the German engineer units in a variety of roles. It was essentially a radio-controlled tracked bomb, carrying a big charge of high explosives direct to where it was needed – commonly a pillbox, minefield or disabled enemy tank. The controller steered the robot tank by using a wire connected to a simple control box.

The Goliath was fairly successful and used on many fronts, and though slow and vulnerable to small arms fire would be a frightening sight as it rumbled towards you with its deadly payload!

As with the rest of the Waffen-SS range this pack utilises the Warlord Games Figure Head System so you have lots of posing options. The pack contains a newly sculpted Goliath and three SS-Pioneers – one with multi-healed stick grenade, another with flare pistol and the last with two arm variants for either remotely controlling the Goliath or adjusting it with a wrench).

This set is available to buy now!