“Halt! Papers please!” It doesn’t get better than that! So many WW2 films, books, and comics have featured the dreaded checkpoint that we simply had to include one in our range. From the burning suns of North Africa to the Arctic Circle, the Germans loved a good checkpoint. Mind you, invading peaceful countries and subjugating them right, left and centre would lead to a resentful civilian population and a lot of papers to be in order… 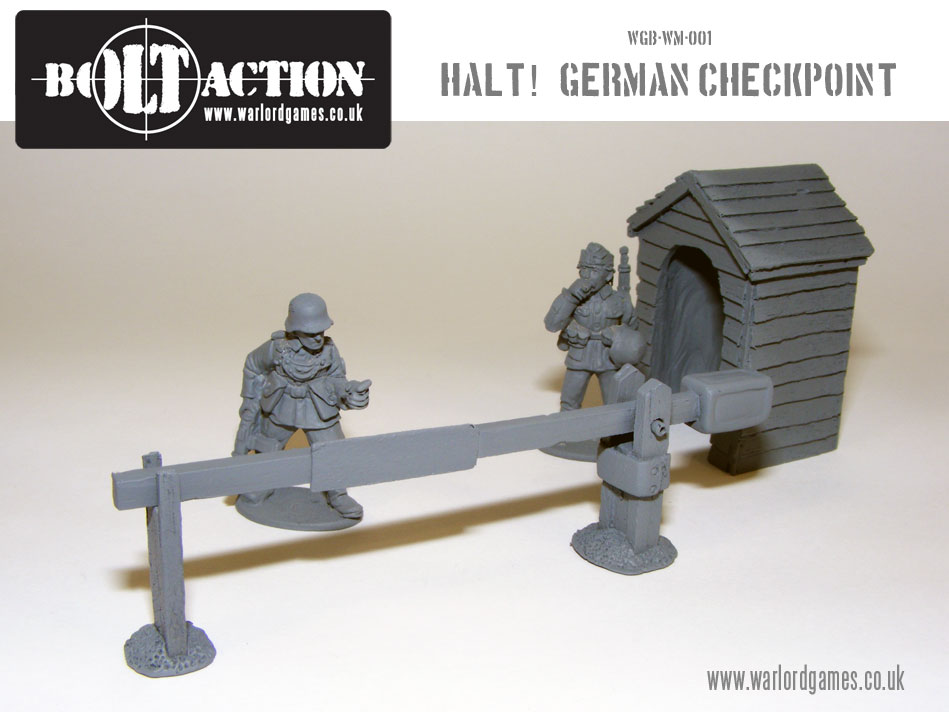 This classic set has the sentry box, no doubt with a field telephone inside, and a pole barrier, that will strategically snap in two and do nothing if rammed by any non-German driver be it motorbike or Hanomag.

Make sure you paint the hut in gaudy chevrons alternating black white and red and hang a sign saying “Halten”on the pole. Not that that will help when the good guys crash through!

To man the post we have two German soldiers, far away from home. Largely because they are in someone else country. Hans, for it is he, is shown having a crafty fag, whilst failing to look around him for commandos, partizans, paratroopers or Clint Eastwood. Let’s hope the Feldwebel doesn’t catch him!

The second fellow is a little more sinister. He is a military policeman, known as the Feldgendarme. His badge of rank is the crescent shaped gorget at his throat, and his other symbol of authority is an MP34 ready in his right hand. He is shown checking papers lets hope he doesn’t think to look in the back of the truck!

The models are available right now in the Warlord webstore. Paint ’em up and get some action and flavour on that tabletop!!!