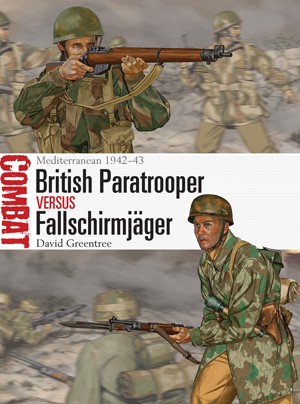 The airborne forces of Britain and Germany were among their best troops of World War II and when they met in battle the result was a brutal trial of strength. British paratroopers and German Fallschirmjäger clashed repeatedly and their training, tactics, experience, morale, and weaponry were tested against each other, not least in the three bruising encounters outlined here, in Tunisia and Sicily. From the British attempts to seize the airfields at Depienne and Oudna to the bloody night battle for Green Hill and the bitter struggle for Primosole Bridge in Sicily, these highly trained parachute troops clashed with their opposite numbers, gaining experience, refining tactics and learning valuable lessons.

David Greentree studied History at the University of York before taking a MA in War Studies at King’s College London and qualifying as a lecturer in Further Education. In 1995 he accepted a commission in the Royal Air Force and has served in a variety of locations, including Afghanistan and Oman.Johnny Shumate works as a freelance illustrator living in Nashville, Tennessee. He began his career in 1987 after graduating from Austin Peay State University. Most of his work is rendered in Adobe Photoshop using a Cintiq monitor. His greatest influences are Angus McBride, Don Troiani, and Edouard Detaille. His interests include karate, running, Bible reading, history, and making English longbows.