More reinforcements are available for your Imperial Japanese Bolt Action armies this week! Coming in the shape of Tank Hunters and a Forward Observation Team (click the store buttons for more images) they will add more flexibility to the Emperor’s forces… 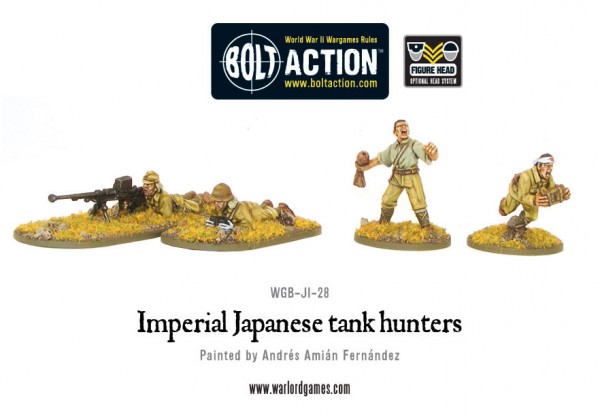 The Tank Hunters pack includes a team armed with the potent 20mm Type 97 anti-tank rifle. The Type 97’s recoil was infamous but bruised shoulders were a small price to pay if enemy armour could be stopped, quite literally, in its tracks!

In addition to the anti-tank rifle team there are two suicide tank hunters. One of these loyal soldiers sprints towards an enemy vehicle carrying a satchel charge. He knows his days are numbered but is willing to lay down his life for country and Emperor as he detonates the explosives directly onto the tanks hull. The other tank hunter readies a conical hollow charge anti-tank grenade (with it’s trademark string or rope tail giving it stability in flight). Although not as dangerous to use as the previous tank hunters weapon, the conical charge has such a short range the thrower is unlikely to survive the blast or the retribution of supporting enemy units! 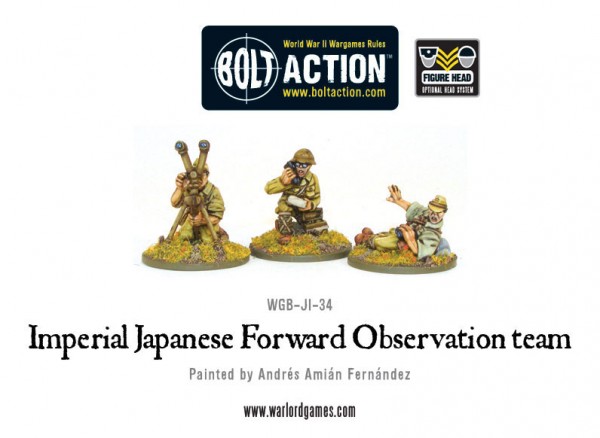 Calling in artillery and air strikes, this beautifully sculpted Forward Observation team will provide serious supporting fire for the Emperor’s brave troops. The hated British and American tanks may be better than their Japanese counterparts but they cannot stand up to the punishment these lads can call in!