We’re always excited to get article submissions from the community – here’s the first of a new batch! Kreighton’s late war germans!

Passionate about military history and tabletop wargaming? Want to see your articles in the Warlord Games newsletter and on our website?

Drop us a line at articles@warlordgames.com and we’ll work with you to produce something awesome!

Knowing that I shamelessly wanted my army to have access to all the fun German toys (MG42s, STG44s, Tigers, panzerfausts, etc…), I looked for better armed German units. This search most often brought up SS units and I, wanting to play the least-bad guy of the German armed forces, sought out Wehrmacht Panzergrenadier units.

This left me with a small pool of options.  Among them, I saw one I recognized from the book The Forgotten Soldier by Guy Sajer, Panzergrenadier Division Grossdeutschland (GD).  Additional follow up research yielded a few engagements in 1944-1945 that could historically put my army up against any late war Soviet list.  At long last my shoehorned research gave me what I wanted and it was time to put brushes to plastic.

I assembled and painted the infantry to look like veterans who had seen their fair share of action on the Eastern Front.  I gave my infantry a generous allotment of MG42s and assault rifles and a sprinkling of panzerfausts to keep those pesky T-34s at bay. 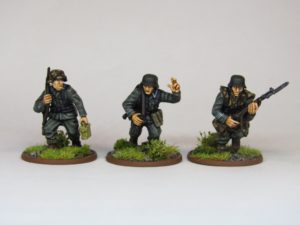 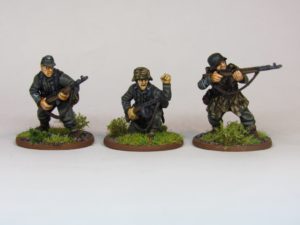 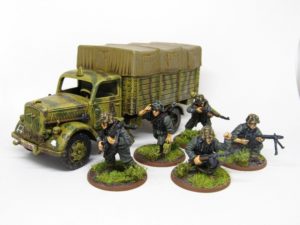 I also made a point of including some captured Soviet weapons such as PPShs and SVTs. For the armour, I applied weathering effects and mud (maybe a little heavy on the mud) to give my armour a messy and battle-weary look.  The GD was well equipped during its years on the Eastern Front with all kinds of weapons and tools.

One of the most obvious painting details I needed to deal with was the cuff titles worn by elite formations.  The cuff titles for Wehrmacht units were worn on the right sleeve halfway between the elbow and the wrist while their SS counterparts wore their cuff titles on their left.  In addition to the cuff titles, GD infantry often had a stylized “GD” embroidered onto their shoulder boards. 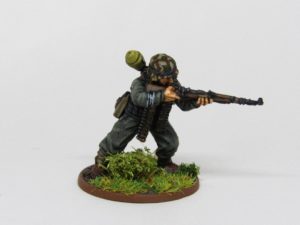 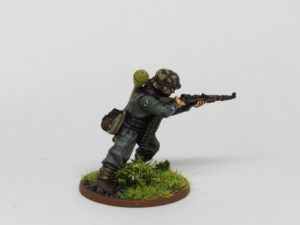 While my hand isn’t steady enough to paint the “GD” on my infantrymen’s shoulder boards, I did dab some paint where they should be to honour their elite status. As a veteran formation, GD soldiers had opportunities to accumulate combat accolades of all kinds. To reflect their experience, I added a few Iron Crosses as well as Tank Destruction Badges sprinkled in among the models.

Inspired by Kreighton’s fantastic effort? Want to lead your own regiment of Panzergrenadiers into battle? Our late war German plastics are packed full of characterful miniatures that can be customised and kit-bashed to your heart’s content. Grab the starter army to kick off your collection with a bang! 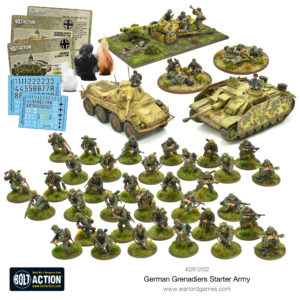 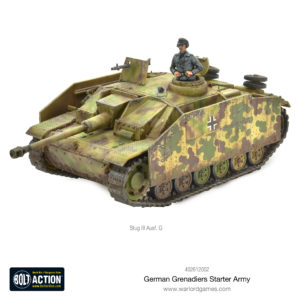 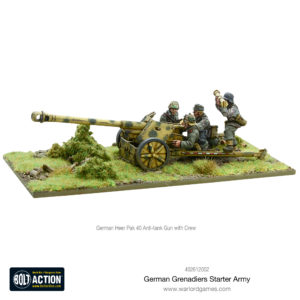 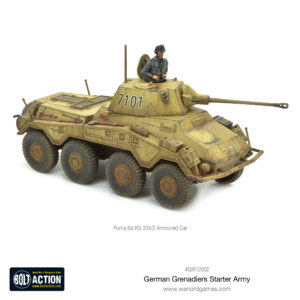 Tom spends most of his time buying books and painting miniatures. He enjoys putting animals on the bases of his miniatures and half-finishing side projects. Some say that he lives in a tower on top of some windswept northern hill with his wife and cow-patterned cat, Spaghetti.
View Profile | View all posts by Tom Mecredy
Cruel Seas: PT Boats – the Barge Busters!
Victory at Sea: Carrier Operations