Jones and McTavish do Normandy

Warlord Games overlord John Stallard has been spending a lot of his spare time building his British army force ahead of the release of the Bolt Action rules later this year. This week John has added more to his fledgling army…

John: The recent bank holiday (why do bankers need more time off?) gave me the chance to either watch a local Napoleonic re-enactment or paint more Bolt Action Jocks and Taffs. No contest! 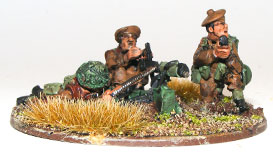 I love our Vickers medium machine gun so adding one of those (for now!) was a given. I gave it a Highland crew, popping on the metal Highlander “heeds” to a couple of crew whilst one more sensibly keeps his tin hat on. I popped a couple of packs on the ground from the spares box too. 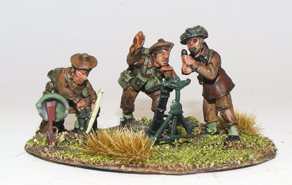 The 3″ mortar is a must-have addition to any British Company. Again using a mix of helmets and Figure Heads I have made it a Scottish mortar (McMortar?). One of the men is wearing the useful waterproof and warm leather jerkins, much prized by Tommy. I dug a spare shovel into the ground to suggest they have been digging in the baseplate a bit to give a firmer firing platform. 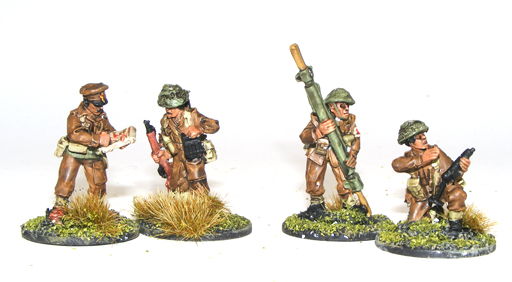 My command squad is the metal pack – an Officer in peaked cap, radio operator, stretcher bearer and Corporal. The radio man has the special head with attached earphones. In combat the Officer may be wiser to drop the cap and map and grab a Tommy Bowler and rifle as he stands out like a sore thumb to any Jerry sniper.

The stretcher bearer wears a Red Cross arm band and carries a folding stretcher. In general medics were not fired upon in the West and they were of great service to the British and Commonwealth forces (and to wounded Axis soldiers too).The Corporal is kneeling, barking out orders with Sten gun in hand – classic stuff.

The PBI (poor bloody infantry) are from the Warlord Games British Infantry plastic boxed set, and what a box it is! Masses of kit, weapons and all manner of options. I wanted a section moving forward, firing as they went, so most are ready to blaze away with their SMLE’s. Being prone to getting stuck in, I gave the Jocks bayonets.

The mix of headgear gives them a more aggressive, wild look, One fellow is completely bareheaded, but even if wearing the Tam o’Shanter they have their helmets on their belts in case Jerry starts shelling. 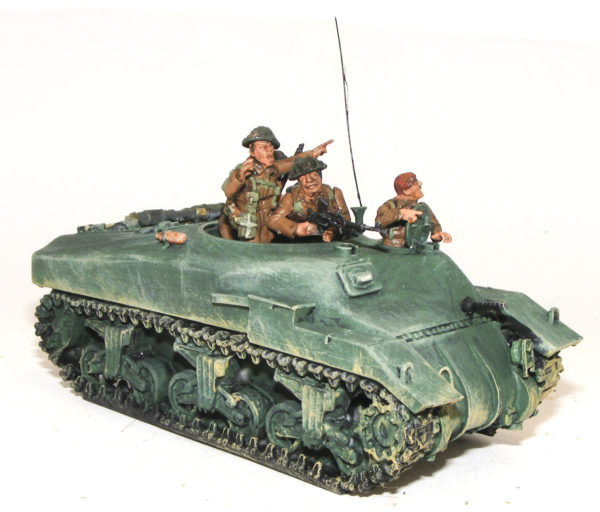 Why walk when you can ride? These chaps have hitched a ride in one of the new-fangled Ram Kangaroos which the Canadians invented in ’44. It was simply a tank or self-propelled gun with the gun/turret removed so the PBI could take an armoured taxi straight up to the front line – no more lorries for them!

I painted the Kangaroo deliberately in a rather more striking green as British army paint varied in colour and these being workshop conversions they may well have been painted locally as the armourers patched up old vehicles and added plate where they could. I converted a gunner who is half out of his hatch pointing to where there passengers wanted to go.Crew figures really lift any vehicle so any chance, pop one in – it transforms the vehicles. 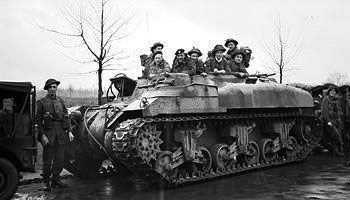 The Kangaroo could officially take 14 men but its easy to see that up to 20 were carried in extremis (no one liked to walk if they could help it). There was no overhead cover, the lads just kept their noggins down. I took Mark Owen’s advice and made a small base which fits perfectly into the carrier.I then cut about 4 plastic Tommies and crammed them together, painting them as a group once assembled. It was terrific fun, and ended up with another Tommy pointing out the direction they wanted their taxi to go..It all helps to tell a story, in my mind anyway!

To set off the vehicle I added a good few back packs as the Tommies would have thrown their lit on the back if cramming in for a long drive.To finish it off I included a PIAT slung on the back, no room for that inside! I then weathered it up, applying a good coat of mud around the tracks and giving the vehicle a good coating of dust with a strong drybrushing of light grey. 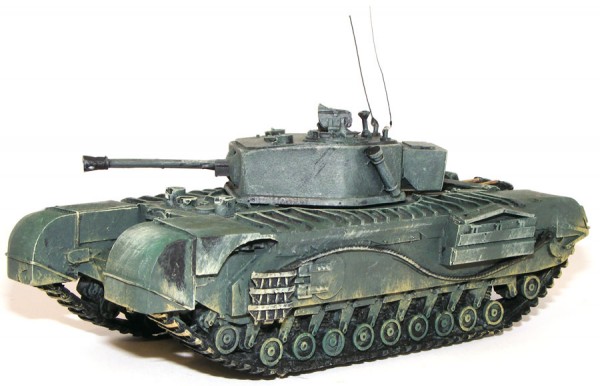 Talking of tanks, who can possibly resist the mighty Churchill – a tank so ugly that only its crews could love it? But love it they did. Its main gun and two Besa machine guns gave it good hitting power and it had legendary trench and hill climbing ability. Where it excelled though was in its tough hide. The front of the Churchill turret was thicker than a Tiger’s, most useful in the close assaults that the British forces had to do in Normandy and beyond.

My tank has been weathered up to look like it had been in action. I added 2 aerials, just bristles from a nylon broom, but they do add to the effect. I left the turret hatches open to represent the commander popping his head in and out. I have not yet added Allied stars and divisional markings, but I will but I wanted them on the tabeltop double quick and giving the Jerries hell.

Next is another squad – Taffs next time I think, an anti-tank gun (6 pdr) and maybe a Quad and 25 pdr. Always wanted to try that ‘Mickey Mouse’ camo scheme…