We’re taking a look at one of the forgotten heroes of the French-Indian War – Jean-Baptiste De Langis became the nemesis of Rogers and his Rangers!

Jean-Baptiste De Langis, or ‘Langy’, as the British knew him, was the quintessential French partisan soldier and is regarded as one of the most famous names of the war, although it is unlikely that you will have heard of him.

Langy was commissioned in 1755 with the rank of ensign in the Colonial Marines. Some sources state that he took part in the Battle of the Monongahela, although this is uncertain. However, he quickly showed promise and by June 1756 he was leading scouting parties around Oswego and gathered prisoners and intelligence that contributed to the fall of the fort in August that year.

Montcalm was so impressed by his abilities he wrote: “Sieur Langis de Montegron has never ceased being used for the most interesting of scouting, also the most laborious, and who has always distinguished himself.”

In 1757 he led raids in the area around Fort Edward with a war party of about 100 Indians, surprising a British wood cutting party, killing 20 and capturing about 12. in July that same year he was employed raiding and ambushing along the road from Fort Edward to Fort William Henry, cutting off supplies to the British fort.

By 1758, he was regarded as one of the best partisan officers in the army, with Montcalm simply writing: “Langy excellent … all the rest not worth mentioning.” He encountered Robert Rogers in March at the Battle of the Snowshoes, and, some say, defeated him, killing or capturing most of Rogers’ force. He was then engaged in scouting against the forces moving to besiege Fort Carillon at Ticonderoga.

Such was his fame that French regular officers volunteered to serve under him in order to gain experience, so much so that Bougainville wrote: “A captain and seven lieutenants of our regulars march under the orders of an ensign.”

He is credited with being involved in the skirmish at Bernitz Brook where Lord Howe was killed, although his exact role is not clear. He was then wounded serving in the line at the Battle of Ticonderoga. In 1759 it was a force led by Langy that discovered the whaleboats and canoes being used by Robert Rogers to raid the settlement at St Francis, and he was one of the French officers who pursued Rogers’ force, killing or capturing many of them. 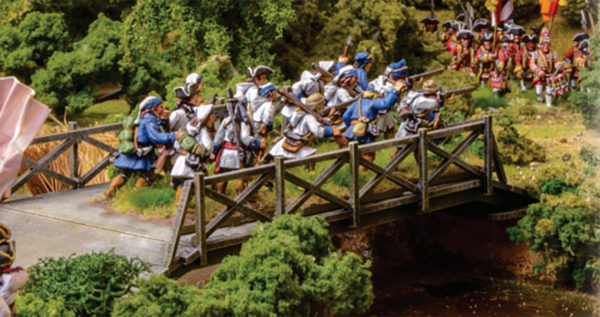 Jean-Baptiste was to have his last encounter with Rogers in February 1760, when he led a force which once again ambushed Rogers as he was leading a line of horse-drawn sledges across the ice to Crown Point, although Rogers once again escaped with seven of his men, Langy killed nine rangers and captured 32 new muskets, 100 hatchets, 55 pairs of moccasins and the Crown Point payroll of £3,961!

Langy met his end whilst scouting the British forces advancing on Montreal when he drowned at
Isle Saint Paul.a newspaper recorded: “Mons Longee, a famous partisan fell through the ice sometime and was drowned … his loss is greatly lamented by all Canada and his equal is not to be found in that country.”

Langy was an expert at ‘La Petite Guerre’ and excelled at warfare in the wilderness of New France. As is always the way, history is written by the victors, and so Langy’s name is forgotten outside of his native Canada whilst the name of his nemesis, Robert Rogers, lives on.

Scenarios covering De Langis’ greatest exploits, along with rules for him and his company of hard-bitten guerillas can be found in the new Black Powder supplement; Dark and Bloody Ground! 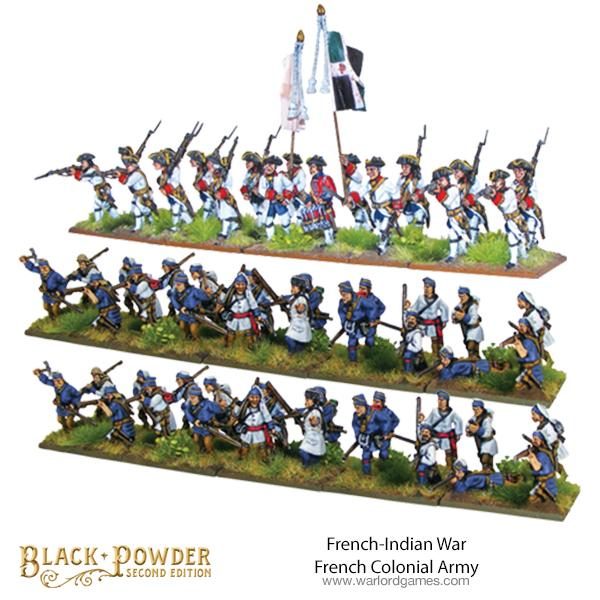 Tom spends most of his time buying books and painting miniatures. He enjoys putting animals on the bases of his miniatures and half-finishing side projects. Some say that he lives in a tower on top of some windswept northern hill with his wife and cow-patterned cat, Spaghetti.
View Profile | View all posts by Tom Mecredy
New: Basing Materials – 10mm Tufts
Spotlight: Amunhotep Crosses the Orontes