Warlord Games production supervisor, Pete Wright, has been working on a series of conversions, bringing some of the rarer and more unusual vehicle variants to the tabletop battlefield. The latest creation to roll-off of the production line is a captured Bren Carrier, adapted to carry a German 2cm Flak Gun! 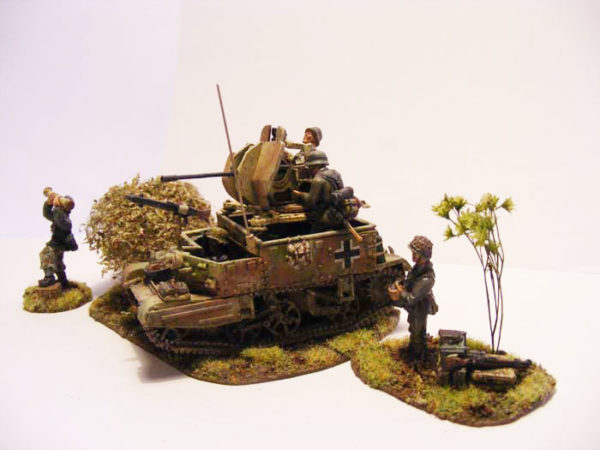 Pete: After browsing the internet to find some modelling information, I came across  pictures of a Bren Carrier captured by the Germans who had fitted a 2cm Flak Gun on top and a conversion came to mind.

Looking at the reference pictures, I decided to add some bits – as you do. The first were the brackets around the side and front armour, the small side light, the bracket for the main headlight, the spring towing hook, the mount for an MG42, and a rear view mirror. 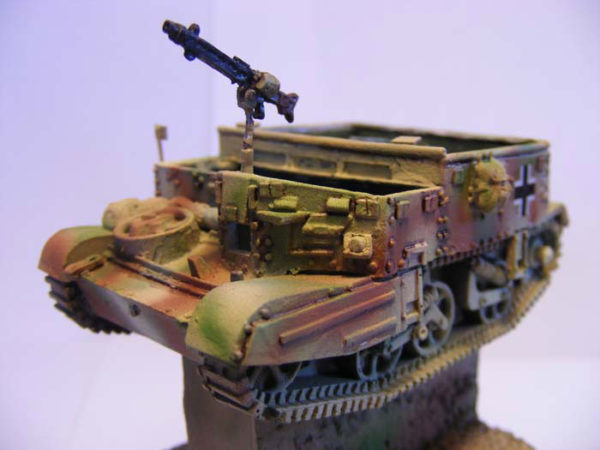 Next, on to the flak gun and the only addition was a part for the sights and to drill out the end of the gun barrel. 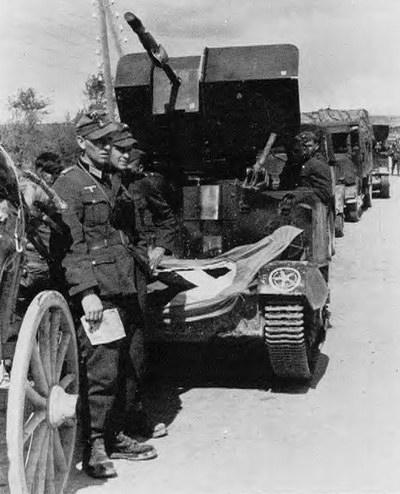 On looking at the gun sat on the carrier, I decided to add an extra crewman to act as a second loader – he came from the Late War German Infantry plastic set – converted to hold an ammo clip to feed the gun.

On to the painting – the figures were undercoated white and the carrier black. All the paints used were Vallejo, Army Painter, and Windsor and Newton inks.

The carrier and flak gun were sprayed German Yellow, then this was lightened with a mix of yellows and ivory. The camo was then added with Saddle Brown and German Camo Bright Green (both lightened with Basic Skin Tone.)

The tracks are painted a 50/50 mix of Black and Flat Brown, and are then washed with a mixture of weathering powder and Buff to give a dusty effect. The high points of the tracks were picked-out by rubbing a pencil across them so the graphite attaches to the tracks. I added  signs of wear on the sprockets and track teeth with a silver pencil in a similar fashion. The rubber rims were painted Black Grey with a black ink wash – and then everything was given a Peat Brown ink. 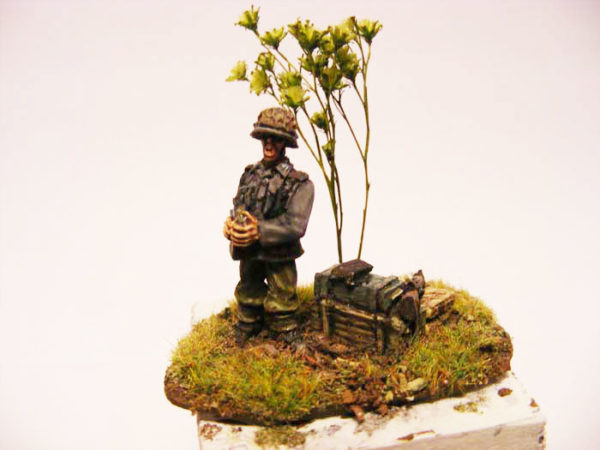 The flak gun is painted and weathered the same as the carrier – the gun barrel is first painted Black Grey, followed by a black ink wash, then watered down blue ink. To finish it off, it is rubbed with a pencil, and washed in Peat Brown Ink.

The crew uniforms are painted in different shades of field grey, greens, green brown, and olive green plus I specifically tried to give a worn and faded look. The gun commander was given a  pair of camo trousers to add a bit of contrast to the rest of the crew.

The crewmen figures are supplied with separate heads – I prefer to paint them before I attach them to the bodies. To do this – I drill them and attach them to a short wire to be able to handle them while painting. Once painted, I drill in to the body, cut-down the wire to fit, and glue the heads on to the body.

The small scenic base has been created from plasticard – which I covered in my own base mix (made from powdered household filler, brown paint, white glue, sand, and water.) Once dry, a 50/50 mix of white glue and water is painted on and sprinkled with dry, sieved Garden Soil (you can’t beat the real thing!).

The small tree is a twig supplied by the privet hedge from my front garden! The fine branches are artificial hanging-basket line (more like a wool in browns and greens) stuck-on with White Glue. When dried – out came the scissors to trim to shape. The base is then masked and the tree sprayed with PVA glue and sprinkled with dried mixed herbs. 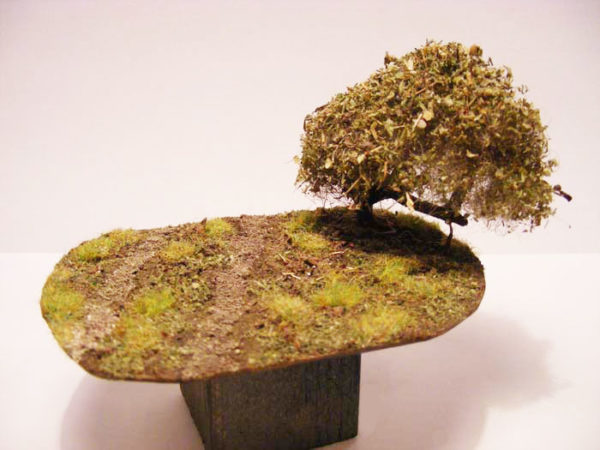 The grass is clumps of static grass along with dried contents of tea bags, more herbs, loose tea, and birch seeds. The track is made from fine sand, with a Peat Brown ink wash and dry-brush of buff.

I added a few little extras to add more narrative to the model – empty shell cases were cut from small lengths of brass wire, stuck-down with PVA glue. The radio and headphones were made from fuse wire, and plastic rod – the aerial mount is plastic rod and tube, and the aerial itself  is made from guitar string. 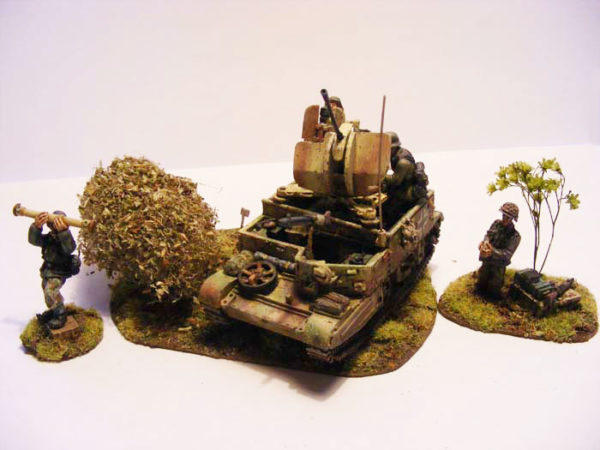 After looking-over the completed carrier, I decided to make the gun detachable to be used as a standalone piece on the base as a ground-mount. This left the carrier with the mounting brackets for the gun. To get around this and use the carrier on it’s own – I made a rolled camo net of Gauze – the carrier was covered with clingfilm, the gauze soaked in white glue and draped over the brackets and left to dry. Once dry it was painted and drybrushed and now fits snugly when the gun is dismounted and can be used separately – job done! 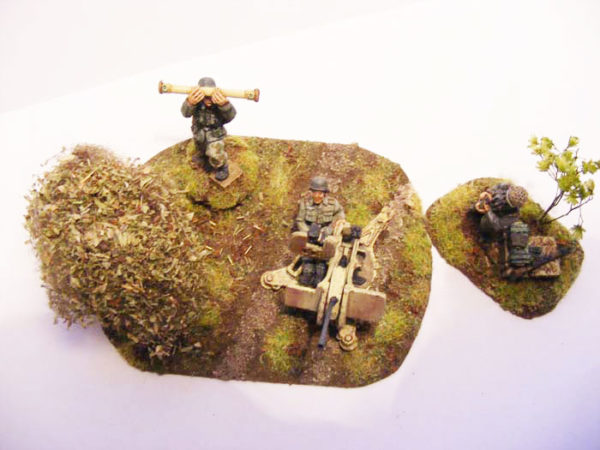 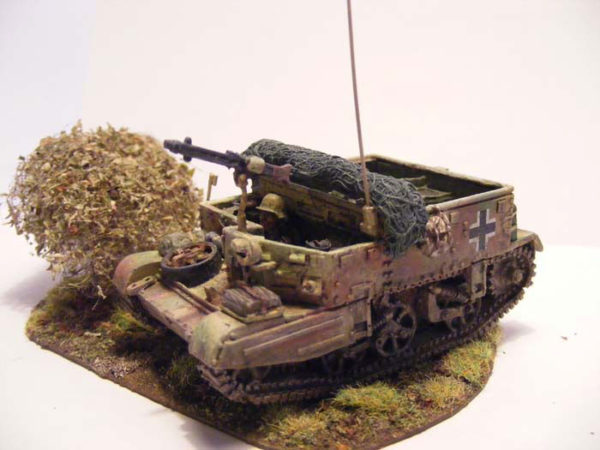 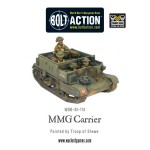 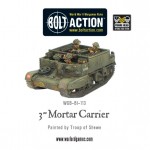 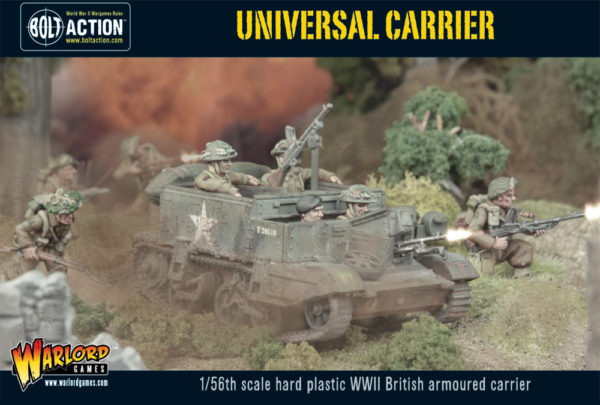