Preparations for the commemorations of the 75th D-Day anniversary are commencing across the world, as part of this, we’ll be taking a look back at some of our articles with a focus on this period – beginning with; History: The Filthy 13…

A while back we ran an article on a new ‘Shop’ now holding our Bolt Action range, the Overlord Museum at Colleville Sur Mer. Not long after we were happily surprised by an email from the museums designer Steve Davis taking us through the development of the museum along with great pictures as the museum came together (Check it out here). Steve again used his contacts and knowledge to bring us a new insight into a very famous photo: 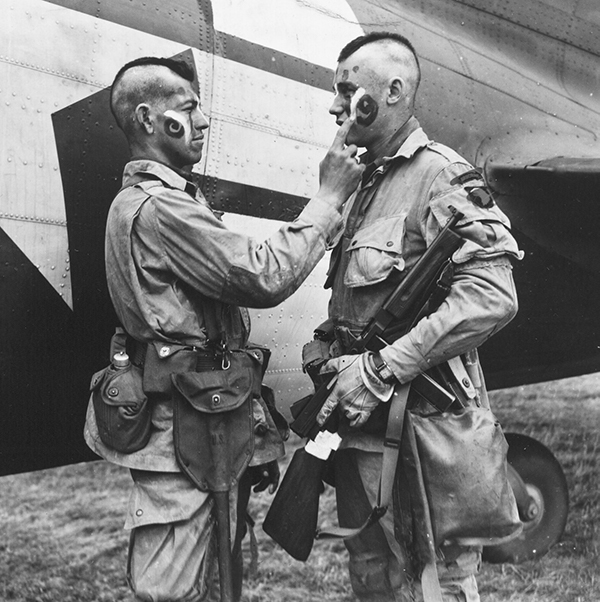 A number of photographs taken during the Second World War have acquired near legendary status, arguably none more so than a single image showing two members from the 1st Demolition Section, Regimental HQ Company of the 506th Parachute Infantry Regiment, 101st US Airborne Division. 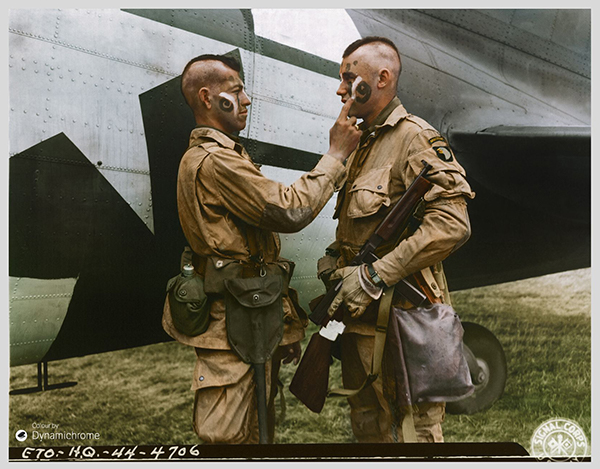 A modern colour version of the original photograph

The photograph was taken on the eve of D-Day, by a Signal Corps army photographer. The image is of Clarence Ware applying ‘Indian war paint’ to the face of Charles Plaudo. The black and white paint being used is the same as that which was hurriedly painted onto the wings and fuselage of every combat and transport aircraft that would ﬂy over the landing beaches of D-Day.
This dramatic image had real propaganda value, however, the actions of these men had been prompted earlier by the unit Sergeant, Jake McNiece. He had decided to cut his hair ‘Mohawk’ style claiming it was ‘to prevent head lice’ and applied paint to his face to aid personal camouﬂage both reasons being perfectly plausible, others in the squad took their lead from him. 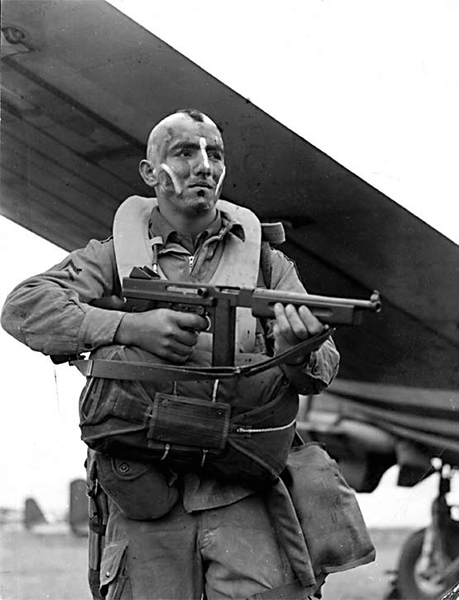 Jake McNiece was part Choctaw Indian by birth and had a rebellious nature when it came to authority. The Demolition Section were a rebellious group involved in dangerous training, they really could not see the point of many military rules such as saluting, regular bathing or uniform changes, after all in the ﬁeld the niceties of life would be ignored so why not carry out their training in the same way.
This general attitude led them into frequent conﬂict with their commander, Colonel Sink, ( yes, he of ‘Band of Brothers’ fame). The squad became known as the ‘Filthy 13’ although numbers of the squad would ﬂuctuate, the name stuck.

Attempting to sort fact from ﬁction with the photograph is difﬁcult as many varied accounts have been written including those by members of the ‘Filthy 13’ this makes getting a deﬁnitive account impossible. What we can do is stick to the known facts. 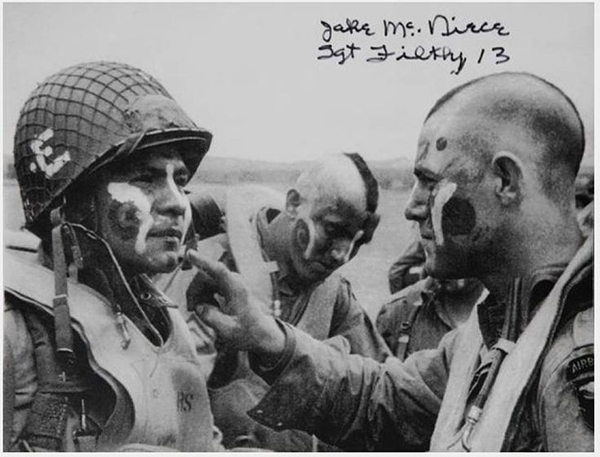 The squad was tasked to destroy some bridges and secure others over the Douvres River, inland from Utah Beach, in the early hours of D-Day near to Saint-Mere-Elise and Carentan. this dangerous mission was carried out amidst the chaos of a night drop where paratroopers were scattered all over the French countryside, by sheer determination and spirit, the members of the ‘Filthy 13’ accomplished their tasks.

On returning from combat the survivors of the squad discovered their newfound fame, their photographs had been seen by a ‘Stars and Stripes’ war correspondent, Tom Hoge and he had written about them on 9 June.

September 1944 saw the unit in action as part of Operation ‘Market Garden’ in Holland, holding bridges along highway 69 around Eindhoven. After this operation some members of the Demolition Squad decided to transfer to the 101st Airborne Division Pathﬁnder Company, it is likely that they did this anticipating an extended period of training back in England with the possibility that the war would soon be over.

The Ardennes offensive launched in December 1944 meant that the Pathﬁnders were parachuted into Bastogne to set up beacons for C-47 Skytrain supply aircraft. The subsequent airdrops of supplies and ammunition were crucial for the survival of the 101st Airborne Division. Some of the 13 were deployed at Remagen in early 1945 with a ﬁnal combat jump into the Siegfried Line in February.

After the war the accounts of Jake McNiece and the ‘Filthy 13’ were published, all are worth reading as they contain recollections from combat veterans. There is no link whatsoever between the factual accounts of the ‘Filthy 13’ and a certain film and novel titled ‘The Dirty Dozen’.

At a time when 2 combat parachute jumps were considered to be the life expectancy for paratroopers then 4, carried out in fairly extreme circumstances, is remarkable.

My own personal view is that the haircuts and face painting was done to keep men occupied whilst they waited, to keep their morale up and try to stop them thinking about the dangers they might face. The ‘Filthy 13’ and their story does prove that truth is stranger than fiction.

Whilst researching this story I did ﬁnd other instances of similar extreme haircuts carried out by other units, a US Navy gun crew with their hair cut to spell the word ‘HELL’. 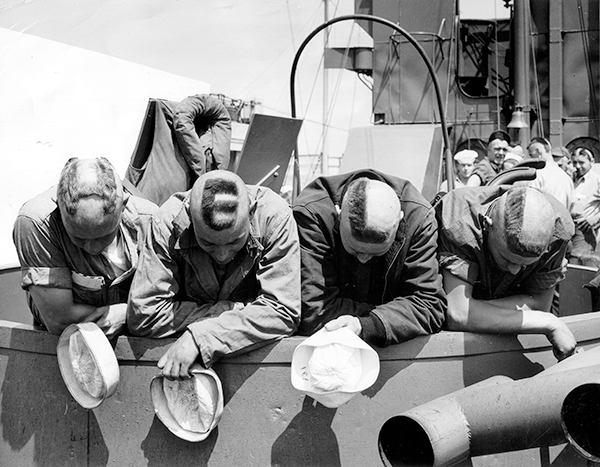 Canadian paratroopers, known as the ‘Victory Riﬂe Platoon’, had their haircuts with the ﬁrst two men having 3 dots and 3 dashes, morse code for ‘V’, the remainder of the platoon spell the word ‘VICTORY’. 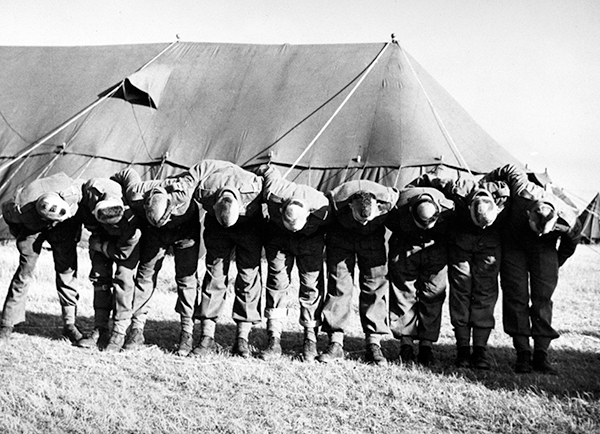 ‘The Filthy Thirteen’ by Richard Killblane and Jake McNiece published by Casemate, 2003.

Represent your Filthy 13 with the plastic US Airborne troops, either as a platoon or as a squad within Band Of Brothers: 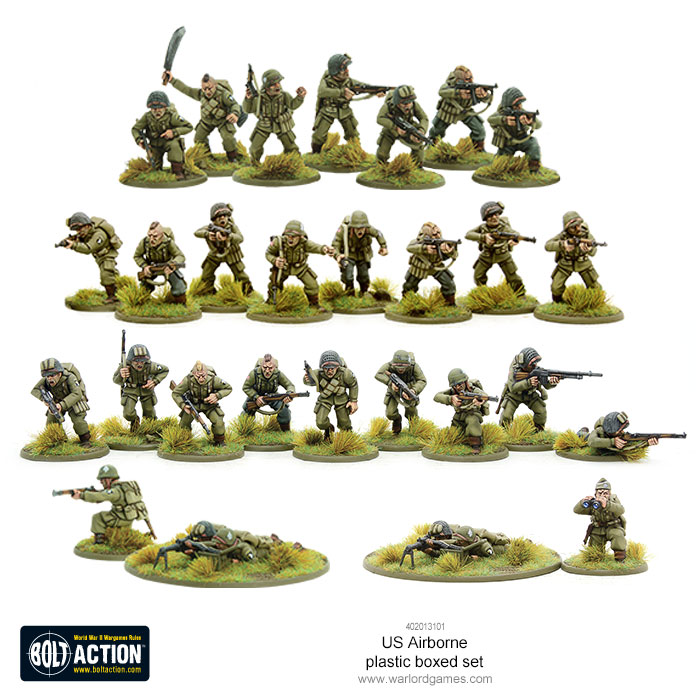