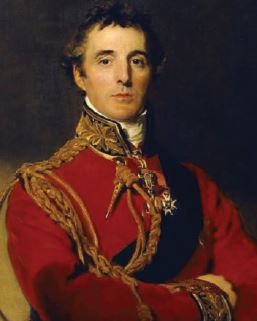 Born in Dublin in 1769, this remarkable man had a very unexceptional life prior to joining the British Army in 1787 as an ensign in the 73rd Highlanders. Family influence and money eased his way through the ranks, as he took advantage of the Purchase system to buy one promotion after another.

By the time the Duke of York undertook the 1794 Flanders campaign, Wellesley was a Lieutenant-Colonel in the 33rd First Yorkshire/West Riding Regiment. Although the campaign was a failure, Wellesley ended it in charge of a brigade. In Flanders he learnt numerous lessons, not the least of which was the use of steady lines delivering volley after volley against advancing columns. Chiefly, however, he recognised the effects of poor command and control, and later said of Flanders “At least I learned what not to do, and that is always a valuable lesson.”

His star began to shine when he was given command of an expeditionary force in India to suppress Tipu Sultan’s rebellion in 1799, which he did skilfully, crushing the revolt at the siege of Seringapatam. In 1803 he won further fame with success against another Indian rebellion at the battles of Assaye and Argaum. Knighted in 1804, by 1808 he was a Lieutenant General assigned to the expeditionary force to the Iberian Peninsula as second in command to the incompetent Burrard. The rest, as they say, is history.

The Iron Duke, as he was later known, was a decisive commander who did not flap when he came under severe pressure. Cool and brave in the face of the enemy, he was the advocate of the reverse slope tactical doctrine. He was careful with his men’s lives and so became loved by the Army.