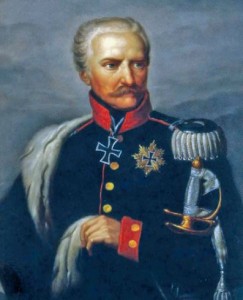 Born in Rostock, Mecklenburg the son of a land-owning family, Blücher was destined for military service.

In 1758, at the age of 16, he joined the Swedish Army as a hussar, to fight against Prussia in the Seven Years War (1756-1763). Blücher was captured two years later whilst fighting against Prussian hussars. The Prussians were so impressed with the way that Blücher had fought that they inducted him into their ranks. He rose through the ranks to become a captain, but he was passed over for promotion due to staging the execution of an unruly priest. He then had his subsequent resignation letter accepted by Frederick the Great, who told him to “Go to hell!” He then took up a rural life of farming for the next 15 years during which he was married and raised seven children.

In 1786 Frederick the Great died and Blücher immediately returned to the army as a major in his old regiment. He quickly gained promotions and following sterling service in the Revolutionary Wars he was promoted to Major General.

During 1806 he led cavalry formations during the disastrous campaigns of that year, although his reputation remained intact. His military governorship of Pomerania came to an end in 1812, when he went too far in expressing his disgust at Prussia’s alliance with France against the Russians. He was recalled from Pomerania and publicly rebuked by the King.

The War of Liberation of 1813 saw Blücher back in favour. He commanded at the bitter defeats against the French at the battles of Lützen and Bautzen, yet defeated Napoleon at the climactic battle of Leipzig. He assisted greatly in energising the allied war effort to take the war onto French soil. Although Blücher suffered many defeats at the hands of Napoleon the wily old Field Marshal finally defeated the Emperor at the battle of Laon in March 1814.

Blücher was at the head of the Army of Silesia that seized the French capital shortly afterwards, bringing Napoleon’s reign to an end. To celebrate the victory over the French, Albion invited the heads of state of her allies to several events in England in June 1814. Blücher was Prussia’s representative and proved a popular figure with the English crowds. When Napoleon returned to power, Blücher took command of the Prussian Army of the Lower Rhine and led them to a final victory at Waterloo.

Loved by his men, who knew him as ‘Papa Blücher’, he in turn referred to his soldiers as ‘Meine Kinder’ (my children). Shortly after the great victory of Waterloo, the tired old commander retired to his estate at Krieblowitz in Silesia. Blücher died at the age of 76 in 1819.