During their ‘island hopping’ campaign, the US Marines were tasked to take the heavily fortified island of Iwo Jima, in the Volcano Islands, the first area that was universally considered Japanese home territory. This battle was to become arguably the most famous engagement in the entire Pacific War. It was different from most other similar island invasions for a number of reasons, starting with the fact that all the civilians had been evacuated from the island, so there were no civilian casualties (a detail which makes it very good for wargaming). 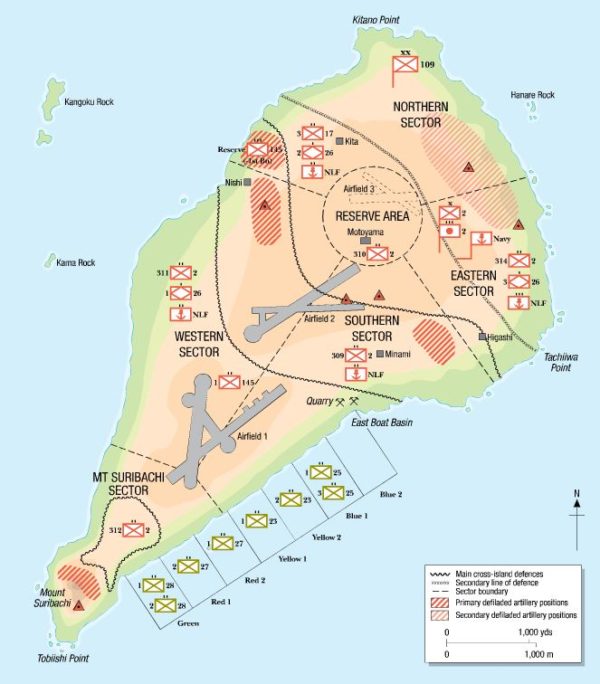 Moreover, the garrison commander, General Kuribayashi, adopted a very different strategy from the usual Japanese doctrine. He knew he was completely cut off and had no naval or air support (except for a few kamikaze pilots), so he dug in deep and gave two orders that made all the difference.

The first difference was that he did not build any defenses on the coast itself, where they were normally easy targets for the Americans’ colossal preliminary bombardment from air and sea. Instead, he had his troops prepare a massive network of fortifications and tunnels inland, where his troops and artillery pieces would weather the US Navy’s fire and survive almost unscathed. The Japanese would then not oppose the landings, but rather let the Marines mass on the beachheads before starting a deadly concentrated fire against the beaches crammed with men and materiel from both well-concealed machine-gun posts, and pre-ranged artillery and heavy mortars.

The second unusual order was that Kuribayashi specifically forbade his officers to lead the men in ‘banzai charges’ against the Marines, as he was convinced that these human wave tactics were far too costly. Instead, he instructed his men to use the fortifications and the network of tunnels to their advantage as much as possible, fighting to the last bullet and making the invaders bleed for every foot of that small, desolate island. It was typical for Japanese soldiers to reoccupy bunkers that had been previously ‘cleared’ by the Marines, using disguised entrances from the tunnels, and starting to fire at the backs of the advancing Marines. The fighting soon became bloody, and very few prisoners were taken by either side. 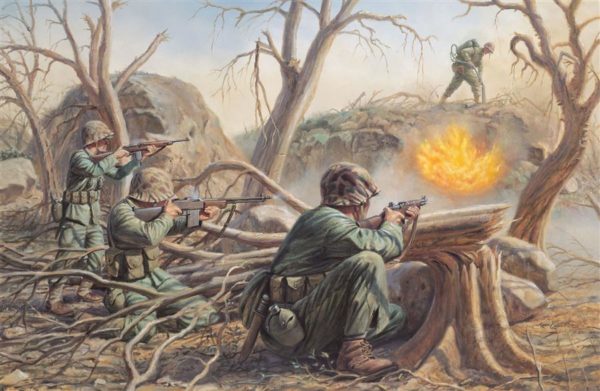 On the fourth day of the battle the 21st Regiment were faced with a stubborn complex of bunkers and anti-tank guns adjoining Airfield No 2 in the center of the island. Maj Houser called upon 21-year-old Cpl Hershel Williams, the last of his flamethrowers, to go forward escorted by riflemen. With complete disregard for his own safety, Williams moved from one position to another, burning out bunkers and strongpoints, until the way ahead had been cleared. He was the first 3rd Division Marine on Iwo Jima to be awarded the Medal of Honor. Iwo Jima 1945 courtesy of Osprey Publishing.

The strategic thinking behind both orders was to inflict enough casualties on the Americans that an invasion of mainland Japan would become unthinkable. His tactics were indeed very effective – Iwo Jima is the only battle in the entire Pacific campaign where the US casualties (if one includes WIA) were higher than the Japanese. Nevertheless, of the initial Japanese garrison of 22,000 men, only slightly over 200 were taken alive (plus roughly 3,000 survivors who continued a guerrilla-style resistance for years after the island’s capitulation). Together with the horrors of the Okinawan campaign, Iwo Jima was one of the factors that led the US towards making use of the atomic bomb to conclude the conflict without having to embark on an invasion of Japan.

Learn more about the Island campaigns and the war that engulfed the pacific in our Bolt Action Campaign book Empires in Flames – the Pacific and Far East.