The battle for Alligator Creek is officially known as the Battle of the Tenaru. 6,000 troops from the Japanese 28th Infantry Regiment, the Yokosuka Special Naval Landing Force, and 35th Infantry Brigade were tasked with retaking Guadalcanal. The spearpoint of the Japanese assault would be 916 experienced combat troops of the 2/28th Battalion led by Colonel Kiyono Ichiki. The 2/28th Battalion landed Taivu Point on the night of 18 August 1942 and 800 troops immediately advanced west along the coast towards Henderson Field. The Japanese believed Henderson field was held by a small USMC raiding party. 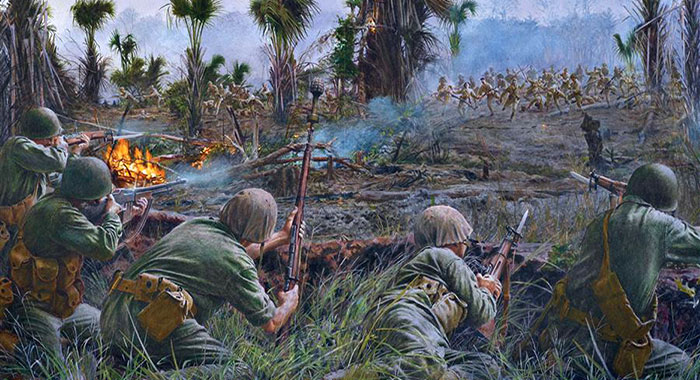 Sergeant Jacob Vouza of the British Solomon Islands Native Police Contingent was soon captured by the advancing 2/28th Battalion, and tortured for information. He was bayoneted several times in the neck and stomach. Left for dead by his captors, Sergeant Vouza chewed through his bindings and in a seriously wounded state raced ahead of the advancing Japanese to Alligator Creek, where he warned the 1000 men of Colonel Edwin Pollacks, 2nd Battalion 1st Marines that the Japanese were coming. (Sergeant Vouza survived the war and was knighted by the King of England for his heroism).

No sooner had the Marines withdrawn to the west banks of the creek, the Japanese arrived marching in formation along the beach, then halted at a single strand of barbed wire blocking their path. The battle commenced at 2000hrs with the Marines opening fire on the Japanese who quickly withdrew.

At 0310hrs on the 21 August, the Marine positions were hit with heavy mortar and machine gun fire followed by a full frontal Japanese charge along the sandbank. Marine gunners used two 37mm anti-tank guns firing canister to decimate the attack. Colonel Ichiki is believed to be amongst the dead but his body was never found. Further Japanese attempts to cross the river using human wave tactics failed. A last attempt is made to assault through the surf but that too was defeated.

Sensing victory, the Marines counterattacked along the beach using light tanks. With the support of aircraft from Henderson Field, 1st Battalion 1st Marines crossed the river to the south and enveloped the Japanese positions. At 1700hrs the battle was declared over. 774 Japanese had been killed and 15 taken prisoner. Only 44 Marines were dead – a resounding US victory.

Note – There were no alligators in Alligator Creek, only crocodiles…