This week, we’re looking at some of the interesting personalities you can add to your British & Commonwealth forces during our D-Day campaign! 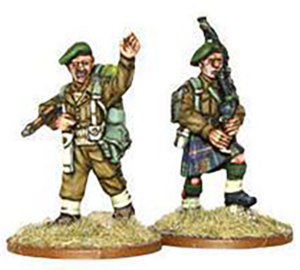 Aristocratic and haughty, Lovat nonetheless inspired confidence in his men through his utter contempt for danger and his fearless leadership. Simon Fraser, the 15th Lord Lovat and head of the Fraser Clan, came from a long military lineage going back at least five hundred years. After attending Oxford University, Lovat joined the army and in 1931 transferred to the Scots Guards as a Second Lieutenant. In 1937 Lovat resigned his commission and returned to his estate.

Two years later with the threat of war looming, Lovat was recommissioned a Captain with the Scots Guards. In June of 1940 Lovat joined the commandos and was assigned to No. 4 Commando. In April of 1942, after gaining promotion to the rank of Major, Lovat led his first commando operation. The operation was a raid on the French coast at Hardelot. His conduct on this raid earned him the Military
Cross. The citation for the award emphasized his cool and clear leadership under fire.

In August of 1942, Lovat’s role in the Dieppe raid cemented his reputation. No. 4 Commando under Lovat’s command was the most successful unit of the entire operation. They achieved their objective, the destruction of a heavy gun battery while sustaining the lightest casualties of Operation Jubilee. Lovat was awarded the Distinguished Service Order for his outstanding leadership and bravery in what was otherwise a disastrous operation.

With the establishment of the First Special Service Brigade in November of 1943, Lovat was promoted from Lieutenant Colonel to Brigadier and given command of the brigade. The brigade, one of the most elite units in the British Army at the time, was given the vital D-Day mission of linking up with the 6th Airborne, a mission he was confident his men could achieve. On June 6th, Lovat landed on Queen Red beach
with the piper Bill Millin in tow playing highland tunes on his bagpipes at Lovat’s request. For not the only time on D-Day, the men witnessing Lovat and Millin could not believe their eyes as they casually strolled up the beach under heavy fire to the cheers of the men taking cover behind the sea wall.

Lovat himself wore a white jumper under his battledress, sported an American carbine and wore polished brogue shoes. When German machine gun fire kicked sand up on to his shoes he was more concerned about flicking sand off them than reacting to almost being hit. His total dismissal of the danger present was an inspiration and a morale booster to the men that witnessed his conduct on that day. Under his leadership, the 1st Special Service Brigade was able to meet its D-Day objectives on schedule to the delight of the Airborne units relying on their relief. For his D-Day exploits, the French awarded Lovat the Légion d’Honneur and the Croix de Guerre. After six days of hard fighting in the Orne bridgehead, Lovat was seriously wounded and evacuated back to England. He would eventually recover from his wound but not in time to see active service again. 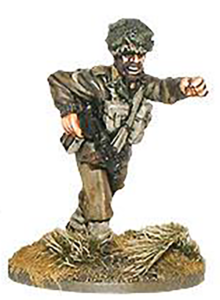 Major Howard owed everything he achieved to extraordinary work ethic and conscientiousness. He started his military career as a private in the King’s Shropshire Light Infantry. From the outbreak of war in 1939, he rose rapidly through the ranks. By April 1940 he was a Regimental Sergeant Major. He was soon offered a chance at an officer’s commission which he reluctantly accepted and obtained. He transferred to the Oxfordshire and Buckinghamshire Light Infantry and was posted to the 2nd Battalion. In 1941 he was promoted to Captain and by the end of the year, the Ox and Bucks were converted to glider-borne troops.

In May 1942, Howard was again promoted to Major and given command of D Company. Howard imbued in his soldiers the same qualities that had made him a successful soldier. D Company gained a reputation under Howard’s command of being the most physically fit, with the highest standards and the highest morale. It was no surprise that D Company would be selected to spearhead one of the most vital operations of D-Day; the taking of Pegasus Bridge.

The coup de main glider assault on Pegasus Bridge was one of the most precise and successful glider operations of the war. The bridge itself was taken in less than ten minutes with few casualties. For his part in leading the operation, Howard received the Distinguished Service Cross. He remained in the front line until September 1944 when the 6th Airborne Division was pulled out of the line.

You can find rules for more iconic characters in our brand new campaign book; D-Day: Overlord. You’ll also find a wealth of background information, along with new units and theatre selectors!

Tom spends most of his time buying books and painting miniatures. He enjoys putting animals on the bases of his miniatures and half-finishing side projects. Some say that he lives in a tower on top of some windswept northern hill with his wife and cow-patterned cat, Spaghetti.
View Profile | View all posts by Tom Mecredy
New: 4.7cm Panzerjäger R35 (f)
Regiment Profile: The Ox and Bucks