Andy Singeton of Volleyfire Painting takes a look at two wargaming favourites, the graceful Greyhound and the prowling Puma. Both of these vehicles were designed to give reconnaissance troops a vehicle that could provide enough fire power to extricate themselves from any trouble they may encounter on their missions, whilst maintaining the speed and mobility, as well as the stealth to carry out their reconnaissance role. 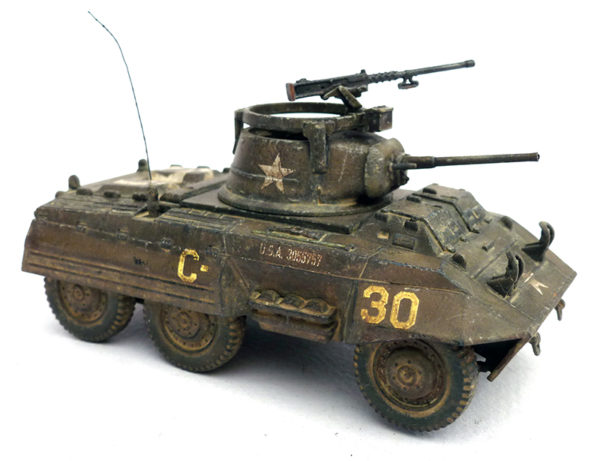 This iconic armoured car was initially developed by the United States to fulfil the role of a tank destroyer with development work starting in 1941. The 37mm gun with which it was armed was deemed to be too weak for this role by the time the M8 entered service, and the vehicle was re-tasked to serve as an armoured car with cavalry formations in a reconnaissance role. 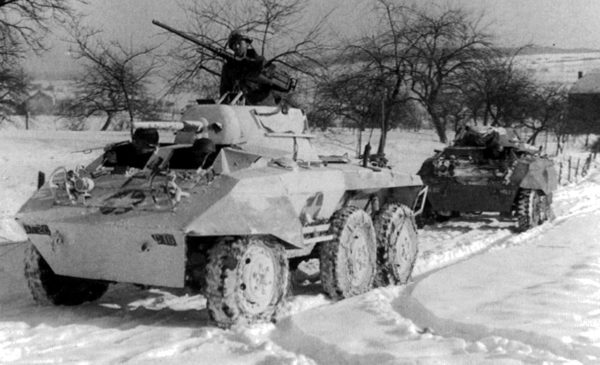 The M8 proved to be exceptionally stealthy, and whilst moving at low speed is almost silent, even when moving cross country. The vehicle has a very respectable turn of speed as well, topping out at 55mph. In combat the M8 was vulnerable to mines, as its under armour was exceptionally thin, and even at the thickest point the armour was proof only against shrapnel and small arms fire. Famously, at the Battle of St Vith in December 1944, an M8 reportedly managed to destroy a Tiger tank by firing 3 rounds at close range into the German machine’s rear armour, setting it aflame. 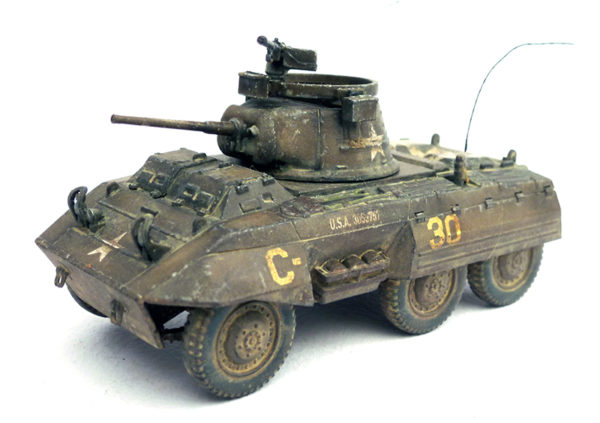 Production of the M8 ended in 1945, with around 8500 units built, however the end of the Second World War did not see the end of the M8’s service, with this fine armoured car continuing to see service in the Korean War, the Indochina war, the Vietnam war, in Algeria, the Congo and across Latin America, with vehicles being in service until the present day.

Variants of the M8 even served post-war with various police forces in the United States, and the vehicle has had a long association with Hollywood appearing in its intended role, and also as a substitute German vehicle when budgets prevented use of something actually German. A Converted M8 can also be seen in the Christmas classic Die Hard! 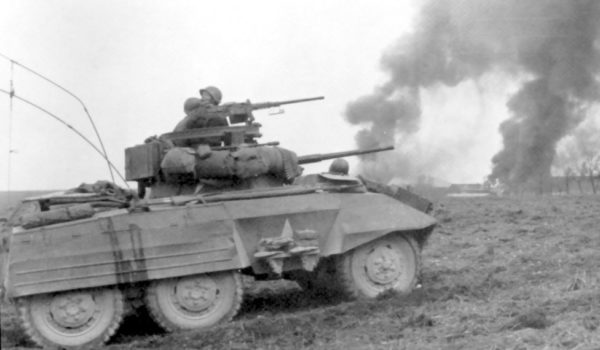 The M8 In Bolt Action 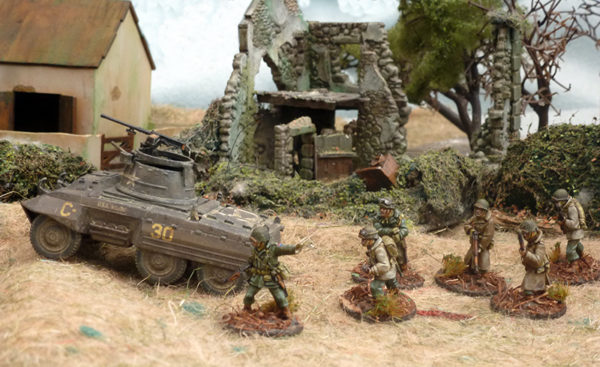 The Greyhound is a very, very flexible vehicle for American players. Weighing in at 110 Points for a regular vehicle armed with a Light Anti-Tank gun and a coax mounted MMG, the M8 can be upgraded for a further 25 points with an HMG. This allows you to fire the weapons on 2 potential targets and apply pins to them, or focus the fire and either shred infantry or take out light armour, threaten medium armour, or terrify the owners of heavy tanks, as we all know that the lesser the threat, the greater the likely hood of that lucky roll coming up and your prized King Tiger going home on turn 1… 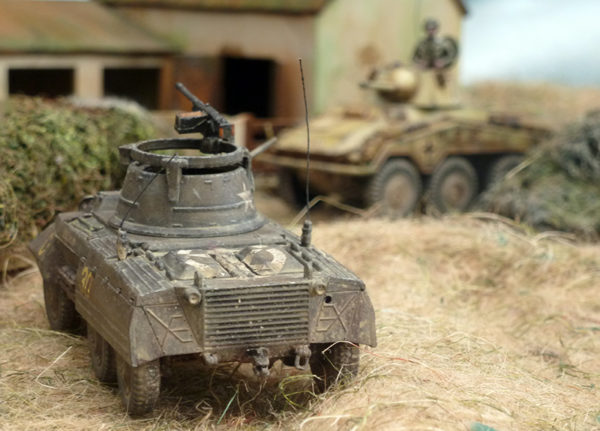 The Greyhound is only armour 7, and is open topped to boot. As such, it needs to avoid as much return fire as possible, so plan your moves so that it has somewhere to recce to whenever it is likely to be the target of the opposition. It’s worth remembering too that the US forces get their improved outflanking abilities, so an M8 sneaking up in outflank can certainly give you a nice surprise for your opponent, and also enables it to get into position without being the subject of opposing fire.

I personally have put together a recce troop of 3 of these flexible vehicles backed up by an M18 for a Tank Wars force. I’ve not had a chance to get these to the table yet but I suspect they will be reliant on a lot of smoke and mirrors, but also a very entertaining force to play. 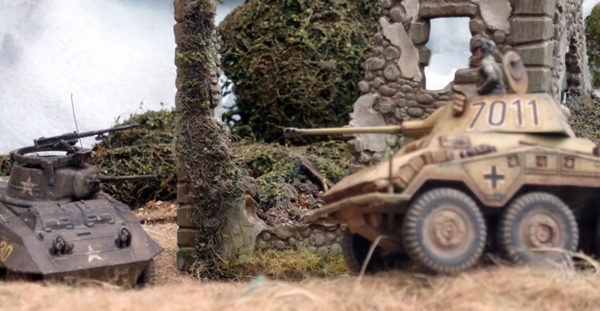 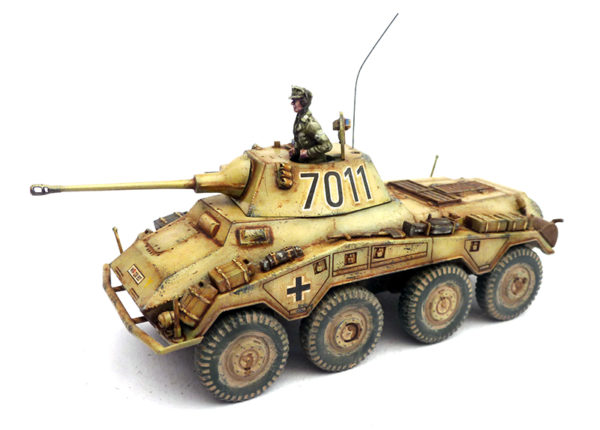 The Puma was arguably the ultimate evolution of the German heavy armoured car design family that began with the 6 wheeled 232, and evolved ultimately into the 234/4 tank destroyer.

Design of the Puma was quite protracted, with design initially starting in late 1940 and the vehicle being designed to operate in the western desert campaigns. However technical difficulties around engine reliability ultimately meant that the Puma did not enter service until after the African campaign was concluded, and was instead issued to the divisions that were currently being equipped in France, notably the 2nd Panzer Division, and Panzer Lehr, with 1st and 12th SS Panzer Divisions also receiving the Puma prior to the D-Day landings. 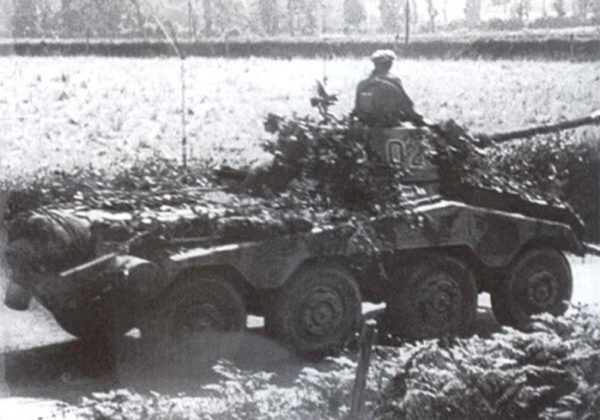 Despite production starting in late 1943, the Puma’s first combat encounters occurred in Normandy, and the vehicle continued to serve in small numbers on both the Eastern and Western Fronts until the wars end.

The Puma was well armed with the same long 50mm gun as used on the Panzer III, and for an armoured car was also well armoured, and capable of being driven almost silently. Crews were encouraged to use stealth as opposed to firepower to complete their missions, as the gathering of intelligence was deemed more useful than inflicting a few casualties on an enemy. 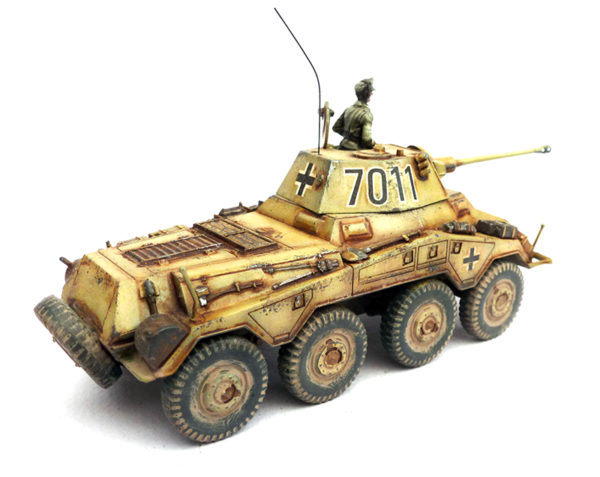 Puma’s were also utilised in flanking and screening roles, and served in this protective role during the Normandy campaign, a role it proved effective in.

Only around 100 Puma’s were built between late 1943 and September 1944, and they served with a handful of divisions before being phased out in favour of the simpler 234/1. Interestingly, the 234/1 was actually more lightly armed, equipped with only a 20mm cannon and a coaxial machine gun, as it was cheaper to produce, and also would not give the crews a sense of over-confidence that the enclosed turret and tank gun was thought to give them… 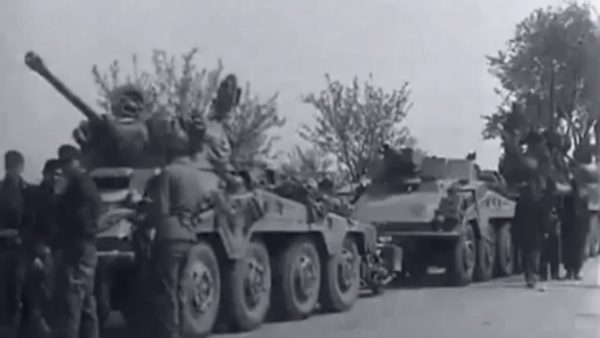 No Puma’s survive today, however 3 of the other variants still exist, 2 of the /4 tank destroyers in Germany and America, with a /3 infantry support vehicle at Bovington Tank Museum in the UK. 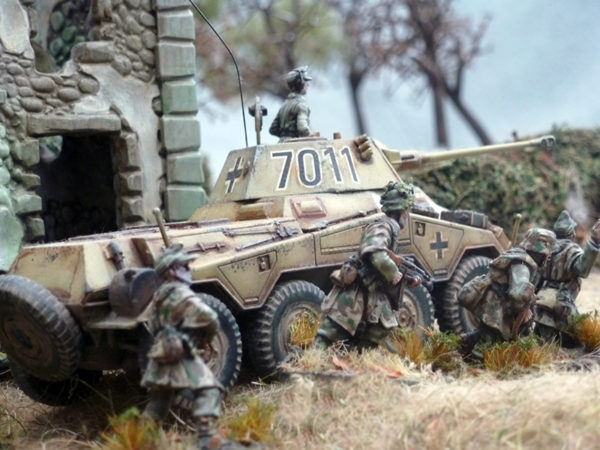 The Puma is one of the most popular vehicles amongst German players, and it’s easy to see why.

Rocking up at 160 points for a regular level unit, you get an armour 8+ armoured car, packing a medium anti-tank gun, a coax MMG, recce and married to this, Duel Directional steering, as well as taking up an armoured car slot.

Armour 8+ gives the Puma far greater survivability than most other vehicles of its class, and the extra bonus of not suffering from the open topped rule means that you are relatively safe from most infantry weapons apart from Bazookas and PIATs. Dedicated anti-tank weapons will still take you out without too much difficulty, however, the Puma has a trump up its sleeve for this, in the form of recce. 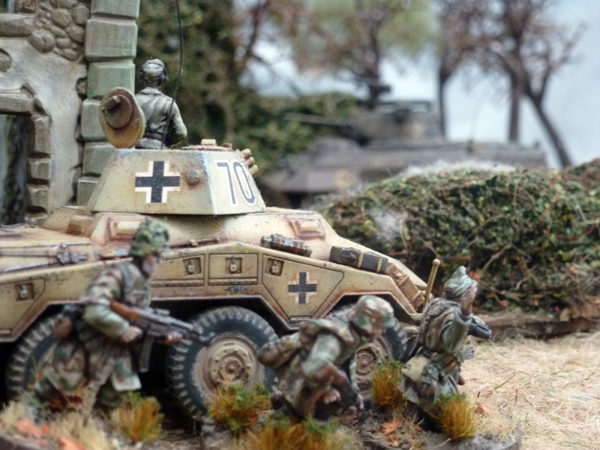 Whilst most vehicles can only recce at a half speed move, having duel directional steering means that the recce move sends you away at full speed, and allows you to make the optimal use of cover, and also allows you to get into position to get some close range anti-tank shots, with an escape route thrown in if things don’t go to plan. 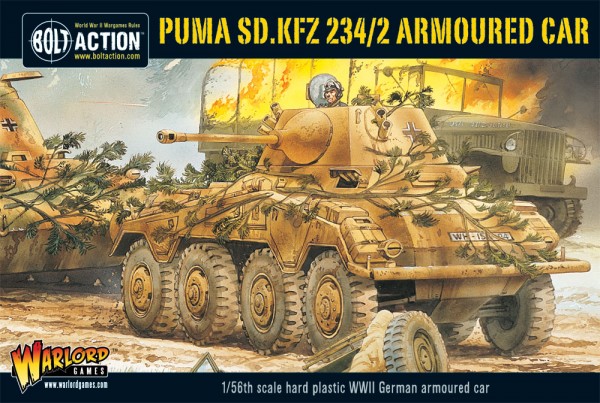 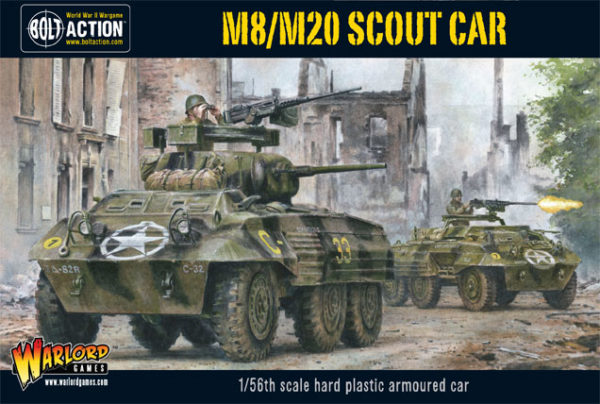 To sum up, either of these vehicles are very points efficient vehicles to add to your army, that you can use to threaten flanks, suppress infantry and weapon teams, and even hunt enemy armour with careful positioning, without eating too many of your points or preventing you from taking any other of the juicy options available. 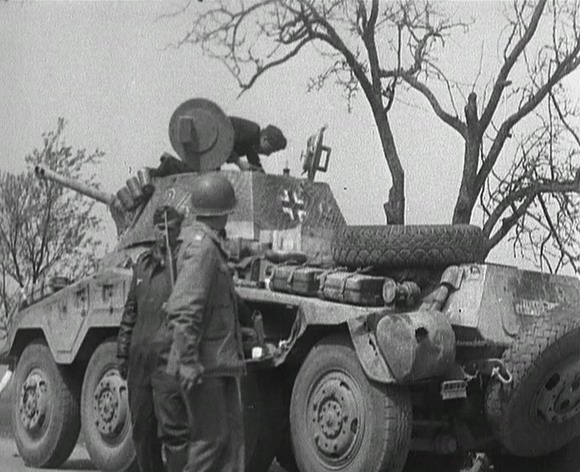 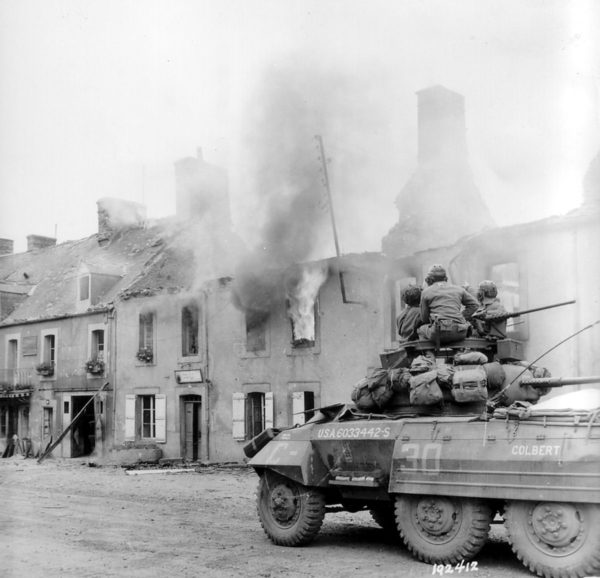