With the recent release of our Polsten AA gun, we turned once more to LVT-obsessed Rich Dando – and steered him away from his usual (Pacific) Theatre of choice – back to the NWE campaign, locked him away with a pair of clippers and some superglue, and hoped for the best…

Rich – If there’s one thing I love, it’s a good amtrac…

You may have seen some of my previous LVT conversions, and a bit of backstory that I wrote in this article – my USMC army contains more than a dozen LVTs at this point – I’ve converted all manner of variants – some mass-produced, others field conversions…

However – with the release of our Polsten gun, another option became available – albeit on different shores than the Pacific – where the LVT is perhaps most known and recognised throughout the war.

You see – the LVT wasn’t only used by the Marines as they hopped from island-to-island in the Pacific – it was also used in North-West Europe (NWE) by the Americans, Brits & Canadians… and they too used a few more specialised variants to meet their needs as they carved their way through the low countries.

With large areas of North-West Europe below sea level, the inhabitants used a complex system of water management to re-claim large areas of farmland from the water. The retreating German forces tried to slow the allied advance by opening sluice gates, blocking overflow ditches etc – and flooded huge areas.

As Allied Engineers worked tirelessly to locate and maintain dry routes through the European countryside, other Allied forces instead decided to plough-on, straight through the water – using my beloved LVT – Hurrah! 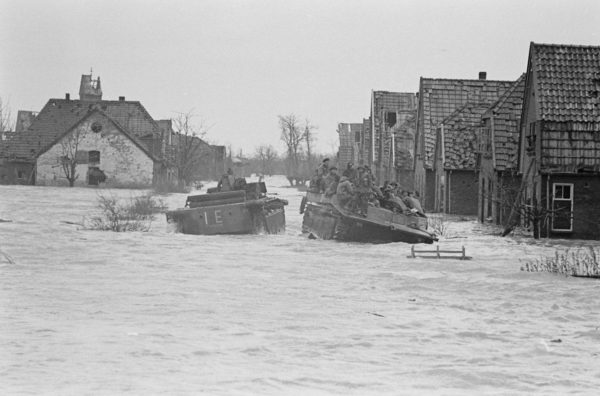 A pair of Buffalos negotiate the flooded streets of Leuth

The NWE theatre presented different challenges to the Pacific – so the Allies had different needs. With a little research, I found that the LVT1, LVT2 and LVT4 were all used in Europe…

– The LVT1 and LVT2 (stripped of weapons) were used at Utah and Omaha Beach by the US to ferry troops and supplies to shore.

– The LVT4 was used by the US when crossing the Rhine and Po Rivers – with two different weapon loadouts;

The LVT4 was also used by the British at the isle of Walcheren in the Netherlands – where it was kitted-out with a 20mm Polsten Gun, and pair of .303 Vickers MMGs to the rear.

The LVT4 was also used by the Canadians near Terneuzen, Netherlands – however I can’t confirm the weapons loadout used.

Two interesting variants saw service in NWE – the first being the LVT4 armed with Polsten Cannon. The ‘standard’ LVT4 shed its’ pair of 50cals at the front of the cargo area – replacing them with the 20mm Polsten Cannon (for more info on the Polsten, click here!)

The Amtrac was then given a pair of 30cal Machine Guns – which were mounted on the sides of the cargo area – and (in some cases) they were given ‘Box Shields’ – much larger gunshields for added protection.

From what I’ve found with a little research, the design of the Box Shields seems to have varied quite a lot… so my conversion varies from many photographs, and (as with all my conversions) there’s an element of artistic license having been used… 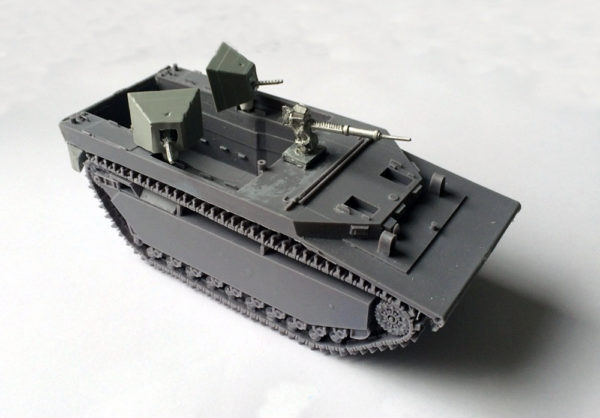 “Why yes, those are Dragons Teeth mounted on the back”

As usual with my conversions, I was quick to raid the bin of metal miscast components down in the Mail Order room for suitable bits… 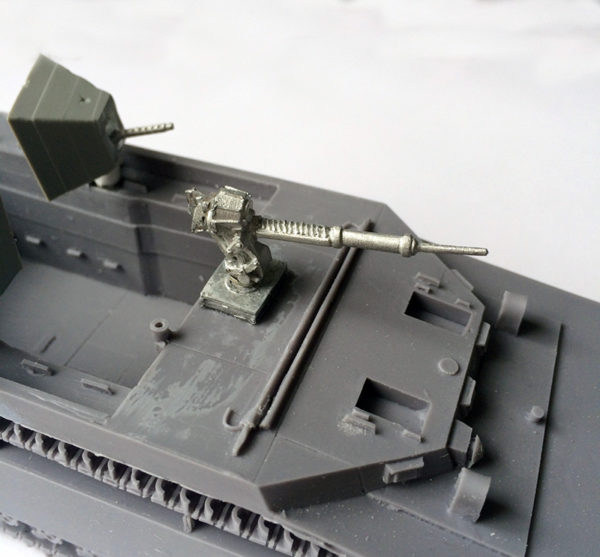 I grabbed a Polsten Gun, and part of the chassis from some form of Artillery Piece (which I cut down to a flat rectangular shape, to form a baseplate) – I affixed a magnet to the base of the Polsten Gun, and hid the other magnet underneath the metal baseplate – so the gun can pivot in position, and can be removed for storage and transportation purposes. 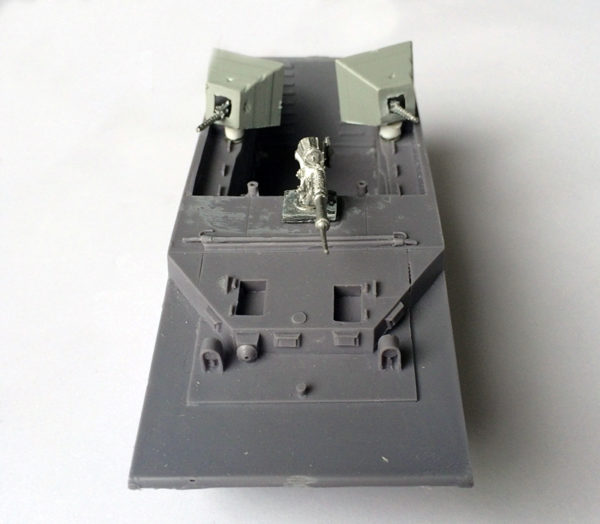 Now for the slightly trickier part… the 30cals with Box Shields.

My brain works in weird and (sometimes, but rarely) wonderful ways… and when flicking through images of LVTs, it occured to me that (bear with me here…) the trapezoid/pyramidal shape of many of the Box Shields roughly resembled a ‘Dragons Tooth’ tank trap laid on its side…

So – I absolutely butchered one of our plastic Dragons Teeth Anti-tank Obstacles – I ground-off the point – and then ground-off one side of the pyramid to create a flat (bottom) edge for the gunshields. Handily, the plastic Dragons Teeth are hollow – so when you grind them down, a hole appears in the middle – practically the perfect size to poke a 30cal through – Huzzah! 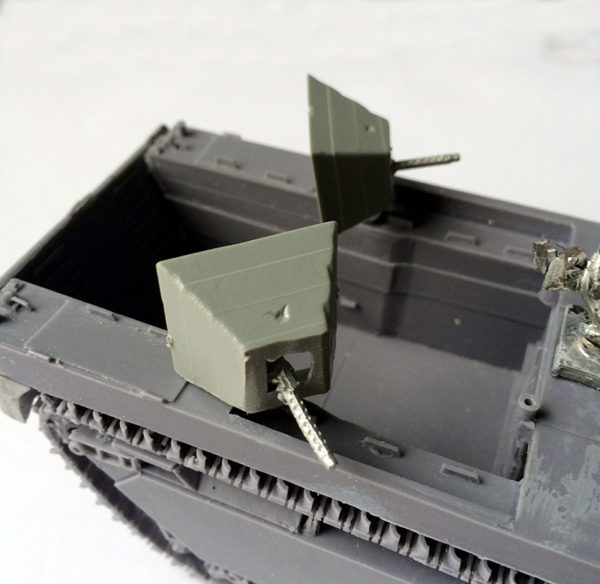 I sweet-talked Daz from Mail Order into letting me have a few spare 30cal barrels… inserted them and glued them into place… then glued a magnet to the bottom of the assembly.

I then glued a magnet to the rear of the indentations to the side of the LVT’s cargo area… and stacked a short length of plasticard pipe on top – to form a gun mount…. the Box Shield assembly would then ‘stick’ onto this via the magic of magnets – allowing the MGs to pivot in position and again – be removable for storage and transportation’s sake 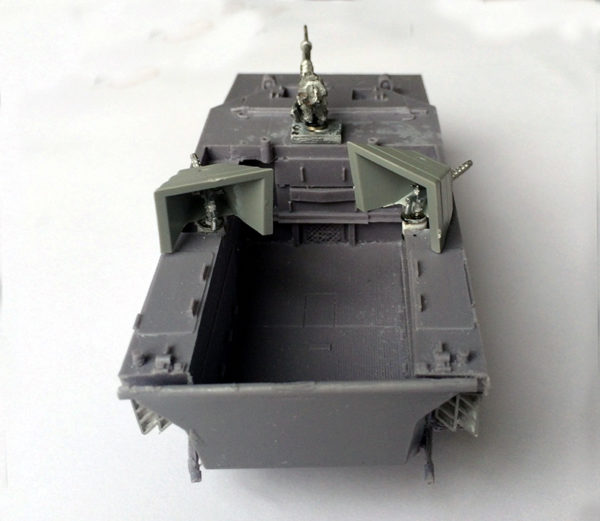 The Polsten is an upgrade for the LVT4 in the ‘Armies of Great Britain’ book, on page 62;

Now – I should state that this is very-much a work-in-progress at this stage… they still need cleaning-up, I still have to fileoff the texture on the Dragons Teeth… I need to add all of the hatches and some extra detailing – as well as probably add gun crew… but for now, it’s a cracking little project!

Now… earlier, I mentioned that there were TWO LVT variants from NWE that I was interested in… the other is a much more vicious beast – known as the ‘Sea Serpent’…

There are very few photographs of this beasty – I’ve only found one or two – however, the very notion of it captured my imagination. Armed with not one but TWO flame throwers, it won’t exactly win me any friends on the Bolt Action battlefield, but – it’s another conversion challenge! 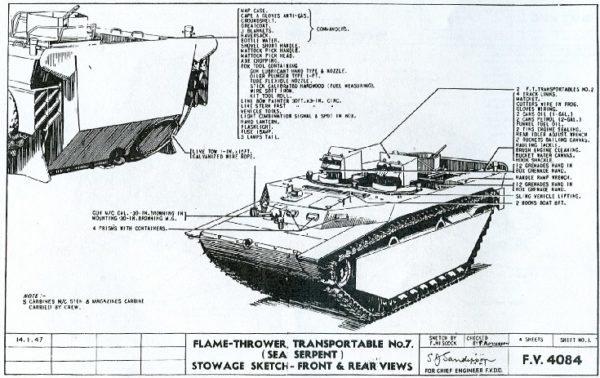 The ‘Sea Serpent’ should be a relatively similar conversion… again butchering a plastic Dragons Tooth to form the main gunshields, and then I’ll see if I can sweet-talk one of the other guys into finding a spare sprue from the 251/16 to provide the flame thrower barrels… perhaps it’ll appear in an up-coming Newsletter… 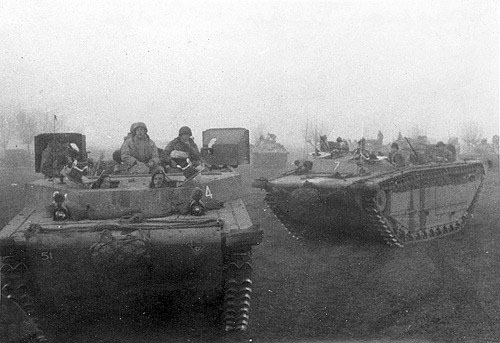 Other photos show the Polsten-armed LVT with smaller gunshields for the MGs – or even without gunshields! 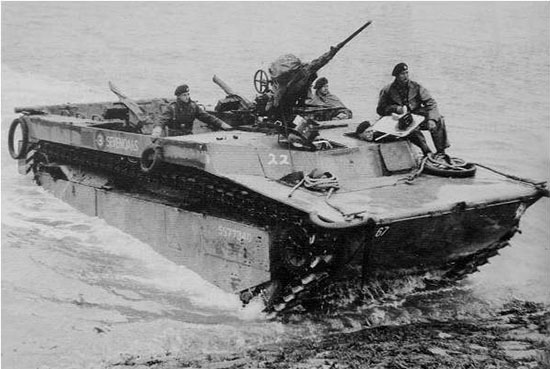 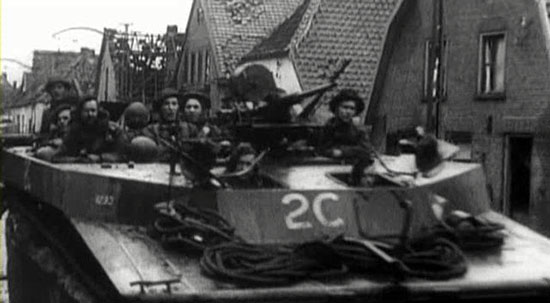 79th Armoured Division moving Canadians through a town in Holland. The 79th had a full Brigade of 3 regiments of LVT-4 Water Buffaloes. 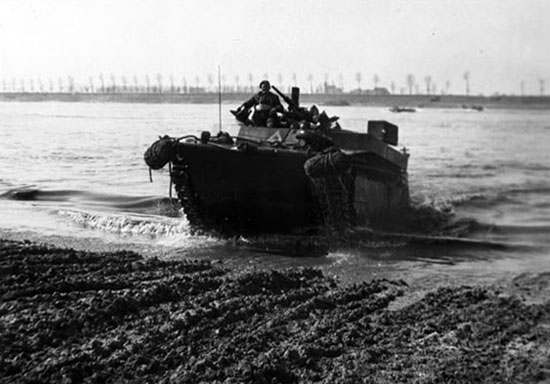 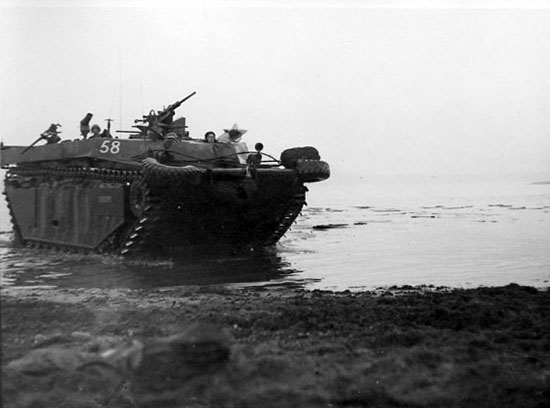 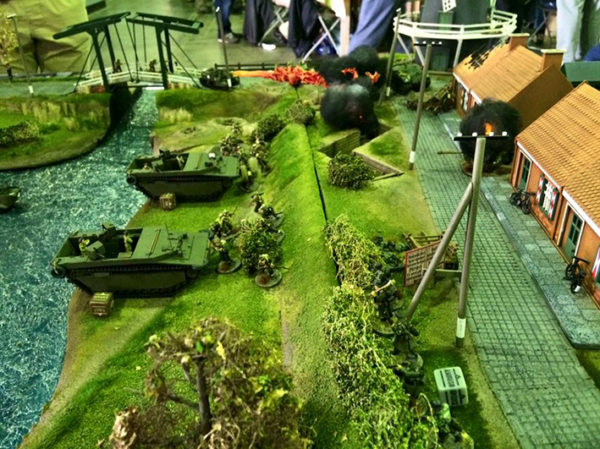 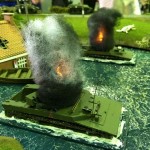 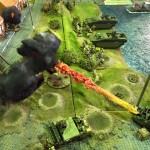 For more LVT-based nonsense from myself, take a look at my previous article which showcases some of the variants used in the Pacific, and some of my other conversions!

So what are you waiting for?! – Head on over to the Warlord webstore and grab a Buffalo (or maybe a dozen?!) today! 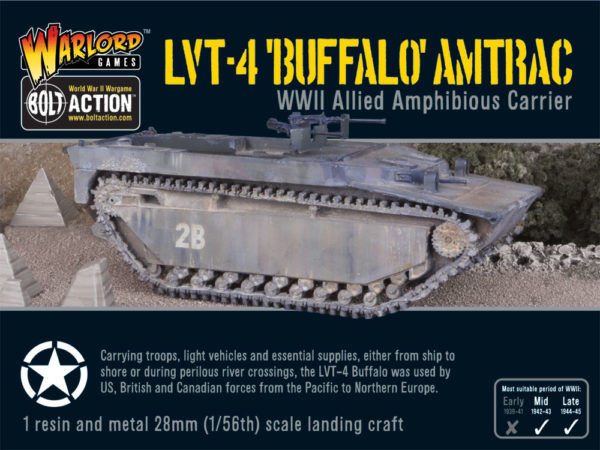 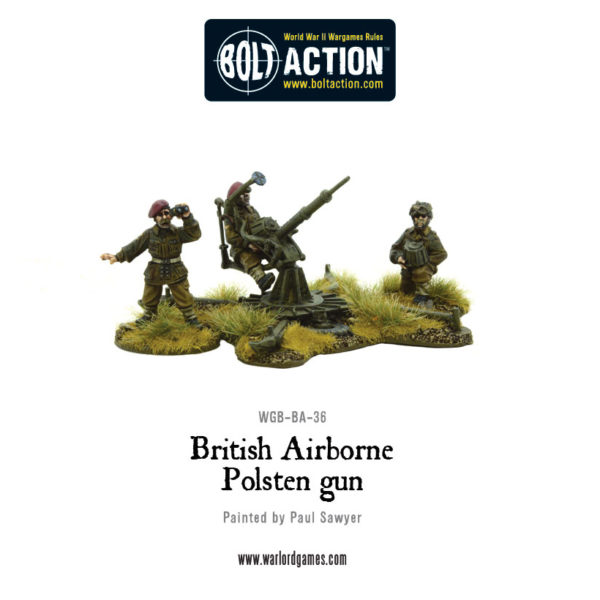 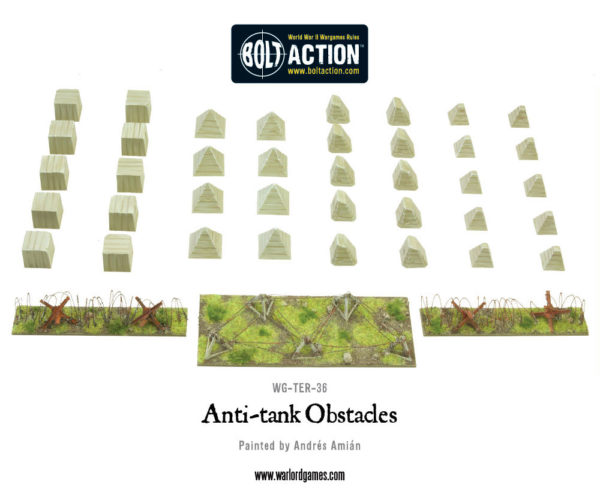