Our monolithic D-Day campaign has come to an end. Warlorder Tom looks back at the course of the campaign, and the heroic victory achieved by the allies! 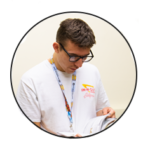 Our D-Day campaign has spanned three months from start to finish, covering the battle for Normandy from the initial landings on June 6th, through the brutal battles in Bocage country, the sieges of Cherbourg and Caen, the fighting in the Falaise pocket and the liberation of Paris!

It’s been a real back and forth struggle for dominance, with over 800 battles fought on land, at sea and in the air. Each battle has been scored and totalled up, contributing to the final victory!

This was the calm before the storm – where we took a look at all the underhand skullduggery that prepared the Allies for action in occupied Europe. Specially modified fighter aircraft scudded across the coast, snapping pictures of beach defences and in-land fortifications, while groups of commandos prowled up and down beaches, taking samples of soil along with unfortunate prisoners, all in the aid of ensuring the landing grounds were fit for purpose.

We also introduced the Firefight! experimental rules for Bolt Action, allowing for fast-paced and frenetic skirmish action across the Normandy battlefields! 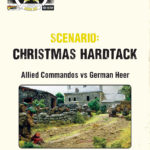 Set against the inky backdrop of Christmas Eve, a group of British commandos launched a daring raid on the Dutch coast, with the aim of capturing an unfortunate sentry to be spirited back to England and interrogated. Armed with whisper-quiet DeLisle carbines and silenced Sten guns, these commandos are prepared for any eventuality!

Beginning on June 5th, Phase 2 covered the landings of Allied troops up and down the Normandy coast. We focussed on the action in the air and at sea with brand new scenarios covering coastal bombardment operations involving the monolithic Roberts-class Monitor!

We also began a series of linked scenarios following a band of plucky US Army rangers up bloody Omaha beach and deep behind enemy lines. 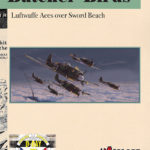 On June 6th, the Luftwaffe was nowhere to be seen – their aircraft smashed on the ground by marauding Typhoons, or intercepted far from the invasion area by swarms of Mustangs and Spitfires. The exception to the rule was a daring raid by 100-kill Ace Pips Priller and his wingman, who strafed Allied forces on Sword Beach in their Focke-Wulf 190As.

The Butcher Birds scenario marked the introduction of experimental ground attack rules for Blood Red Skies, allowing you to engage the winding columns of tanks and trucks making their way off the Normandy beaches!

We continued to follow the sluggish progress of the Allied armies around Caen and across the Cotentin peninsular, while also dipping backwards to cover the action on June 6th in greater detail. We watched as an ad-hoc German armoured formation attacked the American beachhead with obsolete French tanks, while a desperate attack by Me-410s attempted to stall the Allied attack on Villers-Bocage. 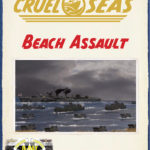 Cruel Seas provides the perfect opportunity to explore the landing operations that took place on June 6th. To support the landings, several classes of landing craft armed with rockets and cannons were produced, mixed into the formations of troop carriers, providing on the spot fire support for the landings.

The push inland ground onward, devouring vast quantities of men and materiel. Allied progress remained slow after the Axis victory in the last phase. Our focus shifted over to the British and Canadian forces desperately fighting to capture the city of Caen. The tide finally turned when several companies of the Canadian Black Watch forded the Orne river and drove deep into the city. 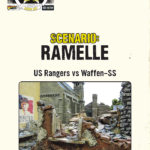 As the penultimate scenario in our multi-part Firefight! campaign, Ramelle had to be something special. A depleted squad of rangers and paratroopers play cat-and-mouse with a Tiger tank, desperately attempting to stop it from over-running their makeshift position and taking the last standing bridge over the Merderet river!

Following the successful capture of Caen, we returned to the American sector to explore their troubled advance across Bocage country. The claustrophobic hedgerows made excellent defensive positions, allowing the Germans to ambush and harass the American advance with impunity. The invention of hedgerow cutters helped the Allies break the deadlock and drive on towards Paris. We also took a look at Captain Miller’s heroic last stand at the Alamo! 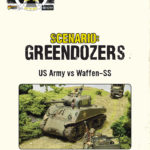 Put the patented Culin hedgerow cutters to good use and join the US Army as they barge their way through the Bocage, smashing a hole in the Waffen-SS defences. Using special rules to restrict Allied movement through the hedgerows, the scenario forces players to plan ahead, staying several steps ahead of their opponent!

As our campaign drew to a close, we chose to pick out and follow three distinct narratives from the closing stages of the Normandy campaign. The first was a partisan uprising on the Vercors massif in the southern alps culminating in a glider-borne assault by German fallschirmjagers. We were bottled up in the Falaise Pocket with members of an SS panzer regiment and followed a group of landsers through Paris in the last days before the liberation. 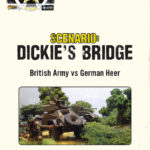 In the run-up to Operation Tractable and the fighting around the Falaise Pocket, we stopped to look at a chance encounter that enabled the Allies to break the deadlock and outflank the enemy. Caught behind enemy lines with half his squadron of armoured cars, Lieutenant Dickie Powell discovers an unguarded bridge!

History often repeats itself, even at the much smaller scale seen on our gaming tables. It’s been a phenomenal few months and we’d like to personally thank everyone who’s submitted games, joined the discussion on our forums or sent pictures to our Facebook page.

The Battle for Normandy Continues!

Just because we’ve wrapped up the campaign doesn’t mean you have to stop wargaming this iconic period of the Second World War. Grab a copy of the D-Day: Overlord book and any of the miniatures featured below and join the fight!

Tom spends most of his time buying books and painting miniatures. He enjoys putting animals on the bases of his miniatures and half-finishing side projects. Some say that he lives in a tower on top of some windswept northern hill with his wife and cow-patterned cat, Spaghetti.
View Profile | View all posts by Tom Mecredy
Warlord Games Careers – Store Manager
SPQR Talent Focus: The Horselord