Bolt Action writer Alessio relates his experience at the two-day tournament held this summer at the ‘Derby World Wargames 2013’ show, and explains how it has led to a change in our tournament rules pack. 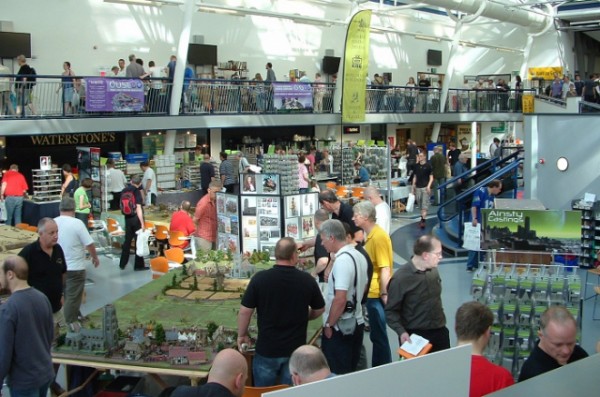 For a few months now I’ve been trying to implement a grand plan to get back into ‘wargaming for fun’, as opposed to the ‘wargaming to playtest stuff I’m currently working on’ routine of the last few years. So, when I was invited to play in the Bolt Action tournament at the Derby World Wargames show, I seized the chance and hurried to put together the US Army force I’d had in mind for a few months. I got together the models, had them painted (I like playing, not painting…) and then found time to do some ‘sparring’.

The force I assembled initially was a single-platoon force of mostly regular GIs. I always favour balanced armies over very specialised ones, as I’m convinced that if a tournament has reasonably scenarios, a balanced force should prove more adaptable and do better overall. In other words, if some scenarios favour mobility over static firepower, a slow and ‘shooty’ army should do badly there, while a light and ‘zippy’ force might instead struggle in a scenario that is a slow battle of attrition. A balanced force, with both static and mobile elements, and under proper command, should be able to do well in both scenarios. The key issue of course was going to be the ‘proper command’… Anyway, the force was initially made of a second lieutenant leading two infantry squads, a few teams in support (FAO, medic, sniper, bazooka, medium mortar), a Greyhound scout car and a 76mm Sherman.

After getting hammered in pretty much all of the pre-tournament ‘training sessions’, my army naturally evolved, as I learned from experience. The most notable difference from its original inception being that I decided to sacrifice my Sherman and Greyhound, replacing them both with a single recce Stuart, tasked with doing the job of both previous vehicles, and saved me enough points to include a first lieutenant with two more infantry squads… oh, and a medium howitzer artillery piece! This change removed the best anti-tank gun available to my army, but I realised that when faced with a super-heavy, I stood a better chance of pinning it into oblivion with suppressing fire from heavy weapons combined with air strikes than actually trying to go through its armour. The other very important effect of this change is that it increased the number of dice in my army, which I was finding to be an important element in the games I played.

To my shame I have to admit surrendering to gamesmanship and taking minimum size infantry squads, which allowed me to take more BARs… I love BARs! That felt slightly dirty, as it would probably have been nicer to form the squad up at full strength, to remain closer to history. On the other hand, I thought ‘oh well, it’s a tournament’ and stuck with the small squads. As a justification, in my head I imagined that each group of two squads really were a single squad split into two fireteams… Not too far from a plausible explanation, except of course that it meant the men also had recently raided a BARs depot!

I then did a little bit of research to give a nice theme to my ‘regular GIs’ force, and what I read about the regular army units at the Battle of the Bulge made me choose the 2nd Batallion of the 112th Infantry Regimental Combat Team (The ‘Sixteenth Pennsylvania’). I have to admit that the choice was influenced by the regimental motto and badge, which I thought were very inspiring – see below! The only unit that needed to be from a different formation was the Stuart, and I thought it both reasonable and cool that it might have belonged to the 9th Armored ‘Phantom’ Division, which was operating nearby at the time. Here’s the final force list I took to the tournament: 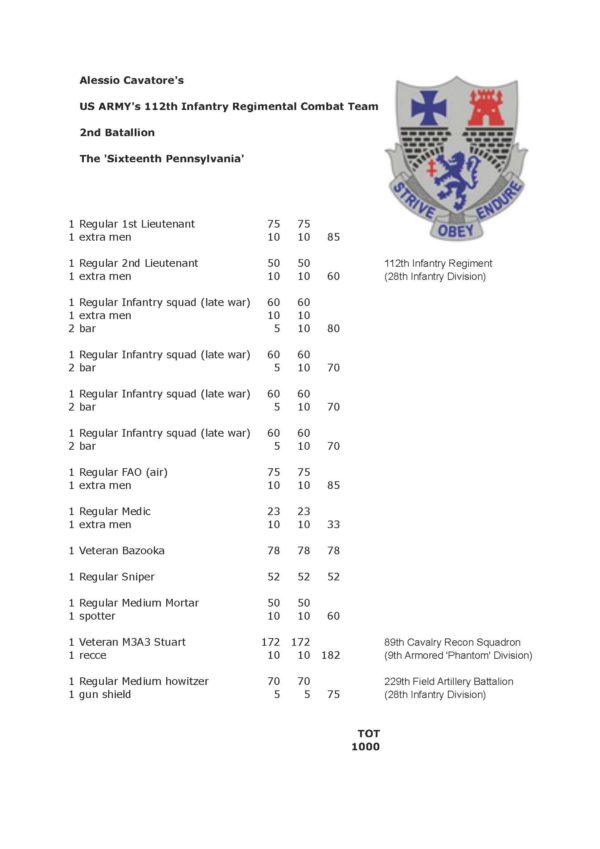 GAME ON! – The tournament

The first day of the tournament was immediately interesting, as we found out that the boxes containing the buildings had not arrived due to a packing error, so the density of terrain on the tables was less than the organisers intended. We had to make do with hills, woods, hedges and drystone walls, and the occasional rocky outcrop. It was slightly reminiscent of fantasy wargaming, a little too rural for WWII, but on the other hand, of course, many battles were fought on relatively open terrain (the deserts of North Africa, the steppe of the Eastern front…), so not a problem. Some players complained about the exceedingly free lines of sight, but I have to say that I found the three games we played on the Saturday very entertaining, as I am used to denser terrain, and so it felt different to have to cope with a more open battlefield. The ‘issue’ was solved on the Sunday anyway, when the buildings were delivered and placed on the tables. Bizzarely, after the more open fields of fire of the Saturday, the more narrow and closed tables on the Sunday felt almost claustrophobic… and at times I missed the open spaces of the Saturday. At the end of the day, I liked the fact that we played without buildings on the Saturday and then with them on the Sunday, it made for two very different gaming
experiences!

And speaking of game experience, I truly enjoyed playing Bolt Action ‘in anger’ for the first time. Sure, there were a few niggly bits in the rules that, as a designer, you feel (are!) responsible for, and invariably distract you from the game in progress, but overall the game flowed really smoothly and was very good fun. For the first time in my life I played six tournament games and did not meet at least one player that I regretted having to play against. All of my opponents were nice (some more than others, of course!) and I enjoyed all of the games, including the ones I lost. Actually, on the Saturday, I won two games and scored a draw on the third one – a performance that left me really surprised, as normally I’m really bad at playing games I designed.

The Sunday however proved the end of my ‘winning dreams’, starting with two sound defeats. I managed to save the honour of my army in the last game with a victory, ending in a respectable ‘upper mid-chart’ position. The only critique I can express is that in many cases the games felt a bit short for time. Direct battlefield experience confirmed what I had learnt in preparation for the tournament – that Bolt Action is more about keeping your enemies pinned with firepower while manoeuvring around to achieve victory than killing them outright. That means that having a lot of units is a powerful tactic, as it both allows you more shots (you just need to score a hit on the enemy to pin it) and more dice. So players, much like me, tried to have as many dice as possible in their armies. That is fine, and is balanced as all armies can do the same, but one factor that we had not considered is that in Bolt Action, the length of the game is very directly related to the number of dice in the players’ armies. Thus, for armies with a relatively high number of dice, squashing a game inside of two hours proved challenging in some scenarios – particularly when I had to play against an eighteen dice force with my thirteen dice force… for a whopping total of thirty-one dice!!!

As we shared the feedback from the games with the other Warlord Games guys, I started to think about what I could do to address this issue. Someone suggested limiting tournament games to a single Platoon per player, but I think that would drive towards making all armies a bit too similar, taking away a great deal of variability from the force selection process. Instead, I thought of capping the number of dice based on the amount of points used. For a ‘normal’ 1000 points game, it would feel nice to use roughly ten dice, and as the dice are sold in packs of 12, it seemed to make sense to associate the ‘core’ game of 1000 pts to a single pack of dice – so twelve dice maximum.

I wanted to create a relationship between the size of the game being played and the maximum amount of dice available for people to build their armies. So I thought that the rule could be: in tournaments, the maximum number of dice equals the maximum points value allowed in the tournament divided by 100, plus two, rounding any results down to the nearest whole number.

This should help keeping the pace of the game up, making turns shorter and hopefully allow players to finish most games. I will modify the tournament pack with this experimental dice limit and would like the community to try the system out a bit and let us know how are they finding it. Then we’ll decide whether the dice limit is here to stay or not.