Get ready to have your mind messed with! Things get personal with Kansyr…

Kansyr first appeared in the Strontium Dog strip when Johnny Alpha and Wulf Sternhammer went searching for him on Metastis; a refuge for the worst scum of the Galaxy. 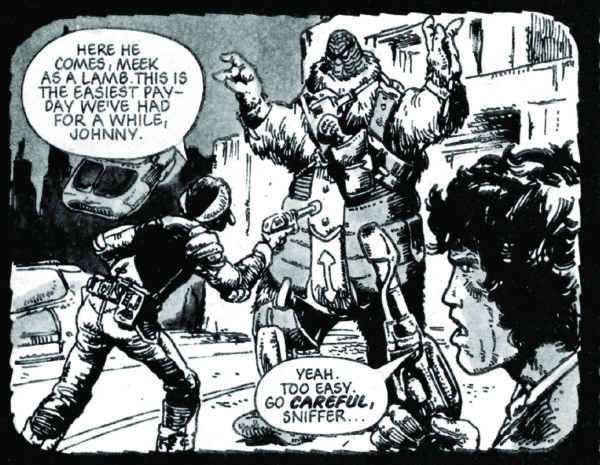 Johnny and Wulf arrived at a dive bar in an effort to gain information about Kansyr’s whereabouts. During this, Johnny tells Wulf that they have an old score to settle: Kansyr was the one who killed an old Search/Destroy partner of his, Sniffer Martinez. This was on Kansyr’s home planet, Laz, when he was just starting out as a young criminal. Kansyr had stolen a mind-weapon and while cornered by Sniffer and Alpha, used it to create a fake Kansyr who appeared to surrender. This lured Sniffer out of cover where he was then brutally gunned down by the real Kansyr. 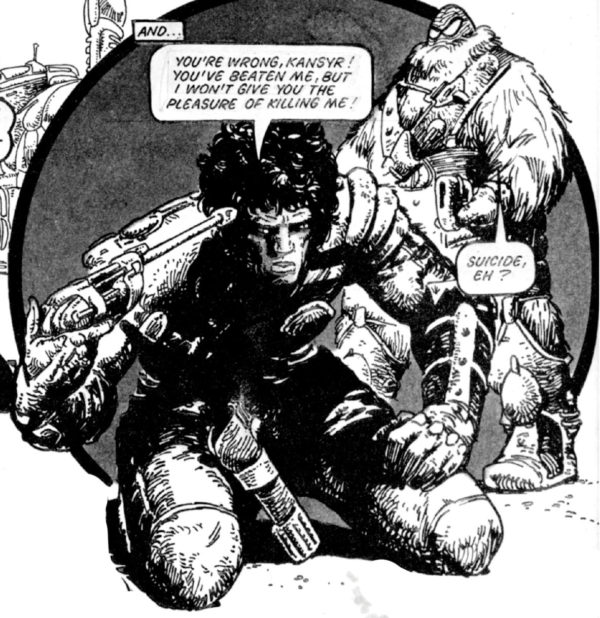 At the time, the Laz authorities did not recognise killing muties as a crime and so let Kansyr go with a fine, and thus he went on to become of the most wanted criminals in the galaxy.

Whilst Johnny is telling his story, Kansyr uses the mind manipulation device to make Alpha and Wulf appear as monsters to one another. After almost killing each other, they soon realise they are being manipulated.

Johnny and Wulf confront Kansyr in a final showdown, with Alpha managing to trick Kansyr at the last minute by seeming to shoot himself in the head. However, he had actually programmed the beam from his gun to pass harmlessly through his skull and kill Kansyr instead.