This week, we’re looking at one of the unique scenarios featured in the Bronze Age supplement for Hail Caesar!

This is a skirmish battle between chariot warriors, focusing on the chariots themselves. Homer, author of the Iliad, regarded the Trojan War as marking the end of the Bronze Age. It also ended the ‘heroic age’ of chariot warfare.

Hittite records that refer to Wilusia, Taruisha and Ahhiyawa, that is Ilium, Troy and the Achaeans reveal that these events probably occurred towards the end of the Hittite Empire. The Iliad is full of heroic duels between rival charioteering heroes. It was the custom that opposing chariot warriors would challenge each other to personal combat before the clash of armies or during a lull in the fighting.

“Now you have in your army the finest men in all Achaea. Is one of these prepared to fight me? If so, let him step forward…” – Hector addresses the assembled Achaen host.

The aristocratic chariot warriors of the Bronze Age can perhaps be compared to the much later knights and indeed, the Bronze Age Greek word for chariot lord was Eqeta, ancestral to the Latin word Equites for a mounted soldier. In the Near East, the word was Maryannu, meaning ‘Young Hero’ and is related to the Sanskrit word Maher. The Canaanite word Ne’Arim has a similar meaning.

These warriors, who fought mainly with composite bows, javelins and sometimes a thrusting spear and wore the best armour and rode lightweight chariots drawn by usually barded horses, can also perhaps be compared to the flying aces of the First World War. Both had flimsy war machines and cultivated the heroic ideal of combat, although the aces were far more gentlemanly than chariot warriors. 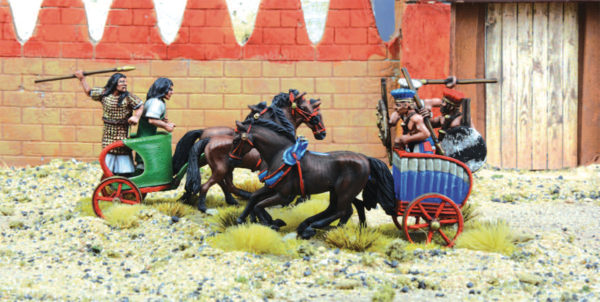 The odds against survival and chances of a short career ending in heroic death were great for both and both passed into legend. It is often asked, ‘How did anyone fight in a chariot?’ Well, they did, and devised many and varied tactics and decided the fate of kingdoms in this way. So the answer is, however you can fight in a chariot is what they did. Who were the bravest warriors of antiquity? Was it the chariot warriors because ‘they fought with the equipment that they had!’? Experimental archaeology may answer more detailed questions and various chariots have been reconstructed, often with surprising results.

The fighting around Troy has reached a prolonged stalemate creating the opportunity for chariot warriors on each side to come out into the plain before the city to challenge each other. Champions from both sides fight in duels aimed not only at winning renown, but boosting the morale of their own side and knocking out enemy leaders and commanders. The Achaeans have no shortage of heroes, although they are getting fewer as the war drags on. The same applies to the Trojans, but they are reinforced by heroes from elsewhere in Anatolia, drawn to Troy as allies and the chance to win fame in battle.

In this skirmish-style battle, each player either plays a single heroic chariot warrior or a small team of chariot warriors. Each model is treated as a tiny unit in itself with enhanced values rather as a champion would be in a ‘fantasy’ game. Each player can also choose something from a list of special abilities, weaponry or armour.

You can find more information about this scenario on page 133 of the Age of Bronze book!

Getting Started with the Age of Bronze

This starter bundle is fantastic for all you budding Chariot aces out there, giving you the book and two beautiful chariots from our late Bronze Age range. 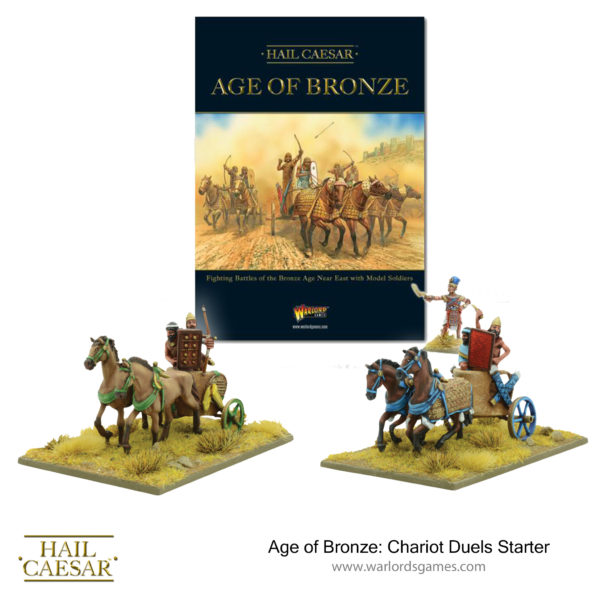 Tom spends most of his time buying books and painting miniatures. He enjoys putting animals on the bases of his miniatures and half-finishing side projects. Some say that he lives in a tower on top of some windswept northern hill with his wife and cow-patterned cat, Spaghetti.
View Profile | View all posts by Tom Mecredy
Pre-order Dark and Bloody Ground, Black Powder supplement this Friday
One Box Armies: Operation Overlord