Using our fantastic range of miniatures, you can create a spectacular and unique Bolt Action force to re-fight the desert campaigns of the 8th Army…

The Bolt Action British Commonwealth plastic infantry is based on the 8th army plastic sprues. The key difference is in the inclusion of optional heads to represent Australian, South African, New Zealander and LRDG/SAS troops. Using this versatile kit as the basis of your 8th Army Bolt Action force allows you to be very particular about the flavour of Army you want to create. 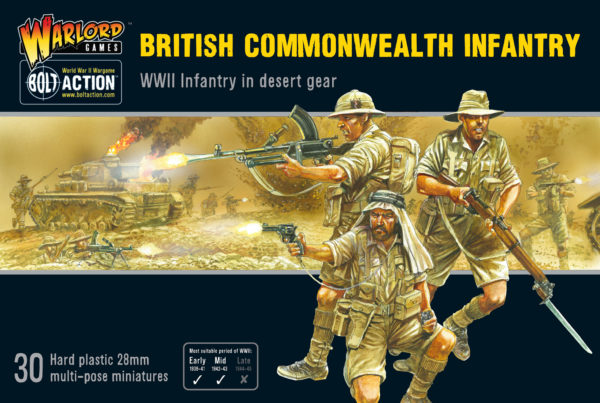 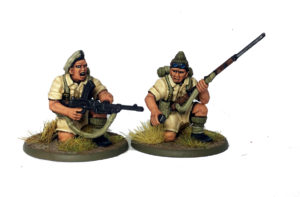 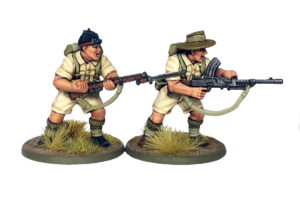 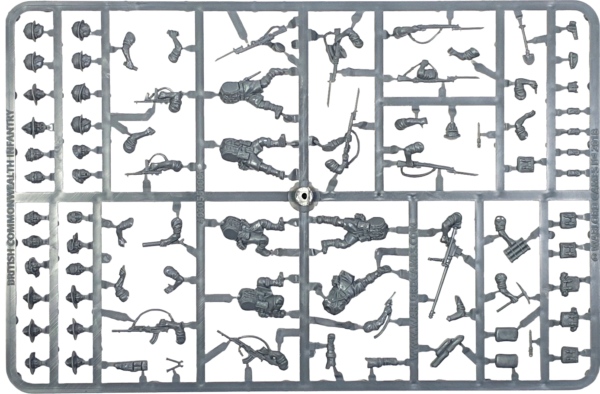 The sprue is absolutely packed with options!

This set is ideal to mix with our plastic 8th Army set, which contains optional Indian (Sikh, Punjabi and Yusufzai) and Scottish Highlander heads, allowing you to create a truly multi-national force. 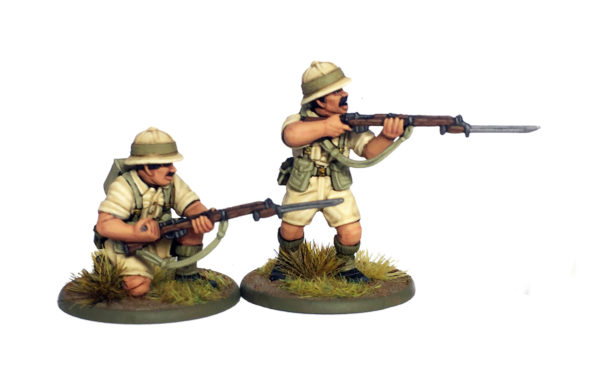 This boxed set gives you all you need to start playing with the forces of the British Commonwealth in the scorching, dust-filled desert of North Africa and beyond.

Providing a strong core of infantry, support teams and the ubiquitous Bren Carrier transports this set is perfect for replaying legendary battles such as El Alamein and Tobruk. Will your Desert Rats prevail against the combined fascist forces of Italy and Germany?

The box set represents tremendous value for money, with a saving of approximately £20 compared to purchasing the contents individually.

Far from simply being an aesthetic distinction for your miniatures, you also have the option of applying special rules and national characteristics to certain British Commonwealth armies, some of which have been outlined below.

The British 8th Army was a multinational formation from the very start. Starting out as the Western Desert Force, it was composed of the 4th Indian Infantry Division and the 7th Armoured Division. In 1941, it was augmented by divisions from every corner of the Empire, including Australia, New Zealand, India and South Africa.

It was the individual idiosyncrasies of these divisions that set them apart – these are represented in the national characteristics, many of which are detailed in the Campaign: Western Desert supplement. You can only use one nationality’s characteristics and special rules, so either pick or use the one that is most represented by the majority of models in your Army. 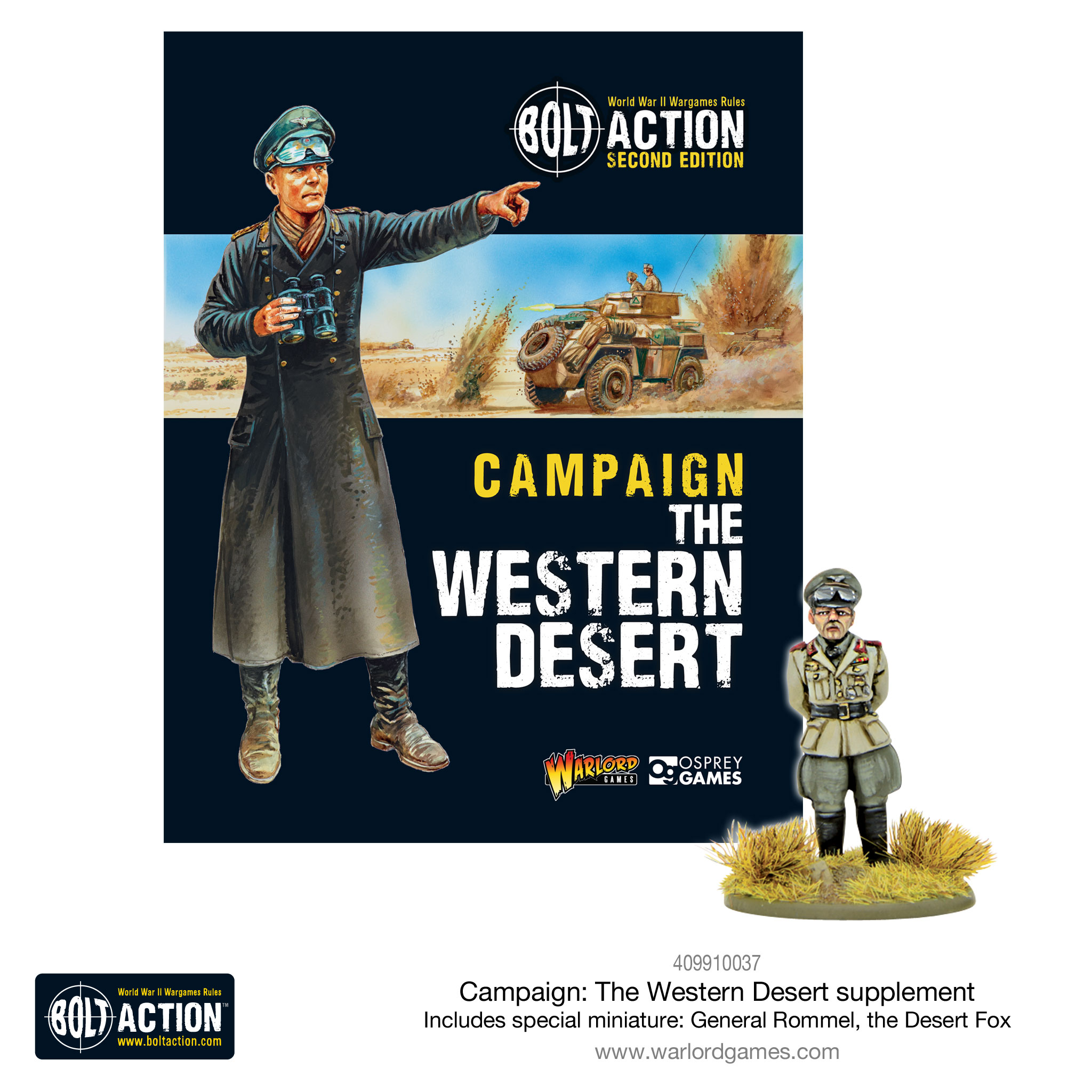 The Australian 6th, 7th and 9th Infantry Divisions were all part of the 8th Army during the North African campaign. They often found themselves caught up in the thickest fighting of the campaign – particularly at Tobruk and El Alamein.

Quickly developing a reputation for tenacity in attack and defence, the Australian contingent on the 8th Army was highly respected for its fighting spirit and ability to resist to the last man. 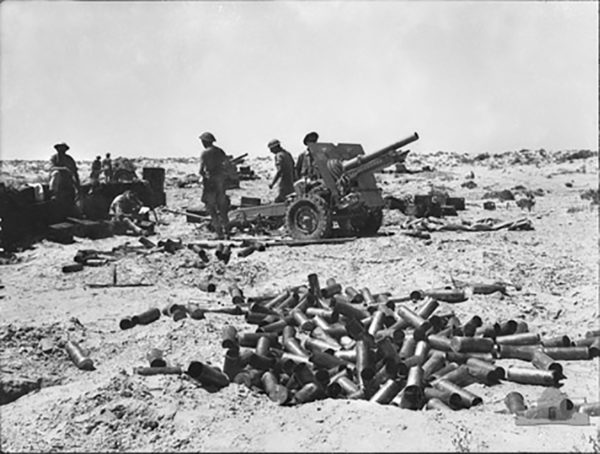 Australian field artillery in action during the battle of El Alamein.

The Australian player automatically wins the first roll-off for who places their first ‘forward deploying’ (i.e. snipers, observers, spotters) unit. In addition, no enemy that forward deploys may set up within 18” of an Australian unit already deployed. Also, Australian infantry spot hidden enemies at a range of 18” rather than 12”.

When defending in an assault scenario, Australian infantry and artillery units count as having the Fanatic special rule.

Consider your force composition and playstyle when choosing one of these traits. Aggressive Patrolling allows you to keep enemy infiltrators away from your lines and any key objectives on the table, giving you that edge in the early stages of the battle.

Never Give Up makes your infantry extremely resilient in close quarters and very difficult to dislodge as they won’t have to make morale checks for being reduced to half strength. Players looking for the tenacious fighting spirit that turned back Rommel at Tobruk should choose this trait.

The LRDG prepare an ambush

Despite suffering appalling losses in the face of the enemy and a strained relationship with the upper echelons of the 8th Army, the two South African infantry divisions acquitted themselves well in the face of stout enemy resistance. 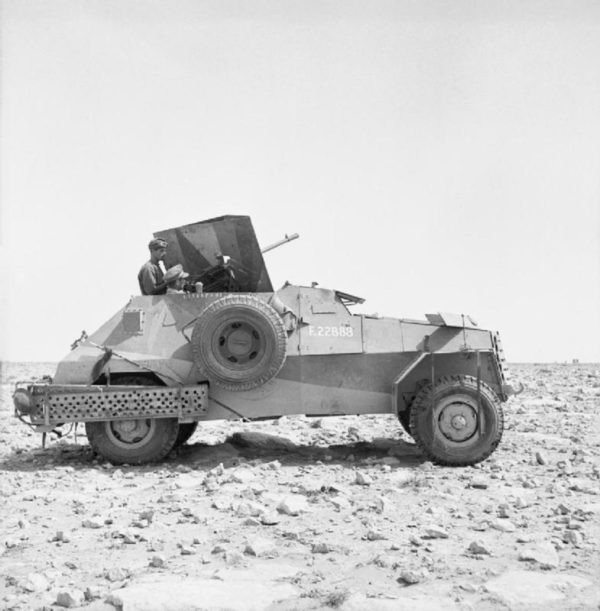 A Marmon-Herrington MkII armoured car of the 1st South African Infantry Division as used in the Western Desert.

Often broken up into brigade-sized units and utilized alongside other Commonwealth units, the South Africans proved to be ferocious fighters, despite being hung out to dry at Sidi Rezegh and at El Alamein.

Whenever a South African infantry or artillery unit receives hits from non-HE fire, place a pin marker as normal. If, however, no casualties are subsequently caused the pin is automatically removed.

A South African infantry or artillery unit is always allowed to react to being assaulted. The surprise charge rule on page 76 of the Bolt Action rulebook does not apply.

Bloody Mindedness is particularly useful for keeping your units in the fight as long as possible. In the attack, they’ll be able to soak up incoming fire without getting bogged down and remain combat effective for longer while at the sharp end.

If you’re expecting a lot of close assault, Quick Reaction gives you plenty of opportunity to thin out the opposition before they close the distance.

New Zealand’s contribution to the Western Desert campaign was two-fold. The majority of the Long Range Desert Group was drawn from the 2nd New Zealand Division. These men were selected for their toughness and self-reliance, expected to carry out missions deep behind enemy lines, with little hope of support from other units. 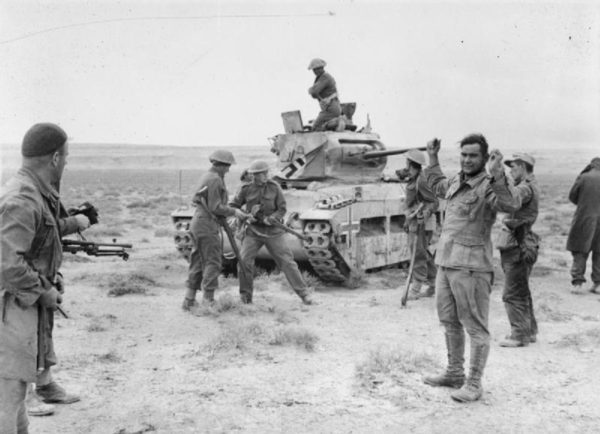 New Zealanders of the 2nd Infantry Division recapture a Matilda tank, taking the German crew prisoner in the process.

When the bulk of the 2nd Division arrived in North Africa in 1941, it found itself thrust into the fighting around Tobruk and Sidi Rezegh. Like their South African counterparts, a lack of anti-tank weapons or armoured support would cause the division to take massive casualties.

A New Zealand force may add Maori units to its choice of troops. Any Infantry or HQ unit may be selected and for the cost of +1pts per man, the unit gains the formidable fighter trait.

The main perk of taking New Zealand’s national characteristics is the ability to add Maori units to your army. For the small cost of only 1 point per model, you can drastically increase the effectiveness of your infantry and HQ units.

These Maori units are incredibly versatile in attack and defence, especially when supported by HQ units taking advantage of the Superb Junior Officer characteristic.

The Indian contribution to the North African campaign began with the 4th Indian Infantry Division’s inclusion in the Western Desert Force. From the very beginning of the campaign in 1940, Indian infantrymen were charging into battle against the Italians and Germans.

Churchill commended the “unsurpassed bravery of Indian soldiers and officers” during the course of the war, something they demonstrated time and time again during the various battles of the desert war. 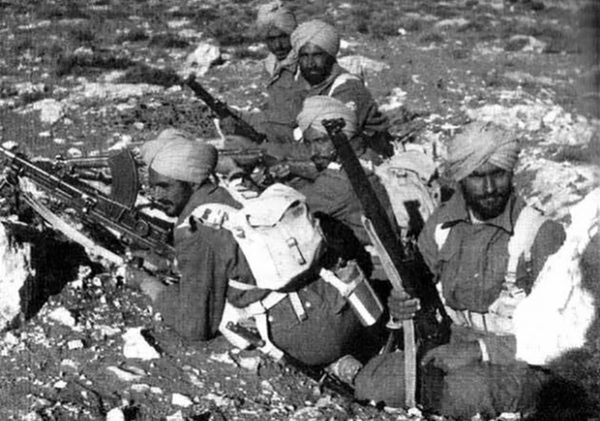 Sikh soldiers of the Indian Army during Operation Crusader.

Churchill paid tribute to “the unsurpassed bravery of Indian soldiers and officers.” To reflect this, whenever a unit of infantry or artillery fails a morale check and would otherwise be destroyed as a consequence, take the test again, and apply the second result.

THE MANPOWER OF THE EMPIRE

To represent the vast manpower available from the Indian subcontinent, the Indian force gets a free ten-man Regular infantry section (Early War), armed with rifles. Any additional equipment for this section may be purchased as normal.

An Indian army taking advantage of Unsurpassed Bravery becomes more resilient under sustained fire. Being able to take the test again gives you an opportunity to keep your units in the fight and play more aggressively. This is perfect for small squads mounted in Universal Carriers as they’re more likely to be taking morale tests.

Manpower of the Empire allows you to play your Commonwealth army more like a Soviet one, with an additional rifle squad to screen an attack or contest objectives.

Armoured Reinforcements in the Western Desert

Dan can often be found contemplating the mound of unpainted minis building up under his desk. He has a tendency to roll lots of ones. He also has a tendency to complain about rolling lots of ones.
View Profile | View all posts by Dan Hewitson
Pike & Shotte: Father Tilly
Black Powder: The Battle of Bunker Hill