Having recently had the opportunity to challenge Rick Priestley to a Game of Bolt Action I packed up a German force and trekked across to Ricks Barn for a bit of a bash against his Russians & whilst there put the question to him; Why Russians? 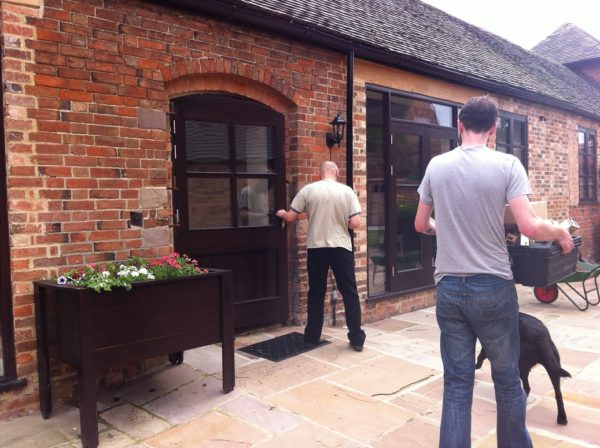 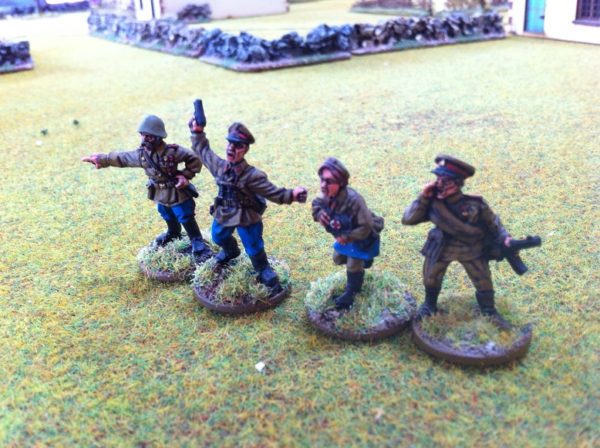 ‘Why Russians then?’ asks young Carlisle as he struggles to herd words into some kind of recognisable article about my Bolt Action army. It all sounds a bit unnecessarily philosophical to me. A bit like ‘why cats’ or ‘why clouds’ and ‘why do socks have to match anyway?’ Resisting the obvious answer of ‘why not’ I suppose there must be a reason why I went for Russians as my WWII army, and not – for example, British or Germans or Americans? 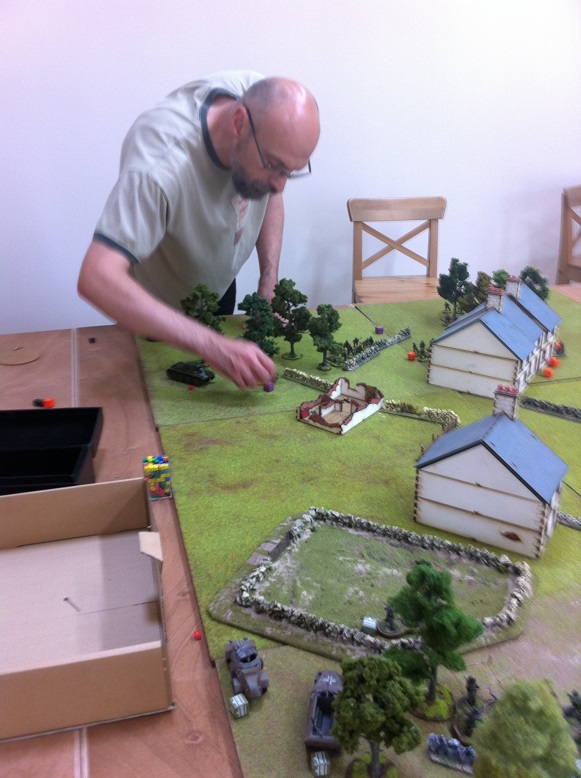 Together these make up the ‘big four’ if we are allowed to roll what would have once been called ‘Empire Troops’ into the British mix, and we should because that was very much the historical perception back in the day. So I guess it’s fair to say I wanted to put together one of these armies – not being much inspired by the war in the far east – and everyone else seemed to have bagged the other three! I was tempted by a French army – which on the tactical level that Bolt Action is played at isn’t a bad choice at all – but once again my likely opponents were all late war armies. So what is a man to do? That’s another one of those overly philosophical questions by the way. 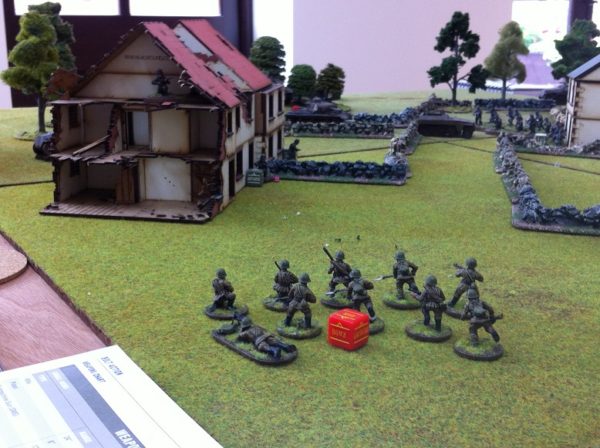 There are lots of positive reasons for choosing Russians though, and not least amongst them is that the Warlord Games plastic Russian Infantry set is one of the best that we make. Compared to some of the earlier sets it benefits from design experience; the sculpts are first class, the posing is excellent and the variety of add-on bits is impressive but also considered and practical. The weapon frame is still separate and I must admit I am a great fan of molding the weapons onto the arms as this makes the models much easier to put together. However, in this case the weapons do fit nicely and with a little conversion work it’s possible to extend the range of poses even further. The weapon frame is also a joy, with way more choice than it’s possible to make use of including: anti-tank rifles, scoped rifles for snipers, the standard and semi-automatic rifle, carbines, lovely light machine guns, and different kinds of sub-machine guns and pistols. In fact pretty much all you need bar the heavier support weaponry and vehicles. So big tick there! 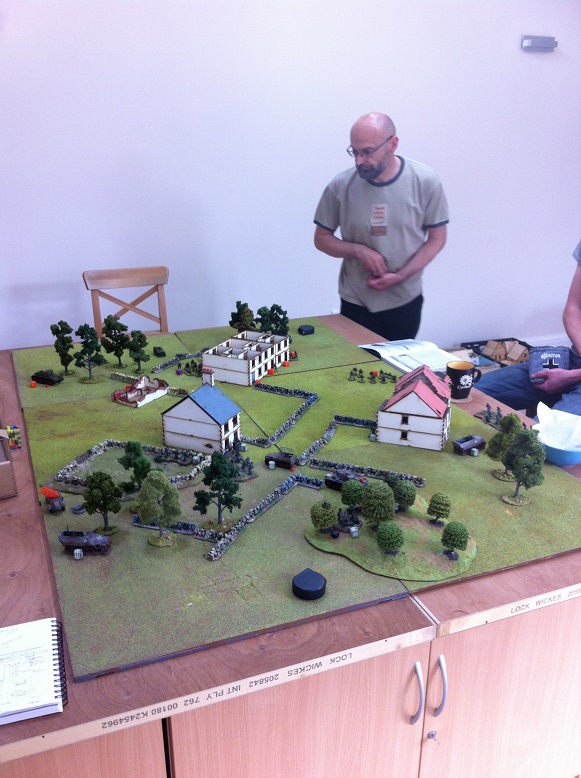 One of the other attractions of the Russian army is its ubiquity. Yes the Russian uniform did change a bit throughout the war, but the Soviets rarely retired anything until it fell to bits and continued to use whatever kit was available from the beginning to the end. This was even true of some of the antiquated tank designs – many of which continued in service once better models came along. So, with a nod to practical matters a Russian army can be put together that, with few substitutions, can convincingly serve from 1941 all the way to 45. The Warlord kit includes a mix of summer uniform and the winter style padded jackets (be careful to glue the correct arms to the appropriate bodies!) However, this is not obtrusive and I have never felt the need to consider my force in such strictly seasonal terms. Instead I have gone for a rather generalised group, which I’d consider suitable for any conflict the Red Army is likely to get involved in. Another tick for me I think! 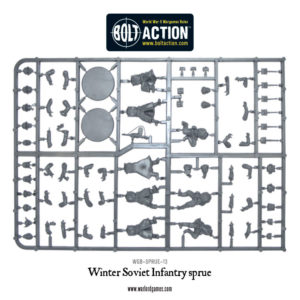 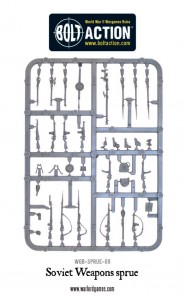 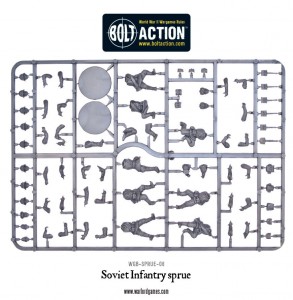 In game terms the Russians have a few special qualities that are certainly interesting. Not least amongst these is the extra ‘free’ unit that tends to give me the advantage of numbers. Although somewhat below par in terms of their fighting ability – these lads always seem to pull off some spectacular feat whilst all around them the better quality units are dropping like flies. I don’t know why this should be so and perhaps it’s just a case of ‘something for nothing’ that draws my attention; anything they achieve is a bonus! The other thing I like about the Russian infantry units is that it’s entirely possible to field squads armed with SMGs whilst other squads are all rifles – which saves a lot of squinting and mucking about during a game! None of that, ‘oh that’s four rifles and one sub-machine gun and – oh – the officers got a pistol,’ malarkey. And a good thing too. Yet another tick there then. 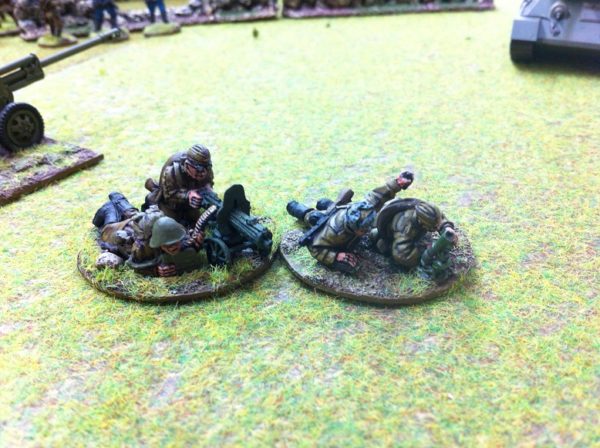 On the subject of ‘squinting and mucking about’ one of my bugbears is models armed with light machine guns that are shooting or carrying them on the move in a way that makes them look like riflemen. It’s just all too easy to miss them – and to miss them in your opponent’s army too – it just ain’t natural. Yes yes… maybe some nutters did fire them from the hip during combat, but even so I’m all in favour of practical recognition on the gaming table over histrionic arm waving any day. So, all my LMGs are mounted prone on those ‘pill’ style bases, and – even better – the Russian Degtyaryov (DP) machine gun has the distinction of being fed from a circular ‘pan’ magazine, which makes it instantly recognisable. For similarly entirely sensible (and not in the least ranty or idiosyncratic) reasons I mount all my AT rifles and snipers onto the same pill style bases. All are immediately recognisable for what they are – with the DP machine’s gun’s ‘record player’s’ looks easily marking it out from the others. So that a double tick at least! 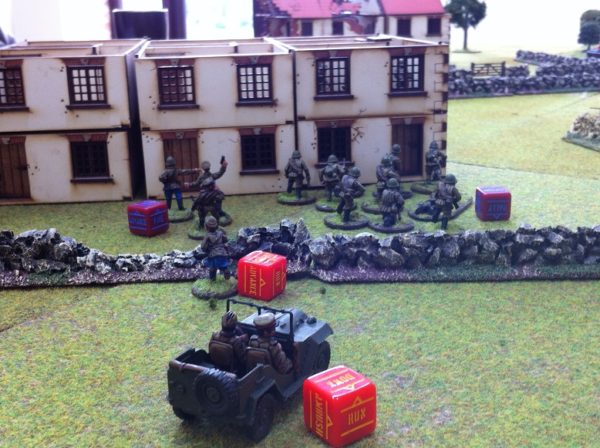 When it comes to supporting our fine boys in action there is plenty in the Bolt Action range to go at. The range is perhaps not yet quite as complete as that for the Germans, Brits or Americans – though more continues to be added I am very pleased to say. Since I made my start we’ve had plenty of new recruits, especially when it comes to filling out the armoured divisions. However, with the enticing possibility of lend-lease it is also possible to make use of British and American kit, although so far I have resisted the temptation. John Stallard very kindly gave me a Gaz jeep – so now it serves as transport for my commander – and very smart it looks too! Numerically, US made jeeps vastly outnumbered the tiny Gaz in Russian service, but as with Soviet propaganda we prefer to draw a veil over such capitalist contributions for the present! 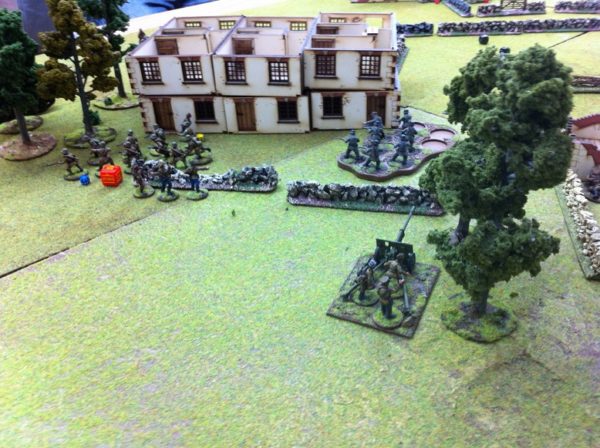 Whilst on the subject of supporting weapons I generally like to base my mortars, machine guns, artillery and such like in such a way that individual crew models can be removed as casualties. So, if you look at my Zis-3 gun you’ll see that the three crewmen are mounted on their own bases, which in turn fit onto bare patches left on the gun’s base. This means I can remove crew as casualties without having to mark figures as ‘dead really’ as you have to do if the models are all fastened down. 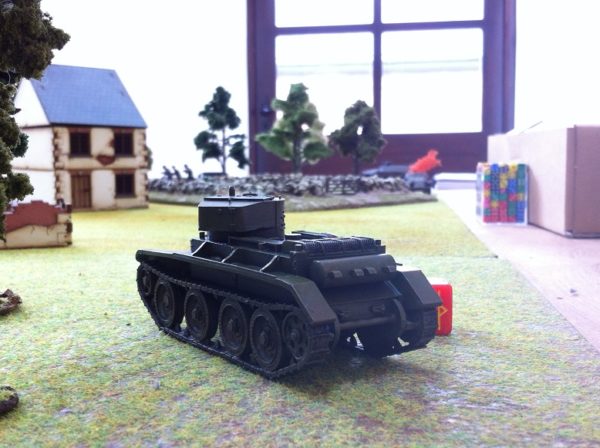 When it comes to tanks it hardly needs saying that the Soviets are as well equipped as any army from light tanks all the way up to the monster KVs and IS heavies. Whilst the star of the piece is the T34 – surely the most elegant looking tank every to grace a battlefield – my preference is for the lighter BT. Cheaper on points it still fulfils the role required of a tank in Bolt Action, at least in the kind of battles envisaged by the rule book. If tanks are our thing though the Russians will not disappoint, from the early war multi-turreted monstrosities to the late way Josef Stalin III. However, to me Bolt Action remains an infantry based game in which the big tanks are just big targets – and point’s gobblers at that! 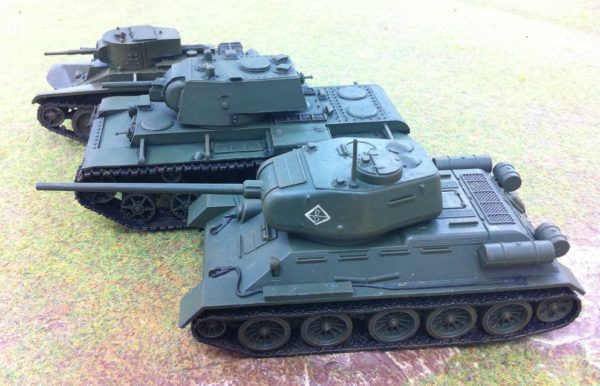 That said I do appear to have a KV ready to see off any invasion of the Motherland. What a handsome brute it is too! I never feel the need to daub my armour in slogans, recognition badges, mud or messy winter whitewash, preferring a plain factory finished kind of appearance. Russian armour rarely sported much in the way of markings, and most wartime photos reveal none discernible, which saves a lot of unnecessary faffing about with waterslide transfers as far as I’m concerned. If so inspired I prefer to hand paint the markings, as you might be able to tell from my T34. This is the plastic kit by the way (the other tanks are resin) which goes together very easily and certainly looks the part. I’m looking forward to a 76.2mm turreted version though because the lighter gun would bring the points down and is so much … well ‘neater’. So – tanks – lots of them and lots of types – and just plain green! Many many ticks! 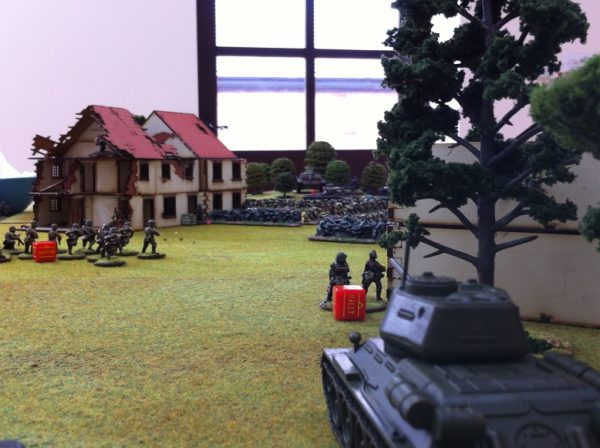 Anything else to add. Painting tips – trawl the internet for Soviet WWII reenactment gear. This is a great source for colours and descriptions of the soft kit. On the plus side (anticipate more ticks here guys) Russian uniforms and kit did tend to vary a lot in colour, allowing for a certain amount of leeway when it comes to painting. I went for the Vallejo basic British Uniform highlighted with Khaki Grey and Khaki and I think this gives a good overall impression of the Russian uniform– if perhaps leaning a little towards the darker range of colours. The green parts of the kit are actually Vallejo Russian Uniform including the helmets and knapsack (same green for AT guns, maxims, mortars etc). Russian webbing and belts are canvass and usually pale – I used the Khaki. The blanket roll is a darkish brown and I used Flat Brown – Vallejo again. Boots are black of course whilst the weapons just get painted in the usual range of colours – generally I go for plain black for metal parts and a suitable mid-brown for stocks. Tanks and bigger vehicles are the darker Russian Green with a little shading and highlighting. 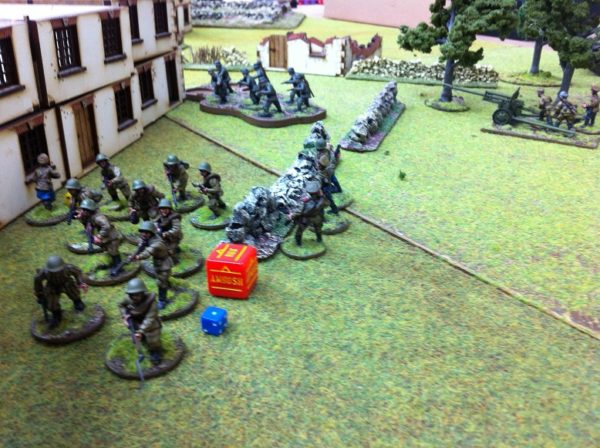 There you go – why Russians you ask? Well it makes a change from the usual protagonists of the Normandy campaign and for anyone interested in reading up about the Russian army and the Soviet role in WWII there is much to engage with that is probably less well-known than is the war in the west. In Bolt Action terms the army has at least as much variety and mutability as any other of the ‘big four’ and doesn’t fall short in any notable areas. You can play it straight or you can exploit the ‘hoard’ potential with a larger than average force. You can stick to Soviet made equipment or mix it up with everything from soft skins such as jeeps and trucks to a huge variety of tanks including Churchills, Matildas and – of course – US built Shermans. So why Russians? Why not!

Fancy a bit of Russian action yourself? Come on in & check out the complete range here: