Chris Brown chats about enemy troops attacking field artillery and how that transitions into Bolt Action. 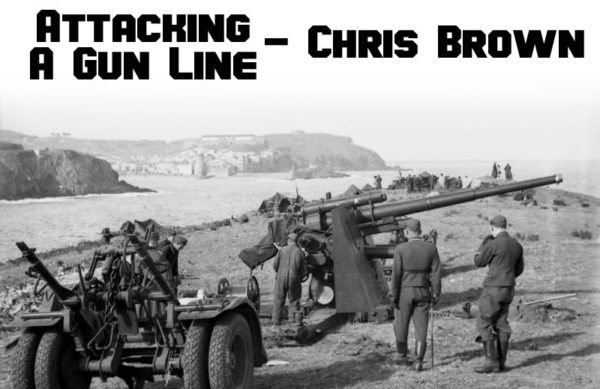 Mostly when we see war photos of artillery batteries it is obvious that the battery is a long way from the enemy. In WW2 British field artillery units of 25 pounders were sometimes called ‘the nine-mile snipers’ which tells us two things:

1)The guns were considered to be very accurate.
2)They were a long, long way from the battlefield proper. 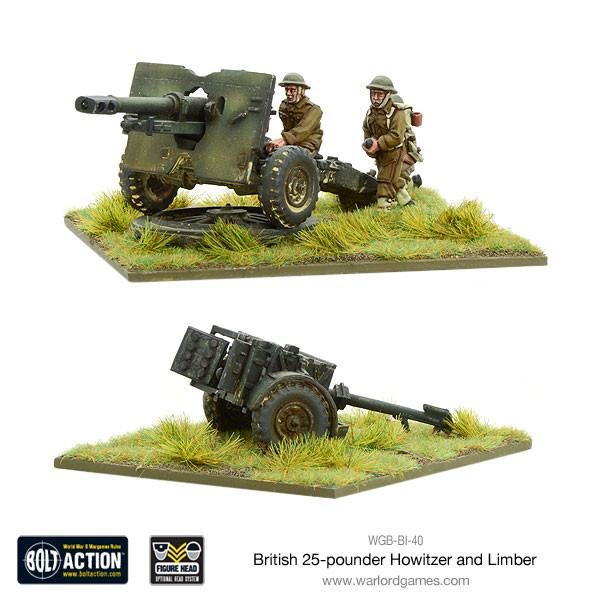 This was not always the case. One of the benefits of breaking through the enemy’s frontline was the prospect of forcing his artillery to pack up and move or perhaps even being able to destroy it.

Although the intention – in any army – was to keep the artillery well away from the enemy’s infantry and armour it was not always possible. The enemy might break through and take you by surprise or you might not have anywhere else to put it or, in the last resort, a shortage of anti-tank guns might force you to have field artillery right in the front line to take on the enemy’s armour. The latter happened quite a lot on the Eastern Front, but there are plenty of examples from North Africa. There were also situations in Burma where the rather different nature of the conflict required Commonwealth artillery and administrative units to take responsibility for their own immediate defence against enemy infiltration. 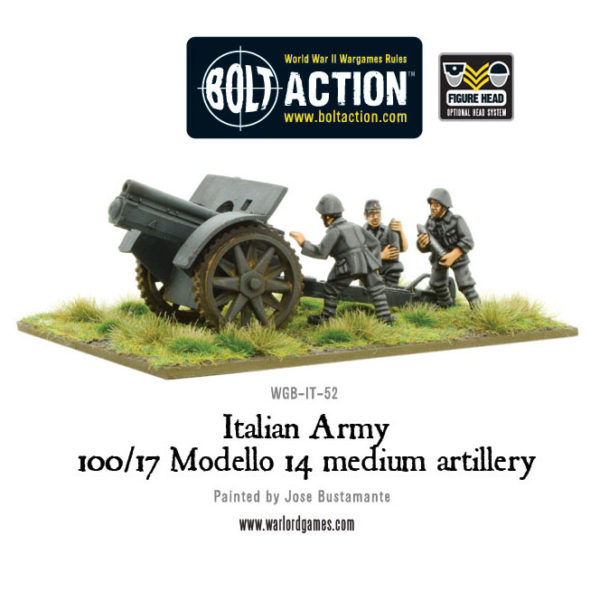 So what are the implications form a game of Bolt Action? Obviously, if one or guns are ‘up at the sharp end’ the usual Bolt Action provisions apply, but what about an attack on a field battery? How do we handle that? Most importantly, can it make a good game?

The short answer is ‘yes, it can make a good game’, but it helps to adopt a couple of minor ‘site-specific’ rules.

For a start, we should assume that the attackers are close up to the gun line and that the usual infantry/armour protection is not available – if it was, the attack would have to push them out of the way to get at the artillery anyway. And then there’s the business of shooting. In real life, field artillery is not necessarily the best firing option at very close ranges. It’s very difficult to hit a moving target at 50 yards with a field gun and if you do hit it, you may find yourself caught up in the blast of your own shell as in ‘target at 2 inches, blast template size 4 inches’…let’s not do that. 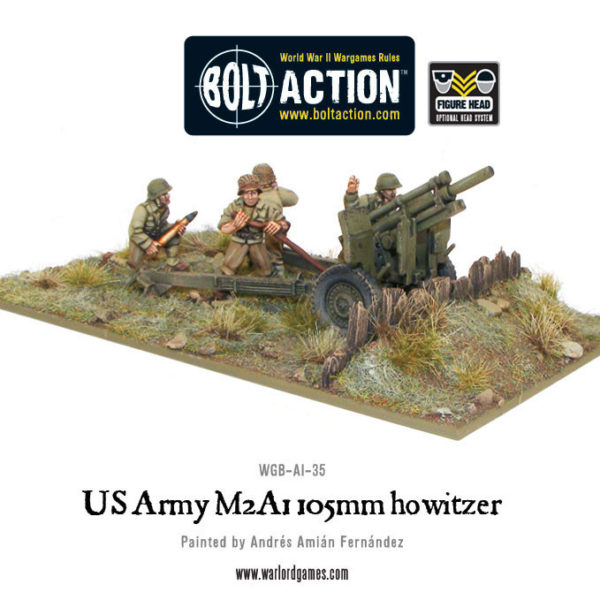 In practice gunners – like all other soldiers – have small arms and are trained to use them, though not as intensively as infantrymen obviously.

In most armies the distribution of small arms would be a little different; the gunners probably will not have bazookas, PIATs or panzerfausts, but it’s not impossible that they might have some LMGs, MMGs or even HMGs mounted on vehicles as an anti-aircraft defence. It is more likely that they would just have rifles for the rank and file and perhaps SMG for the NCOs. 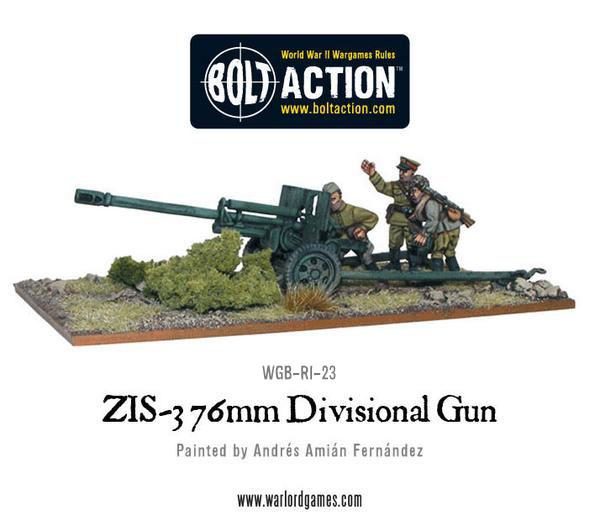 That’s not a challenge for Bolt Action – essentially we can think of the gun crew as being a very small squad since there will only be three men in the crew, however it’s more realistic and gives a better game if we assign the size of crew that would be assigned to each gun in the real thing – a good rule-of-thumb would be six men per gun. Each gun would have a ‘gun position officer’ – an NCO – and each troop would have a ‘Troop Commander’ – generally a lieutenant with a command post team of three or four signallers and other specialists. 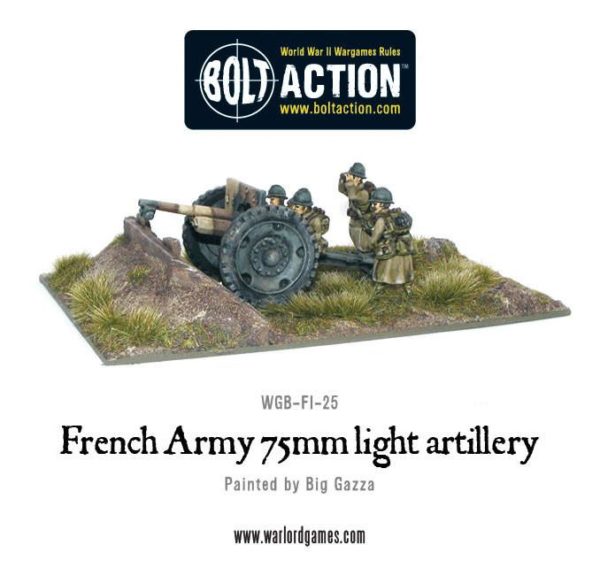 The gun itself is going to provide some degree of cover even if it did not have a gun-shield and very often the guns (and the troop command post) would be dug-in as a protection against air attacks and counter-battery fire. That’s a game in a nutshell – an attack on small squads in trenches where the objective is to capture /destroy the guns or protect them.

So how many guns do we need? Commonwealth field artillery was organised as regiments of three batteries of eight guns divided into two troops of four. In Burma and North Africa it was not uncommon for a troop of four to be deployed for a task, so for an attack on a gun position that’s the smallest realistic number. Of course, one could just use markers to indicate the guns themselves but where’s the fun in that? In any case, a lot of Bolt Action players will already have one or two guns for their collection so another two is not a huge investment… and you know you want to!

Let us know your thoughts and ideas over on the Warlord Forum today!

The new plastic Flak 37 8.8cm – otherwise known as the 88 – is the ideal gun to form your first battery! 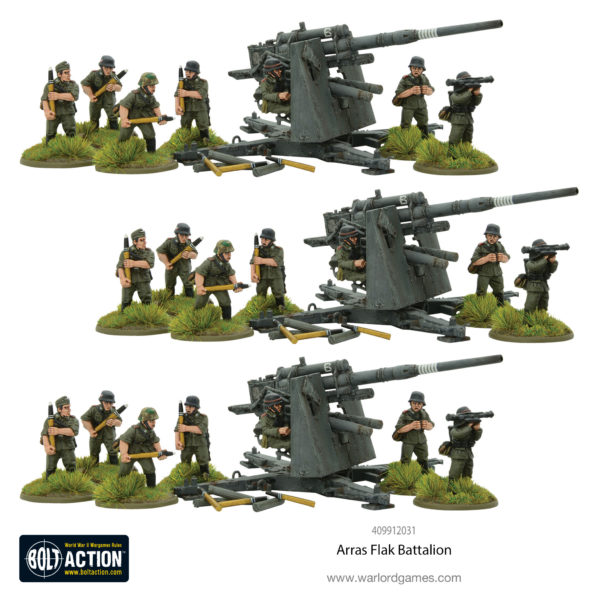 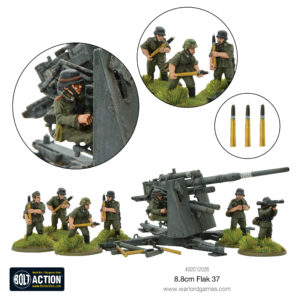 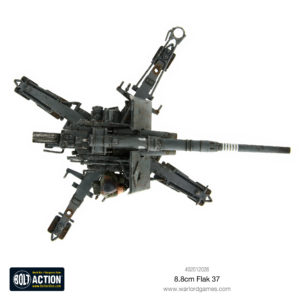 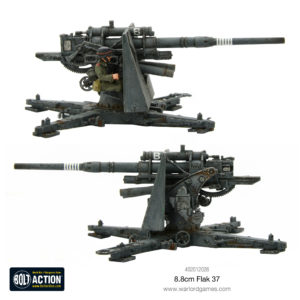 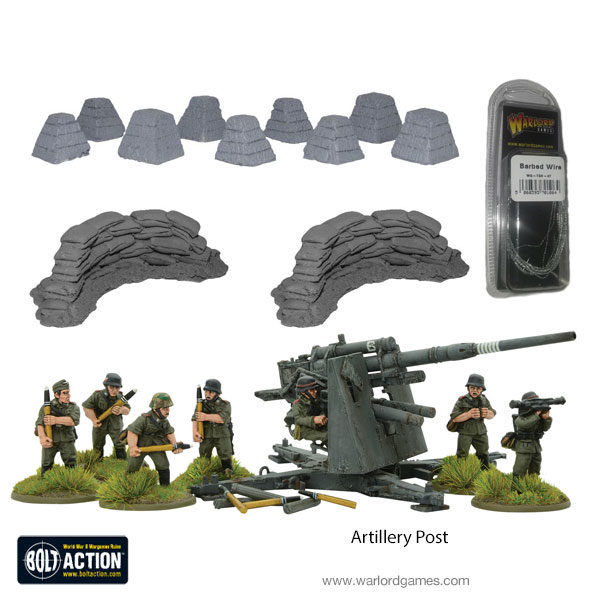 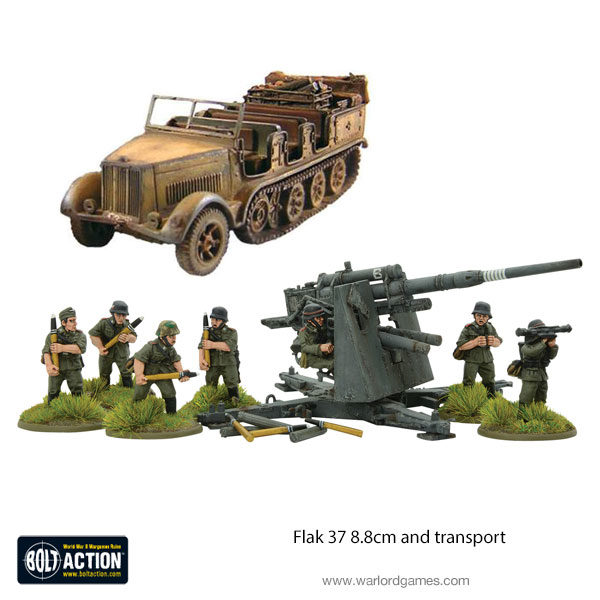