Getting excited about setting sail with our brand new game; Black Seas? We’ve got an article on how you can go about painting your ships!

In the Carronade Era, there wasn’t a clearly defined painting scheme consistently used by specific nations, but rather a fairly limited pallet of colours that could be used in various combinations by each Captain.

Captains of Unrated Vessels and most Frigates could paint their ships in a variety of colours like all white, all yellow ochre, all red, all black, or all dark blue-grey. But more commonly painted the hulls black and added a coloured stripe of varying thickness in yellow, red, pale orange, white, green, or occasionally light blue. Ships-of-the-line tended to have a more limited pallet, so here we present a few ways in which you could theme your fleet. 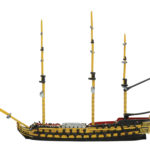 They favoured black for their hulls with one, two or three stripes painted in yellow ochre (described as “baby puke yellow” at the time) which did not necessarily run along the lines of the gun ports. In the 1790s a new chequered scheme was introduced known as the “Nelson checker” which had the addition of painting the outer part of the gun ports black on the yellow stripes. The Masts could be varnished wood, yellow or white with black Tops, Bands and Yards. 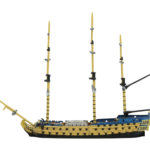 Hulls were usually yellow or red, with black stripes, sometimes with blue details. We have used a slightly lighter shade of yellow for our French and added an upper blue stripe on most of the ships to unify the look of the fleet. Masts were yellow with white, black or blue Tops, Bands and Yards. 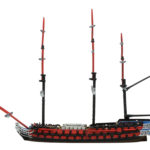 Spanish ships also followed various different similar patterns to the French and the British, however favoured a red or maroon hull with black stripes. They could also add some blue details, especially on the stern of the ships. And like the French, could have white or yellow masts with white, black or blue Tops, Bands and Yards. 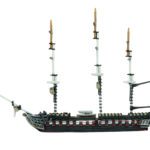 During and immediately after the American War of independence the colours of the hulls would either be quite generic like wood or white with black stripes or would follow the British colours. Later on they started adopting a black hull with white stripes, with black or white masts and wood, white or black Tops, Bands and Yards.

The Inside Bulwarks were usually red, yellow, khaki green, blue, black, or wood and the Gun Carriages red, yellow or wood. The insides of the gun ports were red, yellow, black or wood. The decks were lighter ash or very light wood colour and the gratings, rails, and similar containers or openings on the upper deck were black, wood, red, maroon or a darker wood colour and usually were of one or two different shades on the same deck.

The Keel could be copper, white, black, red, blue, khaki green or wood.

The stern of the ships could be quite decorative and could be painted in either similar colours to the hull, or in a contrasting colour, with black, blue, red, white and yellow ochre being the most popular, but could also have the decorations painted in gold or painted realistically to what they represented.

The figureheads could also be painted to match what they represented or they could be white, gold, bronze or wood.

Tom spends most of his time buying books and painting miniatures. He enjoys putting animals on the bases of his miniatures and half-finishing side projects. Some say that he lives in a tower on top of some windswept northern hill with his wife and cow-patterned cat, Spaghetti.
View Profile | View all posts by Tom Mecredy
Konflikt ’47: US Paragon Program
Pike & Shotte: Heart & Stomach of a King