King Henry VIII’s army clashes with the Irish on John’s majestic gaming table. Robin, our intrepid reporter brings us a dispatch from the frontlines!

This week, we had a game of Pike and Shotte set in Ireland in the 16th Century, an interesting period and one I’m not too familiar with. The Tudor English are keen to keep hold of their domains in Ireland, while the Irish Lords, obviously not being too pleased about this, have formed an uneasy alliance and hope to push the Tudor invasion back into the sea!

While a far cry from my usual fare of Bolt Action, this was an exciting game and happened to be one of
the fastest games of Pike and Shotte that had been seen in Mr Stallard’s awesome gaming room.
Invigilated by Pike and Shotte mastermind Steve Morgan and our own head of Finance Colin Stone, our
forces clashed at a furious pace. The game lasted just under two hours, but saw much bloodshed, and
resulted in a crushing defeat for the Irish. 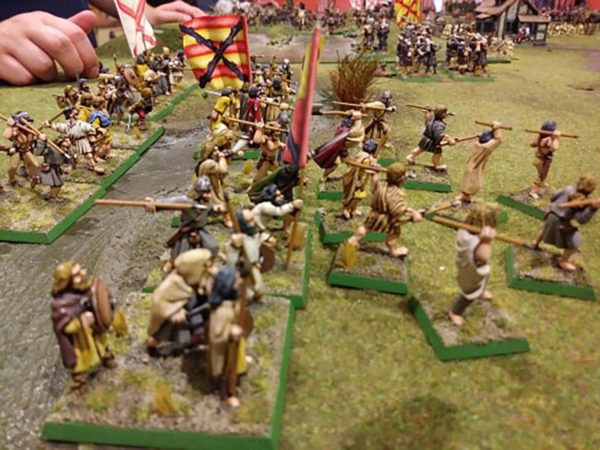 The English consisting of myself (Robin) holding the centre, Lorenzo (also of Customer Service – we
work best as a team!) holding the left flank and our casting legend Aussie Pete holding the right.
On the Irish side Salesman Charlie held the centre with sculptor Wojtek (my arch-nemesis on the
tabletop), a new member of the Warlord team Connor took the Irish flank opposite Lorenzo, while a friend of
Warlord Jonathan faced off against Pete.

The English’s aim was to stop the Irish army claiming five objectives on the board, scattered around the
table in fields and cottages. These represented food and provisions that the Irish sought to deny the
English.

Early in the game, it became evident that the Tudor force would seize the day, as the Irish left flank
merely stumbled forward than halted. Devoid of leadership, they stayed in the corner of the table for
most of the game (thanks to Connor!). The Tudors left flank aggressively moved across the battlefield and
engaged The Irish’s terrifying Gallowglass, eventually seeing them off with the English heavy cavalry. 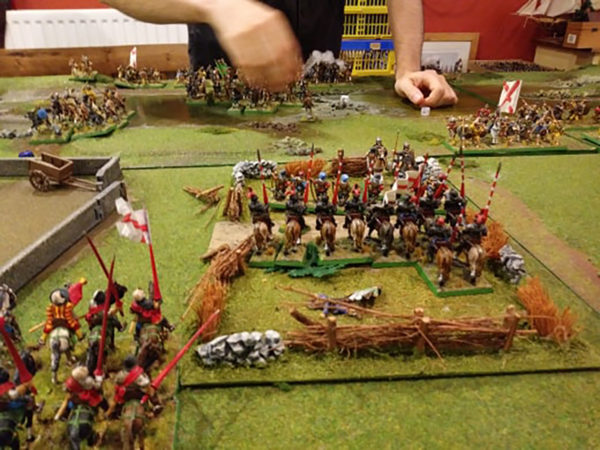 Tudor Demi-Lancers charge in the name of King Henry!

The English centre failed me, stumbling forward. I was hoping to grab the objective in the middle of the
table, the cottage (and reap the rewards of a glorious cup of tea!) but the English detachment of archers
still managed to get to grips with the Irish cavalry and eventually sent them packing, with the assistance
of units from the right flank (unit support in combat is essential in situations like this)! The English right
flank had a more methodical approach, slowly closing on his counterpart across the field, taking fire from
javelins and arrows as he advanced.

Turn two saw the Irish get a small victory with their destruction of the English’s cannon. However, this
was short-lived as the centre’s line was put to flight leaving half of the Irish alone in the centre against two full English brigades. This would not last long, (with some lucky rolls) the English hammered the last of the Irish lines causing multiple wounds and panic in their formations. The English right flank had also entrenched itself acting as an anvil to the other brigades hammer. 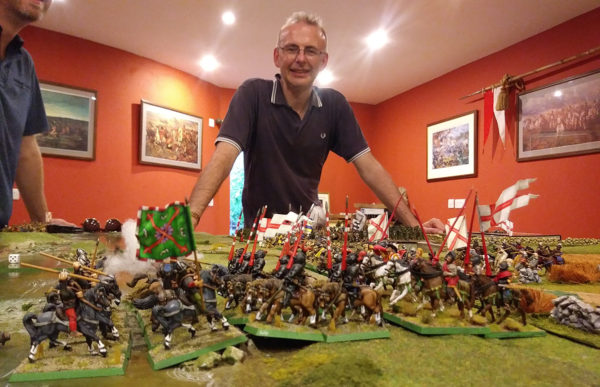 Umpire Colin looks on as the Tudor cavalry decimate their Irish counterparts.

Turn three saw very little movement taking place (some extremely poor order rolls by myself and yet
again by Connor). Despite this, the Irish took yet more casualties. The Irish elites had been broken, and
the less said about the centre, the better… At the end of the turn, the Irish side had claimed none of the
objectives on the board.

With the Irish scattered and bloodied, the English gained the favour of the Queen for our victory. The
Irish, however, vowed that they would return to wreak their revenge…

Join the Wars of Religion! 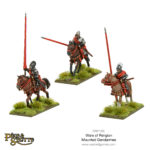 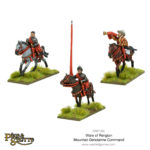 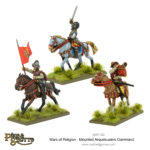 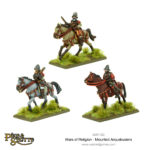 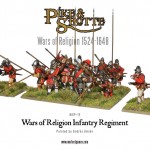 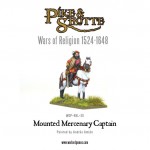 Tom spends most of his time buying books and painting miniatures. He enjoys putting animals on the bases of his miniatures and half-finishing side projects. Some say that he lives in a tower on top of some windswept northern hill with his wife and cow-patterned cat, Spaghetti.
View Profile | View all posts by Tom Mecredy
Black Seas: Painting your Fleet
Soviet Fighter Aircraft