Beyond the Gates of Antares, Concord, Gaming & Collecting, Getting Started, Ghar

Beyond the Gates of Antares: Your First Game – Drone Integration Scenario

Amidst a universe vast beyond comprehension, a universe of human endeavour stretches eons into a dark and turbulent past, a universe of embattled civilisations possessed of unimaginable power. Across millions of worlds rival empires are locked in a struggle for dominance, driven by intellects that are as much machine as human, the omniscient integrated machine intelligence of a society and a time very different to our own.

This is the universe of the Seventh Age of Humanity and the setting for ‘Beyond the Gates of Antares’. Why Beyond the Gates Of Antares? Because that is where our adventures will take us. We will travel through Antarean dimensional gateways to the galaxy spanning empires of the PanHuman Concord and Isorian Senatex, and further to the myriad worlds of the Determinate and beyond. We will board the glittering space borne cities of the Vardari, the great mercantile powers of Antarean space, and we will confront foes as implacable as the Ghar and as merciless as the Renegade NuHu Shards. 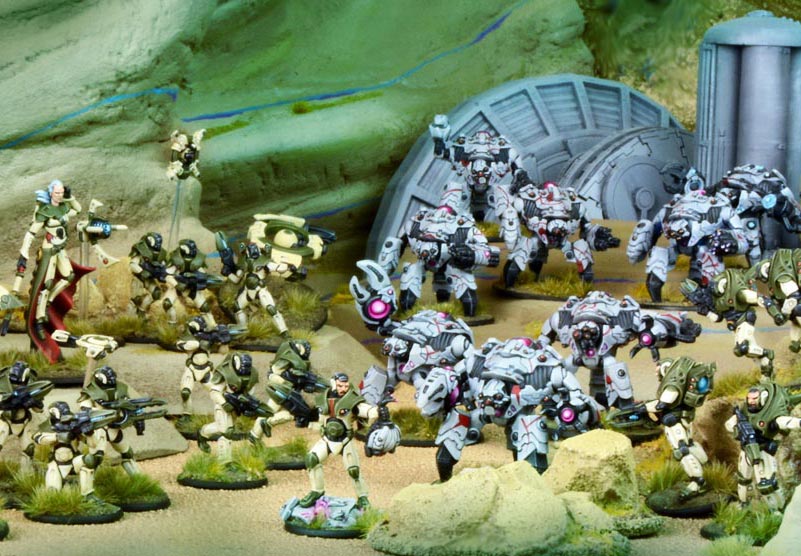 What is Beyond the Gates of Antares?

‘Beyond the Gates of Antares’ is a tabletop wargame that can be played with relatively few models or, if preferred, with substantial armies depending upon the tastes and ambitions of you, the players. The premise of our design is that it should be possible to play a challenging and entertaining game with no more than thirty models a side and taking about an hour to complete.

Antares as a game is also constructed to be easily scalable, allowing for larger forces if players wish to fight bigger games. The army lists in this book provide all the information needed to play the forces described, providing options for different sizes of game from a scouting force to a full army of conquest.

Antares is essentially a game of infantry combat in which larger vehicles, and machines called combat drones, play a mostly supporting role. Of course, as bigger battles are contemplated these machines, together with heavy weaponry of all kinds, will assume a greater level of importance, but for the most part the rules of Antares are concerned with combat between rival troopers. The level of detail covered by the game rules reflects this emphasis.

Don’t worry about learning the whole game at once, it is far better to get stuck in with just a half dozen models a side to begin with and learn as you go along. Before we embark let us remember that as gamers we share a common bond not only with each other but – specifically – with our opponents, without whom there would be no games to play, no dice to roll and no reason to collect and paint our armies. All wargames are to a degree collaborative affairs in which, win or lose, it is the adventure of battle that matters most. These rules have been created to help us moderate our games, but no rules can hope to cover every conceivable circumstance, let alone the inconceivable ones! There will always be occasions when we must rely upon our mutual understanding, consideration and good sense. When we ready our forces for battle let those be the qualities we bring to the table along with our armies and dice.

So – whats the best way to get into Antares? Where can you go to get a feel for the game, it’s core mechanics, and how it all feels?

Head to your local Warlord Games stockist (which can be found at this handy link!) – and ask them for a hands-on demo of the game in person!

They’ll likely take you through the Drone Integration Scenario – one which we’ve specially created to introduce new players into the action using the ‘Xilos Horizon’ starter set contents – with the Concord forces racing to activate a strickened drone – and the dastardly Ghar attempting to scuttle it and salvage the scrap for their own!

But what if you can’t get to a stockist, or you simply can’t wait to get into the action?!

Well never fear – Warlord’s very own Ches headed over to the Beasts of War studios to take Justin and John through the scenario – and they caught the whole thing on camera – so – are you sitting comfortably? 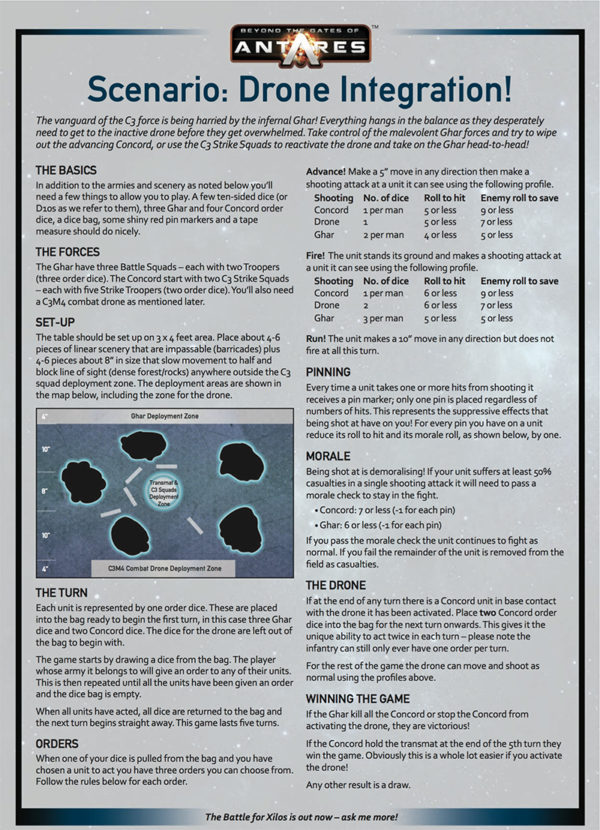 The downloadable match-up has been specifically designed by us Warlord folks to get you playing as quickly as possible using the contents of the ‘Xilos Horizon’ starter box set.

Strike on Kar’A Nine is a new introductory set for Beyond the Gates of Antares containing forces for both the Algoryn and the Concord, with dice, rules and templates plus a fold-out battle mat and cut-out terrain – everything you need to get started with the game. 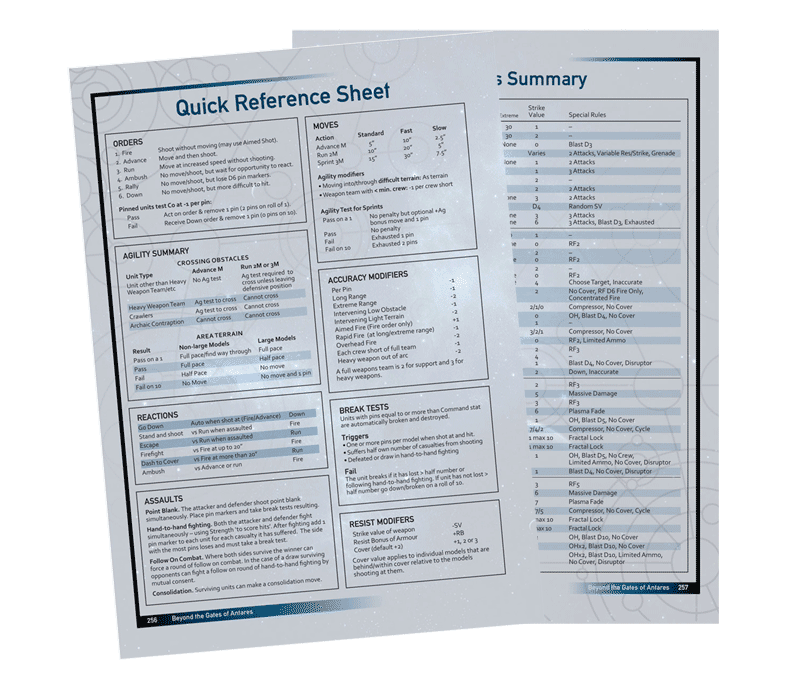 Now for a complete battle

Re-join Ches and the Beasts Of War crew to battle for victory!

Where to get started?

You can’t go wrong with our 2 plastic starting armies. Both of these expand on the troops included in the starter set ‘Xilos Horizon’ and rapidly expand your armies with the core troops needed for larger battles: 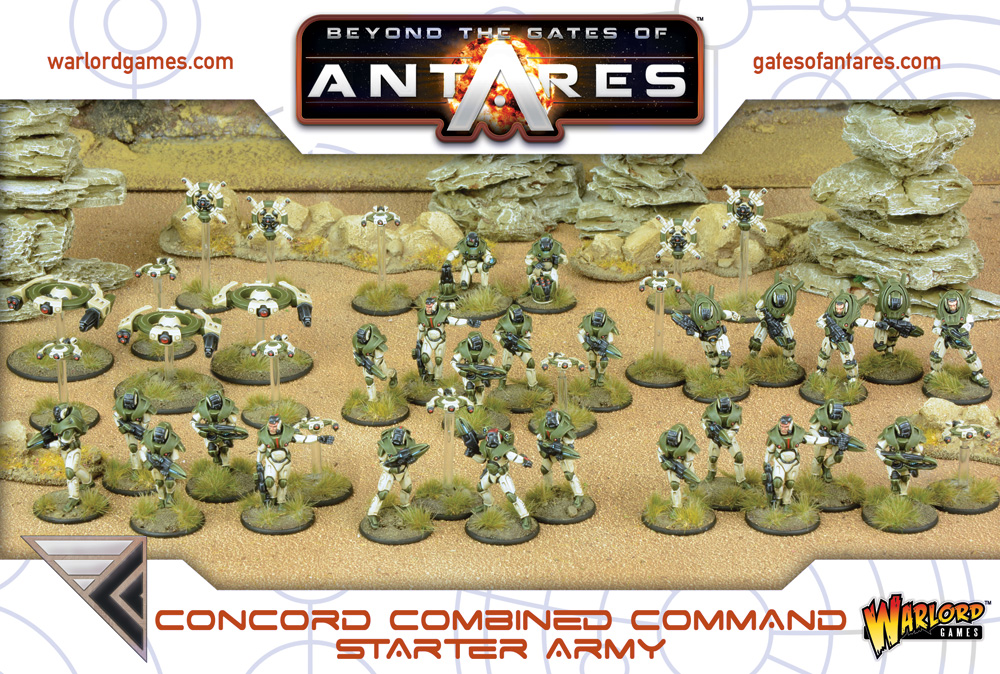 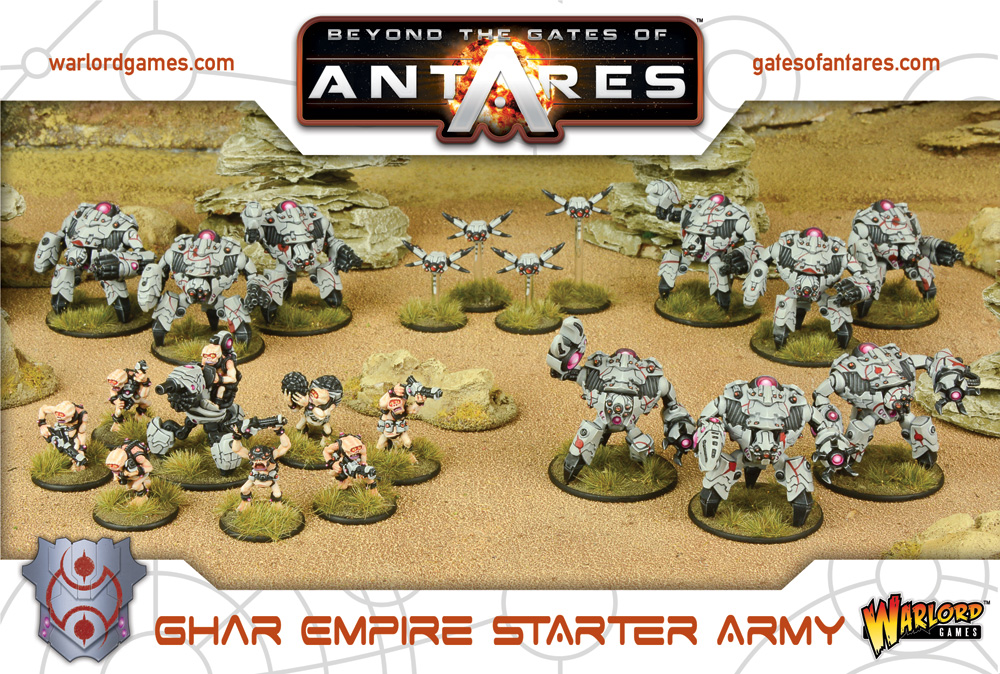 Once you have these you can delve further into the vastness that is Antares by adding to your armies from the full ranges here: 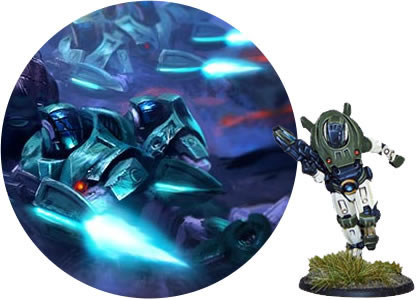 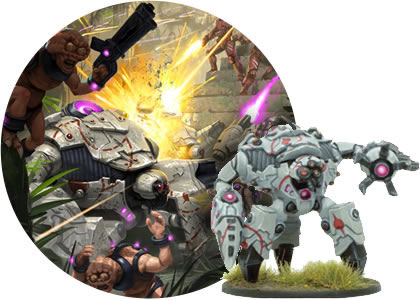 Don’t forget that the Warlord Studio have also put together great sets of colours to help you match the iconic you see within the pages of Xilos Horizon and The Battle For Xilos rules books: 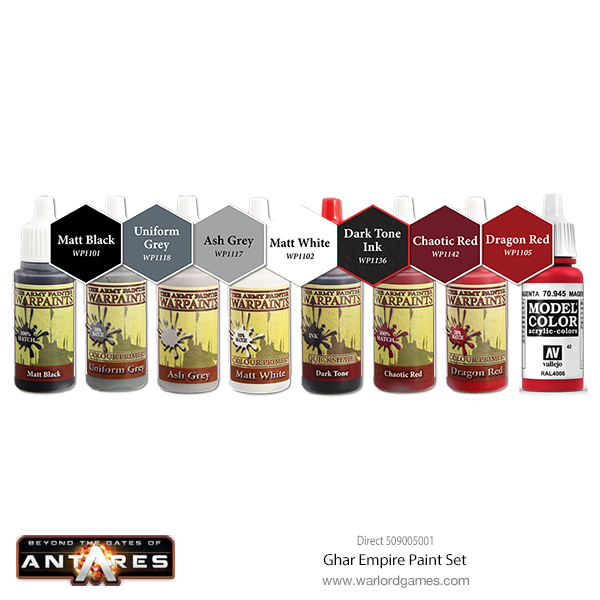 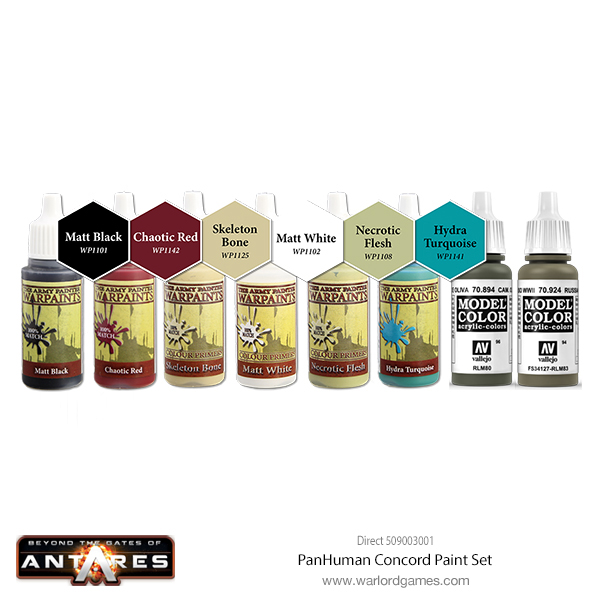 Now on to battle and keep your eye’s peeled on the Warlord Games Beyond the gates of Antares facebook page for the most up to date news and more!

Beyond the Gates of Antares594 Getting Started20 Videos22