We’re touching base with Mike Newton in Australia again to bring you another account of his Bolt Action exploits. This time, assisted by his son, he’s pitted Soviets against Germans in a desperate battle for control of some forgotten farm on the Eastern Front.

Take it away, Mike!

Mike: The battlefield is a farmhouse on a knoll, with a road flanked by fields and other agricultural buildings.

Farmhouse and buildings are enterable. The farmhouse has 2 windows on each ‘blank’ side to reflect a more normal building. The outbuildings are assumed to have holes as necessary for firing points. 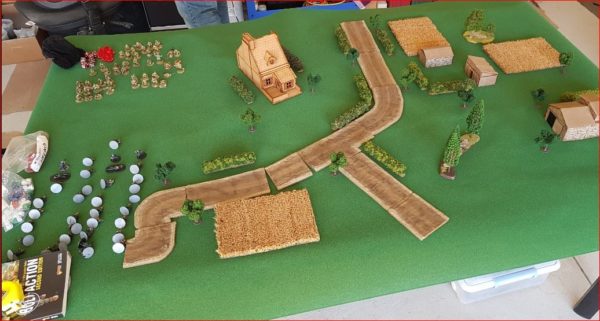 This battlefield is the perfect example of a terrain layout for low points games of Bolt Action. A few buildings and area terrain to provide focal points for objectives, with lots of scatter terrain and linear obstacles to disrupt movement and line of sight. Well done Mike!

We rolled to randomly determine a scenario and got Meeting Engagement.

This is a classic pitched battle, with a slight twist – models don’t start on the table. They have to be brought with an advance or run order on turn 1. 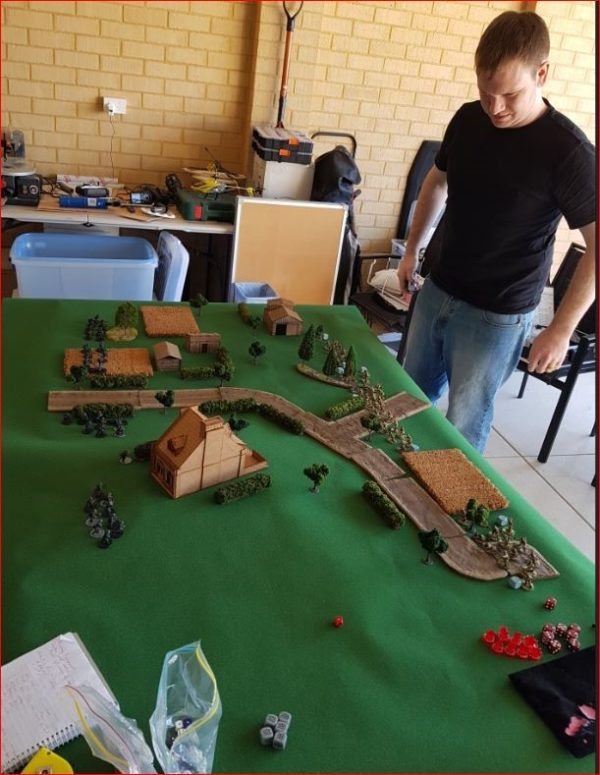 Neither of us held anything back in reserve, so turn 1 became a mad dash for cover. 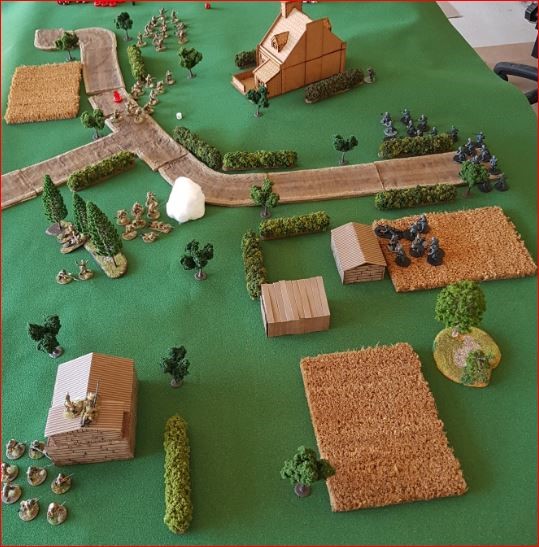 The battlefield at the end of turn 2.

The Soviet light mortar advanced and popped smoke. The team’s accuracy left something to be desired, and the smoke bomb landed just close enough to screen the German attack.

A squad of Germans dashed into the farmhouse – objective secured?

No objectives in this scenario, Mike. Kill ’em all!

The sneaky Soviets all got the opportunity to move forward before their German counterparts, with the anti-tank rifle team scuttling into the barn.

On the knoll, some distance from the house, one of the German squads caught sight of some Soviets and opened fire, scoring 7 hits but only 1 kill. 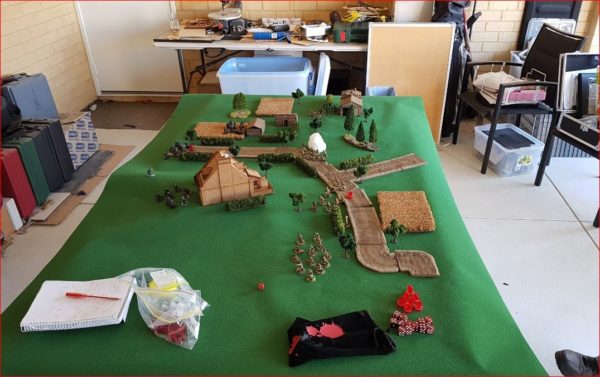 The battlefield at the end of turn 3.

The wind drops and the smoke remains where it landed.

The Soviet squad on the road remains in place due to a failed morale test, while the other 8 man Guards squad ploughs through the smoke and opens up on the Germans crossing the road.

The Soviet commander orders another smoke barrage on the farmhouse.

The German squad rushing up the knoll continues to support the unit already entrenched inside the farmhouse.

Somehow in the barrage of bullets and drifting smoke, the German squad on the road opens up on the shed.

The German squad in the house blazes away at the two Soviet squads in the open.

Windows on different sides of buildings allow the unit inside to split their fire against different targets.

The NCO and 2 riflemen fired at the Guards, while the LMG and the other riflemen at the inexperienced squad. They only managed to knock out 1 SMG gunner.

Better work on those dice rolls, Mike. Maybe some new dice might help?

The Germans sheltering in the shed took the opportunity to set up some better fire positions to ambush anyone coming their way, while the Soviet 2nd Lieutenant moved out to support his inexperienced conscripts and help them find their backbones. 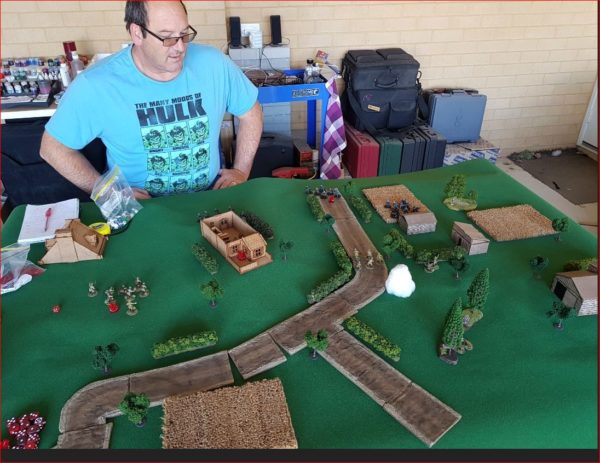 The state of play at the end of turn 4.

One of the 8-man Soviet squads stormed the shed, with 3 dying on the charge, with the Germans taking 1 casualty in return. From the safety of the building, the Germans manage to finish off the Soviet attackers.

The inexperienced Soviet squad takes a pot-shot at the Germans behind the house, killing 2. Returning fire with their MG-42, the Germans killed 5 in return.

The light mortar shells the farmhouse, causing no casualties.

Haranguing his hapless subordinates, the German 2nd Lieutenant orders them to fire at the Soviets on the road, killing 3 of them, including the LMG gunner. His work complete, the 2nd Lieutenant ducked behind the hedge at the back of the house.

The German squad in the shed slip back into the wheat field and pick off a few Soviets through the smoke.

The Soviet SMG squad was ordered to assault the farmhouse but changed its mind. Luckily, the commissar was on hand to enforce some battlefield discipline, hurling the reluctant soldiers into the attack, minus one of their number.

Another two died in the attack, but the tough fighter special rule gave them the edge and the Germans in the farmhouse are wiped out.

The Soviet anti-tank rifle moved up from the barn to take cover in the hedge. 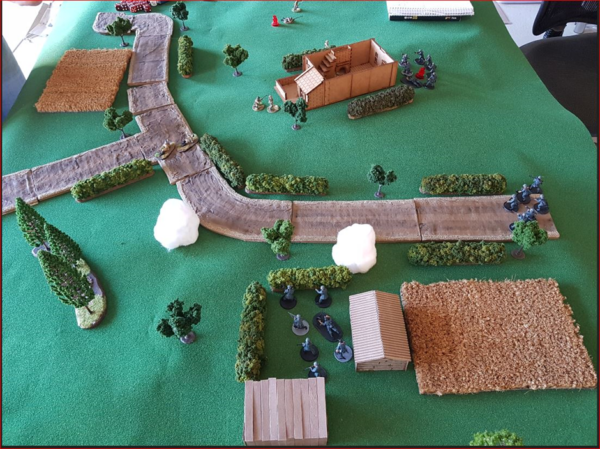 The battlefield at the end of turn 5.

The inexperienced squad failed another order test, and the commissar shoots another unfortunate conscript.

Our record for commissar kills in a single game is 6, can you beat it?

The 3 remaining SMG gunners failed their order test, as they’re more than 6 inches away from the commissar, they go down without taking any further casualties.

The Soviets on the road opened up on the Germans at the other end. The Germans dive for cover but take no casualties.

The anti-tank rifle squad crawled through the hedge, taking a pot-shot at some nearby Germans.

The German squad behind the house opened fire, killing another 4 members in the inexperienced Soviet squad, leaving them with 2 members.

The Soviet mortar fired more smoke but it fell just short of the target.

In the extremely light breeze, the smoke drifted back towards the Soviets.

The depleted SMG squad in the house tried to shoot the Germans hiding around the back of the building, scoring a hit but no wounds.

Back on the road, the Germans finally finish off the Soviets staring them down.

The commissar decided not to assault the German 2nd lieutenant, but advanced to point blank range and scored a hit, but caused no wounds. Backing up the terrifying disciplinarian, the inexperienced squad fired at the downed German officer but missed.

The Germans in the wheat field dashed out to try and catch the anti-tank rifle team but suffered a single casualty.

The German squad behind the house failed their order test and went down, rather than assault the Soviets inside.

The light mortar snapped off a shot at the downed German 2nd lieutenant but missed. 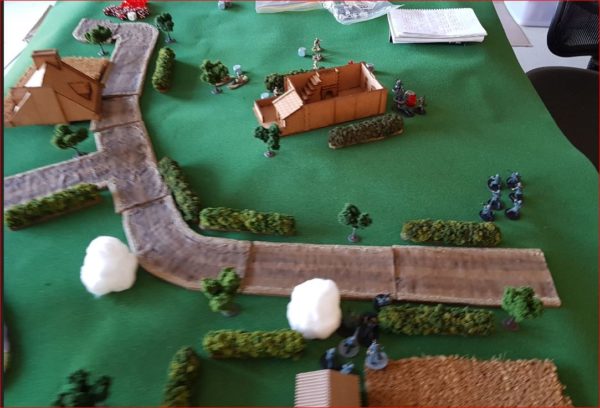 The battlefield on the last turn of the game.

We rolled for game length and got 1 more turn.

The smoke remained stationary, with no wind to carry it around the battlefield.

The Soviet 2nd Lieutenant attempted to mobilise the SMG squad in the house. They failed their test, but the commissar stepped in and encouraged them by shooting another man. Firing out of the windows, they killed another 3 Germans, while the officer fires at his German counterpart, pinning him down.

The German squad misunderstood their orders and dug in behind the house, rather than assaulting the depleted and demoralised Soviets inside.

The light mortar made a dash for cover, desperate to not get added to the German kill tally.

The remaining German squads poured fire into the farmhouse, killing a single SMG gunner. The survivors inside failed their initial morale test, but after their Vodka re-roll, they decided to stay put.

The Germans win 3 kill points to 1.

Tom spends most of his time buying books and painting miniatures. He enjoys putting animals on the bases of his miniatures and half-finishing side projects. Some say that he lives in a tower on top of some windswept northern hill with his wife and cow-patterned cat, Spaghetti.
View Profile | View all posts by Tom Mecredy
Frontline Report: 90. Leichte Afrika Division
Character Focus: Durham Red