The Battle of Inchon

Dive into the history of MacArthur’s Korean War masterstroke with our article on the devastating amphibious landings at Inchon!

“We shall land at Inchon, and I shall crush them!” – General Douglas MacArthur

The North Koreans had forced the remnants of the South Korean Army and the American forces into a tight defensive perimeter centred on the ancient port of Pusan in southeast Korea. American reinforcements continued to arrive, the 1st Cavalry Division from Japan and the 2nd Infantry Division and the 5th Marine Regiment from the United States. The British 27th Infantry Brigade shipped out from their posting in Hong Kong and deployed to participate in defence of the UN Resolution to halt the KPA aggression. The engagements and fighting all along the Pusan perimeter was some of the toughest of the entire war.

The KPA probed, attacked, shelled and battered the UN line for weeks trying to break through before enough reinforcements could arrive in time to save the war for the South Koreans and the UN Allies. The KPA exerted all their efforts to break through the Pusan perimeter and split the defensive line. If the KPA could capture the port, the war would nearly be over. 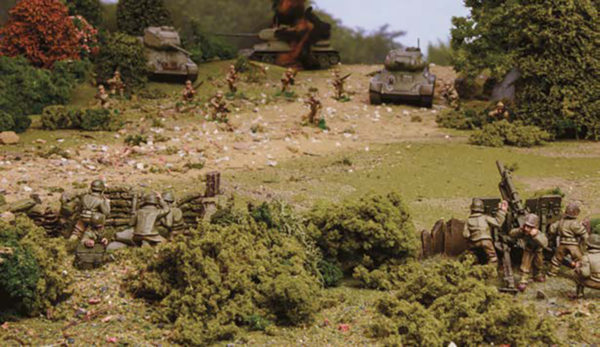 Dogged defence and raw courage prevented the North Koreans from breaking through the ragged UN line. Coordinated use of the small force of US tanks available, combat air cover and the heavy guns of close-in naval support kept the KPA from punching through. By the early portion of September, the KPA were starting to wear down, they were a spent force physically and morally. The extended supply lines and the lack of trained replacement soldiers began taking a serious toll on the effectiveness of the capability of the KPA as a fighting force.

While the North Koreans were breaking like waves on the immovable rocks of the UN defensive line around Pusan, a tactical masterstroke was about to be conducted with the amphibious invasion of Inchon. General Douglas MacArthur envisioned the effectiveness of the landing at Inchon a month after the first shots of the war. He predicted, accurately, the North Koreans would overextend their supply lines and would be highly vulnerable to an amphibious attack in the rear line of battle. This attack would interrupt their resupply capability and their lines of communication and allow for the liberation of Seoul.

“The amphibious landing of U.S. Marines on September 1950 at Inchon, on the west coast of Korea, was one of the most audacious and spectacularly successful amphibious landings in all naval history.” – Bernard Brodie

The coordination and planning for the Inchon landing was severely complicated due to the exceptionally difficult shift in the tides and the speed of the currents in the harbour. There were also sea walls the soldiers and marines would be forced to scale with ladders. In fact, Inchon harbour was considered the worst location in Korea to conduct an amphibious landing.

The landing at Inchon on September 15, 1950 under the code name Operation Chromite was a complete and total surprise to the North Koreans, achieving a complete tactical victory. The US 7th Infantry Division and the newly reactivated 1st Marine Division along with units from the South Korean Army and Marine Corps captured Kimpo airfield and Seoul. The fighting was bitter and challenging in and around the suburbs of Seoul. The North Korean Command was in shock and needed to withdraw remaining units from Pusan or face being cut off and captured if not totally destroyed by the Inchon landing force.

The Battle of Inchon

“I can almost hear the ticking of the second hand of destiny. We must act now or we will die.” – General Douglas MacArthur

The Battle of Inchon (code name Operation Chromite) was fought from 15th September to the 19th. It involved 75,000 troops and 261 naval vessels of all shapes and sizes. This surprise amphibious assault resulted in six to one odds against the KPA defenders and released the pressure on the Pusan Perimeter. 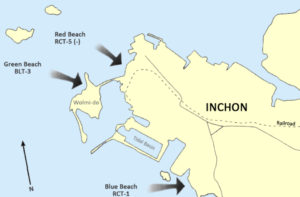 The Inchon area was divided into three main areas of attack, identified as Blue, Green, and Red beaches. Due to the unique nature of the tides in this area, the landings had to be staged at different intervals. The first wave went in onto Green Beach and this attack started at 0630 on 15th September 1950 with Blue and Red Beach not being able to bring in the second wave of troops until much later in the day, not until the tide rose
again around 1950.

A total of 261 ships from several UN nations took part in this amphibious landing of right around 40,000 UN troops alongside countless aircraft. Opposing the massive armada were approximately 6,500 infantry, one patrol boat, approximately 19 aircraft, and one land-based fortress. Because of the successful disinformation campaign run by the UN forces, the KPA forces figured the Inchon landings were a diversion and the main forces would be landing at Kunsan. 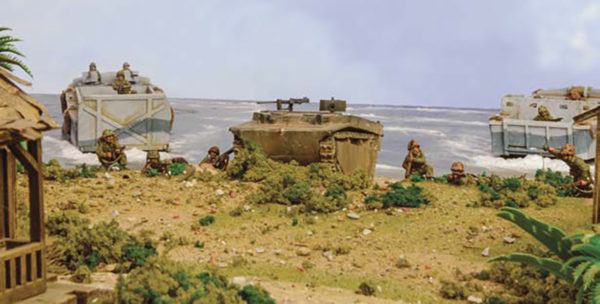 There was only one reported communist air attack during the entire landing. A Yak-9 and an Ilyushin II-2 ‘Sturmovik’ attempted an attack on the USS Rochester and the HMS Kenya. The communist aircraft dropped four bombs on the US ship but only hit it with one which failed to detonate, striking and denting a loading crane on the deck. Anti-aircraft fire from a nearby ship hit the II-2 and caused it to crash into the bay. Later the US crew painted a Purple Heart on the crane.

The massive success of the surprise landing Operation Chromite led to the recapture of Seoul two weeks later. Additionally, it cut the KPA’s supply lines into southern Korea, greatly hampering their efforts to hold the Pusan perimeter. These two events contributed greatly to the rapid retreat of KPA forces all the way back to the Chinese border.

Getting Started with Bolt Action: Korea

Tom spends most of his time buying books and painting miniatures. He enjoys putting animals on the bases of his miniatures and half-finishing side projects. Some say that he lives in a tower on top of some windswept northern hill with his wife and cow-patterned cat, Spaghetti.
View Profile | View all posts by Tom Mecredy
SPQR Talent Focus: Archer of Legend
SPQR: FAQ