The use of aircraft for coastal defence and reconnaissance is well documented throughout WWII. In Cruel Seas, they can be a powerful asset for any flotilla.

We have included the most common or iconic aircraft in the rules. Increasingly during the war, they were the bane of coastal forces, particularly for the Axis who had to respond by up-gunning their ships and boats with an extravagant number of flak guns. There is a great deal of fun playing with aircraft, both in strafing enemy vessels or in downing one with anti-aircraft fire.

They are dealt with differently and somewhat impersonally, as our game principally revolves around the small boats. From primitive beginnings (many were biplanes, and had underdeveloped weapons and engines), more dedicated aircraft would be considerably developed during the war. Increasingly faster and deadlier they would become feared by the coastal forces and particularly by the mosquito fleets.

Tactically, aeroplanes would hunt down individual boats, attacking them during the day with machine guns, cannons, bombs and later rockets. 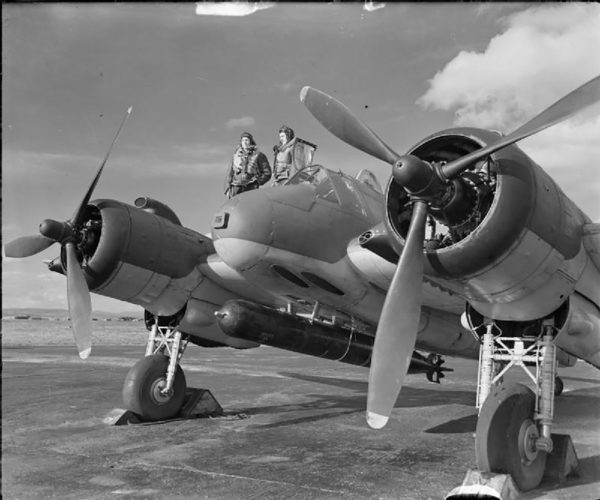 A Coastal Command Beaufighter with a torpedo loaded and ready to go.

Tactically, aeroplanes would hunt down individual boats, attacking them during the day with machine guns, cannons, bombs and later rockets. It was dangerous work, as the small boats used their machine guns and automatic weapons to significant effect in repelling air attack.

Even at night, the boats could be attacked if it was a moonlit night, or the aeroplanes could light up the area with parachute flares to aid nearby allied vessels or before attacking themselves.

Aircraft, like coastal craft, come in all sorts of shapes and types. They range from small spotter float planes to huge long-range flying boats capable of flights covering a full day.

Rather deadlier were single or twin-engine fighter/bombers that delighted in strafing light vessels.

Either could be deadly to small craft. Rather deadlier were single or twin-engine fighter/bombers that delighted in strafing light vessels and, as armament increased progressively during the war, could even sink vessels with gun power alone. Add bombs or rockets into the mix and attacking planes are a skipper’s worst nightmare.

Of course, the pilots did not have it all their own way, the usual terrors of combat being magnified by the dreadful prospect of ditching in the sea with slim hope of rescue.
Small ships could put up a stiff resistance to attack from the air. These small ships were fast, nimble targets difficult for fighters to lock onto. They could also pack a punch, fighting off multiple attacks with heavy automatic weapons which could quite effectively down or drive off aircraft.

Having a few aircraft to support your flotilla can give you an edge over your opponent. They’re fast, manoeuvrable and pack quite a punch with their bombs or torpedoes.

As mentioned, Cruel Seas is focused on the small ships and as such we’ve wrapped up the effects of straffing and bombing together to speed things up – if you wish to break this down further (eg. the lovely “Whispering death” aka the Beaufighter with its many cannon and HMGs) then please do in your own games and let us know how it goes!

With a standard move rate of 140cm, aircraft zoom across the battlefield at break-neck speed. You’ll only get one or two attack runs out of each plane, but each strike has the potential to do catastrophic damage.

You’ll have to anticipate your enemies likely course of action as you need to write down what turn your support is arriving on. Once that turn arrives hold them back until your enemy provides a juicy target to present itself and then unleash hell!

Make sure you’ve got a clear path as straying within 20cm of other enemy ships could get you shot down by the extra flak that they’re sure to send your way! 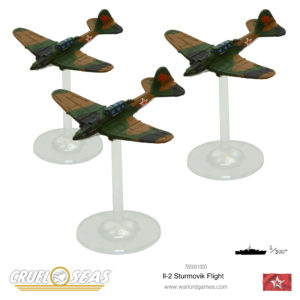 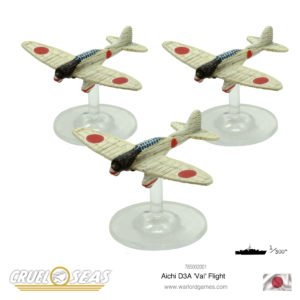 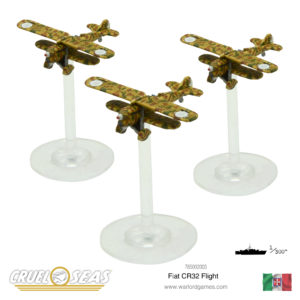 Tom spends most of his time buying books and painting miniatures. He enjoys putting animals on the bases of his miniatures and half-finishing side projects. Some say that he lives in a tower on top of some windswept northern hill with his wife and cow-patterned cat, Spaghetti.
View Profile | View all posts by Tom Mecredy
Theatre Profile: The Mediterranean Sea
Community Showcase: Johnathan Gallar’s Bersaglieri