With the release of our brand new Battle of France book just around the corner, we’re picking out some of the details that set the period apart from other theatres of the war. This week, we’re scrambling across the Ardennes forest in pursuit of the Chasseurs Ardennais!

The Ardennes forest is a vast expanse of dense woodland, rough terrain and rolling hills covering the border region between Belgium, France and Germany. In 1931, King Albert of Belgium raised an elite light infantry unit was raised to defend this massive natural fortification.

“They are not men, they are green wolves”. – Erwin Rommel

Starting from humble beginnings as a single battalion, the Chasseurs Ardennais expanded to a full division of some 30,000 troops. Each regiment was a mix of foot and bicycle-mounted infantry, with motorcycle squadrons in support. There were also tank companies and heavy artillery batteries available at the divisional level.

With Europe teetering on the brink of war, the Belgian defensive strategy focussed away from the natural barrier of the Ardennes towards the Gembloux Gap. Lines of defence were established along the Meuse River and Albert Canal. The Chasseurs were not expecting heavy fighting. Instead, they prepared to fight a delaying action, using the close country to their advantage. 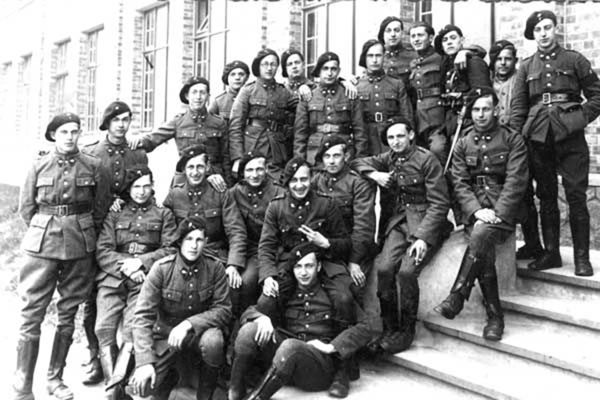 A group of Chasseurs Ardennais pose for a photo, 1930’s.

When the blow fell, Panzer Group von Kleist hammered through the Ardennes in a matter of days with a carefully planned advance down four major roads towards the distant Meuse, completely bypassing the French fortifications on the Maginot line.

Strung out along a vast frontier, with no support beyond their organic tank and artillery units, the Chasseurs Ardennais became embroiled in a series of costly delaying actions. Their tenacity and knowledge of the terrain allowed them to significantly disrupt the German advance in several places but were often forced to withdraw in the face of superior numbers.

The division’s ferocity and pigheaded stubbornness earned them the moniker “the Green Wolves” from German commander Erwin Rommel.

The Chasseurs Ardennais in Bolt Action

If you’re looking to stiffen the backbone of your Belgian regulars, adding a small squad of Chasseurs Ardennais is a quick way to give your force some much-needed staying power. With a versatile array of weapons and special rules, this unit is incredibly adaptable and equally at home on the attack or in defence.

Add a BAR or a VB launcher for extra firepower, or take the Tough Fighters rule and some anti-tank grenades for some improvised anti-tank capability.

We’ve put together a unit card for you to use in your games of Bolt Action. Just download the picture below and print it out. It’s got all the rules you’ll need to refer to for the unit during the game. 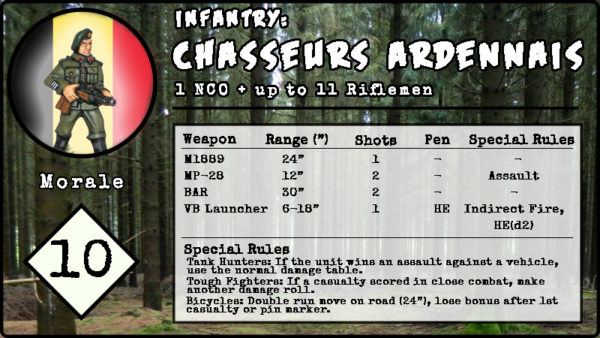 Defend the Ardennes and grab your Chasseurs Ardennais from the webstore! 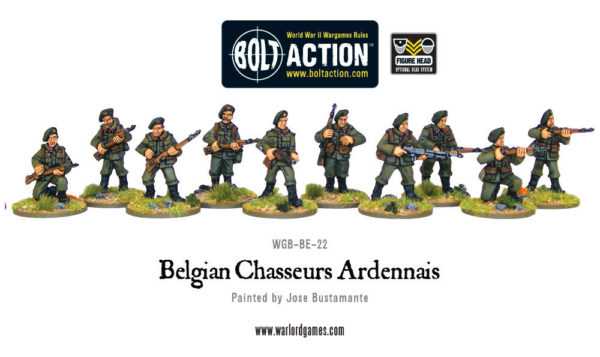 Tom spends most of his time buying books and painting miniatures. He enjoys putting animals on the bases of his miniatures and half-finishing side projects. Some say that he lives in a tower on top of some windswept northern hill with his wife and cow-patterned cat, Spaghetti.
View Profile | View all posts by Tom Mecredy
Spotlight: Jamie’s Last Levy
Osprey: The French Army 1939–45 (1)