The Guys over at Clockwork Goblin dropped us a line with a lovely little extra for your battles in Wierd WWII – Walker Platoons! 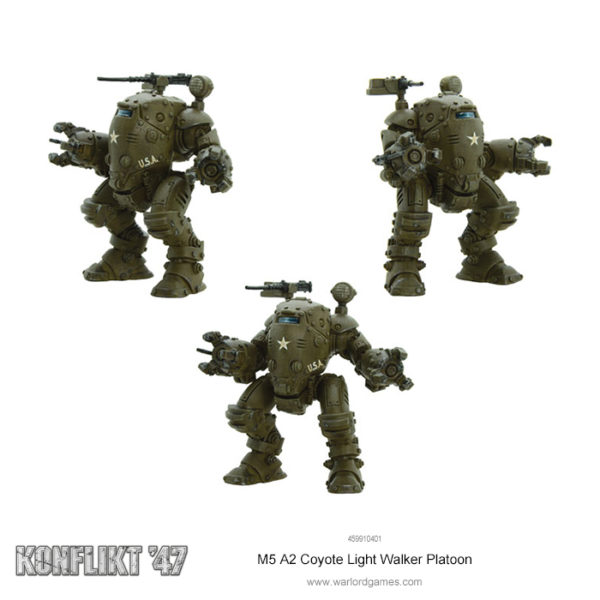 Chris: Konflikt ’47 is structured to capitalise on all the good work within the Bolt Action game. One of these pieces of work is Tank War, designed to allow armoured platoon games of Bolt Action. Obviously this is an option we want to bring to Konflikt ’47, so this document contains the details needed to play a Tank War version of the Konflikt game. You will need a copy of Tank War as this document will apply notes and changes to the rules in the Tank War book. In the first official Konflikt ’47 supplement next year (Late 2017) we aim to formalise these rules, but this document will allow you to get started with your Armoured and Walker platoons.

No changes, the book as presented, obviously all references to tanks and armoured vehicles can be considered to include walkers and panzermechs. 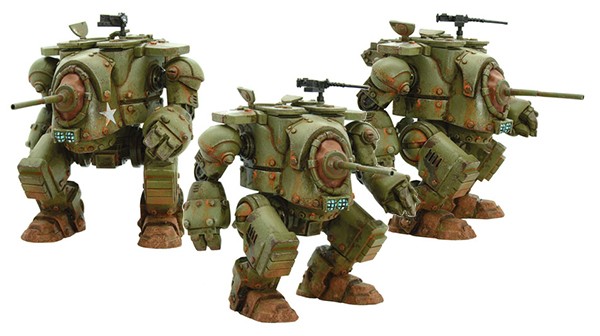 The Tank War Armoured Platoon Selector can be used as presented in the book with the addition that any walker or panzermech can be taken as a vehicle choice in the selector. A walker or panzermech may also be the Command Vehicle if desired. As usual, all infantry and artillery must have associated transport.

Lack of Radios (page 11). By 1947 radios are considered essential equipment for all armoured vehicles. The restriction on radios is lifted completely, no forces suffer the lack of radio penalties.

Vehicles and Pinning (page 13), ignore this entry and use the regular Konflikt ’47 vehicle pinning rules (which should be the same anyway).

The suggested requisition points in Tank War are still determined by both players as normal, it will largely depend on the time available for the game. With the late/post war setting of Konflikt ’47, many of the vehicles are more expensive in terms of requisition points, so a larger game total may be needed to allow second platoons if desired. 1500 points will give an enjoyable game, but 1750 may be needed to incorporate some of the heavier vehicles.

When setting up the battlefield, remember to discuss with your opponent which obstacles or terrain are passable or impassable to walkers and tanks.

These optional rules are a fantastic part of Tank War, allowing you to build and personalise your crews over a continued series of battles. They are available as normal if both players agree to their use. Walker and panzermechs can use the same experience rules.

The following changes need to be noted with respect to the skills acquired in the crew experience rules.

No changes to the rules as presented, although in Konflikt, only the later war variants would be likely seen on the battlefield. Tank Command variants can lead walker platoons if desired.

Standard tracked ARV can be selected as per the rules in the book, the only nation to create a walker ARV are the US. By converting a Grizzly chassis, the US produced a highly mobile ARV that could repair and remove damaged walkers and tanks effectively under fire. The versatility of its arms gives it an advantage over its tracked counterparts as the crew did not always have to dismount to achieve its objectives.

The versatility of the Grizzly chassis saw it utilised for many tasks, including that of a highly mobile ARV. Replacing its fists for a utility lifter and engineering arm, a crane assembly was added to the hull. Reliable and able to get to damaged vehicles in difficult terrain, its arms and crane combination could often lift lighter vehicles out of trouble. Popular with its crews as it can complete many tasks without the crew having to dismount. Some ARVs were seconded to engineer units to assist with route clearance and obstacle clearing and creation. 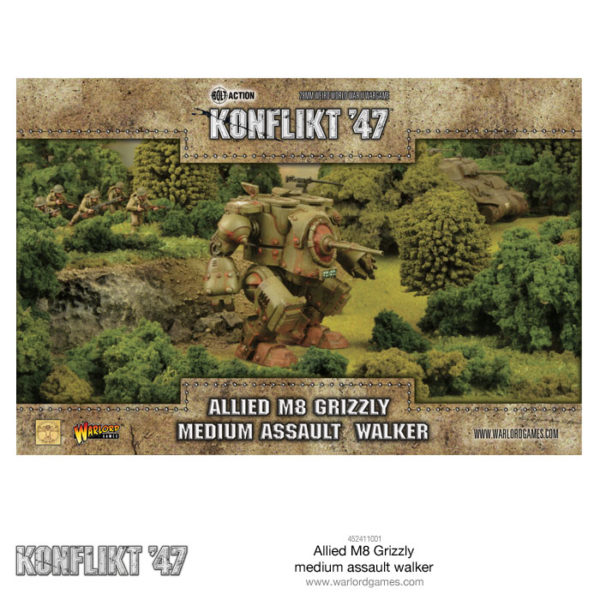