Head to Head: Tiger Vs Churchill

With the recent release of Bolt Action Second Edition, I thought it time to take a look at two of the most famous and iconic tanks of the Second World War, the German Panzer VI Tiger I, and the British A22 Churchill, Mk III in this particular case. 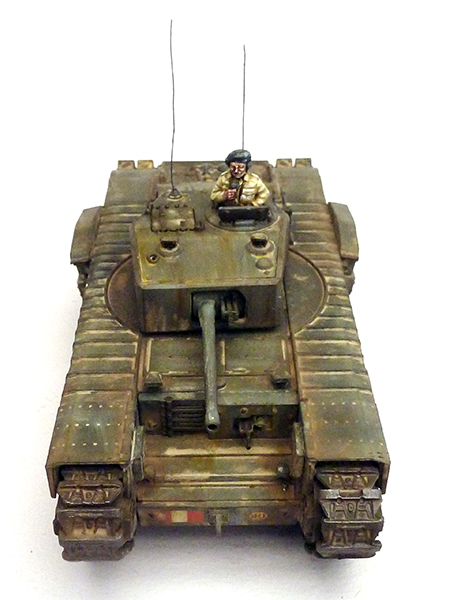 The A22 Churchill tank was the last ‘Infantry Tank’ to be adopted by the British army, and was in many ways a final evolution of the very first tanks designed during the First World War.
Churchill evolved from a pre-war prototypical designed known as the A20, which featured a long hull, and briefly was designed with a sponson mounted armament before a turret was chosen for the armament. Weaponry was envisaged as being low velocity high explosive armament, capable of dealing with enemy infantry strong points, and unsuited for armoured combat. 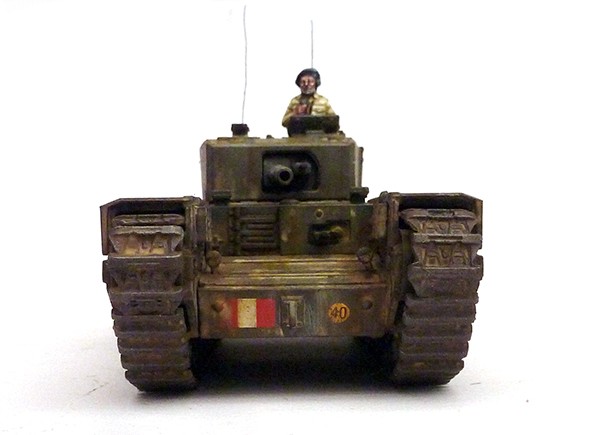 Experience in France however proved this design was entirely unsuited to modern warfare, and the design was further refined into the model A22. The first prototype of the A22 was produced at the end of 1940, with the designed being further refined and tested before entering production in June 1941. Origins of the name are a little murky, with the obvious connotation being that it is named after Winston Churchill, however it’s possible the vehicle was also named after the Duke of Marlborough.

The Churchill design continued to evolve through the course of the war, being up gunned several time, and even having it’s armour increased as well, by the time the Mk VII rolled off the production lines the tank was one of the most heavily armoured of the war, though was always under gunned.

The Churchill’s useful size and eventual reliability resulted in it being used as the basis for many specialised variants too, notably the AVRE variant saw the tank armed with a huge 290mm spigot mortar, as well as specialised engineering equipment, and the Crocodile, a Mk VII armed with a flame thrower supplied from a large fuel trailer towed behind the tank. 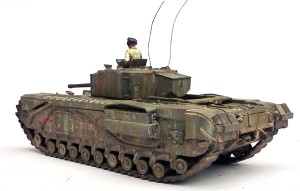 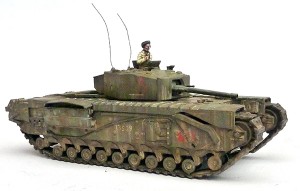 Churchills first saw combat in the 1942 Commando raid on Dieppe, although it’s success was limited here due to the nature of the raid, and the vehicle proved very difficult for the German defenders to destroy and the majority of vehicles were abandoned on the beach when the withdrawal took place.

Churchill MK III’s served with distinction at the Second Battle of El Alamein however, the tanks armour saw it largely impervious to any anti-tank weaponry the Germans possessed, and one vehicle noted having received 80 none penetrating strikes. Churchills were also instrumental in the capture of the first intact Tiger tank captured in the western theatre by managing to disable the turret of a Tiger belonging to 504 heavy tank battalion.

The Churchill tank served right beyond the end of World War 2, with Crocodiles being sent to fight in the Korean War, and the vehicle serving with the British army into the 1950’s. The Irish army purchased and operated 4 Churchills into the 1960’s, before they were ultimately retired. 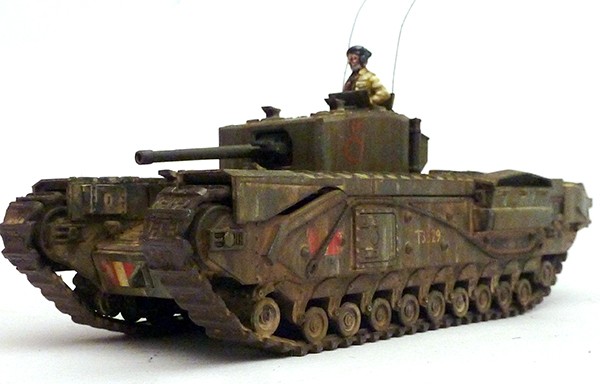 Today, many Churchills remain as monuments and preserved examples, with several AVRE variants being preserved at the Royal Engineers Museum in Chatham, Kent.

The Churchill Mk III can be fielded at any experience level, with a Regular tank being costed at 265 points. The vehicle features an armour 10+ rating, as well as a hull machine gun, medium anti-tank gun as well as a coaxial machine gun, although it unfortunately also has the ‘slow’ rule. 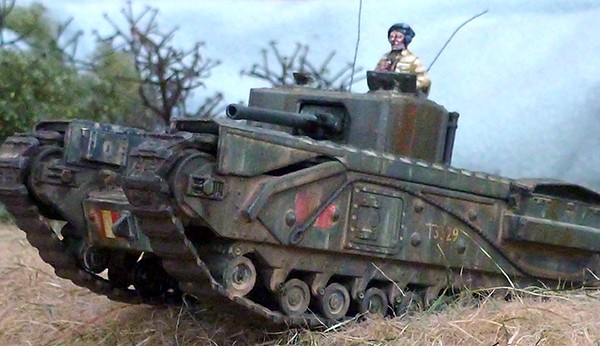 Slow limits the Churchill to a maximum speed of 6” with an advance order, and 12” with a run. This forces the Chruchill into its role as an infantry support tank as it’s not armed with a weapon to truly terrify enemy tanks, however it is still a capable weapon that can at least put pins on anything, and destroy most vehicles, especially once it gets under half range.

With the changes brought in with Second Edition, the Churchill now has a 1” blast for it’s medium anti-tank gun, and this makes it quite adept at taking out snipers, weapon teams, and command elements, and fulfilling its wartime use of supporting infantry and helping them advance to an objective.

In game, tactically I feel the best way to use this tank is as moving cover for your infantry with it’s large size offering decent obstructions to lines of fire, and using it to grind up the board to get to where you need to be whilst throwing out supporting fire to wherever is most pressing. At 265 points as well, the vehicle won’t eat a huge amount of your force for what is a very resilient vehicle and you will still be able to have a decent mass of bodies to keep it company. 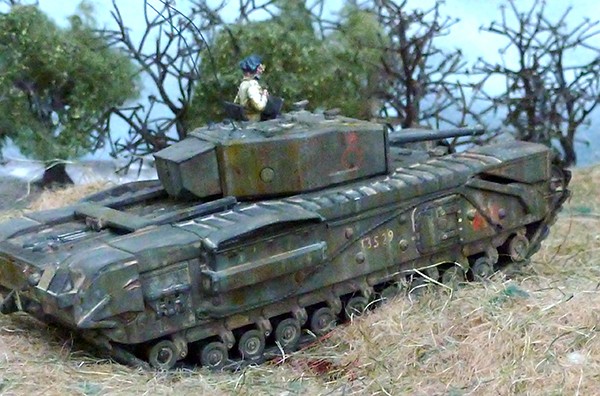 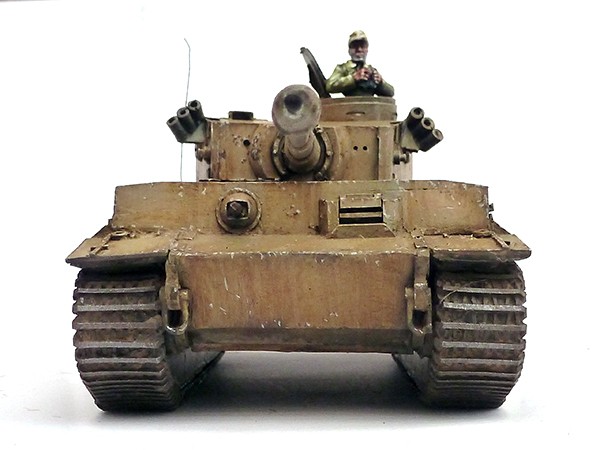 The Tiger tank is probably the most famous tank of all time, and along with its boxy hull and intimidating main gun render it not only instantly recognisable, but also pretty much the standard silhouette of any generic ‘tank’ drawing! Surprisingly, very few Tigers were actually manufactured however, with around 1200-1300 being produced between 1942 and 1944 (compared to around 50,000 Shermans).

Development of the Tiger program was very drawn out and protracted, with an initial request for a heavy tank being submitted prior to the start of hostilities with the initial requirement being for a 30 ton vehicle armed with a 75m main gun armament. However, experiences in France led to a need for heavier armour and armament, and an increase in weight inevitably followed. The new design was to feature 100mm of armour, and an 88mm main gun developed from the proven Flak 36.

Prototypes were created by both Henschel and Porsche (Yes, that Porsche), with Porsche’s design featuring and advanced and complicated electrical drive system, whilst Henschels had a very traditional design and the now familiar over lapping road wheels. Confidence was initially high in the Porsche design, and an order was placed for around 100 of the new tanks. However, persistent design issues as well as a scarcity of the strategically important copper needed for the electrical systems resulted in an eventual favouring of the Henschel design, although design flaws slowed the introduction of the vehicle into service to a crawl. 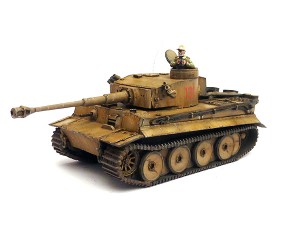 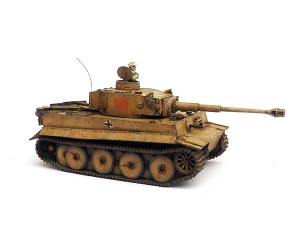 The first 8 pre-production Tigers to leave the production line were sent to Army Group North at the Leningrad sector in Russia and went into action for the first time in September 1942. Initially the vehicle had some substantial teething problems and mechanical reliability was low, however these were ironed out to a moderately satisfactory level by the spring of 1943, and the Tiger was starting to earn itself a reputation as a superb tank.

The combination of fire power and armour, as well as its broad tracks lending it good manoeuvrability in the Russian mud resulted in highly impressive kill to loss ratios, with sources varying from a conservative 10-1 kills to loss ratio, to a huge 19-1 ratio. Initially the Tiger was designed to operate as the spearhead of attacks, using it’s armour and firepower to force an opening in enemy lines, that lighter armour could then exploit, however the changing fortunes of the war resulted instead in the vehicles being held in reserve to act as a fire brigade, and plug gaps where allied breakthrough had occurred. 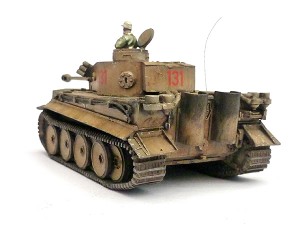 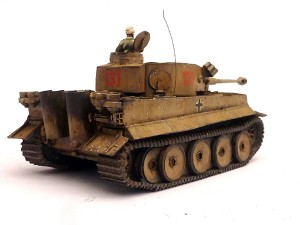 Tigers proved themselves to be extremely potent vehicles even when new and improved allied designs entered the war, and despite production of the Tiger ending in August 1944, Tigers remained in service until 1945. The psychological impact of the vehicle was not to be understated either, with reports and after action accounts mentioning being engaged by Tigers, when in reality none were present in the area, (though this can also be explained to the similarity of the tank with the Panzer IV).

Tigers fought in Russia, Tunisia, the North Western Europe campaign as well as Italian campaigns, and despite being commited in small numbers were often successful in stalling or slowing allied attacks, although they were always too few to really capitalise on their success, with one Tiger costing as much to manufacture as 4 StuG III’s!

Today only a handful of Tiger’s remain preserved in museums and as memorials, and only Tiger 131 at Bovington tank museum in England remains in running condition.

In Bolt Action the Tiger is available at both Regular and Veteran levels, and weighs in at a hefty 395 points. In first edition the tank was a superlative tank killer, however was not great against infantry. With introduction of templates, the Tiger is now quite capable at dealing with blocks of troops too now that it’s super heavy anti-tank gun can now fire a 3” template with +3 pen, allowing it to kill even veteran infantry on 3+. 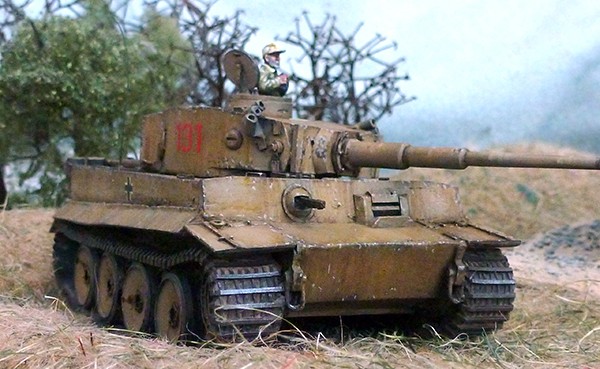 However, armed with a super heavy anti-tank gun the Tiger still really shines as a tank destroyer. Adding +7 to pen rolls means that there’s a good chance to kill anything you fire it at. With armour 10+ the ability to resist return fire is significant too. I’ve had one Tiger destroy 3 enemy vehicles in a single game before…

Whilst effective in regular games, Tank Wars is the best environment for this big cat to shine. I find placing one on the flank in particular to be effective, as the threat it poses is generally enough to channel your opponent away from it and towards your cheaper and more numerous armour, and if you’re particularly lucky might even sneak you a lucky flank shot on something.

I try not to move the Tiger too often, preferring to limit the hit modifiers it receives, however it can make a good spearhead as well forcing your opponent to deal with it if used aggressively. With the added flexibility second edition affords the tank, I plan on using mine far more frequently than I have before too… 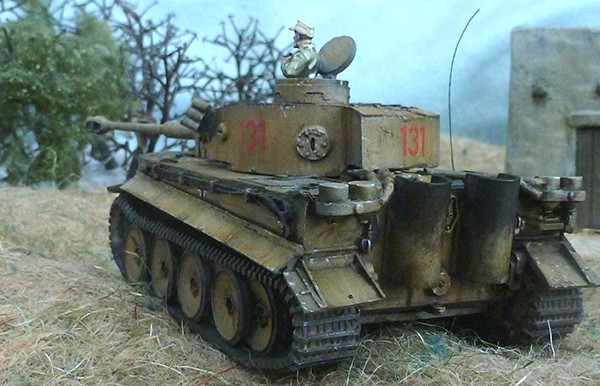 Take care and get painting;) Until next time Andy Singleton VolleyFire Painting 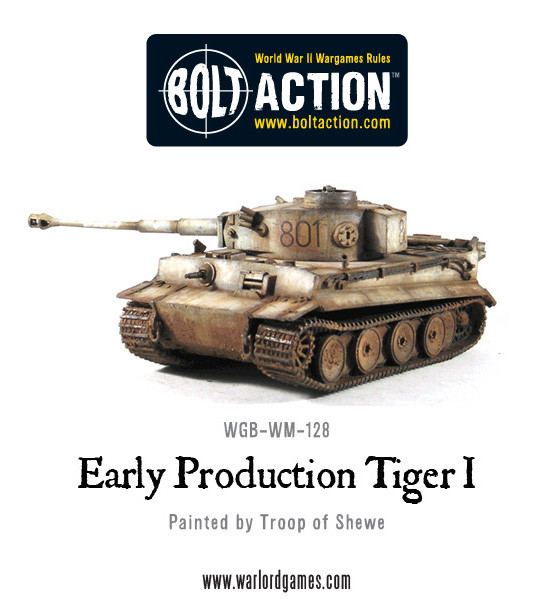 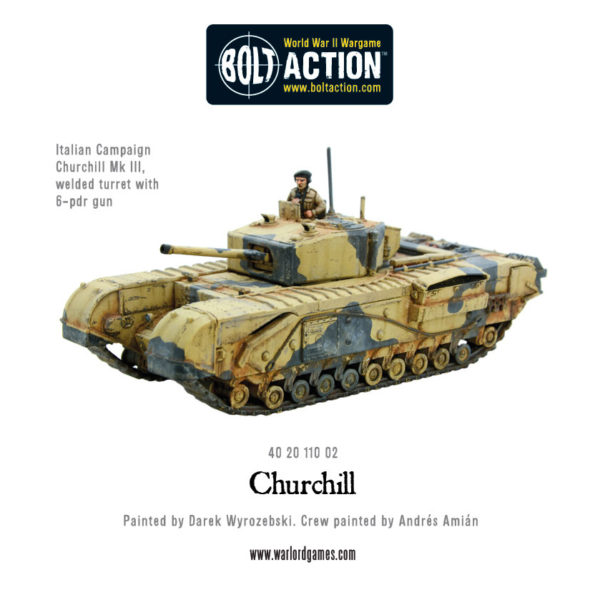