We’re continuing our series exploring some of the lesser known units of the Western Desert theatre. Today, we’re following the 6th Rajputana Rifles on their journey from the deserts of North Africa into the mountains of Eritrea and East Africa. 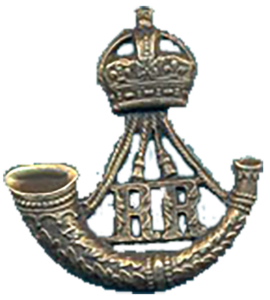 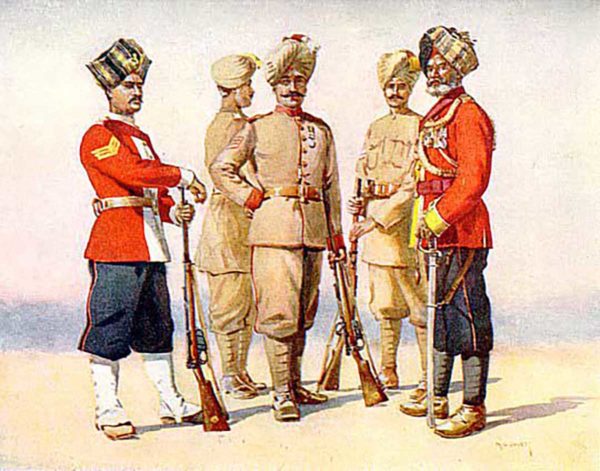 A painting depicting all ranks of the 6th Rajputana Rifles in 1911.

Like many regiments in the Indian army that served with the Commonwealth during the second world war, the 6th Rajputana Rifles have a heritage that stretches back into the colonial era, where the nascent East India Company raised regiments of local sepoys to augment their forces on the sub-continent.

Formed out of six single-battalion regiments in 1922, the component units of the 6th Rajputana Rifles fought numerous actions alongside leading lights of the British Army – Wellesley, Napier and Outram. They’ve fought alongside British regulars in the Indian Mutiny, the 2nd Afghan War and both Western and Middle-Eastern fronts in the first world war.

The senior battalion – formerly the 104th Wellesley’s Rifles, has the distinction of being the oldest rifle regiment in the Indian army, something they conferred onto their parent regiment during the reorganization in 1922.

During the second world war, the 6th Rajputana Rifles would go on to fight across the Middle East, Burma and Malaya, with the 4th battalion earning two Victoria Crosses.

If you’re looking to add a striking and characterful unit to your Commonwealth army, the 6th Rajputana Rifles is a fine candidate for campaigns in the Western Desert and East Africa, along with later campaigns in the Far East. 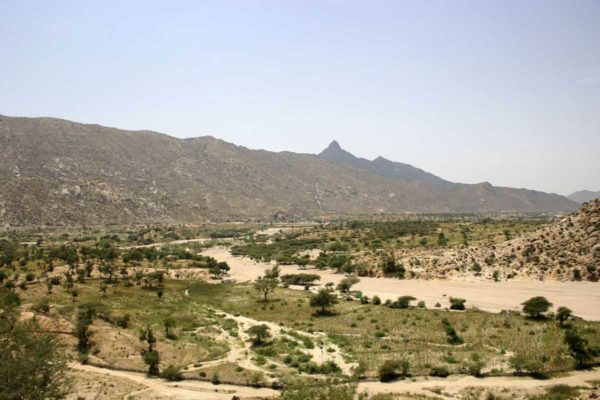 The prelude to the battle of Keren begins some years earlier with the Italian invasion of East Africa in 1935. Striking from their colony of Eritrea, the Italian army invaded neighbouring Ethiopia. After consolidating its colonial possessions into the province of Italian East Africa, the Italian government now possessed a thousand mile border with British possessions in the Sudan, posing a threat to the Suez canal and Allied shipping in the Red Sea.

Things came to a head following the Italian declaration of war in 1940, when Mussolini ordered his troops to capture border towns in Sudan and Kenya. Invading with a force of 6,500 men against a British garrison of 320 men, the Sudanese town of Kasalla was captured with minimal casualties. After capturing a few villages along the Blue Nile, the Italians found themselves short of fuel and promptly halted.

In response, the Commonwealth assembled a five-division force spread out between Sudan and Kenya in the close of 1940. In the early months of 1941, the Sudanese divisions, under the command of Lieutenant-General William Platt launched an attack into Italian occupied Eritrea.

Following a crushing defeat of an Italian blocking force at Agordat, the 4th and 5th Indian Divisions advanced on the Keren massif, overlooking the port town of Massawa on the Eritrean coast.

The terrain in the Keren highlands favoured the defenders in the extreme. Dug in amongst the steep granite ridges, the Italian forces had perfect sightlines for their artillery and plentiful natural cover to protect them from incoming fire. 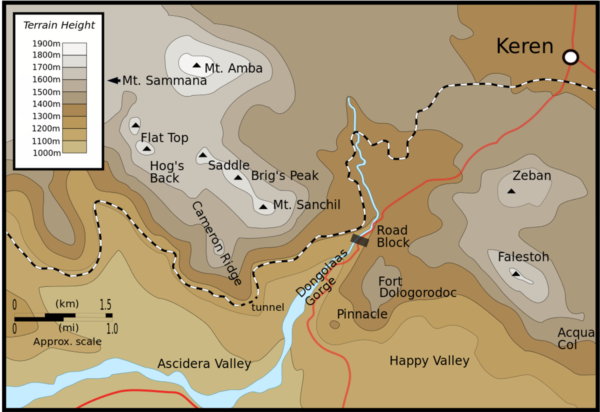 4th Indian Division was charged with attacking up Ascidera valley, along the Cameron ridge towards Mt. Sanchil and Brig’s Peak, while 5th Indian Division charged up Happy valley towards Acqua Col and the fort at Dologorodoc.

The Italian defenders outnumbered the attacking Commonwealth forces almost two to one, and dominated the low ground in the valleys with accurate artillery fire that left the attacking infantry unsupported during the assault.

If the attacking Indians and Highlanders forced an Italian retreat, they would often be left on an exposed hillside, desperately short of ammunition and other provisions. During one attack on the Cameron Ridge, members of the 6th Rajputana Rifles were obliged to haul supplies up 1,500ft of exposed hillside, under constant artillery fire.

Time and again, the Commonwealth forces would gain a position, taking heavy casualties in the process, only to be repulsed by a determined counter-attack by the Italian Bersaglieri. During one of these attacks, Subedar Richhpal Ram was killed by artillery fire on Acqua Col.

Both sides paused to lick their wounds after a bloody start to the battle in early February. During this time, a two battalion force under General Briggs – Briggsforce broke through the Italian lines to the north-east of Keren, threatening the port at Massawa and tying up a significant number of Italian troops.

At the beginning of March, the Commonwealth resumed its assault on Keren, with continued pressure on the high ground around Cameron Ridge and Mt. Sanchil on the left, while a fresh attack was launched against Fort Dologorodoc.

After a hard fight, the fort was reduced and gave the Commonwealth forces a much-needed artillery observation position.

Now able to support their infantry attacks with artillery, the Commonwealth launched an attack up the Dongolaas Gorge, using the railway tunnel under Cameron Ridge to screen the assault.

Despite unparalleled resistance, Indian combat engineers were able to reduce the roadblock while their escorting infantry stormed positions on both sides of the gorge. With the road clear, the Commonwealth forces were able to encircle the Italian positions on the high ground, forcing a withdrawal toward Massawa.

Subedar Richhpal Ram was born in August 1899 in the Indian village of Barda. He enlisted into the 4th Battalion of the 6th Rajputana Rifles on his 21st birthday in 1920. By the outbreak of the second world war, he had risen to the rank of Subedar (equivalent to a captain in the British Army).

He deployed to Eritrea as part of the 4th Indian Infantry Division, fighting alongside the 6th Rajputana Rifles until the battle of Keren, where he was killed in action and earned his posthumous Victoria Cross.

The KING has been graciously pleased to approve of the posthumous award of the Victoria Cross to the undermentioned: —
Subadar Richpal Ram, 6th Rajputana Rifles, Indian Army.During the assault on enemy positions in front of Keren, Eritrea, on the night of 7-8th February, 1941, Subadar Richpal Ram, who was second-in-command of a leading company, insisted on accompanying the forward platoon and led its attack on the first objective with great dash and gallantry. His company commander being then wounded, he assumed command of the company, and led the attack of the remaining two platoons to the final objective.In face of heavy fire, some thirty men with this officer at their head rushed the objective with the bayonet and captured it. The party was completely isolated, but under the inspiring leadership of Subadar Richpal Ram, it beat back six enemy counter-attacks between midnight and 0430 hours. By now, ammunition had run out, and this officer extricated his command and fought his way back to his battalion with a handful of survivors through the surrounding enemy.Again, in the attack on the same position on 12th February, this officer led the attack of his company. He pressed on fearlessly and determinedly in the face of heavy and accurate fire, and by his personal example inspired his company with his resolute spirit until his right foot was blown off. He then suffered further wounds from which he died. While lying wounded he continued to wave his men on, and his final words were ” We’ll capture the objective “.The heroism, determination and devotion to duty shown by this officer were beyond praise, and provided an inspiration to all who saw him.

I have chosen to recreate Richhpal Ram’s heroic assault on Acqua Col. Like last week, I’ve used the Commonwealth Infantry Brigade force selector in the new Western Desert Campaign book. What it lacks in mobility it makes up in raw firepower, with two light howitzers and an artillery observer to keep the enemy suppressed while the infantry charge in. 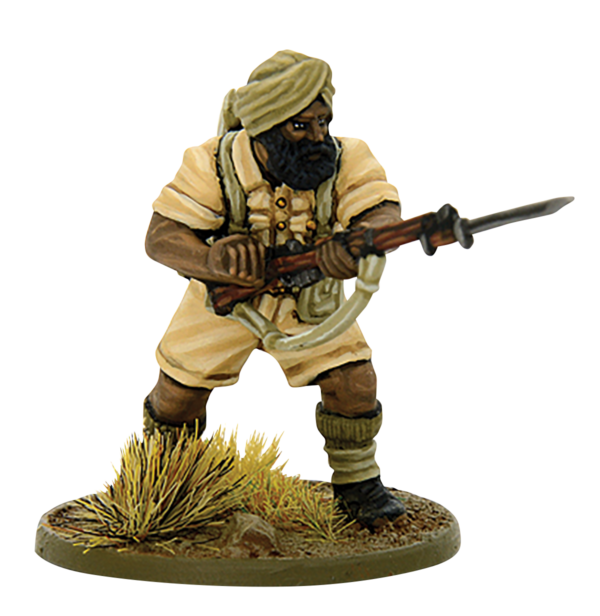 A Sikh private painted by our fantastic studio team.

If you’ve been inspired to recreate the 6th Rajputana Rifles, you can find all the bits you need in our webstore! 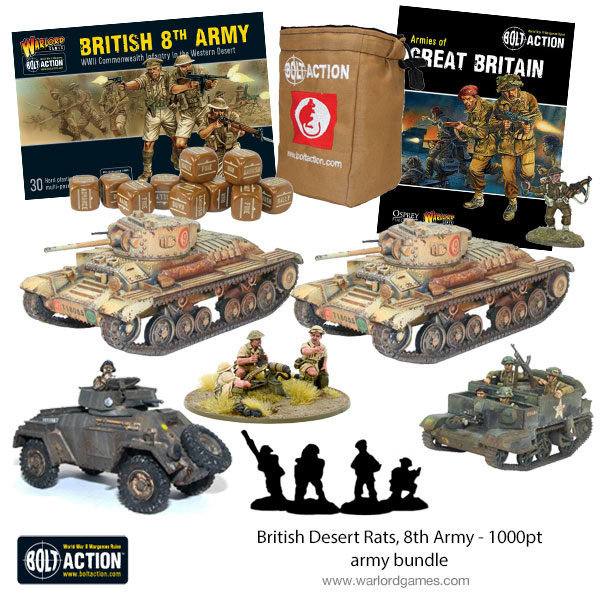 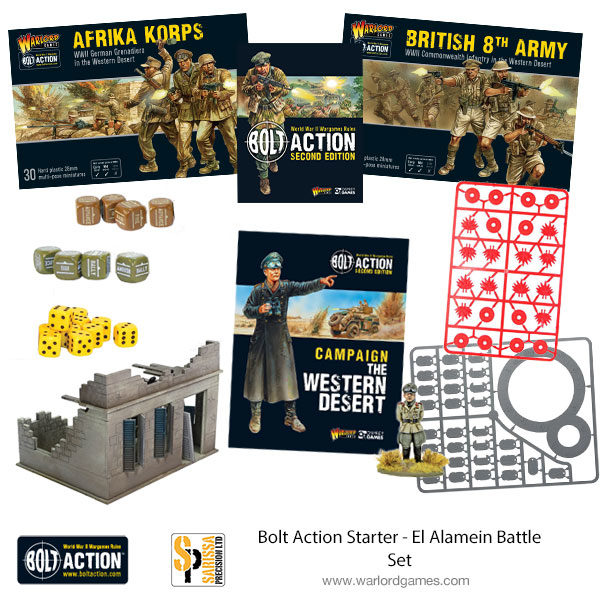 Tom spends most of his time buying books and painting miniatures. He enjoys putting animals on the bases of his miniatures and half-finishing side projects. Some say that he lives in a tower on top of some windswept northern hill with his wife and cow-patterned cat, Spaghetti.
View Profile | View all posts by Tom Mecredy
Frontline Report: Kalon’s D-Day Assault Force
Announcement: Black Powder Bundles