A race long thought extinct now reveals itself! The Askar – Mercenary Warriors, psychologically and physically specialised as fighters, now enter the Antarean arena as mercenaries for (almost) any force! 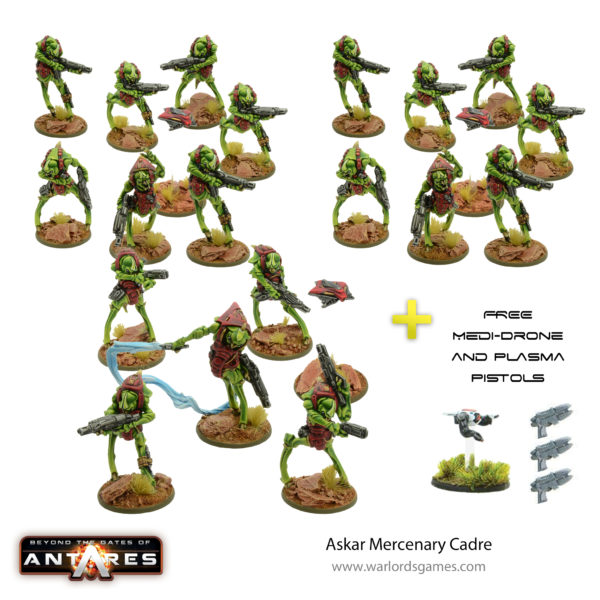 Who are the Askar? 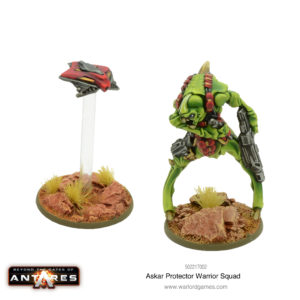 The Askar of ancient times lived in hive-like cities called congregates with a number of sister-hives forming a Congregation: the closest thing among the Askar to a nation or planetary state.

Although the Askar were then divided over many thousands of worlds, they retained a sense of universal identity which they called the Congregation of Askar.

It is not known whether the Askars of today derive from a number of worlds – and hence a number of distinct Congregations – or a single planet. Either way, this does not stop bands of Askar taking opposing sides when employed to do so; certain bands are known to be close and even bitter rivals.

The Askar are powerfully built creatures with tough exoskeletons and segmented bodies much like other arthropoid races. Their claw-like hands are capable of close and delicate manipulation but are also incredibly strong, able to crush even stone and metal. Their reactions exceed normal human parameters by quite a margin resulting in a deadly foe

The mercenary bands are led by a warrior chosen amongst them, who will generally speak for the whole band, taking such decisions as are necessary in the band’s dealing with other races. 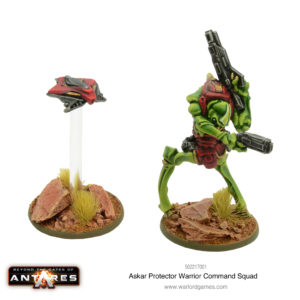 Askar bands have few needs or ambitions beyond fighting, but when it comes to weaponry and armaments they have an eye for both quality and ‘show’.
Bands working within the Freeborn mercenary procurement network tend to be armed in a similar style.
Their preferred armament of choice is the Compression Carbine – a high-status weapon that is favoured by many independent, freebooter and private forces in Antarean space. The weapon’s ability to punch through cover is its chief advantage and the distinctive noise and visible ripple of its compression field are instantly recognisable, enough to strike terror into any hapless enemy – no doubt part of its appeal. 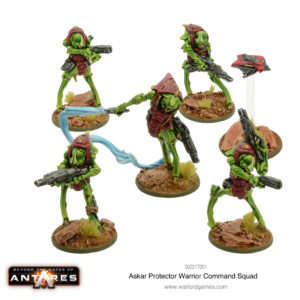 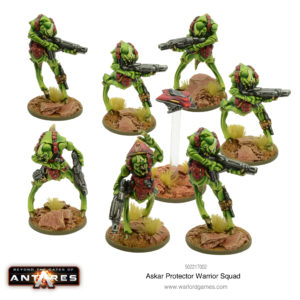 Compression weaponry doesn’t function at very close ranges, which means that troops carrying them augment their armament with a variety of pistols or similar close-fighting weapons. The most popular of these is the maglash, with its crackling energy and range, or the X-sling supplemented by SlingNet or Overload ammunition. A mag pistol is also very popular, with the more deadly plasma pistols on command squads.

Protection is afforded by means of standard reflex armour, which combined with a naturally tough exoskeleton enables an Askar warrior to stand toe-to-tarsular claw with practically any opponent.

Askar Protector-Warriors in games of Antares

Tough and independent, these warriors can fight alongside or against almost any race! Each model is beautifully and dynamically sculpted with a mag lash strapped to their equipment belt along with a pistol.

Do you have an article within you? Are you itching to show your collection to the world? Join our Beyond the gates of Antares facebook page, or peruse the Antarean Nexus, for the most up to date news and more!