Daz Evans has produced a very different and unique Bolt Action army. We’ll let him explain all, aided and abetted by photos of said army by Gabrio Tolentino… 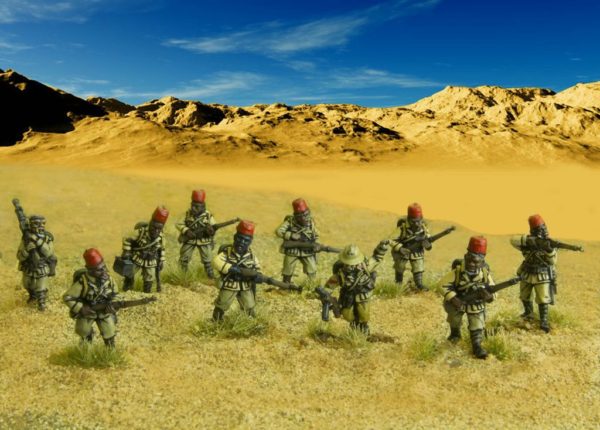 Daz: Why Italians you ask? Take a knee and I’ll tell you….

Yep, nothing more, nothing less. However that one single act (or lack of) has led to quite the renaissance in my hobby life. It must have been, oh, six months, with some change, when I got the e-mail from friends raving about this little company called ‘Warlord’ and their range of WWII goodies and some rule set or other called ‘Bolt Action’, soon to be released. Like any good friend I nodded and thought, “ah nice”, marked it as unread and cracked on with “stuff”. Meanwhile I had several replies, declaring allegiances to the nations of the world, flowing back and forth, debates on tactical flow, uniform style and the like graced my inbox until the moment arrived – “you are going to get a force, aren’t you Daz?”…. 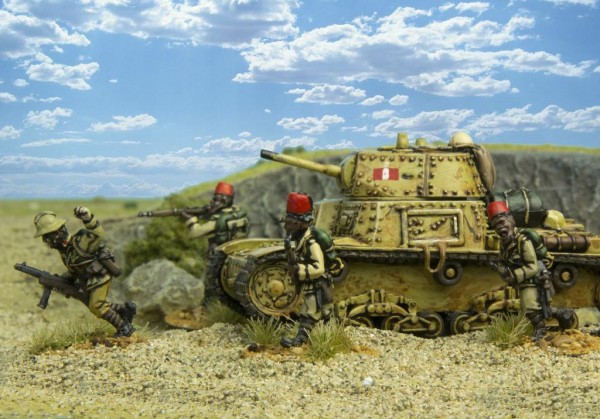 “Ummm, yes…..”. I then sat and looked at what was currently on my desk (a broken Roman chariot – long story), thumbed through a few Osprey books and I had a ‘eureka’ moment – “Italians”. That promoted a few days of silence on the e-mail front. Now, we all know some potted history of the Italian contribution to the War, most of it, much like my school reports – enthusiastic, but…

A week of Googling followed and… 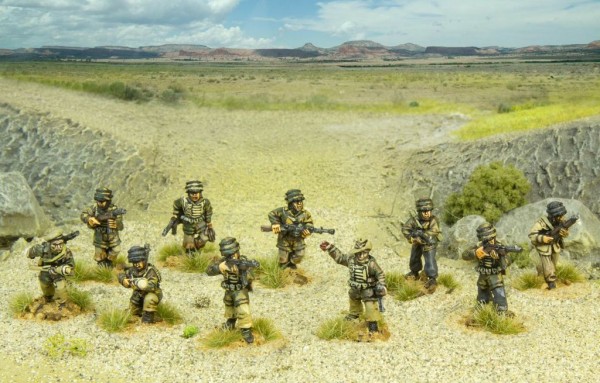 I hit the ‘Warlord’ webstore and bought the paints and a 1,000 point Italian Paratrooper force, that was painted up for the European theatre and played a few games (though I won more than I lost!). All the while thinking, “hmmm, there are no conversions”. After getting over the slight feeling of desecration at destroying some fantastically sculpted models, I took my scalpel to them; but first, what the Dickens was I going to convert the great, great grandsons of Caesar into? Many moons ago a friend and I did some colonial warfare stuff based around the Boxer Rebellion and that little light bulb clicked on – “Colonials – Italians colonials! BAM!” 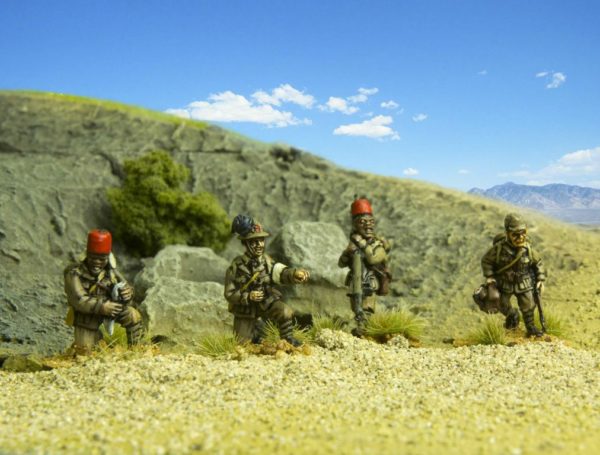 So the concept for the Somalis Askari under De Bono was born.

So the basic concept (at the moment reinforced by the brave boys of the Italian paratrooper corps – just for the moment) begins the force for the second Italio-Abyssinian war.

The first step was to identify the uniforms (harder than I thought) and find the models. 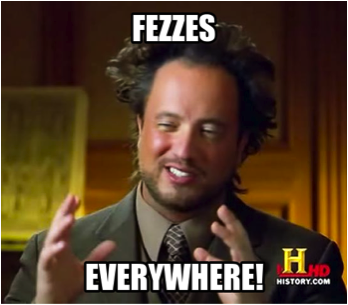 First I had a go with simply attaching the fez of SS Handschar heads on an Italian rifleman body, it worked (sort of, but after painting it looked wrong, the face was too, well, European). So back to the Warlord website – Zulus; there is a fantastic range of Anglo-Zulu war figures both in metal from Empress Miniatures and Warlord’s very own plastic. Looking through the ranges I spotted the Married Zulu heads. What was nice was that all eight heads have a headband type thing which gives a nice cutting guide. When coupled with the cut off point of the Handschar fez we have two nice joining points and after a bit of glue and prayer to the hobby gods, I got eight heads! I promptly popped them onto the rifleman and Solothurn crew I had spare (after some Bersaglieri conversions involving Belgian Adrien helmets with Caesarean helmet plumes) and started painting. 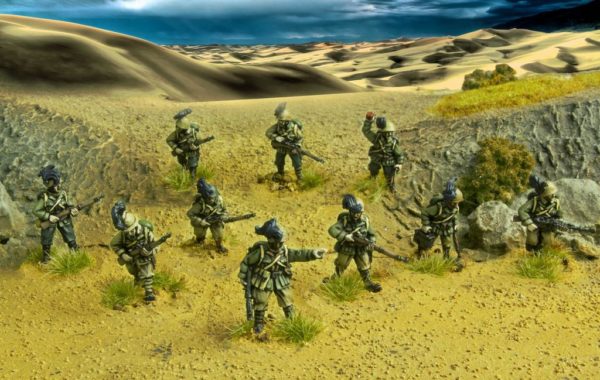 For the Askari skin I started (like all my painting) with a black spray undercoat and after drying, a second layer of dark brown normally a Vallejo Flat brown, trying to keep line weight value of the black) and a Citadel Flesh Wash to add the shadow values.

The tunics are based with German Camouflage Beige with a little Leather Brown to darken 2:1 ratio. The flesh is then picked out with Flat Brown and a touch of Iraqi Sand, just keep adding the sand to work up the highlight. 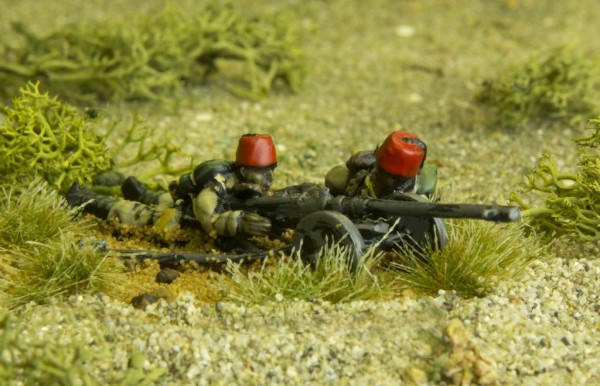 The uniforms are highlighted up with a mix of Flat Brown+ German Camouflage Beige + Middlestone in the ratio of 2:3:1 adding more Middlestone to highlight (being careful to keep the crisp outlines of the black and brown).

The desert paratrooper camouflage is a base of German camouflage beige highlighted up, and the splatters are Flat Brown and Military Green, the infantry packs are German Field Green with the pouches a mix of Camouflage Orange Ochre and Highlight British Tanker, with final colours to be added being the reds for the fezzes and there we go. 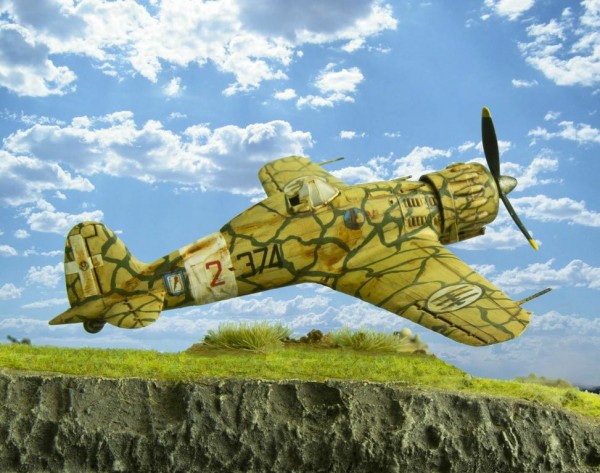 So far, with the addition of the Macchi C200 fighter, I have over two thousand points, not all shown here (yet!) and with the ever expanding resin range (I’m currently painting up a pair of AB41s alongside some more Askari).

My next project is a five tank M13/40 squadron!