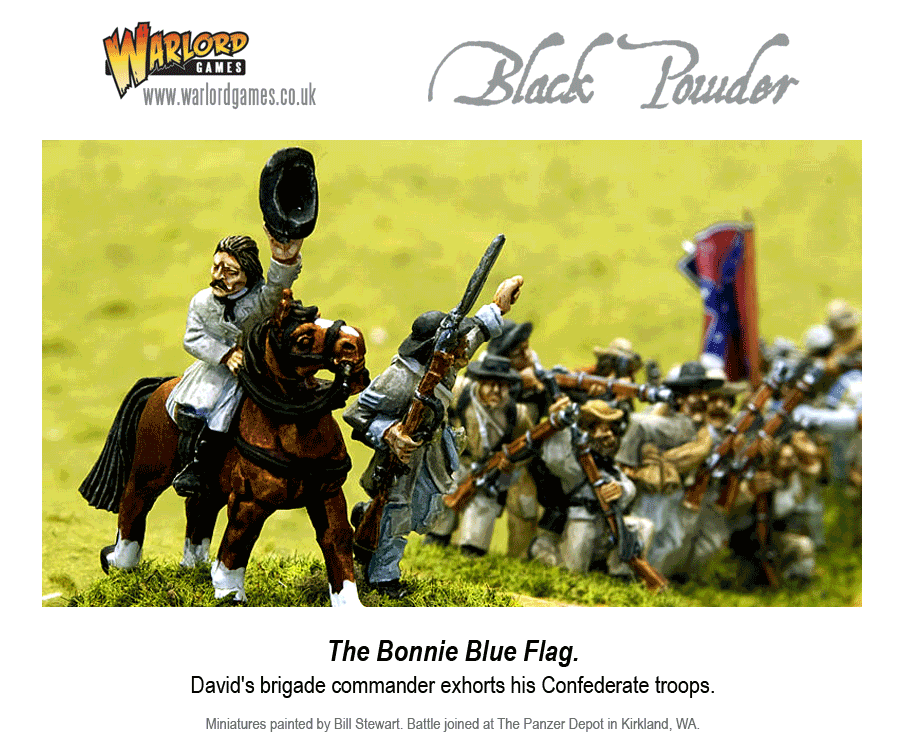 This was to be my inaugural game of Black Powder and was fought out at The Panzer Depot store in Kirkland, Washington. We played a version of the “Fighting retreat at El Perez” scenario from the rulebook which we modified for the American Civil War. The town of El Perez was instead a piney forest, the French forces were Union infantry, and the retreating British were Confederate infantry.

Confederates were myself, John Kennedy, and Rich Knapton. Union were Steve Puffenberger, Bob Mackler, Brett Hendrickson, and Bill Stewart. All the beautifully painted figures and terrain were provided by Bill. He and Bob were going to set up early, except that Bob had a perfect odyssey getting from Tukwila to Kirkland that involved highway closures, crowded alternate routes choked by road incidents, the trial of securing a Dick’s Deluxe in the midst of the Wallingford street fair, etc. Not that set-up was a huge undertaking – I watched and kibitzed as Bill set up and can say that for me the experience was fairly effortless! 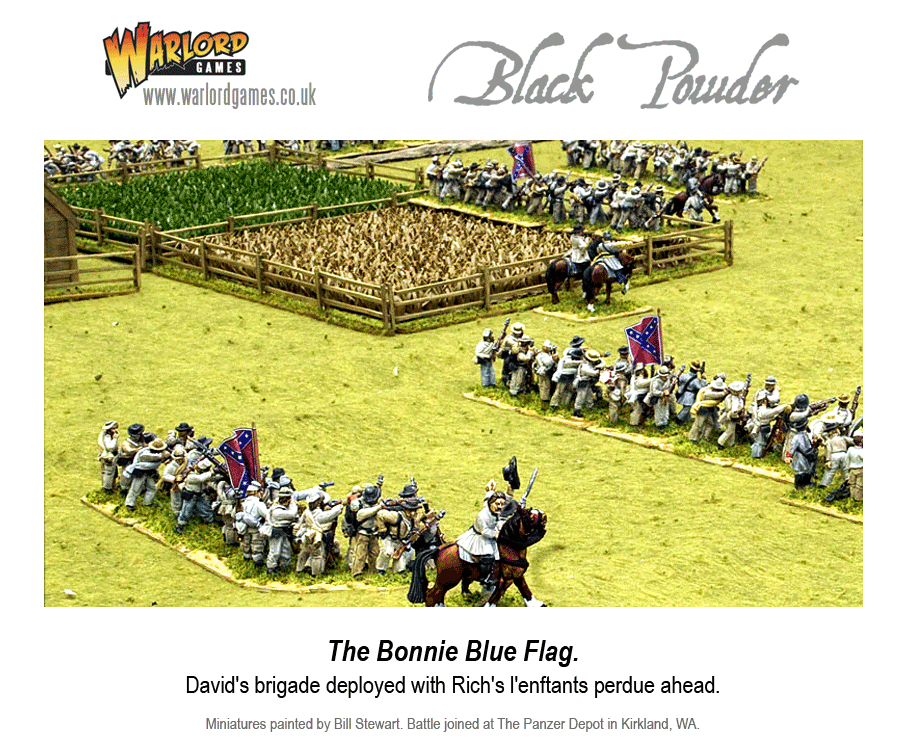 John’s brigade had the task of chasing the small Union garrison out of a wee hamlet on the other side of a bridge. To accomplish this, he had three infantry regiments and a battery of guns. Bill, commanding the garrison, had a single small unit.

The orders from Rich and myself were to withdraw towards the town and get our troops across the bridge. Getting our force across the bridge and off the board were our victory conditions for the game. John was overall commander and gave Rich and I explicit orders, apparently. Of course, being impetuous by nature, our troops saw the bluebellies come on, sang a few verses of The Bonnie Blue Flag, and pitched into the fight. From there, things went pear-shaped fast.

Bob, playing the role of a Buckeye pol looking for enough glory to propel him to a senate seat in the next elections, came on the board in column of attack heading straight for Rich’s position in the center of the board. Rich, not wanting to wait for it, lead his troops out against Bob only to find his troops exposed. His lead regiment suffered a flank attack and got beat up. 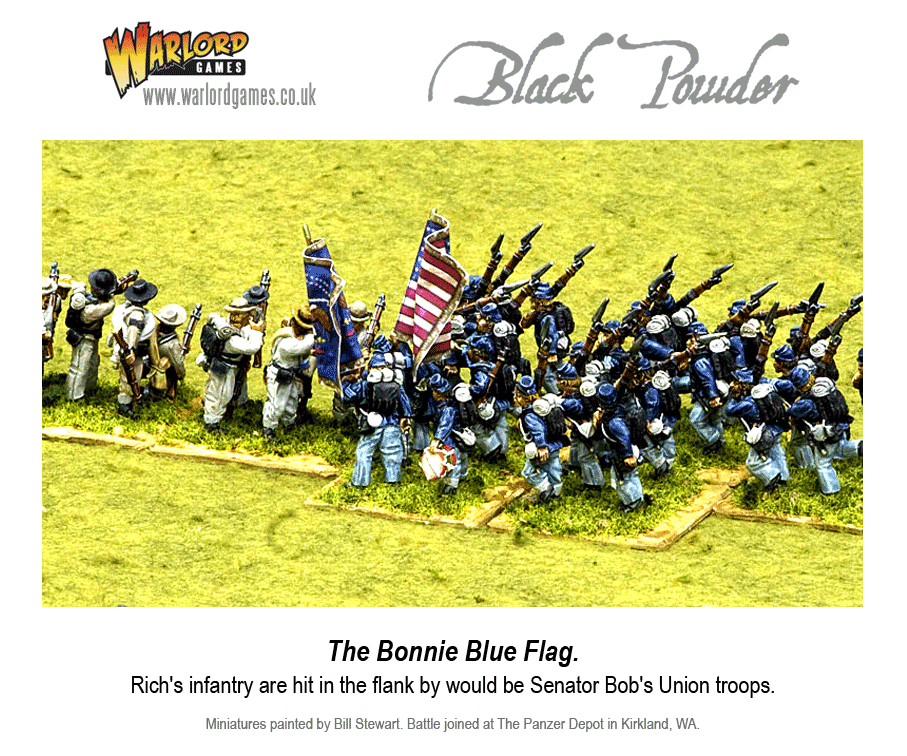 It held on a bit longer, but eventually became shaken by losses and failed a break test that had it routing from the field. Rich’s remaining units continued to fight on against Bob’s attack, but were outnumbered and fighting for life. 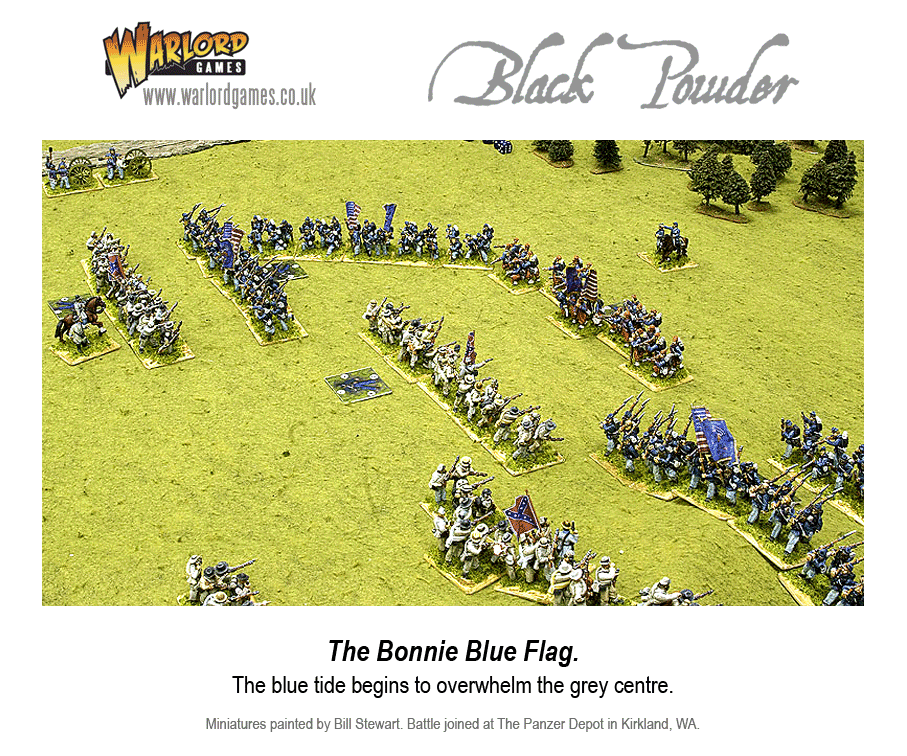 In support of Rich’s attack, I moved up my line against Steve’s advancing Yankee aggressors. The result was several turns of exchanging shots at short range. Eventually I lost my guns due to a failed break test and took the opportunity to fall back and reform my line and continue to engage Steve’s (and Bob’s) troops with long-range fire. 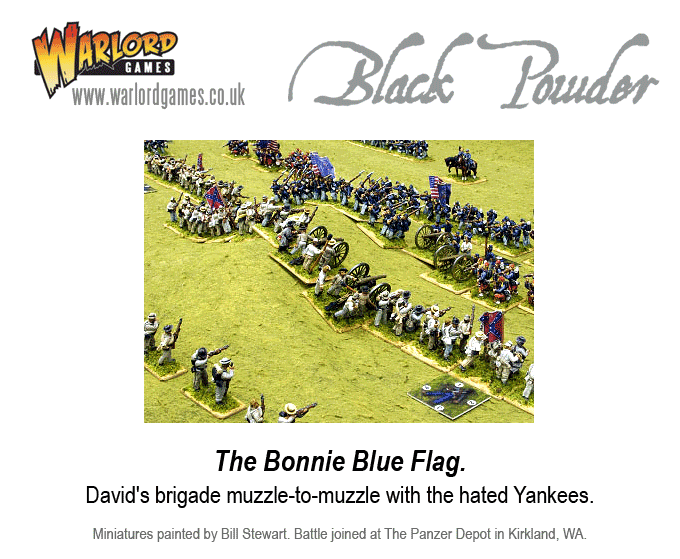 This brilliant tactical manoeuvre had the down side of leaving Rich entirely unsupported in an advanced position, but some things can’t be helped. Beset 2:1 in hand-to-hand combat and pummeled by flanking artillery fire, Rich’s lone remaining unit succumbed, which was all to the good as far as Rich was concerned since it was past lunch time and he was peckish. 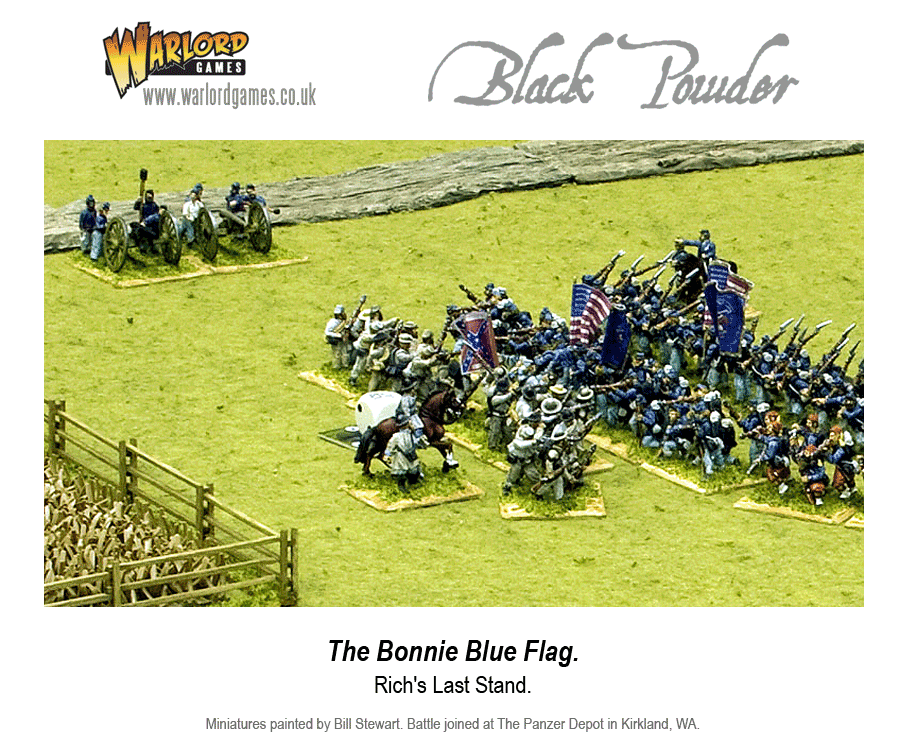 John, bemoaning our insubordination, carried on with his task of brushing away the token garrison that blocked our retreat. This proved a more difficult undertaking than at first apparent. Beset by shot, shell, grape, and Minie-balls, Bill’s skeleton force hung on grimly and beat the odds for multiple break tests, meanwhile giving out better than it took. 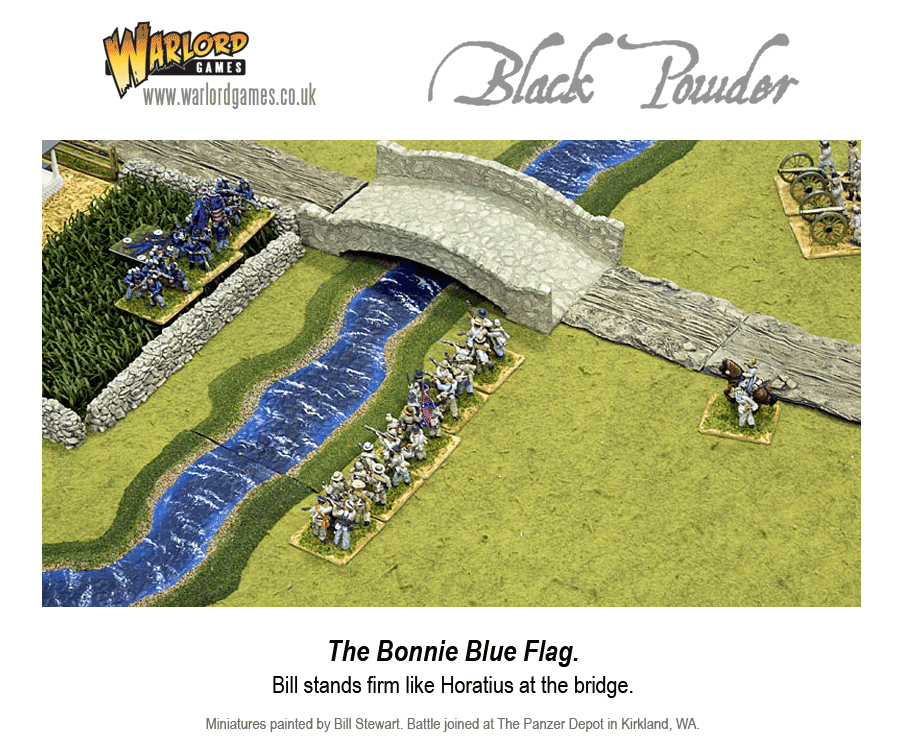 As John beat his head against Bill’s dogged defense, Brett advanced his brigade up the road to force John to turn and make a rear-guard stand. This forced John to form a shaken line of two regiments against Brett, who eventually wore him down. Meanwhile, John lost the infantry unit attacking Bill to a failed break test. The Confederate escape route was still closed. 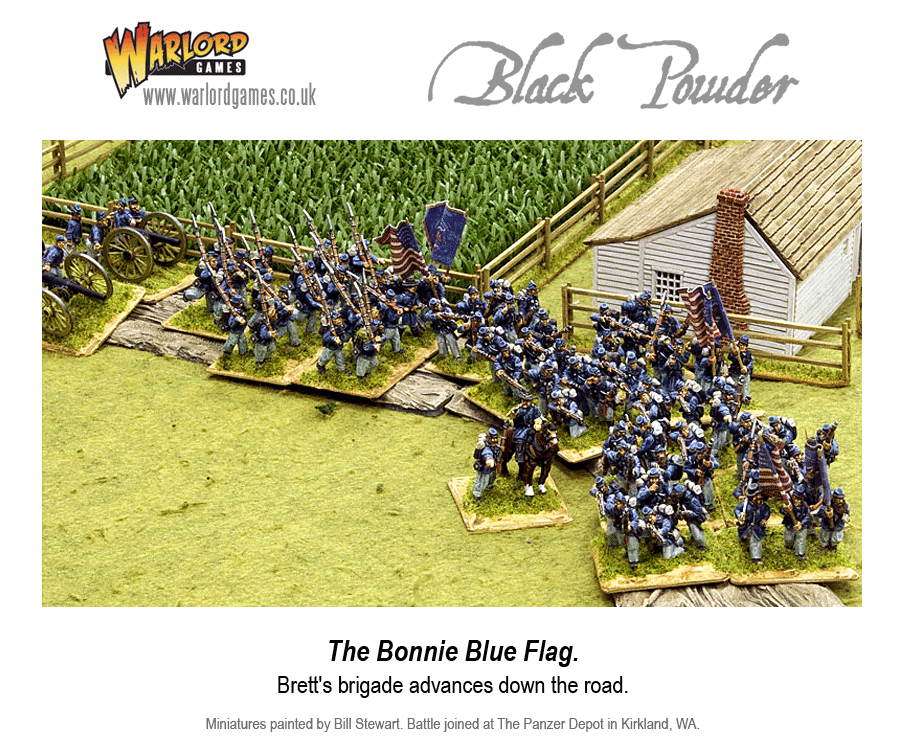 With only his shaken guns facing Bill’s garrison, John rolled lucky boxcars on shooting and Bill’s garrison, after many tums of holding firm, finally dispersed due to a failed break test. The escape rout was now open, but there were many fewer Confederates left to take it.

I tried moving my brigade back and towards the bridge on successive turns, but Steve was close on my retreat. I lost my unit of sharpshooters and was left with only my three infantry regiments. John’s two shaken regiments facing Brett finally broke and dispersed. All that was left on the field were my three regiments, who were looking like they were about to be cut off. That was that for the game. 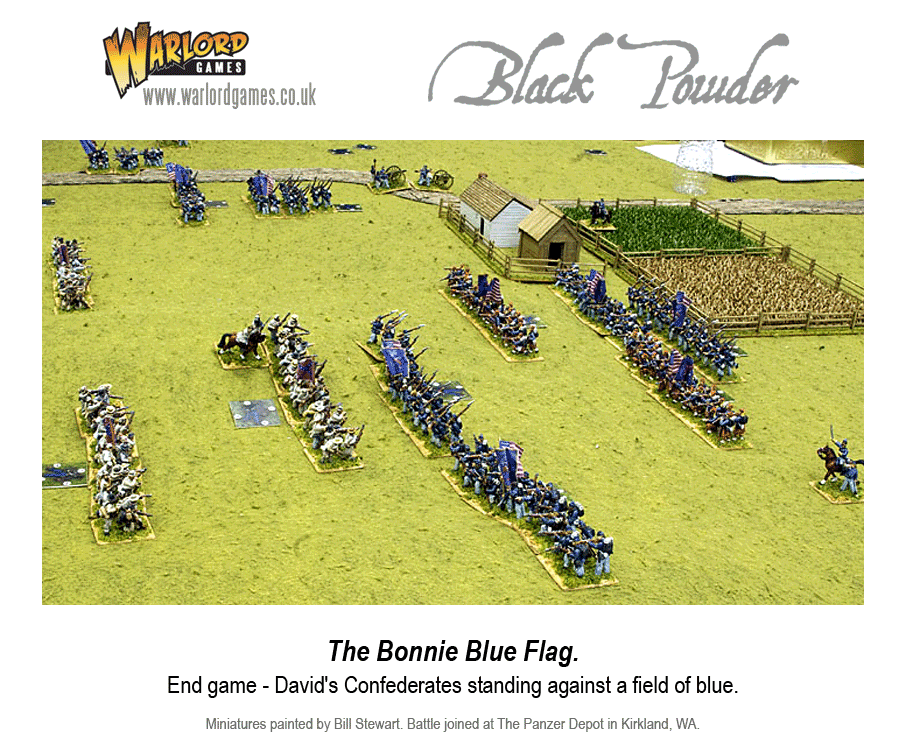 Thus ended my first game with the rules and I liked Black Powder. The mechanisms are simple and certainly don’t provide a simulation of 18th-19th century warfare, but they play very well. I have always thought that success in a game depends on its ability to abstract enough of the detail so as to not bog down play, but without sacrificing a feel for the period. The Black Powder rules are very open to being modified ad-hoc to represent a particular area.

I like the command rules and the means of indicating unit status that obviates removing figures or stands. The rules themselves are well produced, entertaining, and well written.

Another perspective is that while the rules, which cover warfare from matchlock smoothbore muskets to the era of bolt-action rifles, represent changes in firepower by changes in the range, but not in changes in firepower. They remind me a lot of a set of locally-produced rules called Brigadier! that I played in my youth. Like Black Powder, Brigadier! was suitable for games from 1700 to 1914. However, firepower was modeled much differently and the punch from a unit of rifled muskets was much different than what a unit of flintlock muskets could produce. The changes in firepower had the effect of modifying the tactics you used in the game. I suspect that Black Powder will play for 1914 much like it will play for 1758, except for longer ranges. But that remains to be seen. I think the machine-gun rules will be a significant difference…