The German forces under the command of kommandant Bernard Lewis have been running amok – with three games under their belt, it was time to throw something of a ‘speedbump’ in their direction – enter the equally Teutonic force of Richard Dando!

The chaps took up position in the Mail Order warehouse… a grass mat was laid-out among the tape dispensers, postage labels and boxes – with a smattering of terrain, the warehouse was transformed into a battleground! 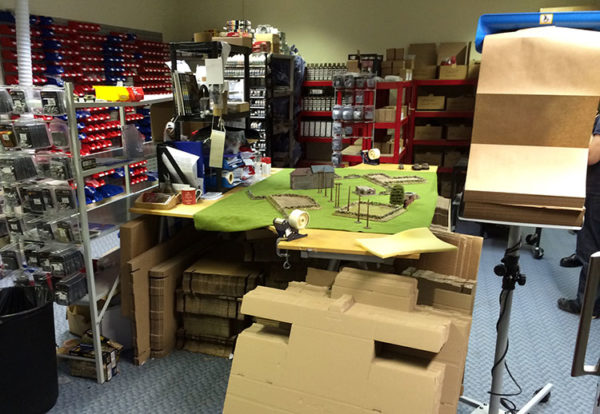 Richard has enlisted a Jagdpanzer IV (L48) as his command tank, accompanied by a pair of Jagpanzer IV (L70)s, for a whopping 821 points (someone didn’t read the rules about 400-500 point starting force!)

Bernard’s force consisted of an Sd.Kfz 222 command vehicle with the Strict Discipline skill, a Panzer III Ausf J( P3) with no skills, as the gunner was killed in the last game – and finally a Flammpanzer III (FP3), which at the moment has the skills Hair Trigger and Adrenalin Rush, making it the first regular tank in the campaign. The force total comes to 432 points

We started by determining the number of objectives we’d be fighting over – and we got six! Rich won the dice roll and chose the side he wished to start on.

The first dice from the bag was German (surprise, surprise…). a Grey dice, meaning that Rich got the first action – and the first Jagdpanzer L70 advanced onto the board, taking cover behind the house.

It was closely followed by the second L70, which moved up behind the wall, getting a good field of vision across the whole centre of the board.

Bernard got the next dice – and the Sd.Kfz 222 advanced onto the board, taking a shot at the second L70 – the opening shot of the game missed its target, slamming into the walls, sending chunks of masonry flying.

Rich’s final tank – the Jagdpanzer L48 trundled onto the board and returned fire at the 222 – the shot whistled right across the centre of the table toward the armoured car, but fortunately for the crewmen inside, it missed. The Jagdpanzer’s commander could be heard cursing his gunner, who feverishly re-calibrated his sights, with hopes of a little more luck next turn.

Bernard’s Panzer III advances on to the board, firing upon the L48 – the shot hits its mark, and a loud ‘CRACK!’ rings out across the battlefield – though no damage is done – the thick, sloped armour of the Jagdpanzer will take more than that to penetrate.

The Flammpanzer completes the turn – advancing onto the board, taking position behind a wall, hidden from enemy view by the bunker in front of it. 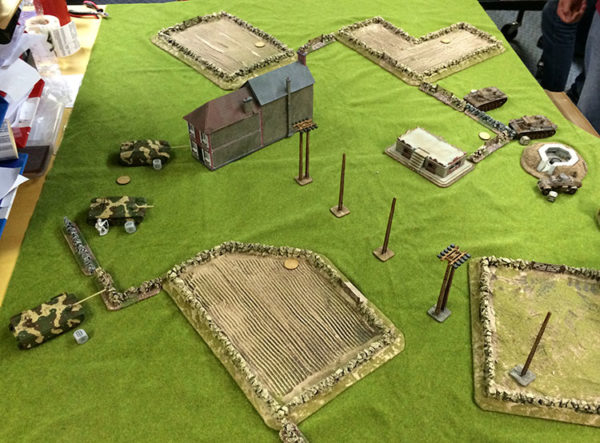 The Panzer III opens the second game turn by firing upon the L48 – the shot whistles over the low-profile tank hunter and attracts the attention of the crewmen inside. They set their sights on the Panzer – Richard passes a morale test, the gunner readies a High Explosive round. The commander screams ‘FEUER!’ and the Panzer explodes into a plume of flame. Fortunately for Bernard, the crew manage to bundle out of the escape hatches to fight another day…

The destruction of the Panzer III triggers a chain of action – the Sd.Kfz 222 advances and fires upon the L48, but misses. In return, the second L70 fires upon the Sd.Kfz 222 – which takes a Recce Move away, ducking out of the line of fire. Richard tries to take advantage of the fact that the 222 has taken it’s Recce move, and fire upon it again with the first L70 – but the shot misses.

The Flammpanzer advances and fires upon the first L70, though the Flammpanzer cannot penetrate the target’s armour, it would still be able to inflict Pin Markers and force a Morale Check to make the enemy vehicle run away…

Rich passes the morale check – so Bernard uses his ‘Adrenalin Rush’ skill to fire the flamethrower again at the same target. Again, Rich passes his morale check – and the (very lucky!) crewmen inside the Jagdpanzer set their sights on tackling the flame-belching beast next turn. 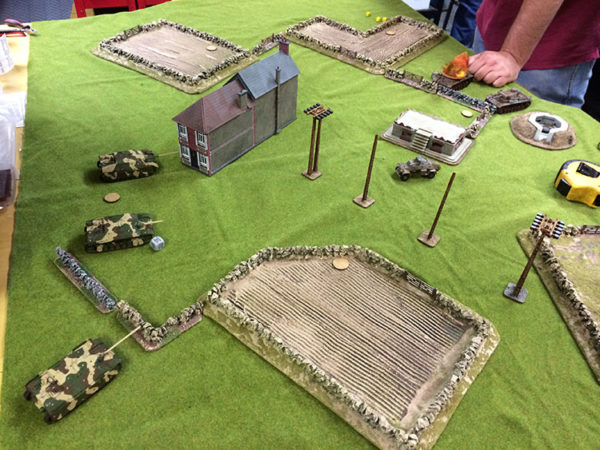 Turn three begins with the Flammpanzer again spouting a jet of flame upon the first L70. This time, Rich fails the morale check – the crew scramble out of their vehicle, as their luck has wained and the tank is destroyed in a fiery haze.

The Sd.Kfz 222 advances and opens fire on the L48 – attracting the attention of both of Rich’s remaining tanks. Both bring their sights to bear upon the armoured car but both shots miss – the crewmen visibly shaken by the firepower displayed by the Flammpanzer. 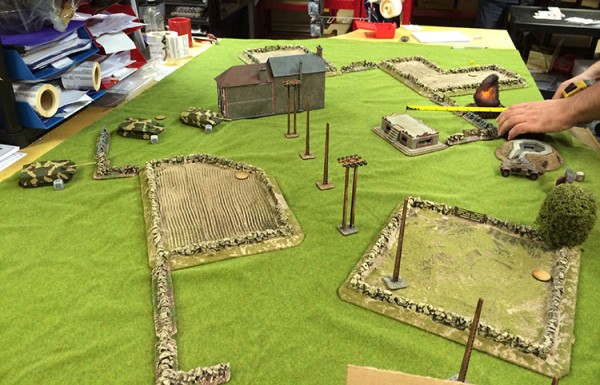 The Sd.Kfz 222 advances up the board and fires on the L48 – they exchange fire, with the second L70 also joining-in. The Jagdpanzers unsurprisingly come out on-top – the Armoured Car is hit and the crew are stunned.

The Flammpanzer advances once more, and launches a gout of flame at the L48, but once more Rich passes a flame-enduced morale check

By Turn Five, Rich has seen the power and the potency of Bernad’s flame tank – the first L70 opens fire and inflicts a superficial hit, immobilizing the flame tank and forcing it to go Down.

The Sd.Kfz 222 commander uses his ‘Strict Discipline’ skill to remove all pin markers on his vehicle – and then advances to fire upon the L48. The Command Tank retaliates by opening fire upon the Flammpanzer. 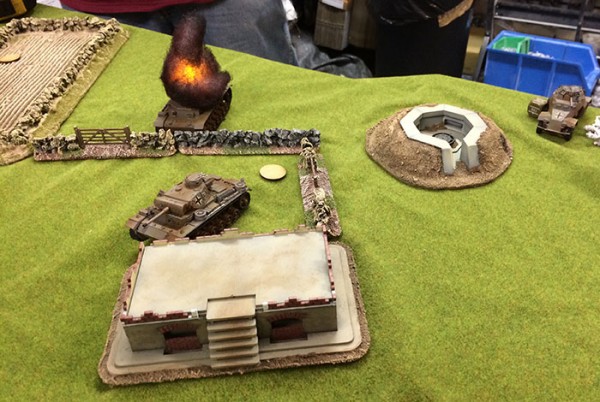 The L48 passes it’s morale check and fires on the Flammpanzer – Rich is determined to get revenge and destroy it! The Flammpanzer returns fire and the two are locked in a duel for the turn – with neither tank sustaining significant damage.

The Sd.Kfz 222 and second L70 try to help – the 222 fires upon the L48, but the shots bounce-off of the Jagdpanzer’s armour, while a shell from the L70’s Pak42 main gun pummels the flame tank. The crewmen inside are rattled, but continue to fight on.

The second L70 sends another shell into the side of the Flammpanzer – the shot passes through the armour with ease, causing a chain reaction which ignites the tank into a ball of flame. One crewman is killed, and everyone in the room gathers round, hoping that the Gunner is killed (the gunner has amassed a number of kills, and is quickly becoming the bane of the Warlord staff!). Bernard makes the roll…

..and the Flammpanzers driver is killed (Boo!).

With just the Sd.Kfz 222 Command vehicle remaining, Rich has his sights set on wiping-out the enemy entirely. The L48 takes aim…

JPL-3 fires on 222 and misses. The 222 advances to the flank of JPL-3 and fires its light autocannon at point blank range but fails to hit.

Rich rolls to see if there will be an 8th turn, but the game ends straight away. 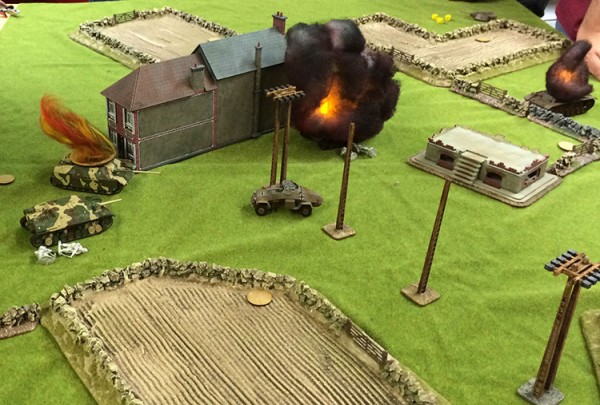 The game finished in a draw – the Sd.Kfz 222 was close enough to contest the objective marker which Rich had claimed. With a shake of hands, Bernard and Richard vowed to join-sides for a larger battle against the Allies…

All Rich’s tank crews gain 20xp for surviving, the second Jagdpanzer L70 gets an extra 17xp for destroying the Flammpanzer and the Command L48 gains an extra 15xp for the destruction of the Panzer III Ausf J.

Bernard’s Sd.Kfz 222 and surviving Panzer III Ausf J crew earn 20 xp each which puts them both up to 45xp each. The Flammpanzer III crew earn 20xp for surving the game but also 29xp feom the destroyed tank. This gives them 58 points – meaning that they’ve acquired another skill! – Bernard rolled and received another gunner skill – ‘Long Shot’ which gives Bernard a double-distance Flamethrower shot – nasty!

At the end of this game as his platoon commander was still alive, Bernard upgraded him – giving him a tank for him and his crew – a nice new Panzer III Ausf J. His wounds were fully healed, and he was heading back into the front lines.