This week, we have discovered an imposter! A scout has infiltrated the Warlord warehouse – long-time friend of Warlord, Dave Warrilow has arrived armed with a troop of T-34s. The fate of Warlord hangs in the balance, and our man Bernard Lewis and his Germans are our final line of defence… 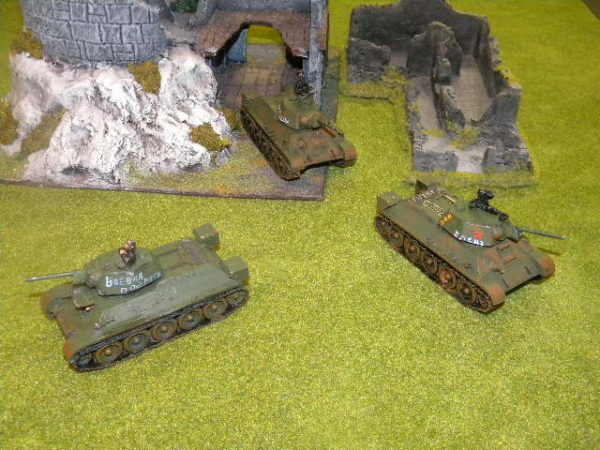 Dave: The T-34/76 – what more can I say? Being classed as a medium tank makes it so much more manoeuvrable on the battlefield – and excellent for supporting infantry in close support with its 2 MMGs and 76mm main gun. This tank wreaked both fear and havoc to the Wehrmacht forces after the battle of Stalingrad. And once the T-34/85 was introduced the 85mm gun gave this tank the punch it really needed. The T-34 was used all the way up to the late 1990s, and was the blue print of the modern main battle tanks up to the present day.

My starting force is as follows:

Who is my Commander? I have chosen a famous tank driver for my Command tank.

Mariya Vasilyevna Oktyabrskaya….. Боевая подруга (‘The Fighting Girlfriend.’) Mariya was the wife of a Soviet officer in the Red Army, a stout communist and a political activist for the Soviet cause. But during the German attack on the Ukrainian city of Kiev her beloved husband was killed. What made matters worse was that she was not told of this for a whole year after his death.

Upon being told, filled with grief, rage and wanton revenge she sold all her worldly belongings and bought a T-34/76 tank. It was donated to the Red Army on condition that she was the driver. At 38 she began 5 months training and was then posted to the 26th Guards regiment. At first they were a little wary of this woman doing such an unheard of act. And then she was seen in combat…

The turret of the tank she drove bore the name ‘Боевая подруга’ – Fighting Girlfriend. In this first combat mission, she was seen to be manoeuvring the T-34 around the battlefield like a veteran. She would even leave the tanks driving seat to repair it if hit. This action on her first combat mission saw her promoted to sergeant. Mariya saw many more combat missions in the next year but unfortunately after only a years’ service she was killed in action by artillery fragmentation to the head.

I chose Mariya because I admire her courage and the fact that she was the first female to be awarded The Hero of the Soviet Union award, the Soviet Union’s highest award for bravery in combat.

With two games under their belts, Bernard’s forces are progressing nicely – they have already achieved a few kills, and have acquired their first few skills. 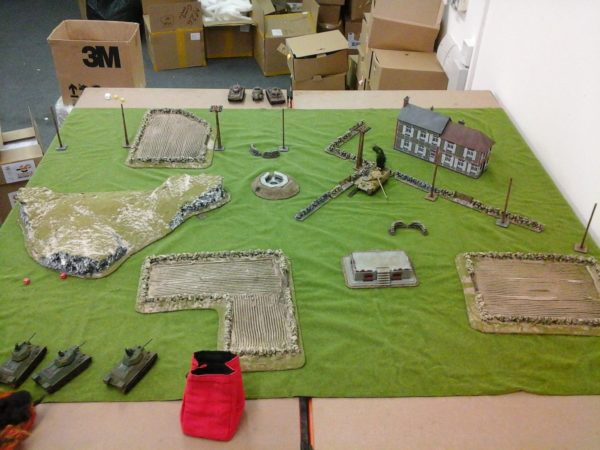 The Flammpanzer is the first vehicle to activate – taking a Run move onto board, heading for cover behind the hill at full pace. The next dice is Soviet – and T-34 number 3 advances onto the board, taking position to the right of the bunker.

Bernard’s Panzer III then appears – taking a Run move onto the board, ending its move near the apex of the hill. T-34 number 2 advances onto the board to the left of the bunker and takes a pot shot at the Panzer III, the shot penetrates the armour and the tank is destroyed – the first casualty of the game. The crewmen burst out of the hatches – though unfortunately the gunner doesn’t make it. First blood to the Soviets! 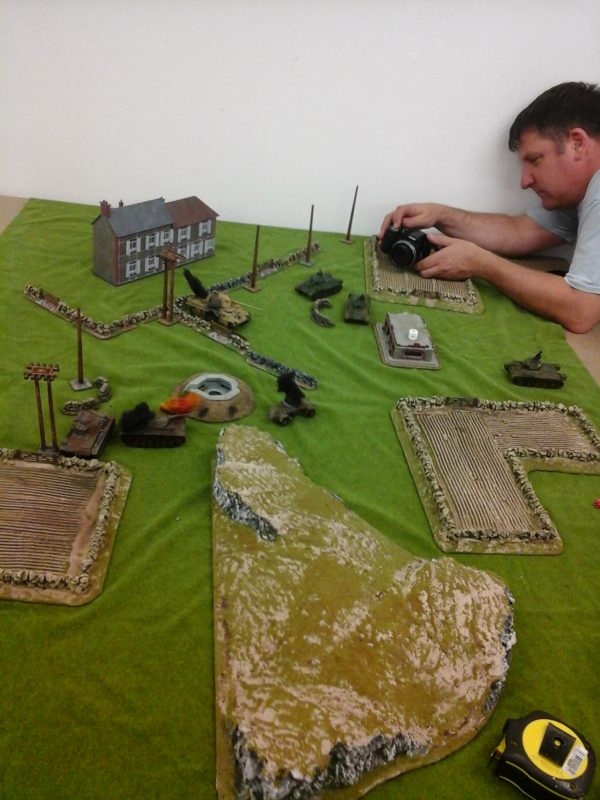 T-34 number 2 begins turn two, goes onto Ambush, and sits in wait for a target to wander into its sights.

Bernard’s  Sd.Kfz 222 makes an advance move along the back of the hill, attracting the attention of T-34 number 3 – the shot misses its target, and slams into the ground just behind the tank, rattling the crewmen.

The remainder of the turn sees a lot of posturing between the sides – the Flammpanzer advances up behind the Sd.Kfz 222, and T-34 number 1 advances behind its comrade, T-34 number 3. 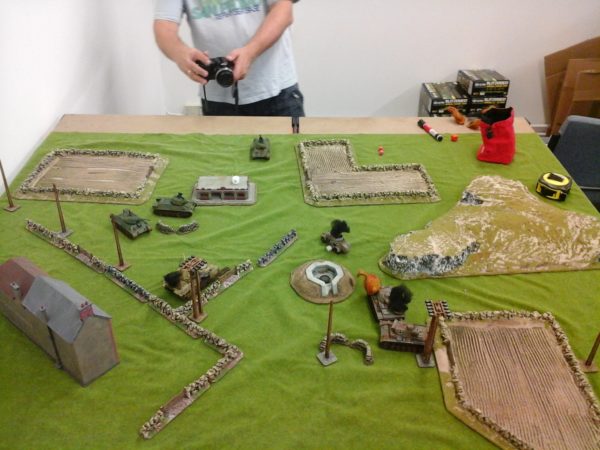 The Flammpanzer advances to fire – inadvertently triggering an ambush from T-34 number 2, but the gunner was a little over-enthusiastic, and the shell whistled over the German tank.

T-34 number 3 advances further toward the objective, taking an opportune shot at the Sd.Kfz 222 – however the shot flies wildly off-target, and only serves to goad the Germans into action… 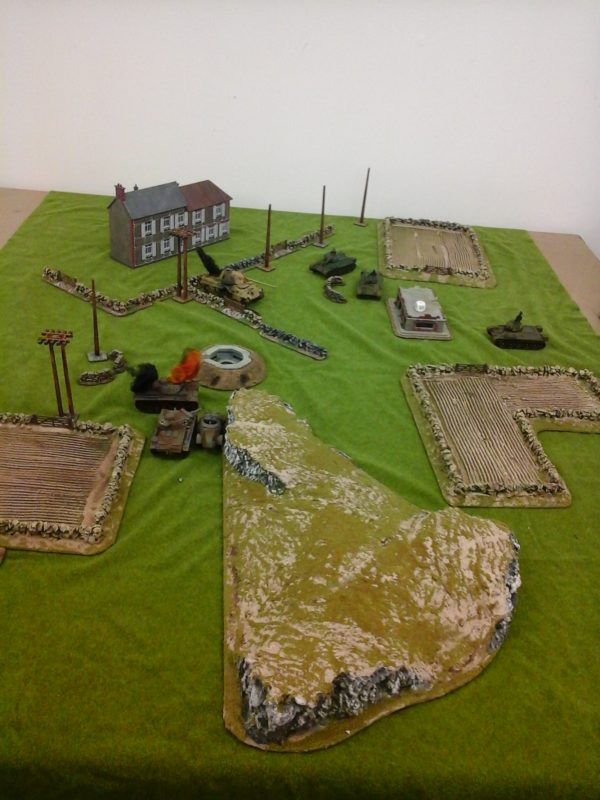 The Sd.Kfz 222 advances to fire on T-34 number 3, but the activity triggers T-34 number 1’s Ambush – the shell cracks against the German vehicle’s armour, and the crewmen inside are left scrambling around, deafened and stunned by the sound of the impact – with a ‘Crew Stunned’ result, the Sd.Kfz 222 is forced to take a ‘Down’ order, and cannot fire – with 2 pin markers.

The Russians take full advantage of the stunned Sd.Kfz 222 – and T-34 number 3 also launches a shot toward the stricken vehicle, managing to Immobilise it, and with 4 Pin Markers, it’s not likely to have much of an impact throughout the remainder of the game.

The turn ends with the Flammpanzer advances to take cover behind the wrecked Panzer III – and with a sinister grin across his face, it looks as though Bernard has something fiery planned for next turn… 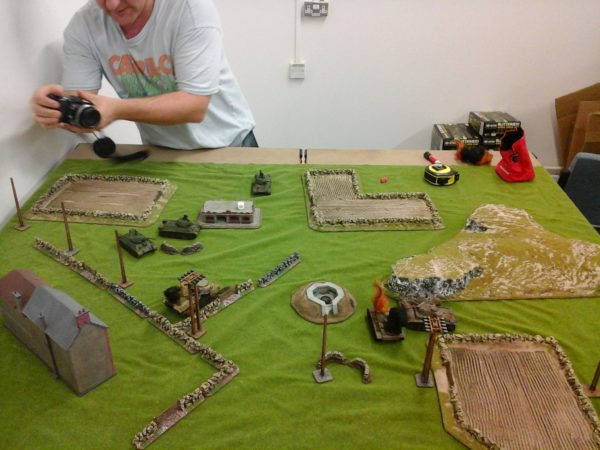 T-34 number 2 advances to point blank range of the immobilised Sd.Kfz 222 and shoots. Having been pummelled last turn, the vehicle errupts into a fireball – fortunately for Bernard, the majority of the crew manage to escape, but the gunner perishes. Vitally for Bernard, his Commander survives, meaning that he maintains his Commander’s ‘Strict Discipline’ Skill.

The Flammpanzer advances and fires at T-34 number 3 – inflicting 11 hits all-together. The Russian tank explodes into a roaring ball of flames. Somehow the crew manage to clamber to safety, and all escape to get to safety unharmed.

The crew of T-34 number 1 seek to avenge their comrades – the tank advances to take cover behind a wall, and shoots the Flammpanzer at point blank range – the shot hits, penetrates, and destroys it. From the smouldering wreckage, the tank crew escape – but the driver dies. 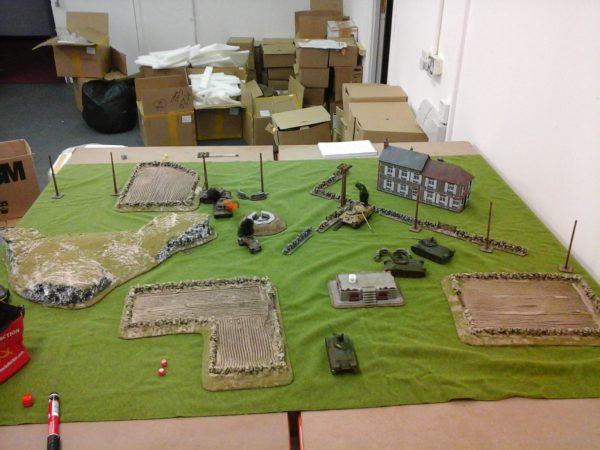 The game finishes in a  victory to the Russians – that pesky Warrilow fella and his beloved T-34s came, they saw, and they conquered! They’re now headed back to his local gaming club to take the fight elsewhere – much to the relief of the Warlord lads!

Thanks to the ferocious damage it inflicted upon the Russians, Bernard’s Flammpanzer is now counted as Regular, and the Gunner has the skills ‘Hair Trigger’ and ‘Adrenaline Rush.’

Another fast, fun, and frantic game – we at Warlord HQ are having a lot of fun with ‘Tank War‘ – and we’ve got plenty more planned – there’s plenty more armoured action to come! 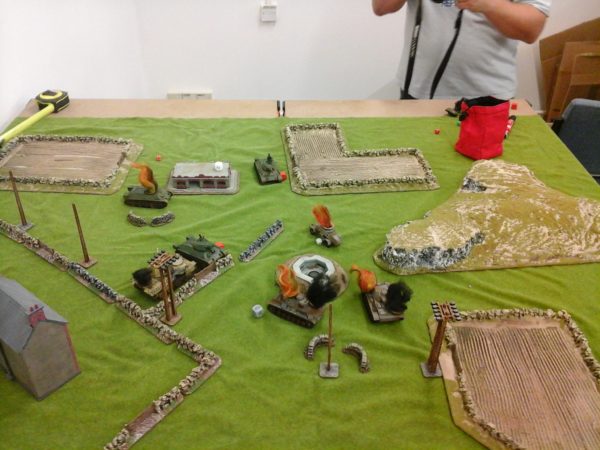