Spotlight: The Queen of the Desert

Renowned for its heavy armour, the Matilda II stormed across battlefields in France and the Western Desert. These infantry tanks played a key role in the Commonwealth’s early victories!

Designed and commissioned in 1936, the Matilda infantry tank was designed to be a lumbering behemoth, impervious to anti-tank guns and field artillery, able to engage enemy tanks with a 2pdr (40mm) gun while suppressing enemy infantry with its machine gun.

With 3.1 inches of armour at the front and 2.95 inches of armour on the turret, the Matilda was able to ignore the majority of contemporary anti-tank weapons, with the exception of the German’s repurposed 88mm anti-aircraft gun.

Matilda tanks on the attack somewhere in the Western Desert.

Its slow speed was not seen as a significant disadvantage – the tank was designed to work very closely with accompanying infantry, assisting them with trench crossings and smashing through fortified positions.

In the opening stages of the Western Desert campaign, the Matilda reigned supreme. The Italian arsenal lacked sufficiently heavy weaponry to disable it, and it was often able to overrun Italian positions without so much as a scratch on the paintwork.

This account from an officer present at the battle of Nibewa sums up the Matilda’s effectiveness during the early stages of the Western Desert campaign.

“These [Matildas] having brushed aside the Italian tanks, burst through the entrance and fanned out across the camp area like avenging furies…. Their 2-pounders had little to fire at once they were in the camp but their machine guns chattered interminably, cutting down anyone who moved above ground, then concentrating on the gun crews as these proved to be the most determined enemies…. Everywhere the Matildas ranged they flushed dazed, frightened but often desperate Italians and Libyans from covered trenches and slits, from open holes in the ground—some without weapons at all, some with weapons which they dropped as they put their hands up … leaving death and disorder in their wake.”

As the campaign dragged on, the Axis armies started to be equipped with the high velocity 50mm and 75mm guns, both on their armoured vehicles and as towed anti-tank guns. With these long-range tank killers in operation, the open terrain of the Western Desert became a killing ground for the sluggish Matilda. 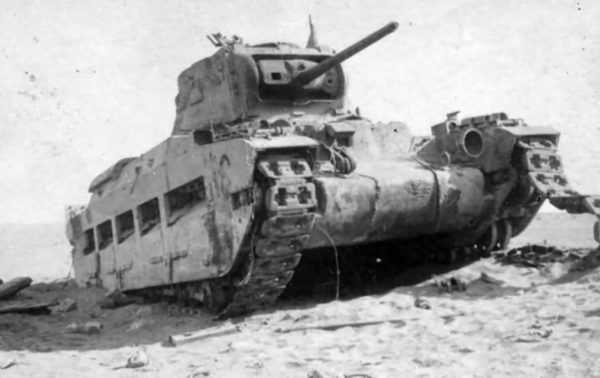 A destroyed Matilda II tank in the Western Desert.

Matilda squadrons suffered heavy casualties during Operation Crusader and the battles around Gazala, where German anti-tank guns flayed the squadrons during their opening attacks.

Despite being rendered obsolescent by advances in anti-tank guns, the Matilda would go on to see service with the Australian Army in the Far East and on the Eastern Front after being lend-leased to the Soviet Union.

The Matilda II in Bolt Action

The Matilda’s profile is pretty representative of its real-life combat performance. Slow and cumbersome, it’s not going to be executing any flanking maneuvres. Better to embed the tank amongst your infantry and use it as mobile cover from small arms during the attack.

Use it to punch a hole in your opponent’s defenses that your infantry and light vehicles can exploit to get around the flank or rear.

If you encounter enemy light tanks, the armament is sufficient to take them on, but you’ll struggle against heavier vehicles like Panzer IVs.

Tom spends most of his time buying books and painting miniatures. He enjoys putting animals on the bases of his miniatures and half-finishing side projects. Some say that he lives in a tower on top of some windswept northern hill with his wife and cow-patterned cat, Spaghetti.
View Profile | View all posts by Tom Mecredy
Frontline Report: Warlords of Erehwon – A Moot Point
Spotlight: Poisoned Point & Ancient Sword