This week, we’ve got a brand new scenario for Blood Red Skies! Protect your lumbering transport as the interceptors come scything out of the sun!

Every major power participating in the second world war undertook paratroop operations of some sort. These ranged in size from a single Douglas C-47 Dakota with a pair of SOE agents in the back, to fleets of Junkers Ju-52 loaded down with apprehensive Fallschirmjäger.

These operations were exceptionally risky endeavours, even when local air superiority could be assured. Parachutes might fail to open, bad weather or enemy fire might cause jumpy pilots to overshoot the target area.

German Fallschirmjägers landing on Crete in 1941.

Another risk was that an enemy interceptor might get amongst the defenceless transport aircraft and shoot it out of the sky, killing both pilots and paratroopers in a blazing conflagration. Friendly fighters were assigned to escort the transports and prevent the enemy interceptors getting through.

This new scenario, written by designer Andy Chambers, allows you to recreate these perilous aerial operations.

If you’re looking to integrate this scenario with a game of Bolt Action, we’ve got some unofficial guidelines for you:

If you’re looking to try out the transport hunt, pick up a set of these beautiful 1/200 scale Ju-52s for your intrepid Fallschirmjäger. Combined with the contents of the starter set, you’ll have enough aircraft to play out the Transport Hunt scenario. 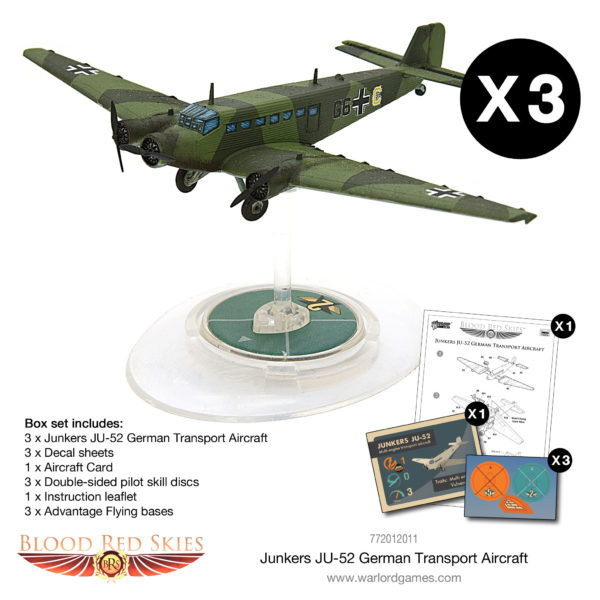 Tom spends most of his time buying books and painting miniatures. He enjoys putting animals on the bases of his miniatures and half-finishing side projects. Some say that he lives in a tower on top of some windswept northern hill with his wife and cow-patterned cat, Spaghetti.
View Profile | View all posts by Tom Mecredy
Spotlight: Statistics to the Rescue
Frontline Report: Erprobungsgruppe 210