Spotlight: The Battle of Bedriacum

On this day 1,949 years ago, 10 Roman legions clashed in the epic climax to a year of brutal civil war and mindless bloodshed. This week, we’re taking a look at the second battle of Bedriacum and the Year of the Four Emperors.

In 68AD, Emperor Nero found himself very short of friend and allies, both in Rome and in the wider empire. Unrest fomented across the provinces of Gaul and Spain, with the governor of the latter, Galba becoming the figurehead of the rebellion.

In June 68, Nero took his own life after receiving a report that the Senate had ordered his execution. He was posthumously declared an enemy of the people, and the Praetorian Guard oversaw the transfer of power to Galba.

Galba rewarded his erstwhile allies in the Praetorian Guard and Germanic legions by replacing their commanders with his own cronies. His popularity continued to wane among the common people by imposing huge fines on towns that refused to accept him immediately. His paranoia alienated the nobility as he executed any potential threats, often without trial. 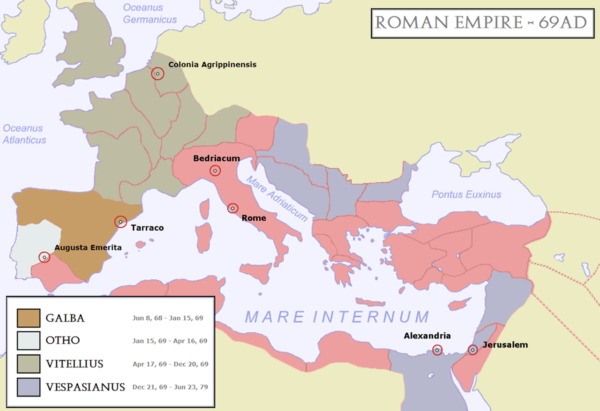 The Roman Empire during the Year of the Four Emperors

His spiralling unpopularity led to the revolt of the Germanic legions, who proclaimed their commander, Vitellius as emperor. Panicking, Galba nominated a young senator as his successor, making a powerful enemy in the influential Marcus Salvius Otho.

Otho bribed the Praetorian Guard and had Galba cut down in the forum, along with his heir.

On the very same day, Otho was proclaimed as emperor by the Senate. Many across the Empire breathed a sigh of relief, as he was expected to bring some order to the chaos. The main challenge to his authority was the self-proclaimed Emperor Vitellius and his legions of battle-hardened veterans.

Vitellius smashed Otho’s forces at the first battle of Bedriacum. Rather than prolong the struggle, Otho committed suicide.

Vitellius immediately set out for Rome, where he immediately established himself as yet another tyrant. Lavish banquets and triumphal parades quickly depleted the treasury and accrued massive debt. Vitellius settled his debts by murdering his creditors and anyone who dissented.

Meanwhile, the legions in Judea and Syria had acclaimed their commander, Vespasian. He had been dispatched by Nero to put down the great Jewish revolt and gained the support of the Syrian governor. After securing the grain supplies at Alexandria, he marshalled his forces and marched on Rome.

At the same time, the Danubian legions under Marcus Antonius Primus declared for Vespasian. With a much shorter distance to Rome than Vespasian’s legions, Primus’ advance made much greater progress, before being checked at the second battle of Bedriacum.

The Second Battle of Bedriacum

Five legions stood between Antonius and the Roman capital. He advanced south from his camp at Bedriacum, towards the city of Cremona. When his advance guard of cavalry encountered the enemy, battle was swiftly joined.

Despite being outnumbered initially, Antonius sent back to Bedriacum for the remainder of his force. Driving forward, his veteran Danubian and Germanic legions forced the enemy to retreat to the ground outside Cremona, where the battle would continue well into the night.

During the night, Antonius’ own legion would lose its eagle, only for it to be recovered by the suicidal bravery of one of its centurions. By dawn, the Vitellian army was completely spent and was destroyed along with its fortified camp and the town of Cremona.

With the way clear, Vespasian and his forces entered Rome. Despite the resistance of the populace and the last desperate schemings of Vitellius, he was proclaimed Emperor and Vitellius was executed by being thrown down the Gemonian stairs.

Bedriacum and the Year of the Four Emperors in Hail Caesar

For those of you with extensive collections of Imperial Romans, games set in one of the most turbulent years in Roman history are a great way to get those models on the table.

Imperial Roman troops are remarkably tough, with a Clash and Sustain value of 7. This makes your battle line particularly potent, with a whole range of cavalry, artillery and skirmishers to add some tactical flexibility.

While this excellent stat-line is useful against barbarian units with high Clash and low Sustain, against other Romans its likely engagements will devolve into a pushing and shoving match between well-matched foes. You’re better off using your auxiliaries and skirmishers to exploit weaknesses in the enemy formation and seize objectives.

The period is ideal for smaller scale skirmish games, as it’s packed with street fights, brawls and assassinations. We’ll be looking at expanding on this in a future article, so keep your eyes peeled.

Getting Started with Early Imperial Romans 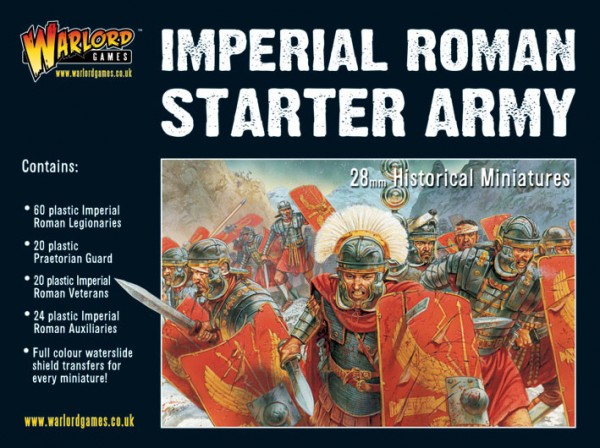 This starter box gives you a huge variety of plastic models to build your Roman army. If you’re looking to recreate smaller battles, you could even field both armies straight out of the box. Grab it from the webstore today!

Tom spends most of his time buying books and painting miniatures. He enjoys putting animals on the bases of his miniatures and half-finishing side projects. Some say that he lives in a tower on top of some windswept northern hill with his wife and cow-patterned cat, Spaghetti.
View Profile | View all posts by Tom Mecredy
Frontline Report: Death in the Desert!
Frontline Report: Painting for Waterloo Replayed!