Jeremy Williams of the chefofwar blog recently got in touch, reporting on the action from this year’s Adepticon Bolt Action tournament…

Adepticon has come and gone again. With it, all the fubars, out flanking, and last turn heroics anyone could handle. The Bolt Action at Adepticon included, Tank Wars, Combat Patrol (a small point value event) a team doubles event, and the first US Nationals. My team and I were proud to host this event; it makes it worthwhile knowing people had a great time.

Results for the Team and US Nationals can be found here. www.chefofwar.blogspot.com

Some background on the event and format. The Team doubles had two partners, each bringing an 800 point generic reinforced platoon while not combing for more than 16 order dice. We had preset matchups for each round to allow for more historical games; no swiss system for this event. We had 20 teams show up day of. You may see some photos of multiple armored vehicles, in the doubles we allowed 1 armored platoon! This format and structure was in contrast to the Nationals.

The breakdown for the team doubles event was a majority of German forces with the British and Americans close behind. Some French, Italian, and Finnish rounded out the minor powers.

For the US Nationals players brought a generic reinforced platoon at 1,250 points, again 16 order dice maximum. This helped ensure games would finish since this was the first year increasing the point value from 1000 points. We sold out the event at 48 tickets and had 40 players arrive to roll dice.

The army break down for the Nationals was as follows

This event had a Swiss pairing system based on battle points after each round. Players ranked their opponents on sportsmanship after each round. Armies were judged on painting and theme check lists. All these combined for a weighted overall score. Again, results for both events can be found here

For both events we mixed up some custom mission goals into the standard book missions, while also adapting a major/minor victory clause. Players had a great time with the tactical options.

Our proudest achievement at Adepticon is the level of terrain and I hope that it comes across from the pictures. Many thanks to all our sponsors, supporters, and amazing community for their hard work, time, and effort. If anyone is thinking about coming out to the windy city, Adepticon 2017 is the time to do it!

If you have a more local event let us know your plans and ideas over on the warlord forum or drop us a line with details at: info@warlordgames.com

Want to get into Bolt Action?

Check out our easy entry, full of how to start information, web page here: 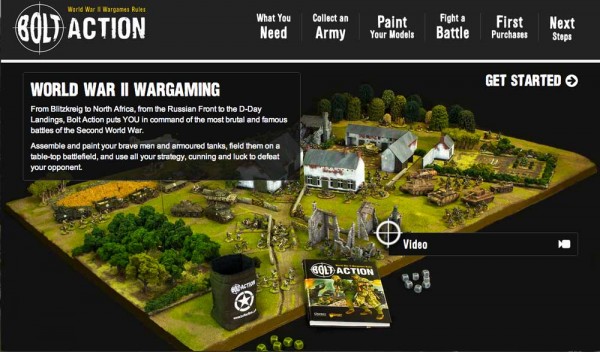 See you at your local store, club, or event soon!